“By the Nines,” Niyleen said gripping her head in pain.
“Are you okay?”

Lucari went to console her, but Niyleen waved her off and rubbed her forehead. “It’s… it’s nothing. Just a headache.” Lucari eyed her questioningly but Niyleen gave her a playful jab to the shoulder and said, “I’m fine.” 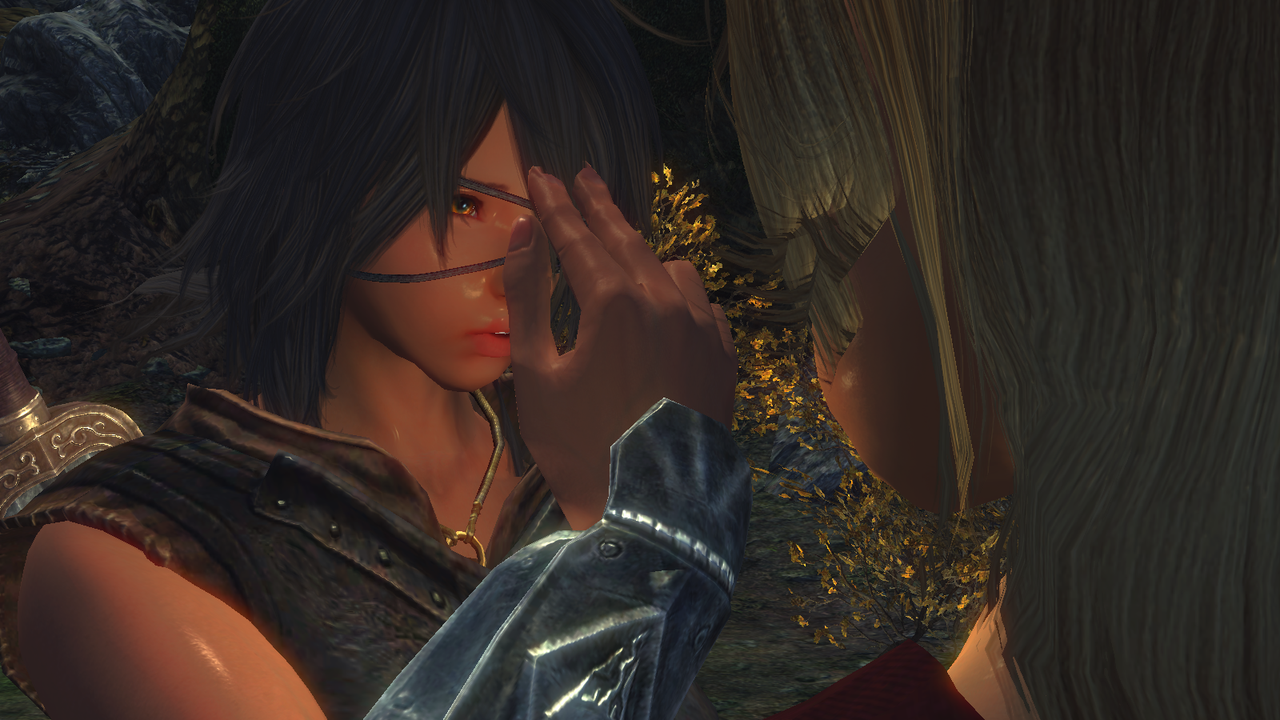 Before Lucari could protest again, Niyleen started off again. They were getting closer to Markarth and further from the Forsworn with each step which by itself was a problem disguised as a blessing. Markarth was something of a safe haven in the Reach—at least from the Forsworn. However, Niyleen didn’t know whether or not trading the Forsworn threat for the tyranny of the Silver-Bloods was worth it.

Niyleen kept up her furious pace, less because of her fears of the Forsworn and more because she was desperately trying to avoid Lucari’s questioning. For minutes now, she had been calling for her, but Niyleen had ignored the poor girl. It wasn’t until Niyleen stopped to survey the land that she was forced to deal with the Nord.

“Niyleen, what’s wrong with you?”

She started off again but was stopped by Lucari gripping her shoulder. “Niyleen, tell me. What’s wrong?”

“Nothing!” Niyleen turned to run but was struck with a sharp pain in her head that felled her to her knees.

“This is nothing?” Lucari said kneeling down beside her.

“I just…” Niyleen could barely breathe. It felt like she was being choked by an invisible hand. If she could she would just fall out here and now, but with them so close to Markarth, she had to at least get her companion within the city gates. 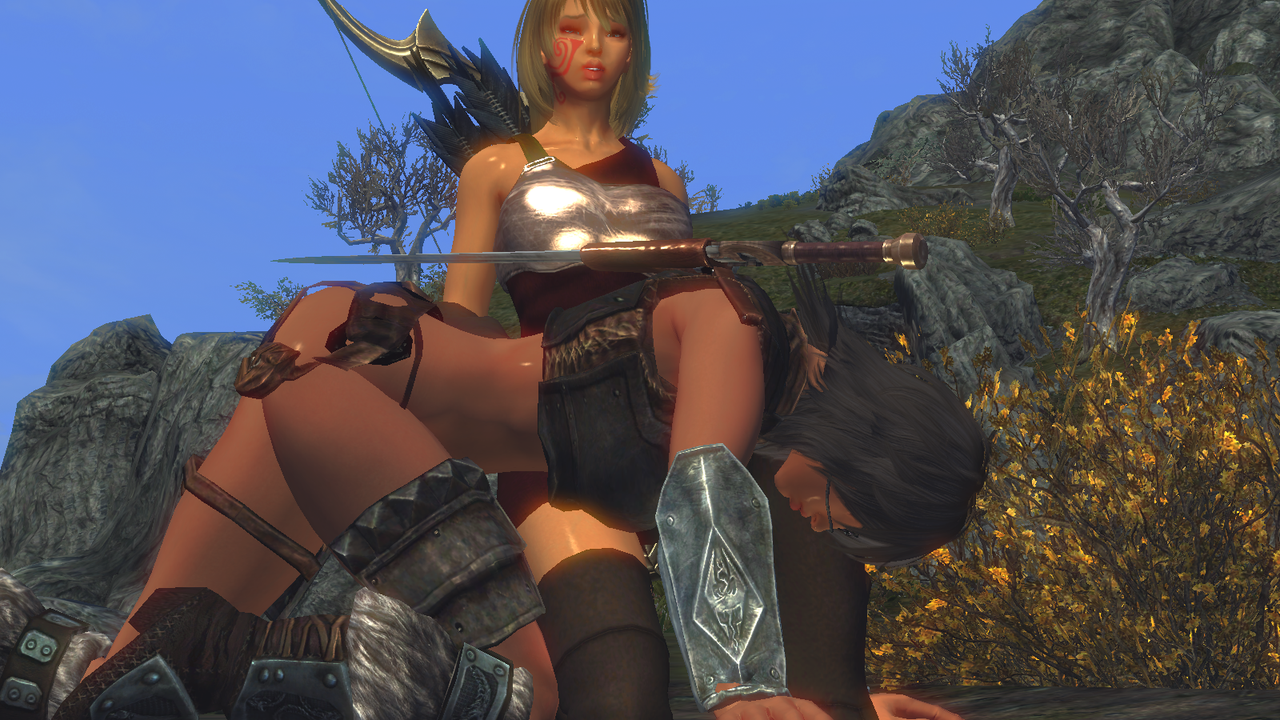 “It’s nothing at all.” Niyleen said when she was finally able to gather her composure. “Now let’s go. Markarth is just across this bridge and up the hill.”

Lucari said nothing and followed silently until Niyleen abruptly stopped after crossing the bridge. “What’s wr—”

“You can see the city from here,” Niyleen said. She was winded, but in a few minutes she could finally rest. “There are a bunch of guards about so don’t attract any unwanted attention to us. Not until you see the Jarl.” 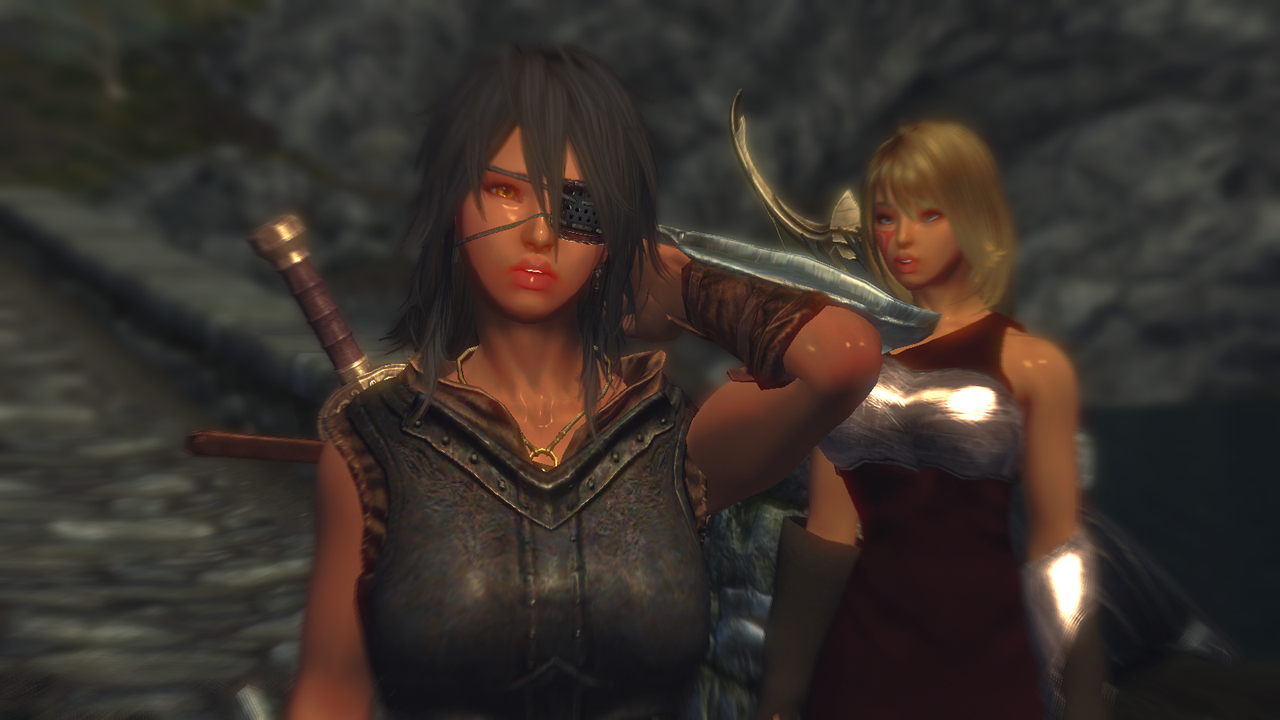 “Got it,” Lucari said, more worried about her friend than fulfilling her dream. 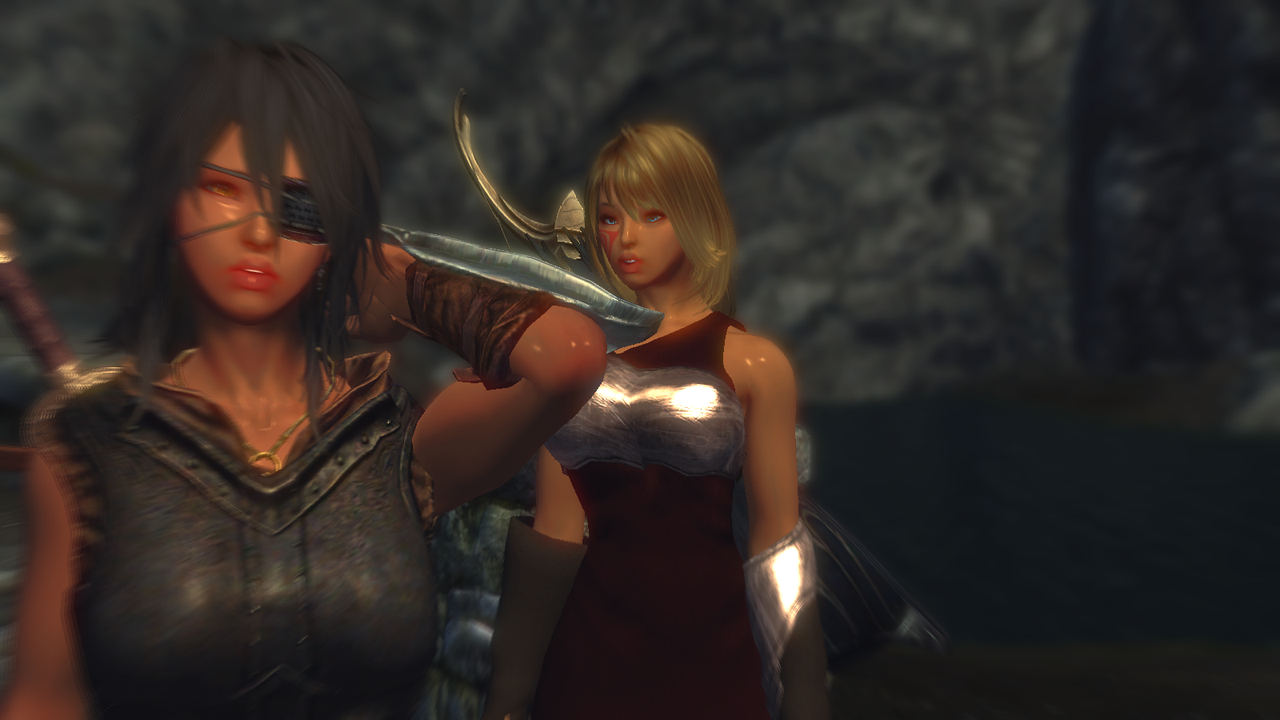 A few minutes later, they arrived just outside the city.

“And this m’lady, is the City of Markarth. Home of the Silver-Bloods and the best prison in all of Skyrim, Cidhna Mine.” 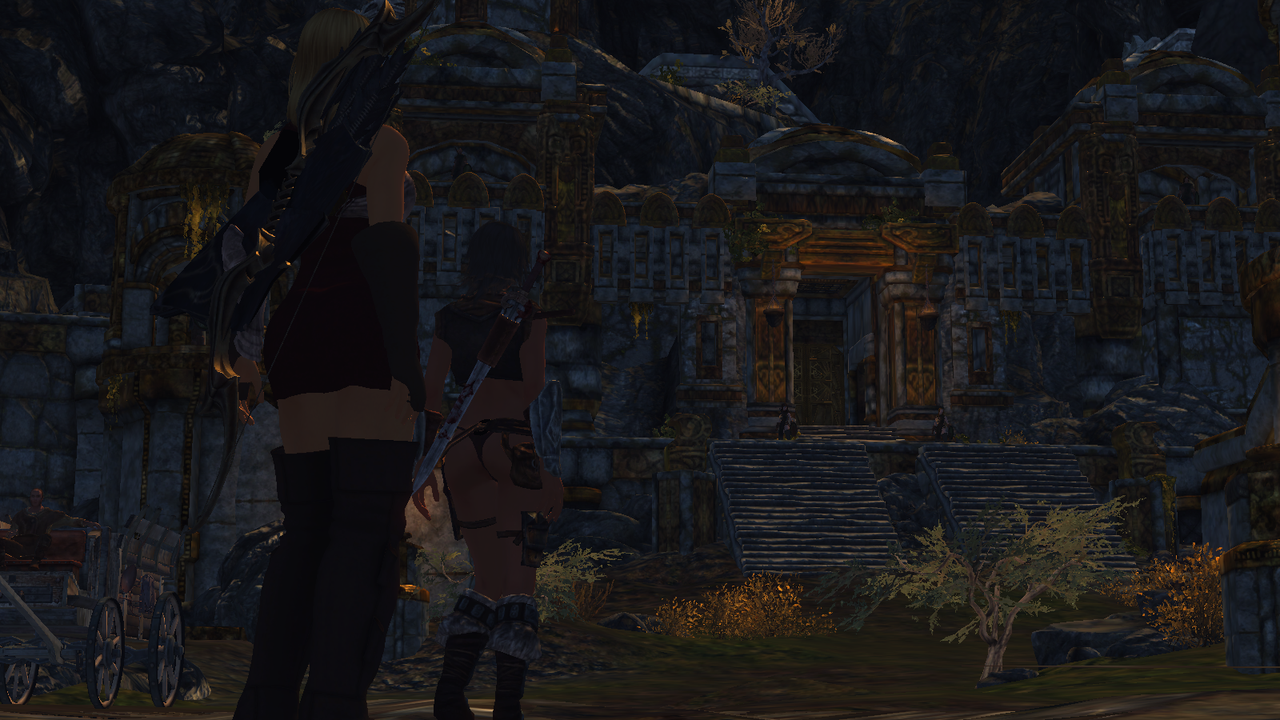 “H-hey now, don’t go getting all star-struck on me girl,” Niyleen said. “Those wide eyes are a real problem in Markarth because they see too much. Kept them narrow and low, and we’ll do fine here.”

Niyleen didn’t know whether Lucari heard her or not, but she continued on because the pain, now in her left eye, was getting to be unbearable. 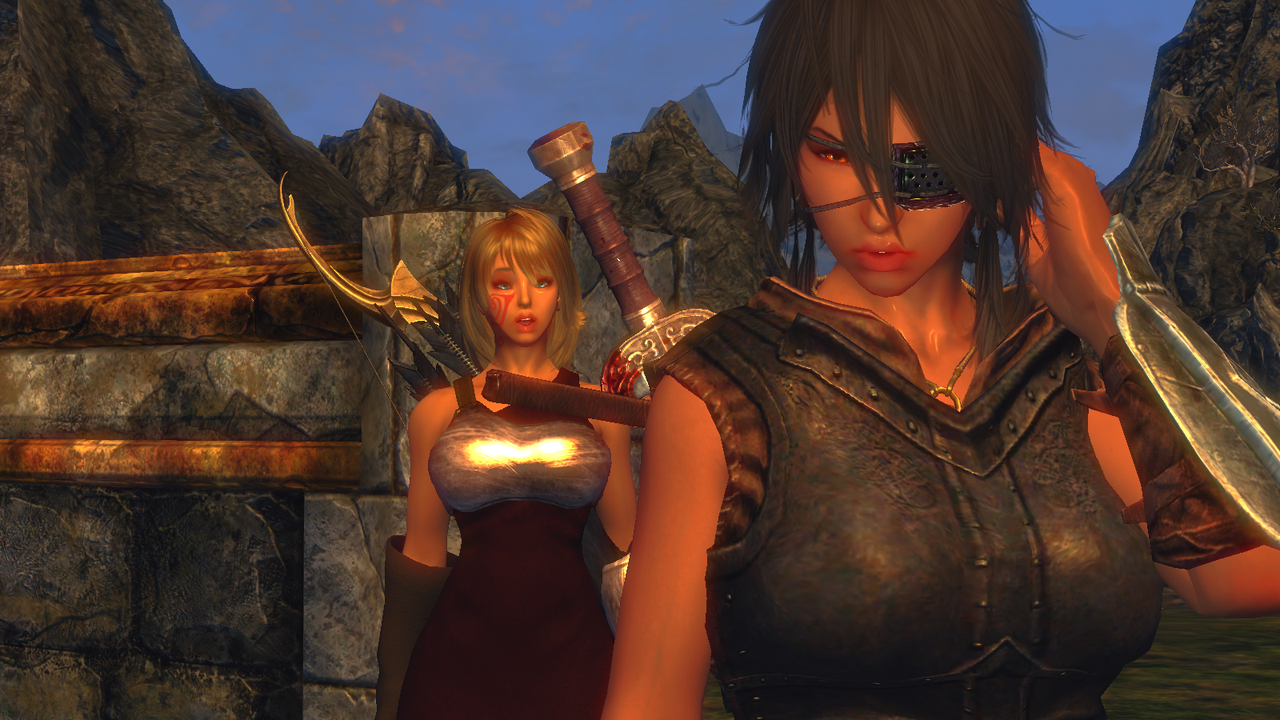 Coming up on the city gate, Lucari said in bewilderment, “For the love of Talos that’s the biggest door I’ve ever seen!”

Niyleen laughed. “Then you need to get out more.” Then the two entered the city. 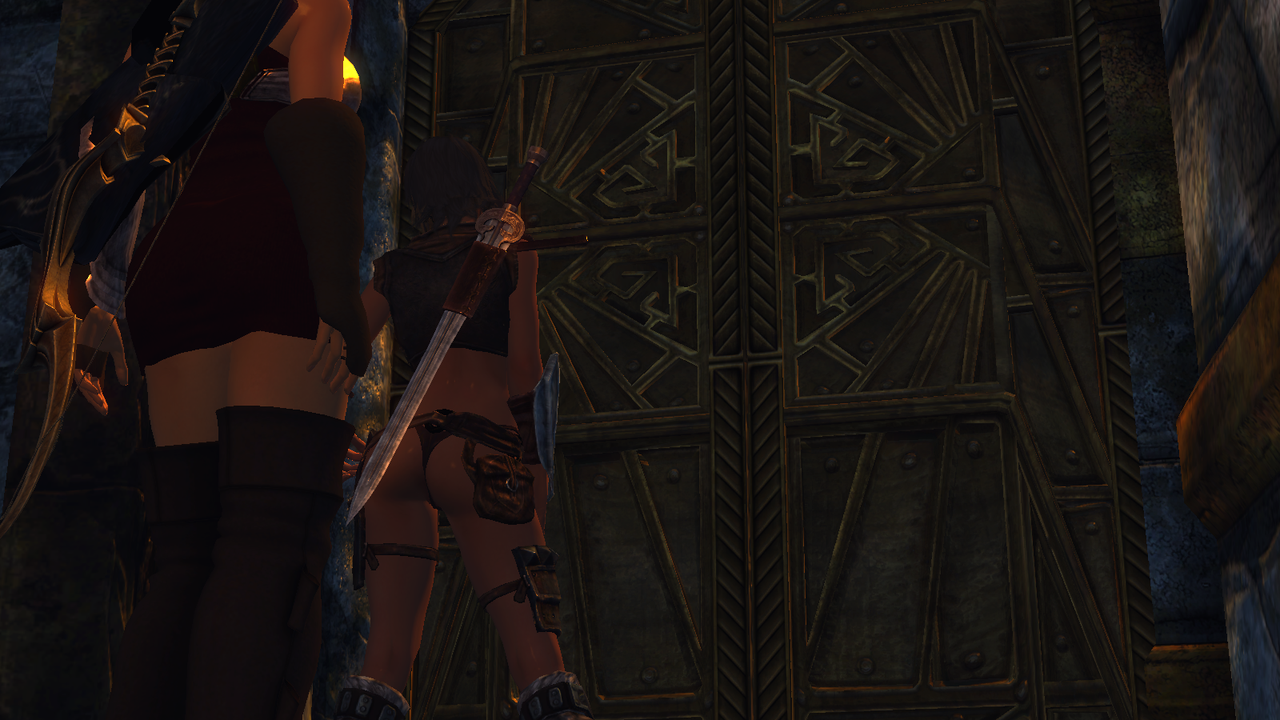 As soon as they entered the town Niyleen could tell that something was amiss. It was too calm, too peaceful, but even then she could tell that there was a major source of blood-lust coming from someone. She looked about frantically hoping she could prevent any mass panic, and also score some points in Lucari’s book. It didn’t take her long to find the source and she was surprised at who it was.

“Is that… Weylin?” she said taking note of the dagger wielding Breton. 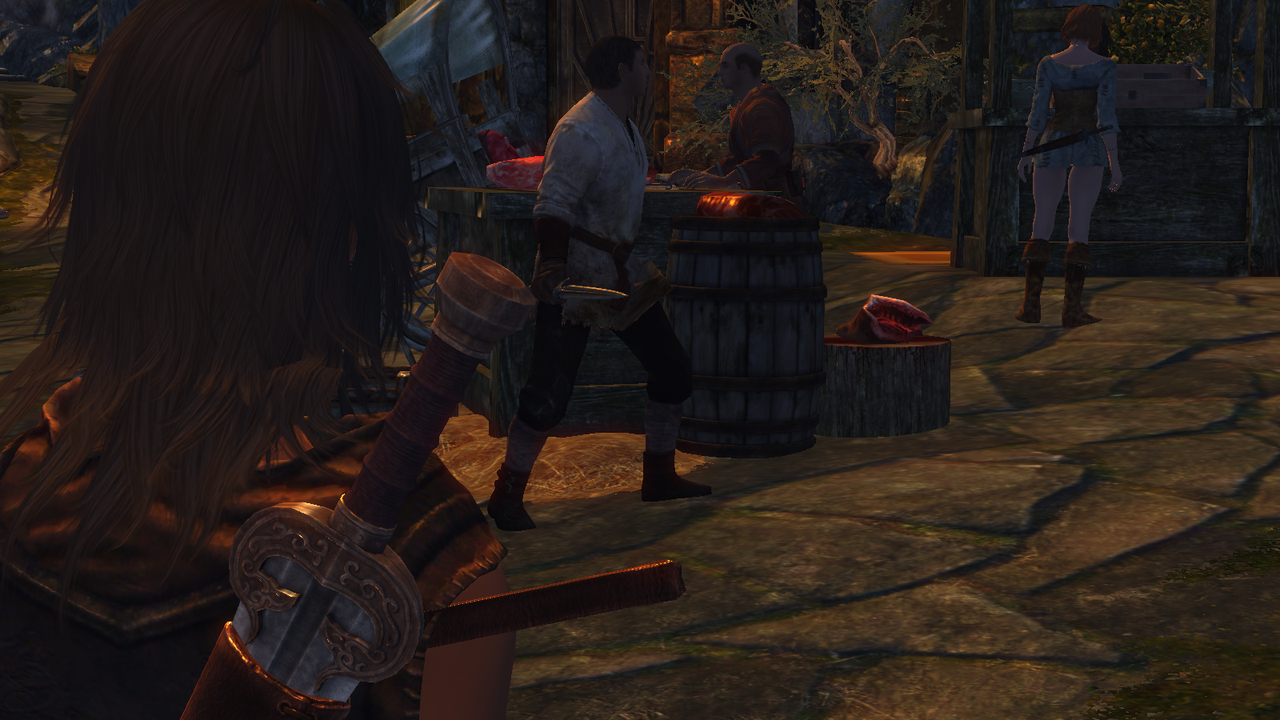 The Breton crept past the butcher and closer toward the woman buying expensive looking jewelry. When he was two sword lengths away from her he shouted, “THE REACH BELONGS TO THE FORSWORN!”

Pushing through the pain, Niyleen reacted. She drew her blade, ran to the Breton and thrust it into his chest before he could take another step toward the woman.

Weylin looked down at the blade pertruding from his chest and said, “I die… for my people…”

Niyleen withdrew her blade from his chest and cut him down, and down went another problem from her past. 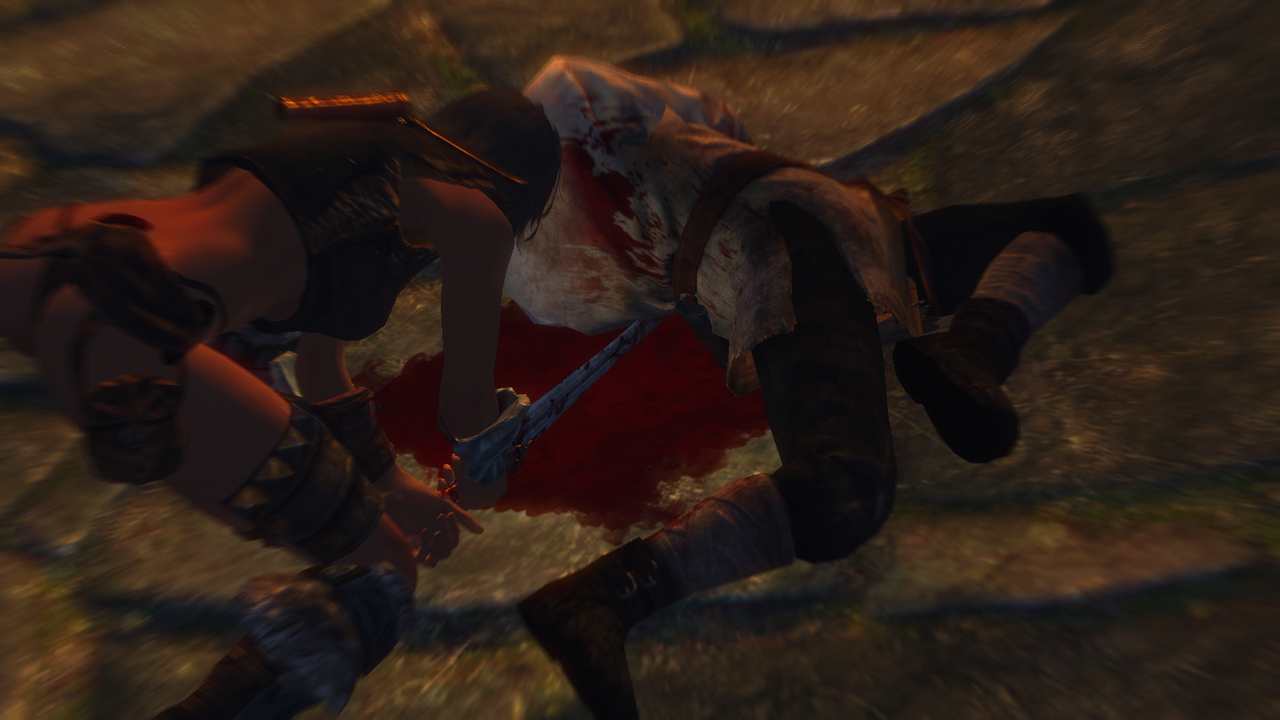 When it was all done Niyleen thought to herself, (Didn’t I warn Lucari about attracting unwanted attention? What am I doing…) She went over to the woman that was almost killed and said, “Are you okay?”

“By the gods, that man nearly killed me," the woman said with a tear in her eyes. "You saved my life.”

“Margret, and thank you. Take this,” she handed Niyleen a necklace. “Here, I was going to bring this to my sister, but I think you should have it. You know, for saving me and all."

Niyleen stuck her hand out then stopped. (What am I hesitating for? I’m a bandit at heart. Relieving people of their valuables is what I do.) Ultimately she took the reward and thanked Margret before heading back to Lucari. 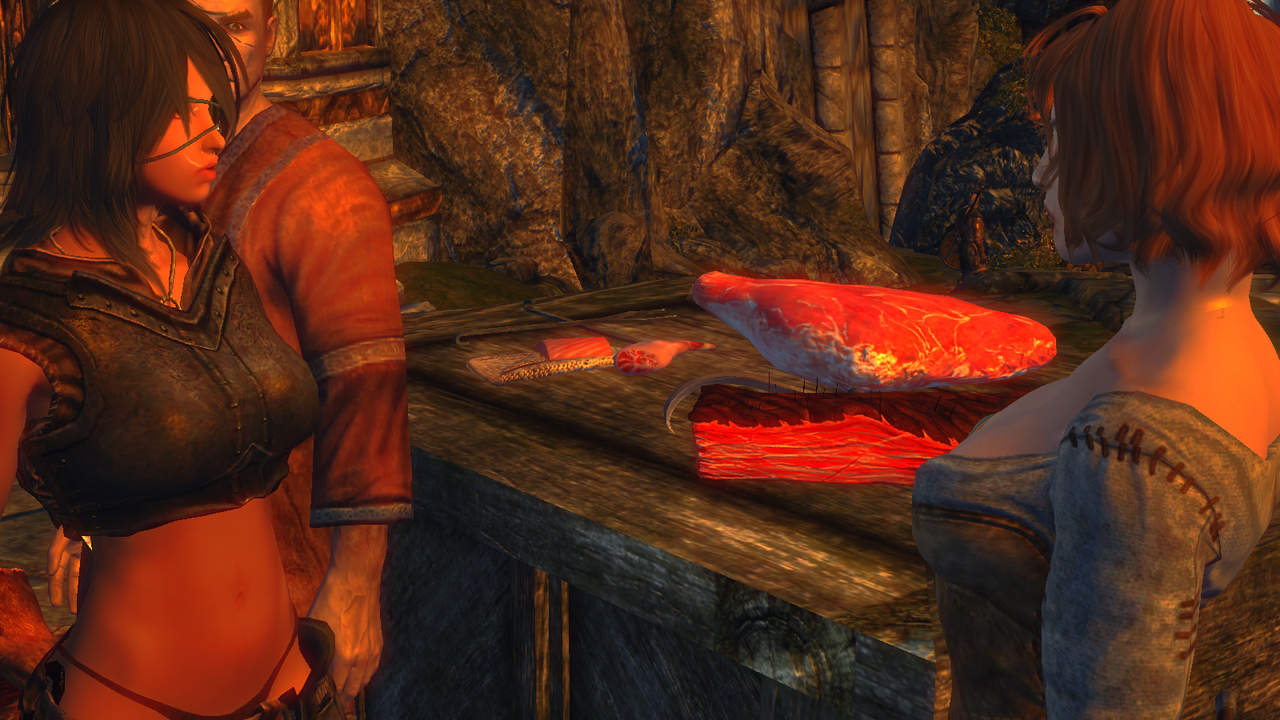 Lucari looked very distressed as Niyleen approached. “Why did you—”

“That man was a Forsworn,” Niyleen said.

She explained the situation and watched as Lucari’s face became more and more relaxed until that bright smile she always wore was right back where it belonged. “I guess… I was really wrong about before.”

“What are you talking about?”

“Remember when I said, ‘how is killing people helping anyone’? I think I understand now.” She grabbed Niyleen’s hands. “You were right. I really am a milkdrinker just off her mother’s teats, but even still…” She looked around at the scene before her and frowned.

“Where are… the guards?”

As if summoned, a guard walked up to the scene and said, “Okay everyone, no lollygagging. We’ve got everything under control. Nothing to see here. Go on with your day.” 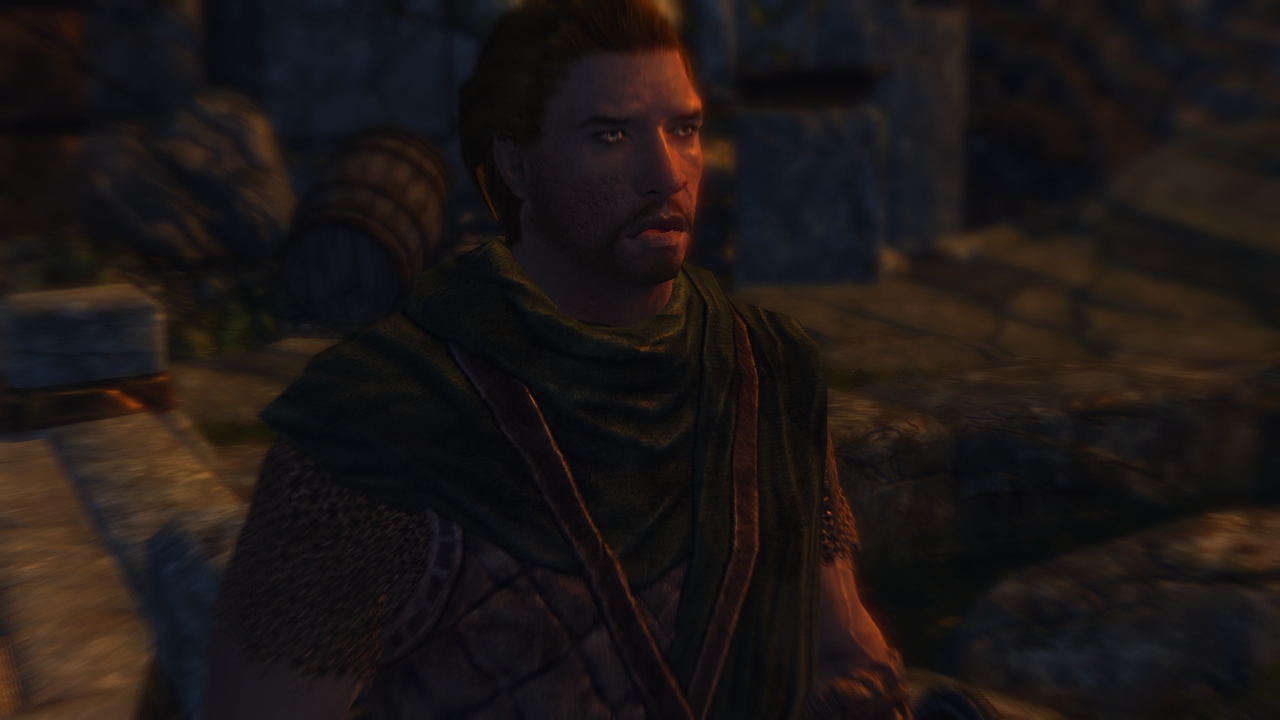 Lucari walked up to the guard with a huff and said, “Are you serious? A woman almost gets killed out in broad daylight and you say that you’ve got everything under control? What control? You let a Forsworn into the city!”

“Whoa there outsider,” the guard said. “I don’t know who you think you are, but it’d be best for your health if you stopped asking questions and listened to what we said.” Niyleen walked up next to Lucari and the guard said, “Great, now here comes more trouble…”

“Niyleen, the guards say they’ve got everything under control when clearly the Forsworn have breached the city walls. Don’t you think that we should report this to the Jarl or something?” 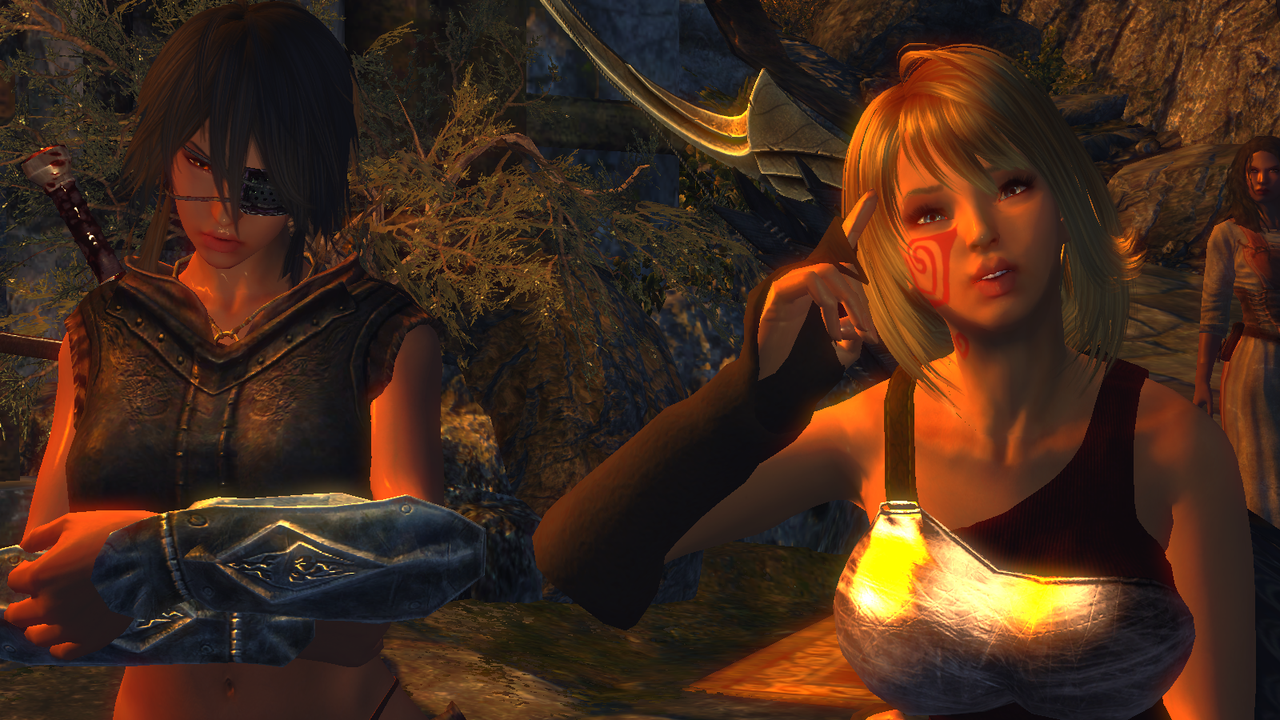 Niyleen walked up to the guard and said, “I’m sorry for my friend’s rudeness. We’ll go about our way now. Sorry to bother you.” 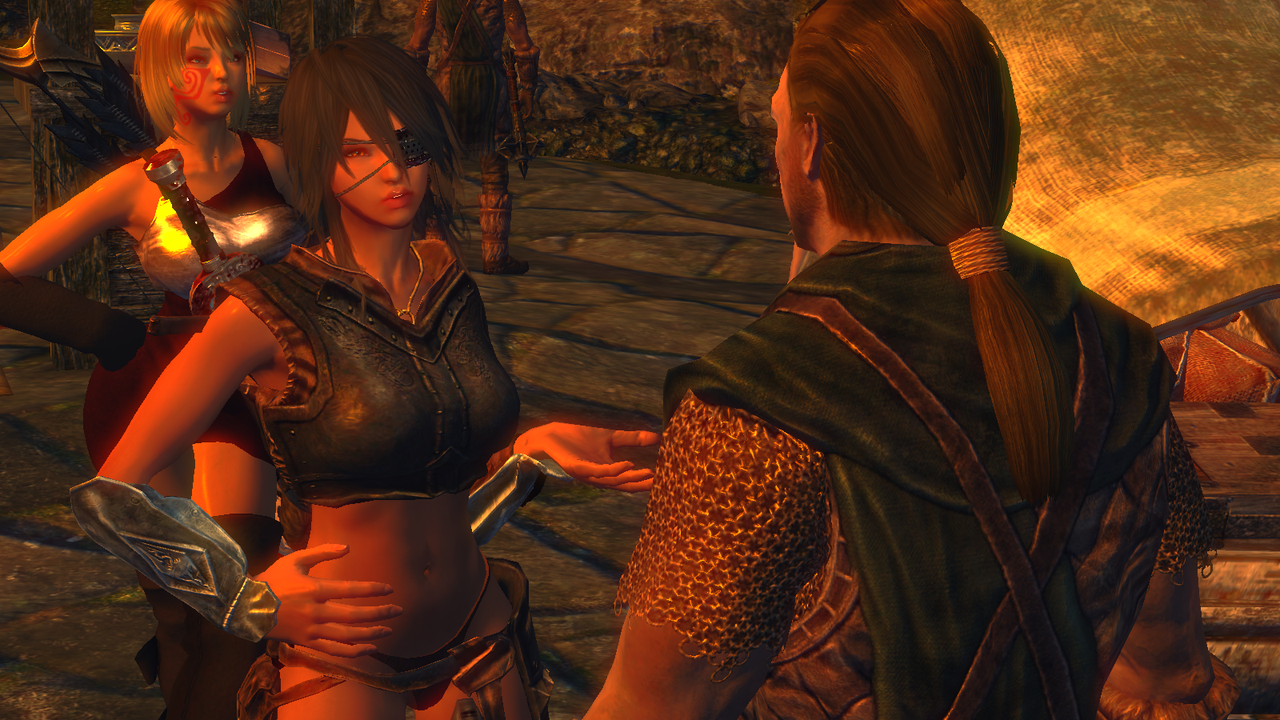 Lucari pushed Niyleen out of the way and began to let the guard have it. She questioned him about the security of the wall, the city, the integrity of the guards and if this incident would even be looked into. She smelled a cover up but even she knew better than to outright confront the guards with such accusations. However the guard continued to duck and dodge her questioning, warning her about Cidhna and how people like her usually end up there. 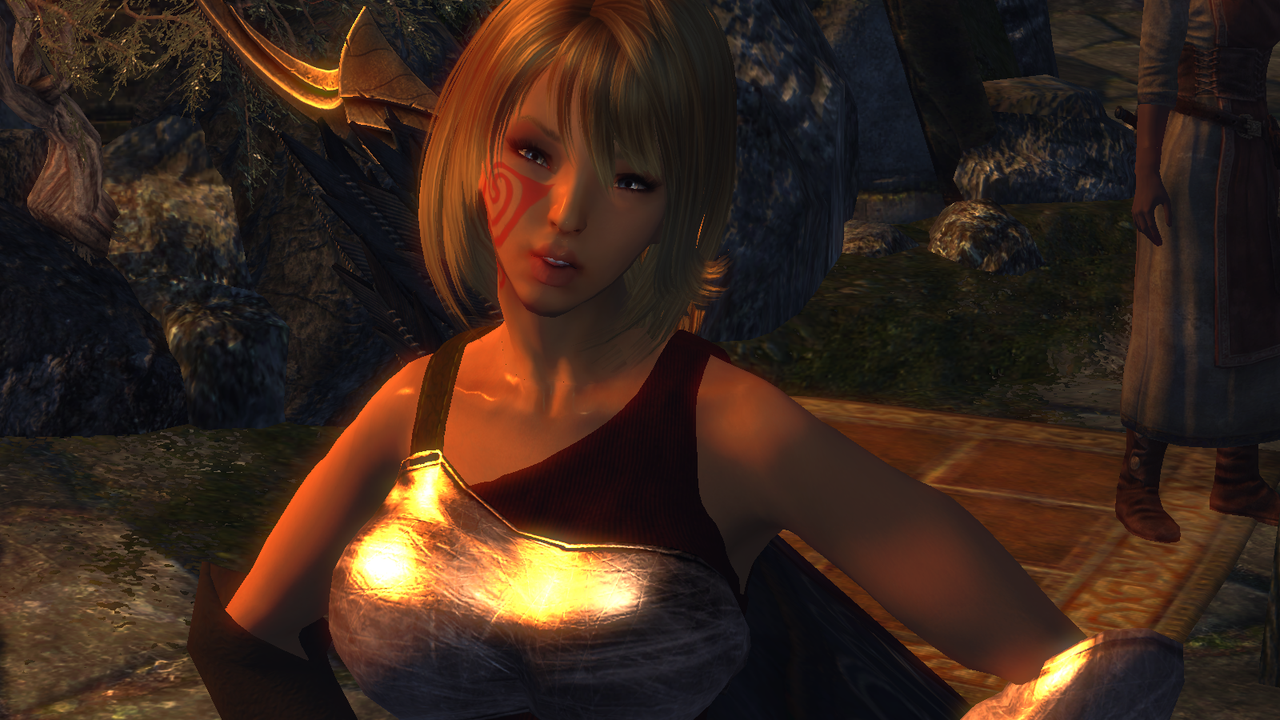 Meanwhile Niyleen was feeling weak. (What the hell did you do to me Eolri…) Her legs were shaky and her eye was hurting more than before. Before she knew it, her knees buckled and her head hit the ground hard knocking her unconscious. 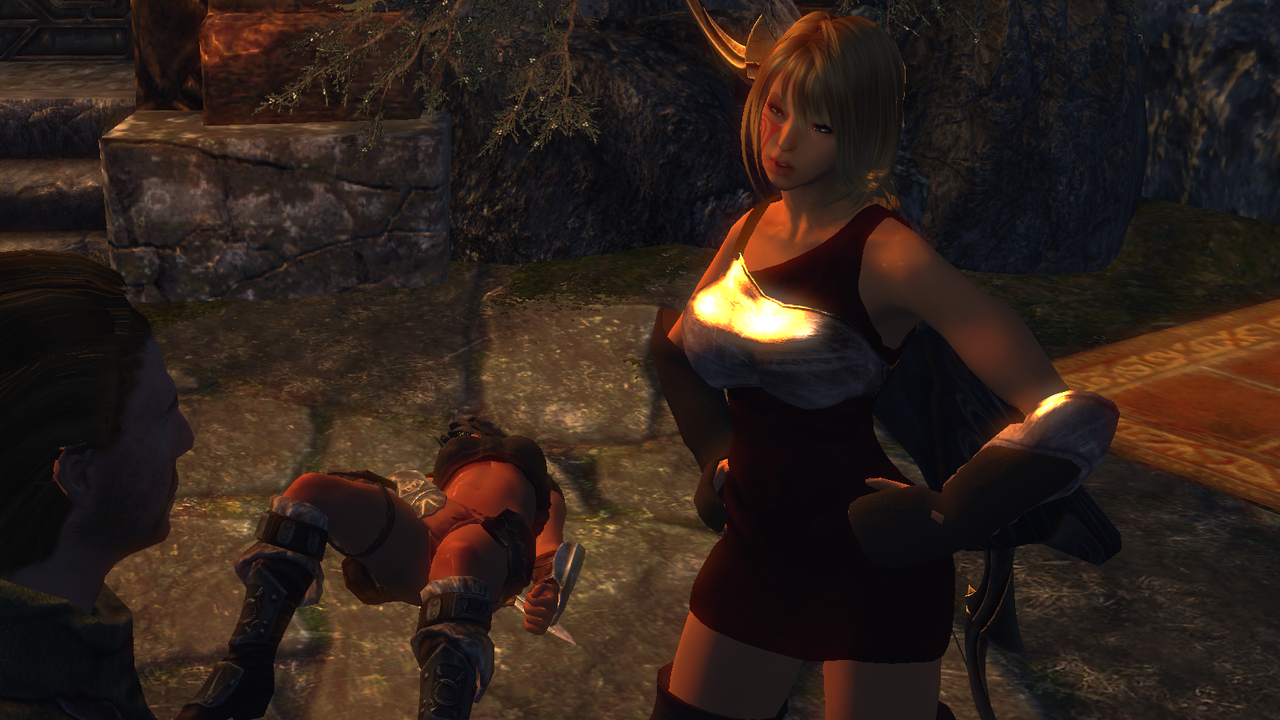 “And another thing,” Lucari continued angrily. “What are you going to do about—”

“Bite your tongue outsider,” the guard snapped. “I’m sick of your noise and by the looks of things so is your friend.”

“Huh?” Lucari looked toward Niyleen and turned pale. “Niyle! W-w-w-what happened!?! Why didn’t you tell me what was wrong with you? Why didn’t you…”

“Ysmir’s beard do you ever shut up girl,” the guard complained.

Lucari shot him a fierce glare, and then gave Niyleen all her attention. “Nevermind him, I’m going to get you some help, so hold on.” 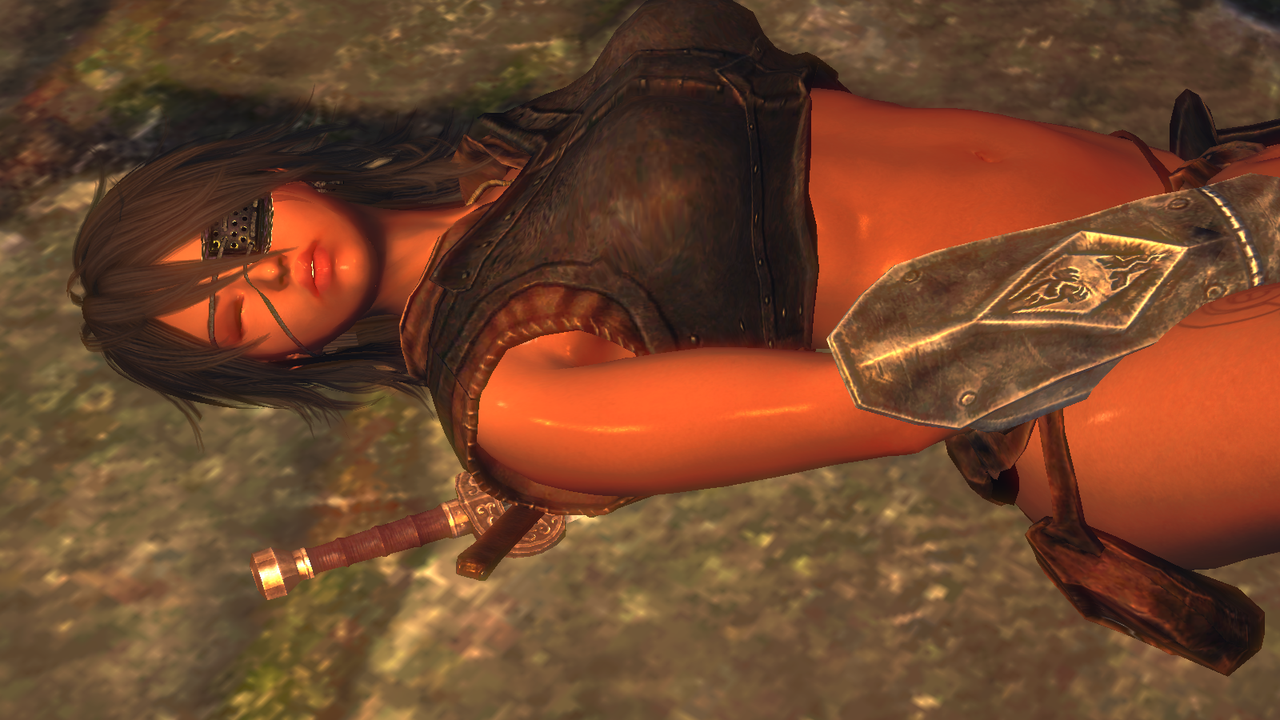 Niyleen awoke serveral hours later on a rather cold and hard surface. “Oww…” she cried as she got up. “I feel like a giant hit me in the back of my head… Huh?” She noticed Lucari on the floor chanting something. “What are you doing girl?”

“Praise the gods…” Lucari said sounding both sad and happy at the same time. 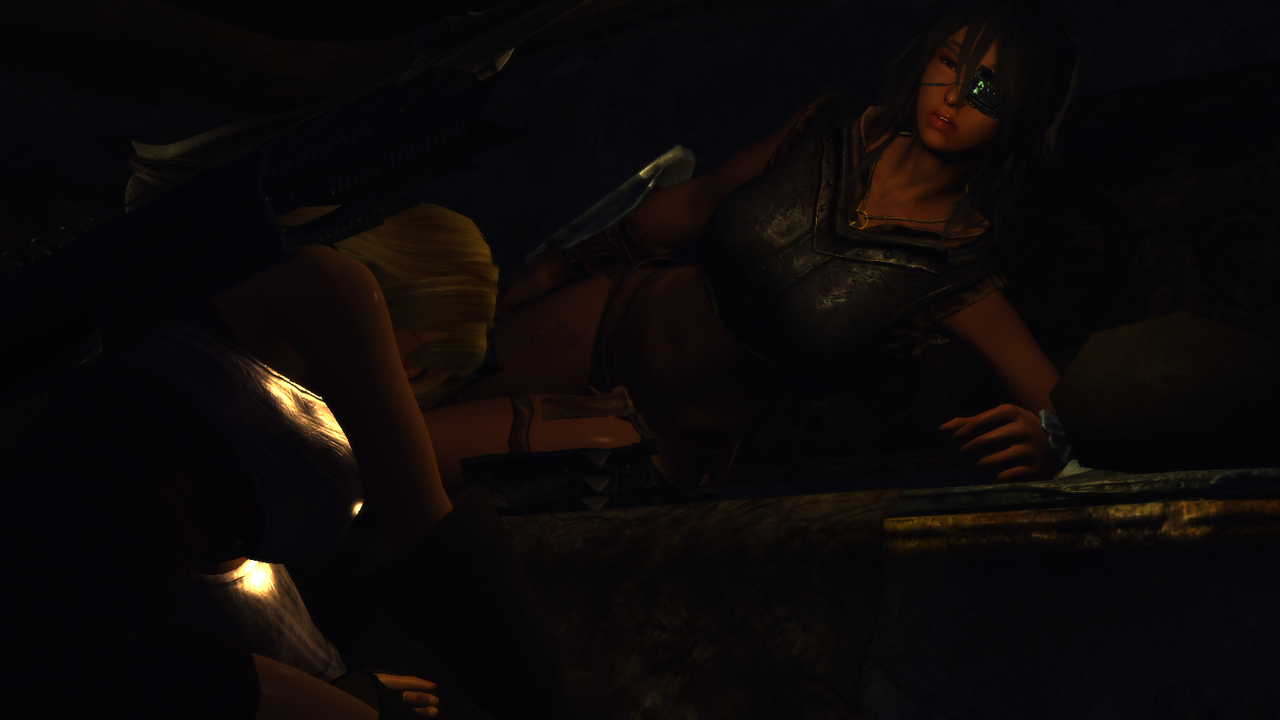 She wiped her eyes and gave Nilyeen her patented smile. “So how do you feel?”

“Better…” Niyleen gripped her head in pain. “But still terrible.”

“Ehehehee. You would be feeling a whole lot worse if it wasn’t for the innkeeper’s wife. She’s a good cook, and reminds me of my mother.”

“Innkeep—Kleppr! Lucari, where did you get the money for this? Do you even have any money?”

“Not a Septim,” she grinned. “I used some of the money you had on you for room and board.”

(Julianos… give me strength.) She gripped her head again, but this time from frustration. “You… you did what now? I clearly didn’t hear you correctly.”

“I used some of your money,” Lucari innocently repeated. “I’ll pay you back when I can, but I needed to get you help and I couldn’t do that out on the street.”

“How much did this all cost?”

“Hmmm…” Lucari thought it through for a moment. “Well, the room was a seventy five for a day. Um… food was an additional forty. Your treatment was a hundred seventy five, and I needed some health potions…”

“I’d rather be dead…” Niyleen mumbled.

Lucari didn’t notice. “Hmm… all in all, I’d say it was three hundred and seventy Septims.” 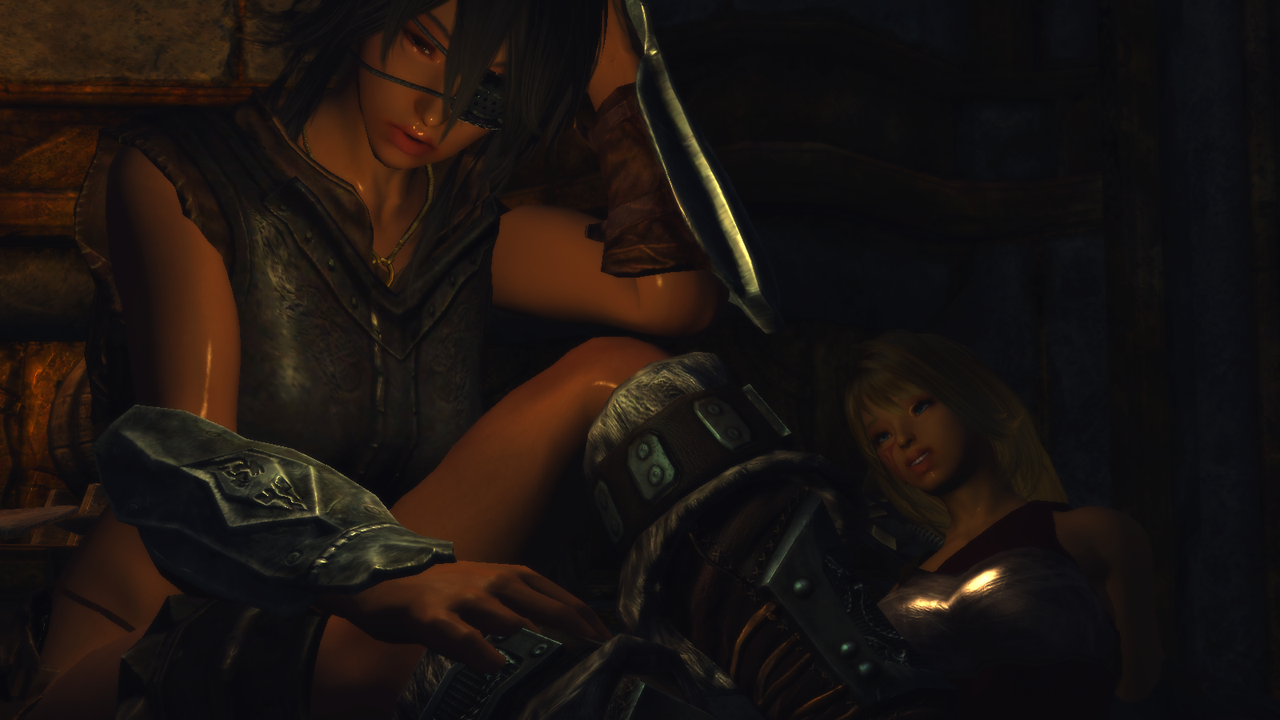 “So what happened to you?” Lucari prodded. “You kept saying it was nothing, but then you passed out back there.”

“It was—” She looked over toward Lucari and saw the very serious look in her eyes, and gave in. “It has to deal with the story I was telling you.”

“Yeah. You see, I may have been a bandit for quite a while, but before I was just a brat with daddy issues that didn’t want to face them. My time with the Forsworn changed me and made me into who I am today.” Niyleen sighed. “Anyway, it’s a long story and I doubt you’d want to hear it.”

“After I told you my life story, you think I wouldn’t want to hear yours?” Lucari giggled. “Besides we’ve got all night. And if push comes to serve, we can always get room service.”

Niyleen sighed and sat back on the cold hard bed. “Okay, well then. After Eolri had defeated me and made me her slave…” 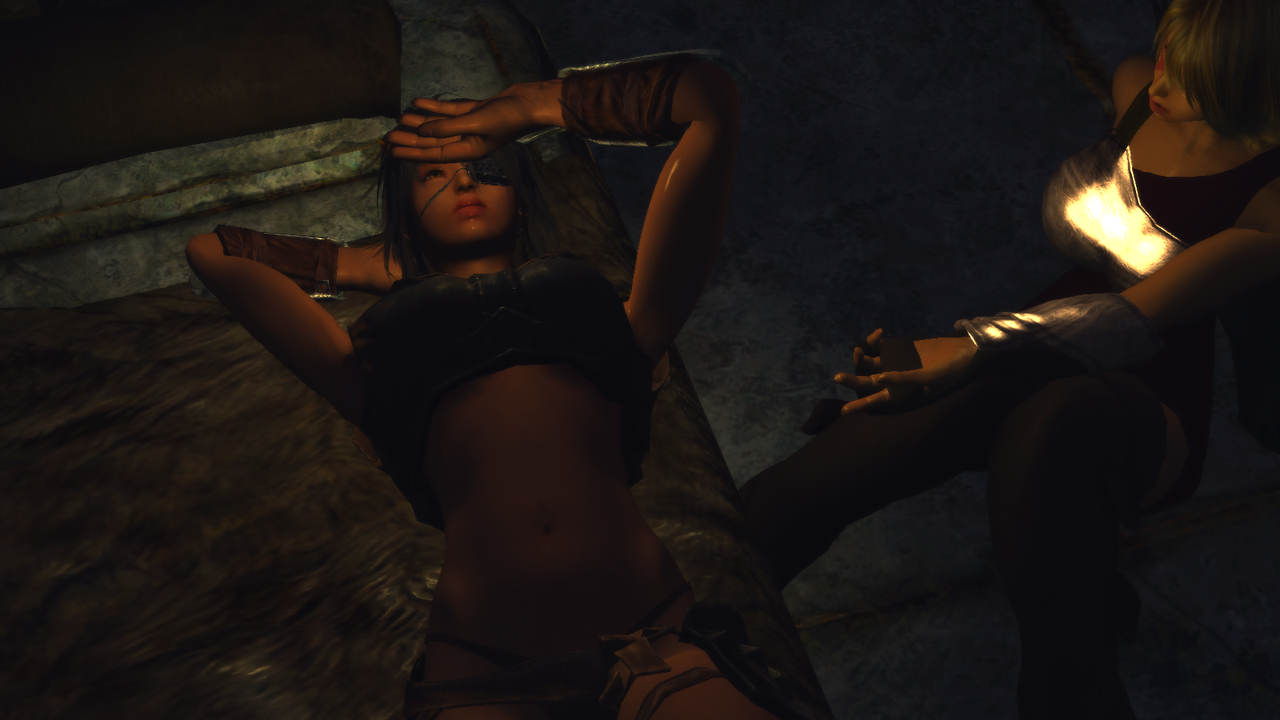