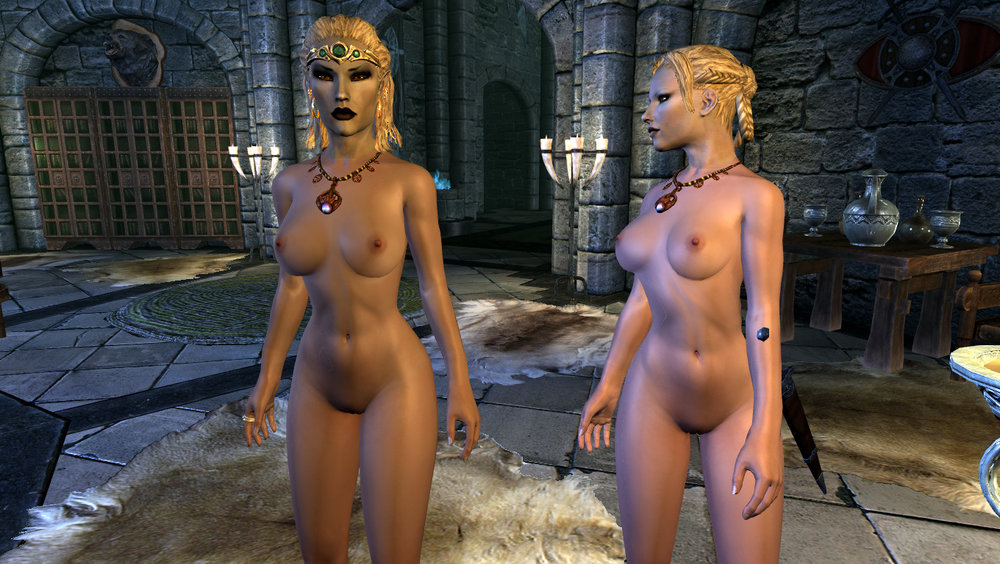 It only took a little over two months...65 days to be precise. That is how long it took Langwen, the beautiful, immortal and eternally young Wood Elf to go from an 18 year old in a cold cell in the Imperial Prison to being famous all across Tamriel as the Heroine of Kvatch and Bruma, Champion of Cyrodiil and Savior of Tamriel.

All of which were impressive titles to be sure but like all those of the Elven bloods and races, Langwen cherished above all the title of Arch-Mage of the Mages Guild at the Arcane University. This title had been won the hard way with tears, sweat and blood and Langwen still could not forgive herself for not arriving in time to save her colleagues at the Bruma hall of the Mages Guild who were slaughtered by Mannimarco, the evil and repulsive chief necromancer and leader of the Order of the Black Worm, a most horrible necromantic cult. Langwen had gone into Mannimarco's lair at a cave high in the Jerall Mountains...may its name be accursed and forgotten forever. She killed all of Mannimarco's followers and final the foul King of Worms himself fell by Langwen's keen magic.

She returned victorious to the Arcane University wearing the embellished hooded Robes of the King of Worms himself whereas she left to battle him completely naked. This was a contest of magic skills not one of blades. All this is known to the people of Tamriel, however what is less known is the story of Langwen's Nord lover, a beautiful blonde-haired and brown eyed beauty named Darena, which means gift and present in the Old Nord Tongue and is most likely a derivative of Darina, which means to give a gift or to bestow a present.

It is unknown to this writer how this Nordling girl managed to be inducted into the military arm of the Mages Guild called the Knights of the Order of the Lamp, but she rose swiftly through the ranks and like Langwen came to attention of the...LATE, and much LAMENTED...Archmage Hannibal Traven, of beloved memory, who ordered an in-depth investigation into the girl's background...perhaps wondering if her skills with magic...which came as easy as breathing...were due to some Breton, Imperial or Elven blood in her veins...Nords not being known for their tolerance towards those magically inclined.

The investigation showed that when Darena was 12-13 years old, she was sent by her parents to gather firewood and was ambushed by a necromancer whom she swiftly killed with both fire magic and repeated blows with a firewood axe. Darena didn't even noticed what had happened it was all a blur and she acted on instinct. Only when she saw the blood and hacked body parts did she finally start crying and shaking uncontrollably, rubbing her hands frantically as she panted and gasped to try and get the blood off. All it did was smear the blood all over and make it worse. The horrid stench associated with necromantic practice didn't help either, but Darena tapped into the depths of her being as a Nord woman and manage to calm herself down. She waited for the tears to dry off and then returned to her village, Dragonbridge, carrying both the thick stack of wood and the corpse of the necromancer as proof. Nords always require proof, especially of valorous deeds.

His death was seen as a welcome by the local Nords, however the young girl was mistrusted by her neighbours for her magical abilities and as she grew into a young woman, her attraction towards the other maidens of her...and surrounding...villages and settlements.

Her parents managed to get Darena sent way to live with her aunts in Bruma...in reality the two aunts and their female lovers...and from there she was recruited into the local branch of the Order of the Knights of the Lamp...as a bodyguard to the court wizard of the Countess of Bruma. Cynical Nords of Bruma saw this as a simple sop to their pride however Darena proved herself with both magic and the traditional Nord way of the warrior and won grudging respect. She was just barely entering into womanhood.

Darena and Langwen first met in the Council Chambers of the Archmage's Tower of the Arcane University and from what this author was told, they had become instantly smitten with one another in an instant, even holding hands together openly while Archmage Traven instructed them on their mission: To obtain a powerful book, books or set of books from the Count of Skingrad...books powerful enough which MUST NOT be allowed to fall into the hands of Mannimarco or any other hidden necromancers in the West Weald area of Cyrodiil. As they gazed upon each other, it was as if two blooming orchids had opened at the same time, flooding the senses with their scent. Both their nipples hardened, their pussies grew moist and their lips and mouths started drying, causing them to lick their lips on instinct. Their hearts also started racing although Langwen, being imbued with the iron discipline of the Blades, immediately got her body under control. Darena took just a little longer before she stood at attention as the Arch-Mage spoke.

It is well known that Arch-Mage Traven's hatred for necromancy earned him powerful enemies, some of whom posed as respectable wizards, which is why Langwen and Darena were sent to Skingrad in absolute secrecy...dressed as a simple Wood Elf/Bosmer court wizard and her Nord bodyguard. The successful mission to get the books and other secret information from Count Janus Hassildor and the rooting out and killing of all necromancers within the city, earned both Langwen and Darena promotions and well deserved praises and brought the two lovers closer together. Nothing like shared danger and abstinence to make two hearts grow fonder.

After defeating Mannimarco, Langwen returned in the early hours of the 30th of Frost Fall (October) to the Arcane University wearing the Robes of the King of Worms and carrying in a sack his severed head as evidence that he was killed. Her first act as Archmage was to promote to the Council of the Mages Guild...which had been decimated by Mannimarco himself and by defections to the necromancer's cult...men and elves who hared and/or exceed her own hatred for the foul and vile art of necromancy and secondly to order all chapters of the Knights of the Lamp to intensify their hunts to eradicate necromancers, their severed heads placed upon spikes along the rods and atop the gates of all major cities and all villages and settlements as a warning. Their corpses were to be burned and all ashes thrown into the rivers. Langwen then went to bed and after a quick nap decided to bathe and cleanse herself...after her Goddess Dibella had come to her in a dream.

She heard the sound of leather/hide boots on the stone floor as she lay in the octagonal stone bathtub, the steam and scents of perfume permeating the Archmage's Quarters. She knew who it was without having to turn her head, it was her Nord lover Darena. Darena stopped and stuttered, her beautiful voice filled with uncertainty:

"-Good morning, Arch-Mage Langwen...my love." Darena said before some confidence was regained "It is is almost sunrise." she said as Langwen simply nodded her head and then motioned her lover into the bathtub with her:

"-Darena are you all right, you seem a little scared. Tell me what is troubling your heart and mind." Langwen said as Darena entered carefully into the hot steaming water and she and Langwen kissed passionately, their amulets of Dibella intertwining.

"-I had a dream about the two us...seemingly from the Divine of Lover herself, Dibella. And then I woke up with this around my neck..." Darena said before Langwen cut her off.

"-You mean this Amulet of Dibella that I also have around my neck, Darena...and let me guess, the dream was about a wedding...OURS...to be precise? Am I getting close?" Langwen asked smiling mischievously as Darens's brown eyes grew big and mouth fell open, Langwen closing it with a kiss. Darena simply nodded her head which told Langwen everything she needed to know. Langwen smiled outwardly and inwardly as she realized how spot-on she was.

Darena gasped and her heart raced before regaining her momentum, using this small time interval to quickly search for the proper words. Words meant to convey both love and chastisement, since Darena was upset Langwen didn't take her with her to kill Mannimarco, however someone had to lock down and secure the Arcane University in case Mannimarco made a surprise attack. This time Langwen allowed her brain to overrule her heart.

"-Before you went to Echo Cave...during and...right now...you never took me with you. I prayed for your safe return but I feel that I did not get the chance to speak my mind, lover. I would like to make this dream a reality so...Langwen...will you marry me?" Darena asked as she strained with every fiber of her being to keep from stuttering and stammering.

Langwen suspected something like this might be coming but she never expected it right now. Still this saved her the trouble of proposing and it's not like she was going to say no. Her heart was beating like a blacksmith's hammer as she felt ecstasy and happiness suffusing every inch of her mind, body and soul.

"-Darena, the answer is yes. Yes, I will marry you. Today, in fact. If our dreams are an omen of good fortune from the Goddess Dibella herself, we would be stupid to dismiss them. Dibella will provide, blessed be Her holy name." Langwen said as she and Darena embraced and kissed passionately, their bodies being warmed not just by the fire of their passion, but by the rays of the sun as it rose over the Imperial City. Langwen remembered now that Darena was about 2 and half months younger than her and she was born at sunrise...or just after it, on this day 18 years go, the 30th of Frost Fall 3E415.