We arrived at Bruca's Leap without any trouble which was a nice surprise given that there are a couple of bandit camps in the vicinity plus some other things.

Bruca's has more forsworn outside than I recall plus there was a minor problem with Inte's cages. 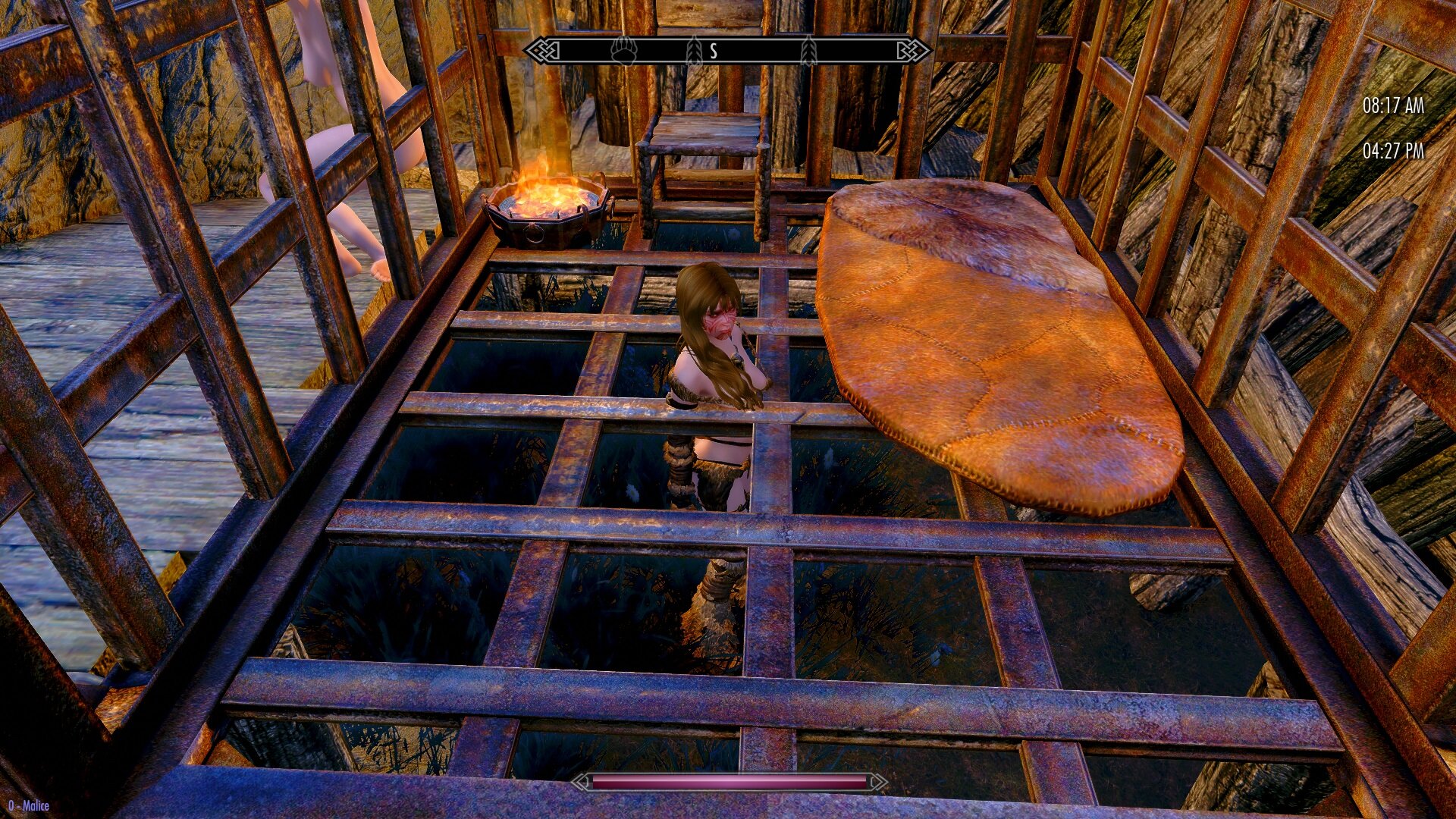 This guy must have ruffled some feathers. 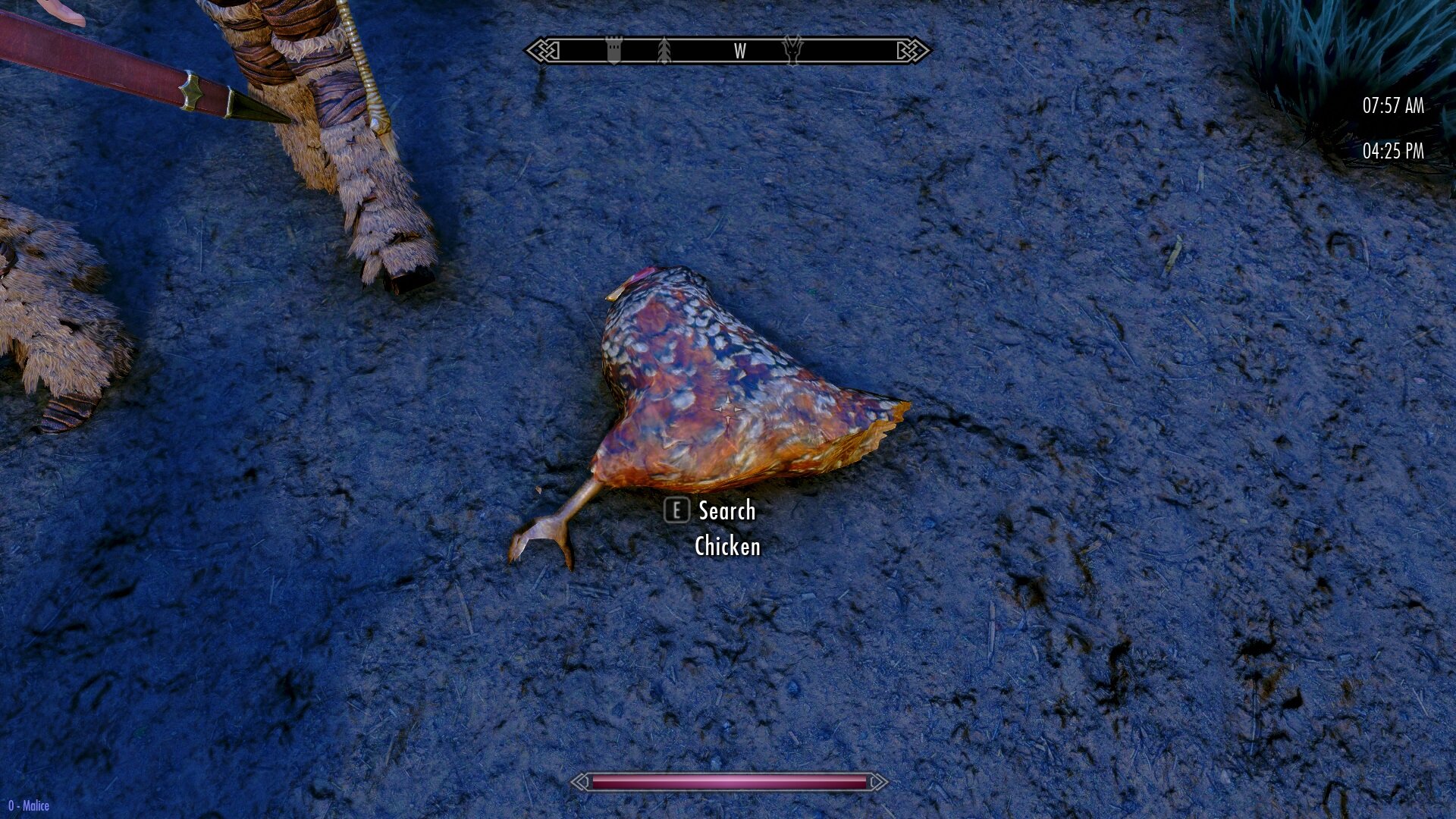 No sooner had we left Bruca's when I spot this. 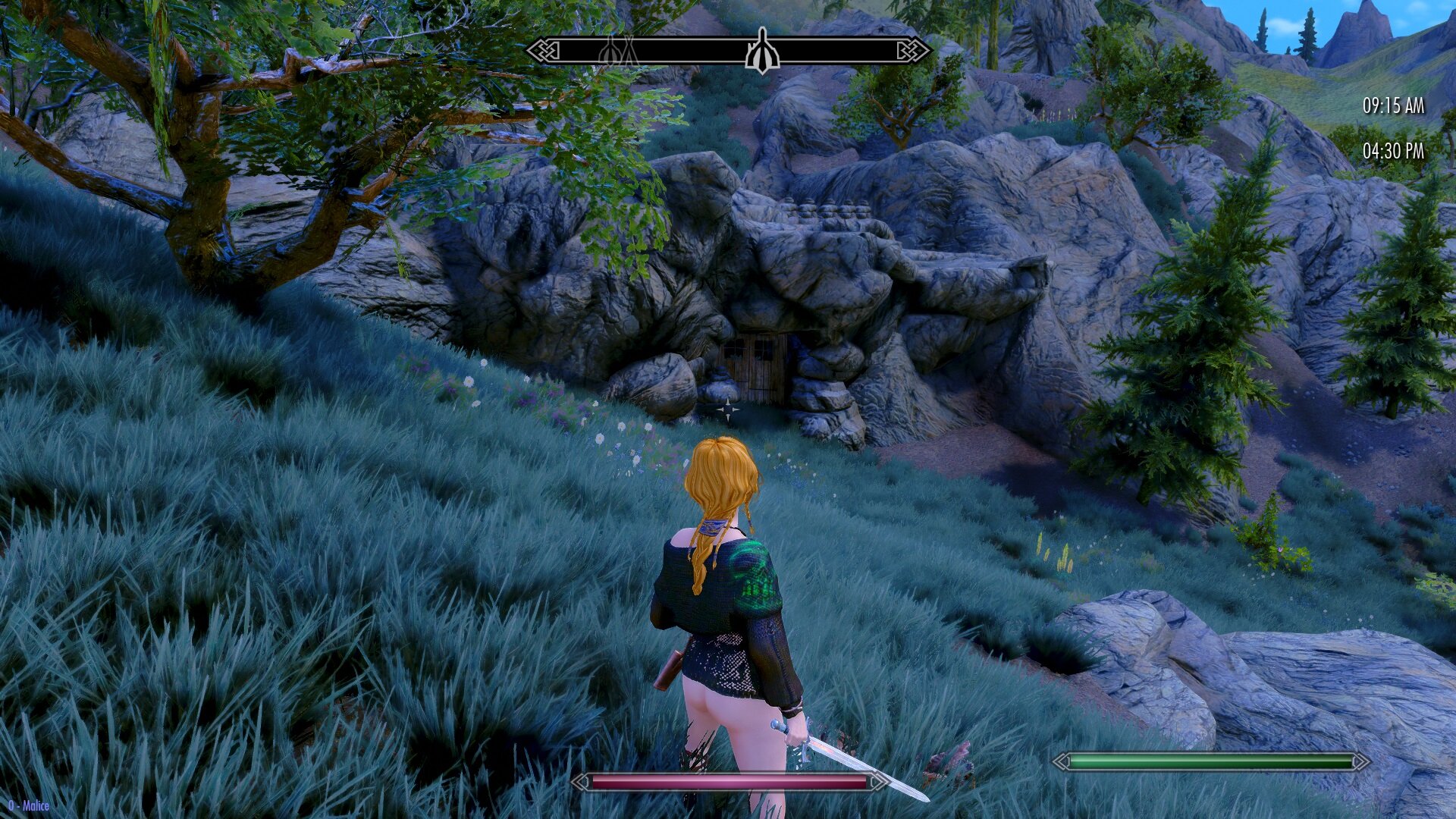 On closer inspection it turns out to be another Forgotten Skyrim location. 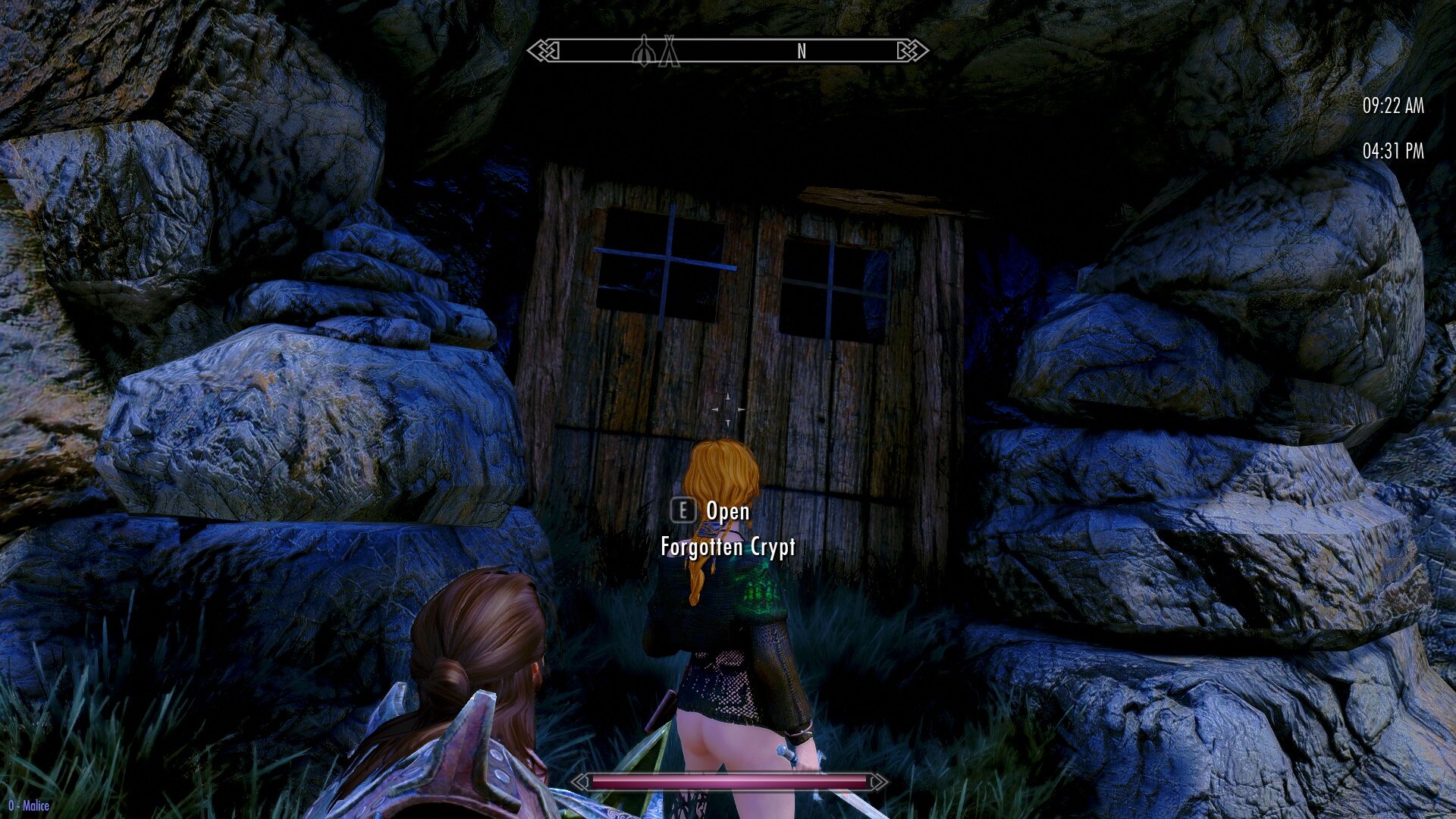 It's a huge place but not much of interest in there apart from this little fellow. 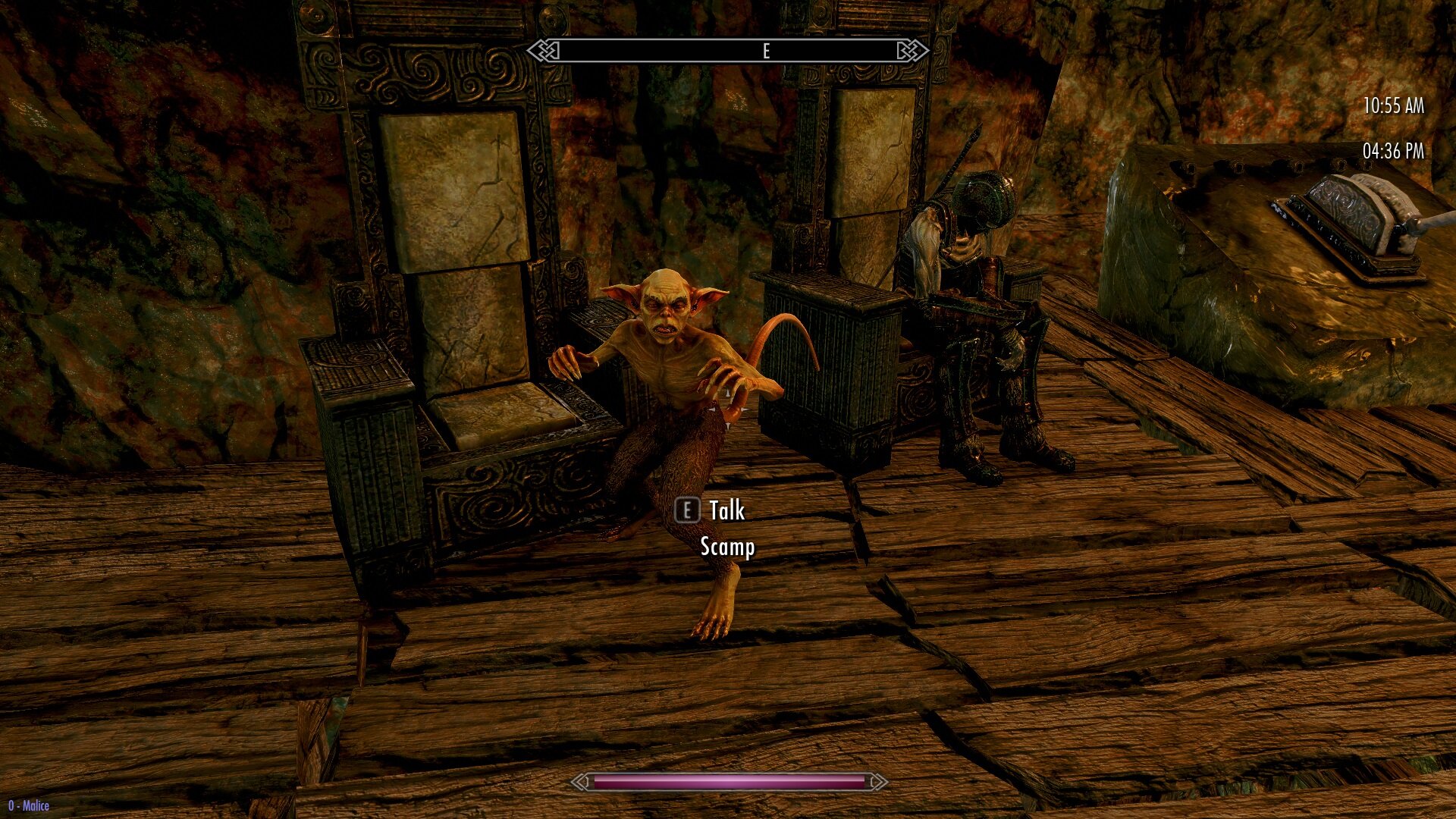 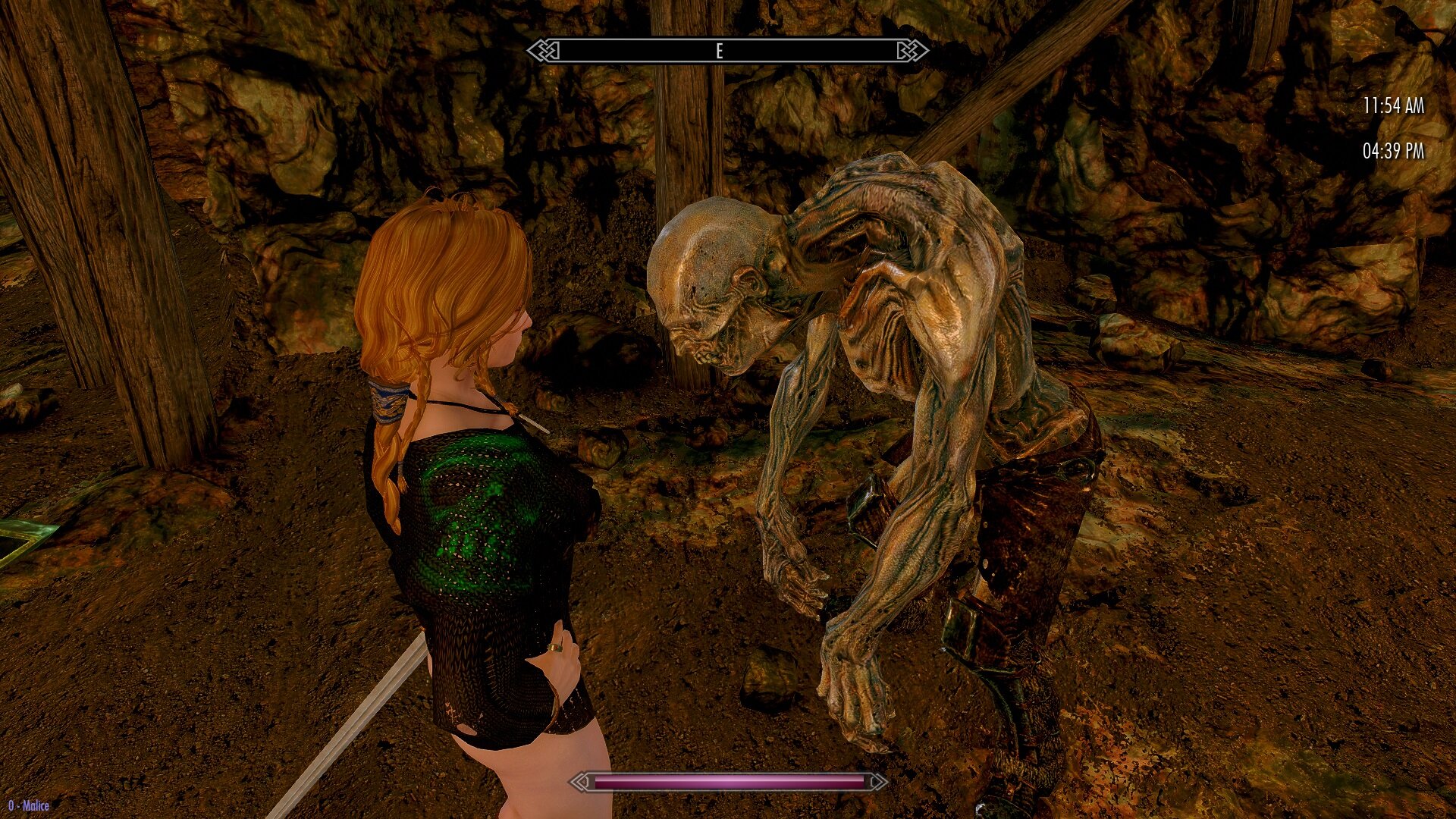 "Put some clothes on. You'll catch your death" 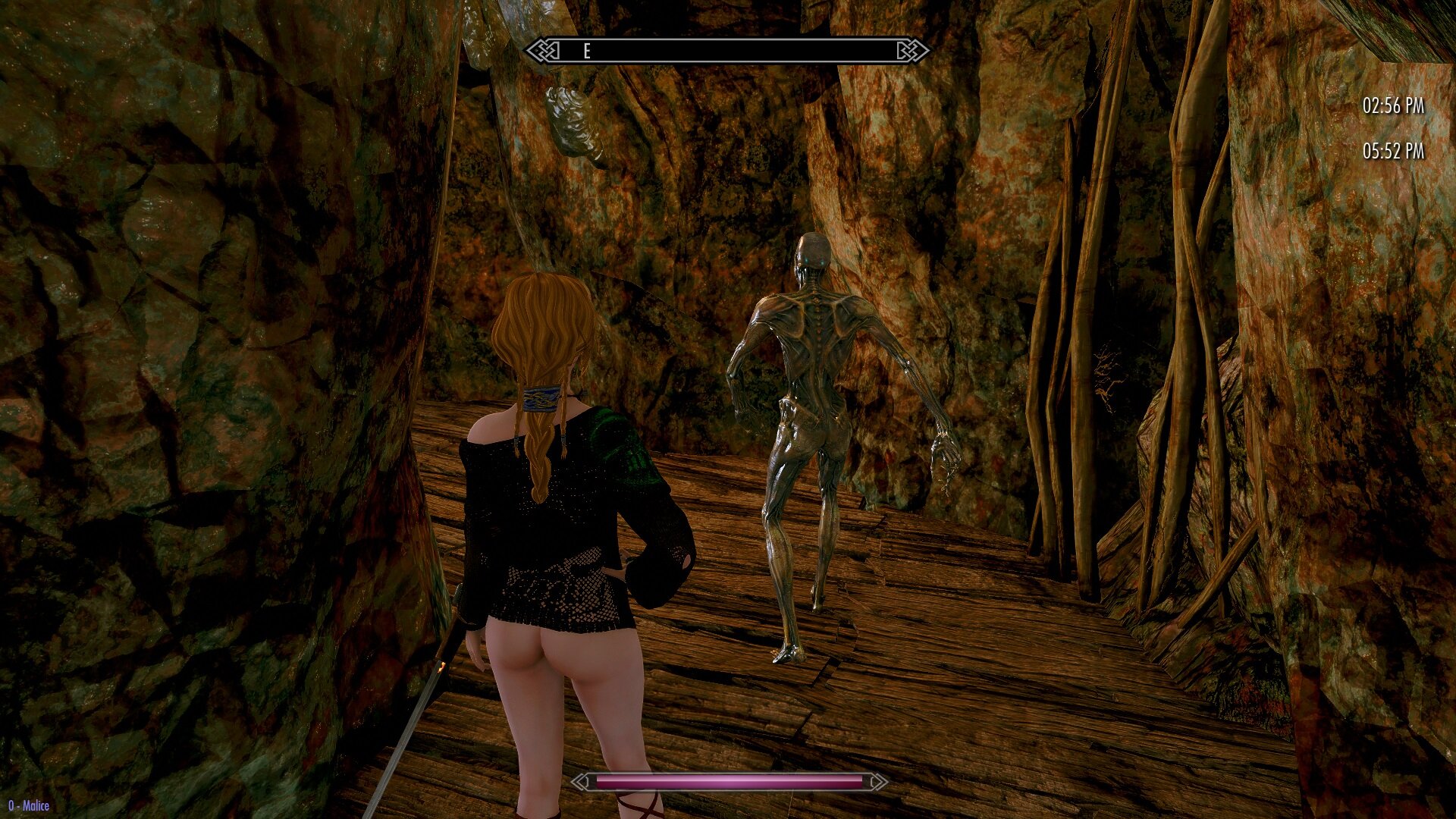 And of course we couldn't get through without an HSO villain. 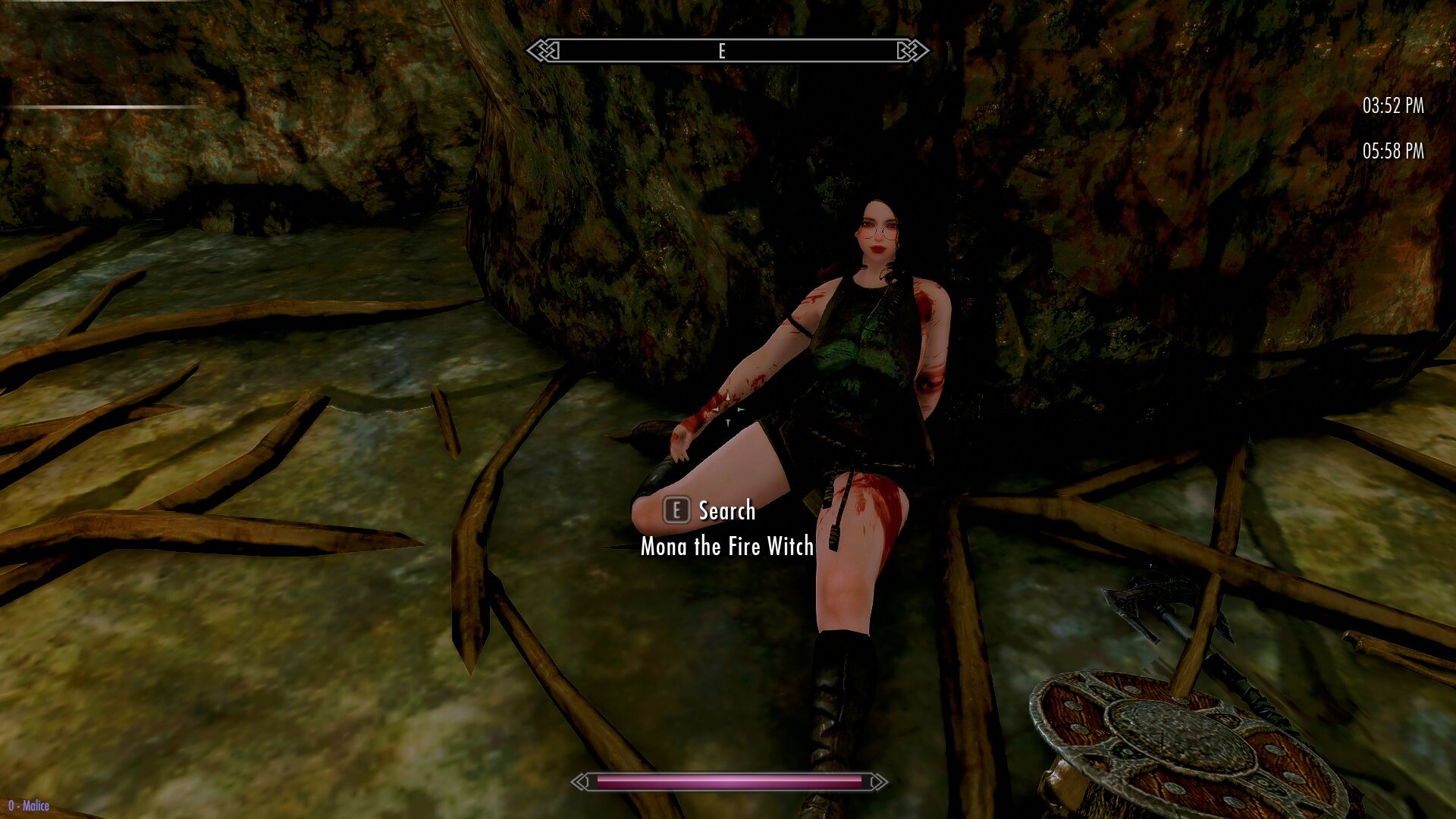 Taken after the by now mandatory second attempt backed up by several draugr. ☹️

Dragon Bridge by moonlight. We managed to get here with only a single bandit and a werewolf and wolves to fight. 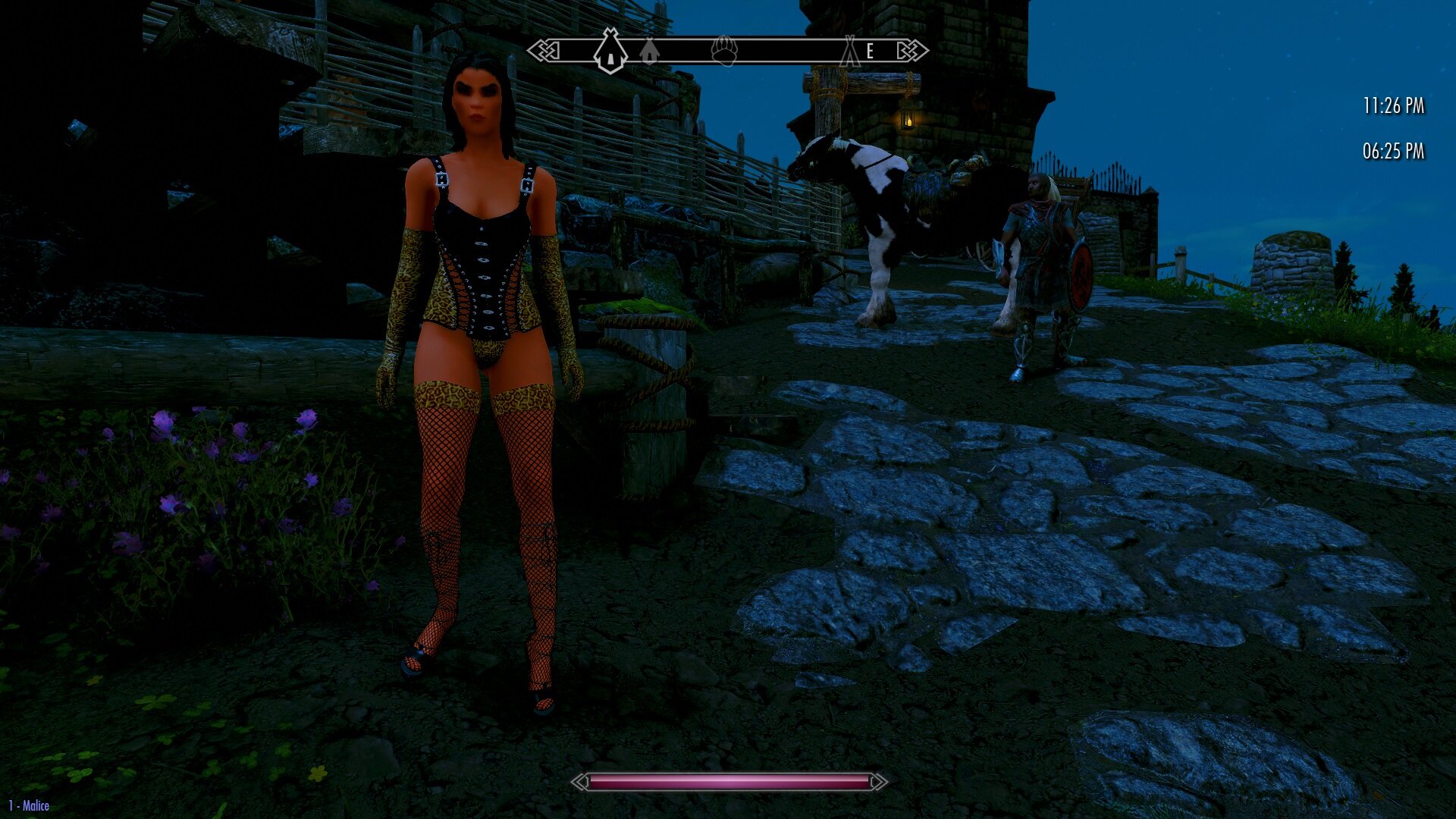 Apparently the jarl has ordered the guard in Dragon Bridge to keep a low profile. 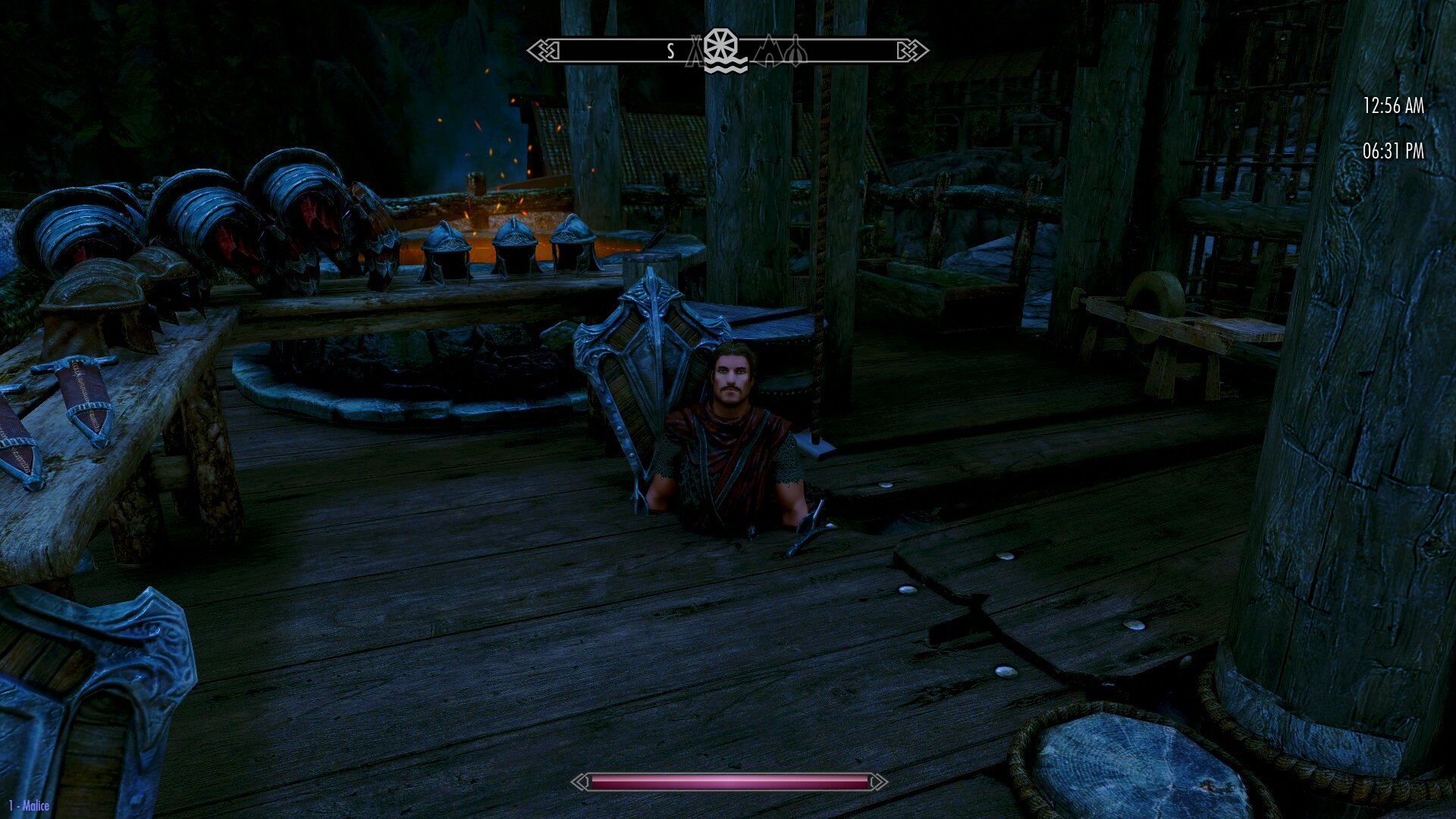 Time to enter the inn to wait for the shops opening and to check on the number of followers in there. Fingers crossed there are no surprises awaiting inside. 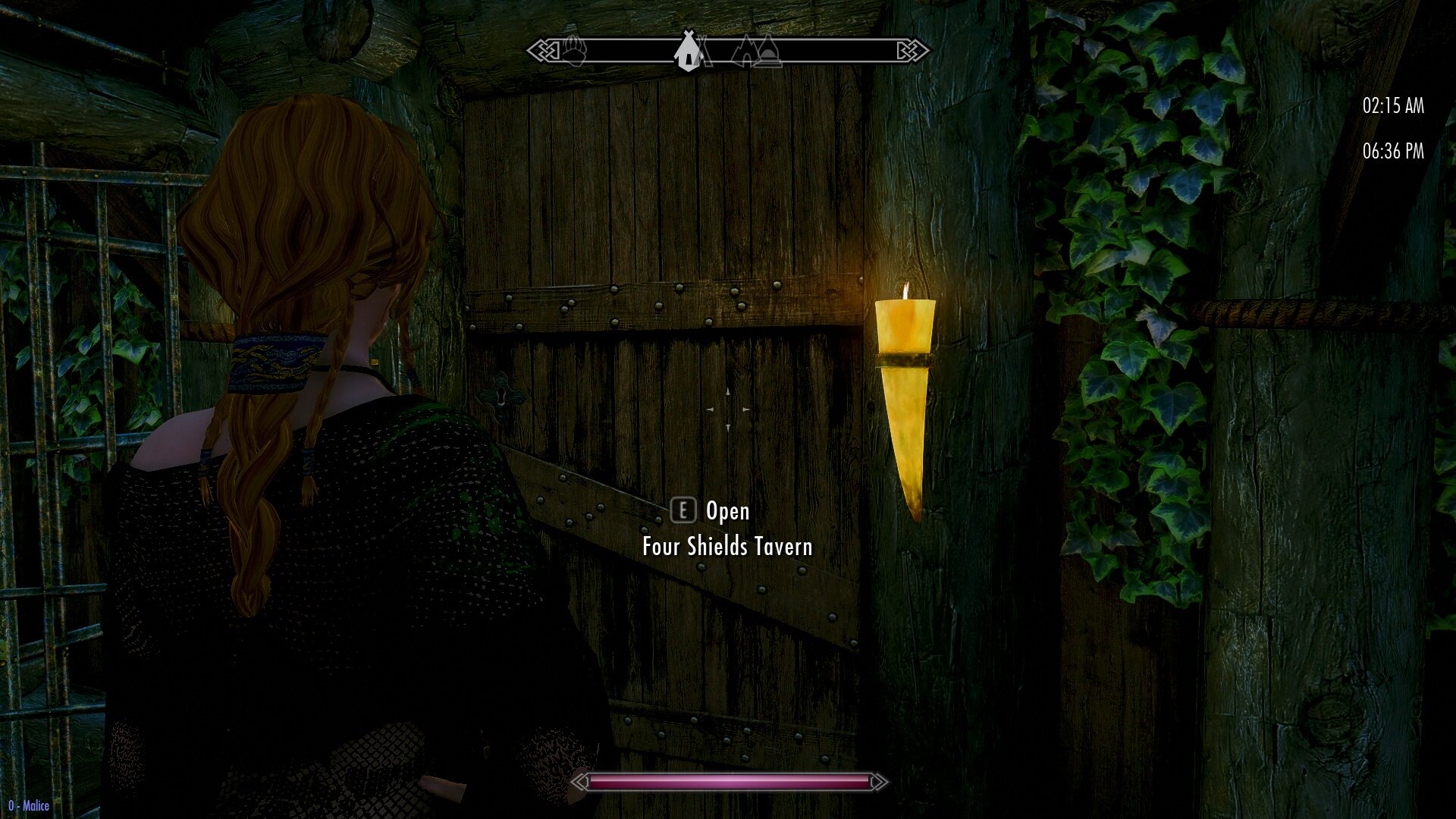 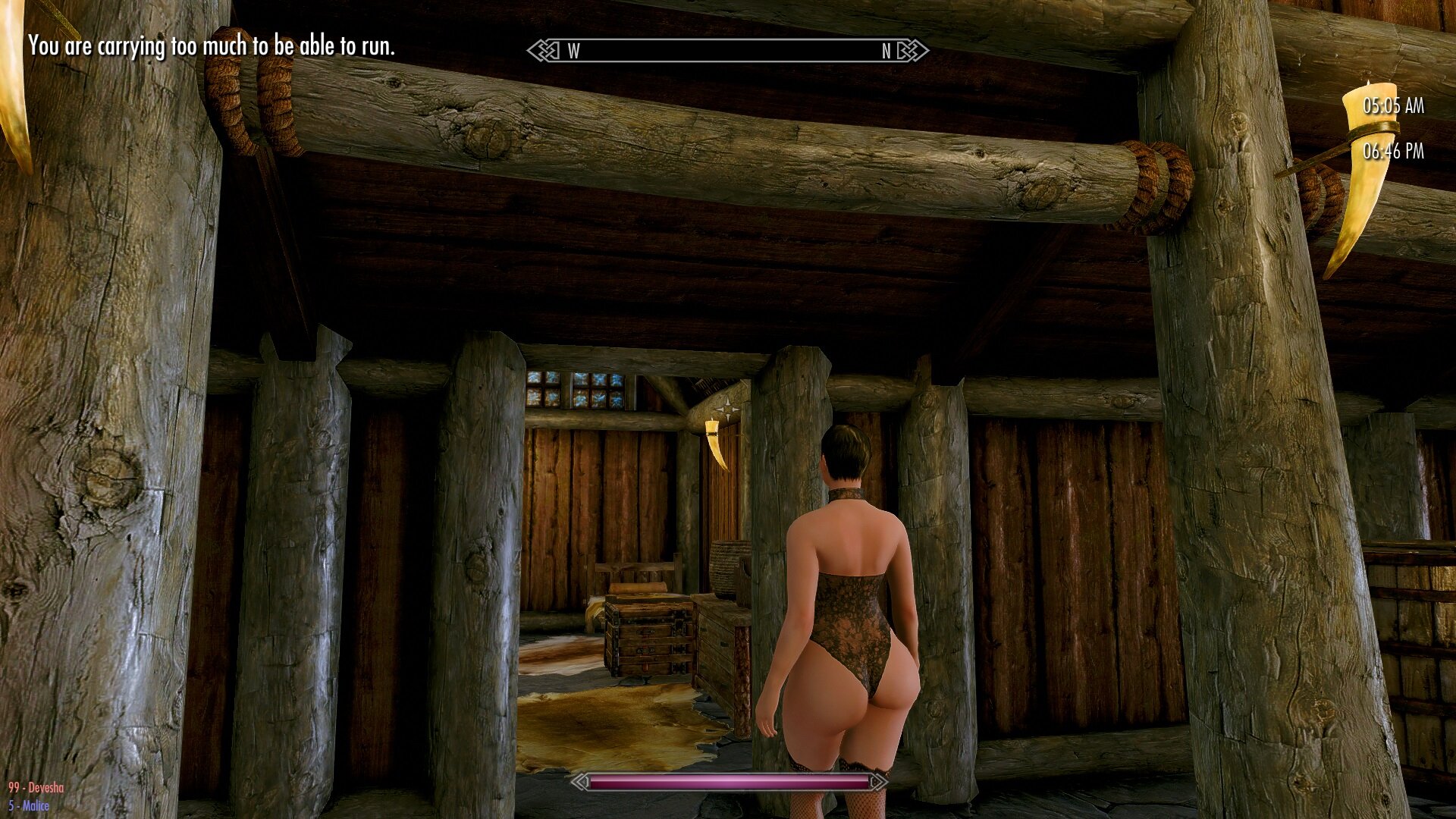 Coda's has now got an ebony axe we picked up along the way crafted and enchanted so if he ever gets stuck in a wet paper bag he can fight his way out. 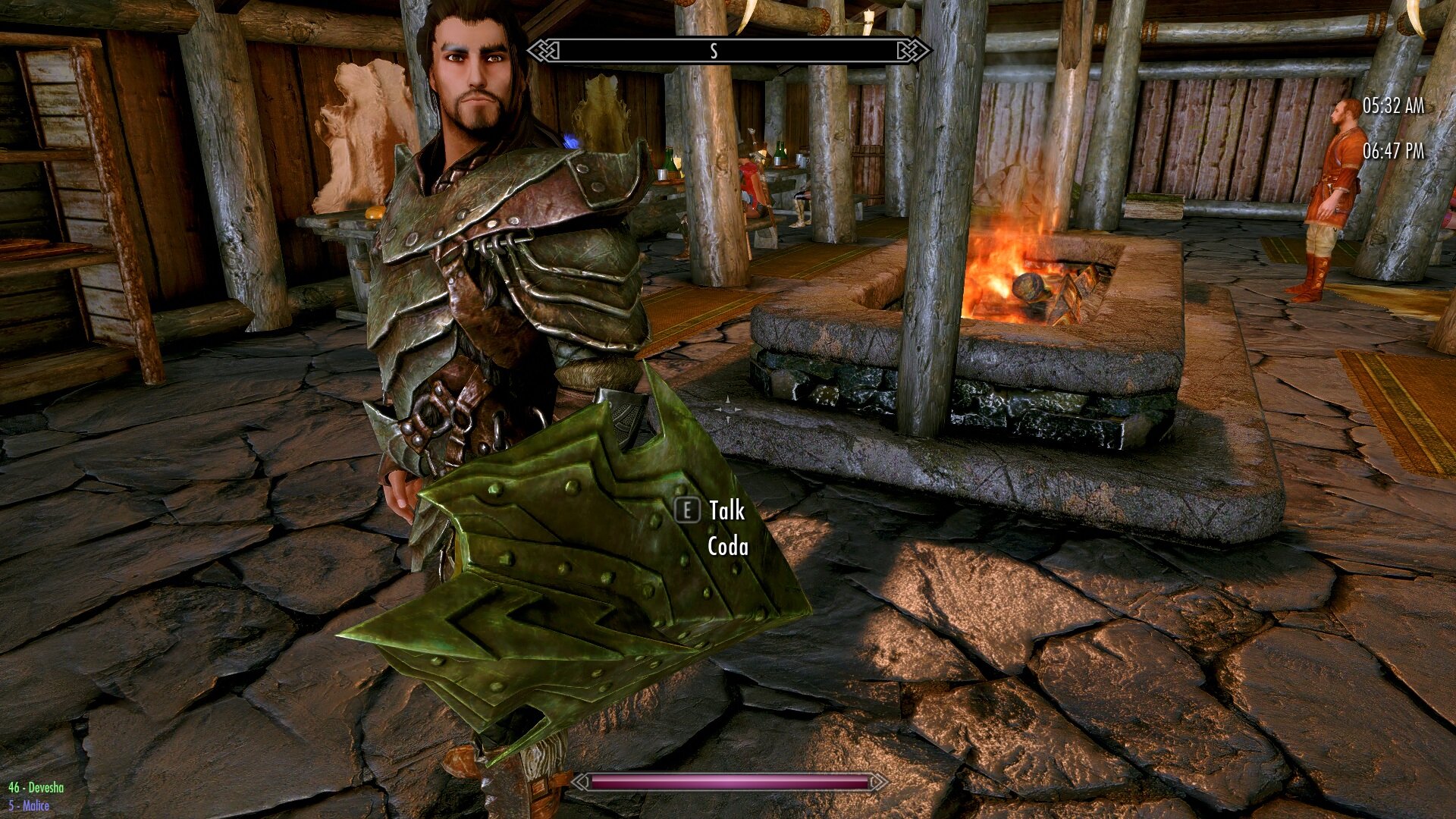 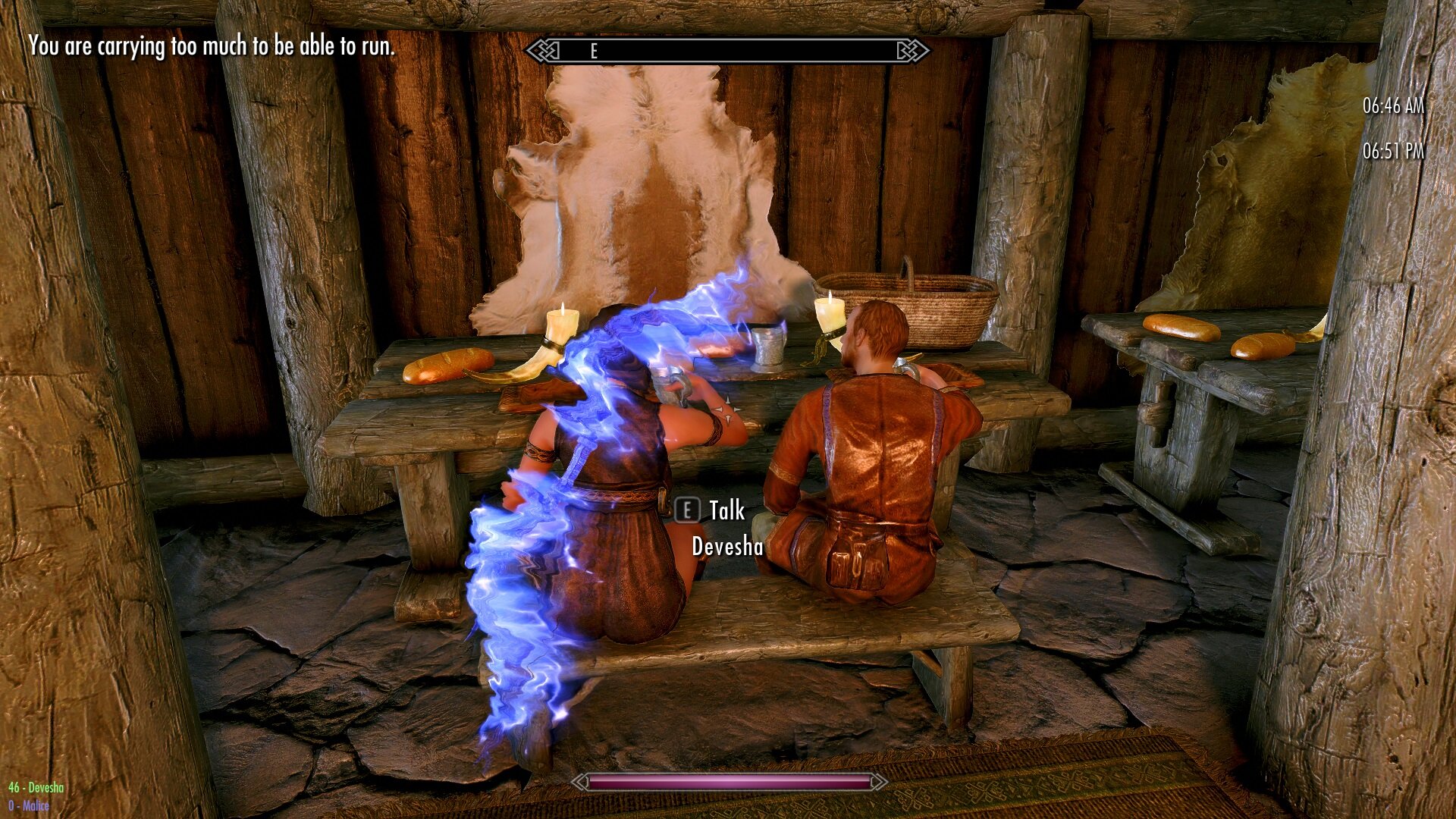 She's from the same mod as Coda.

Five followers in the inn but now the shops are open so first stop the blacksmith.

That Coda, What a guy. 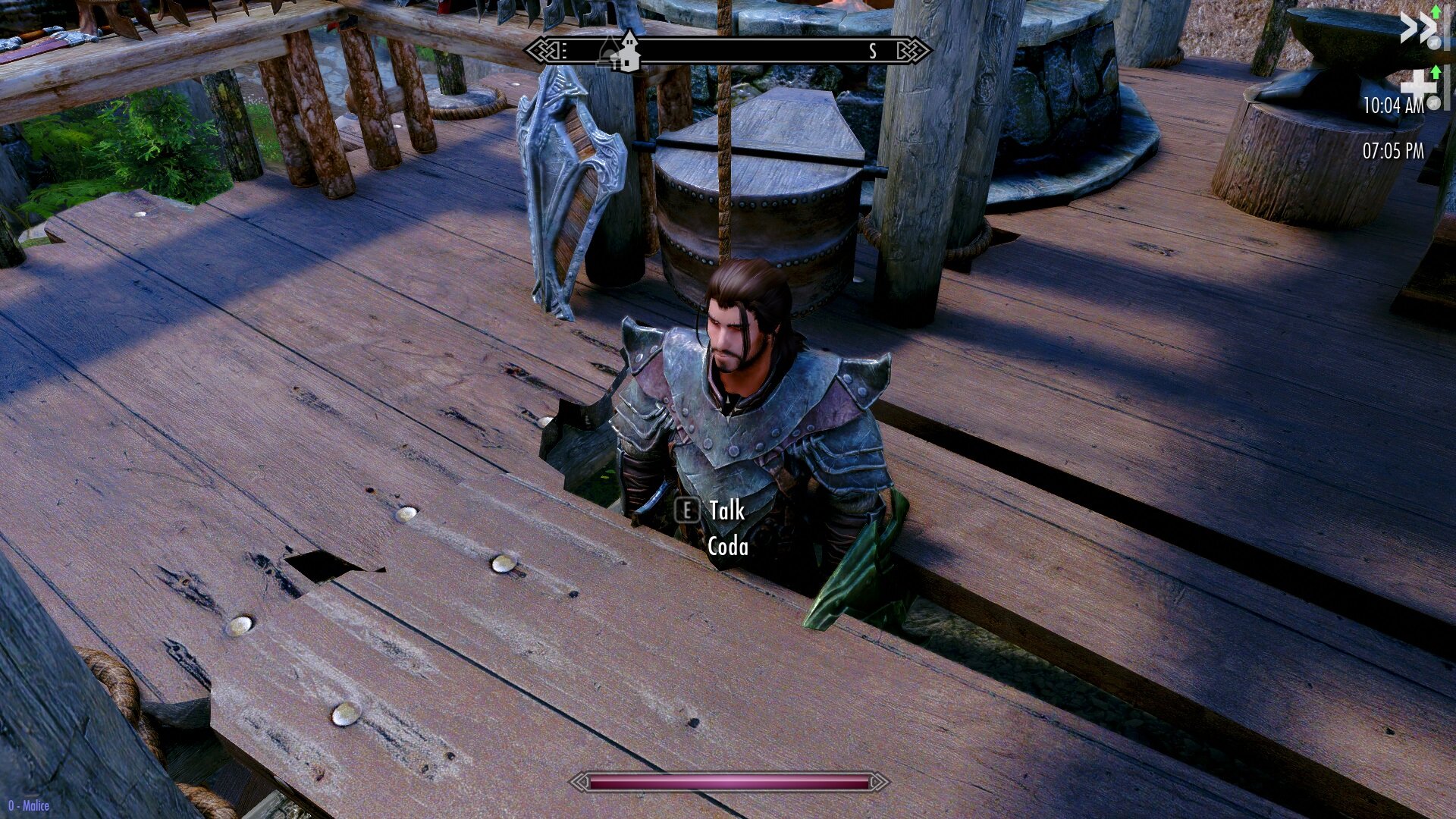 Either this has just had a fresh coat of paint or it's missing its texture. 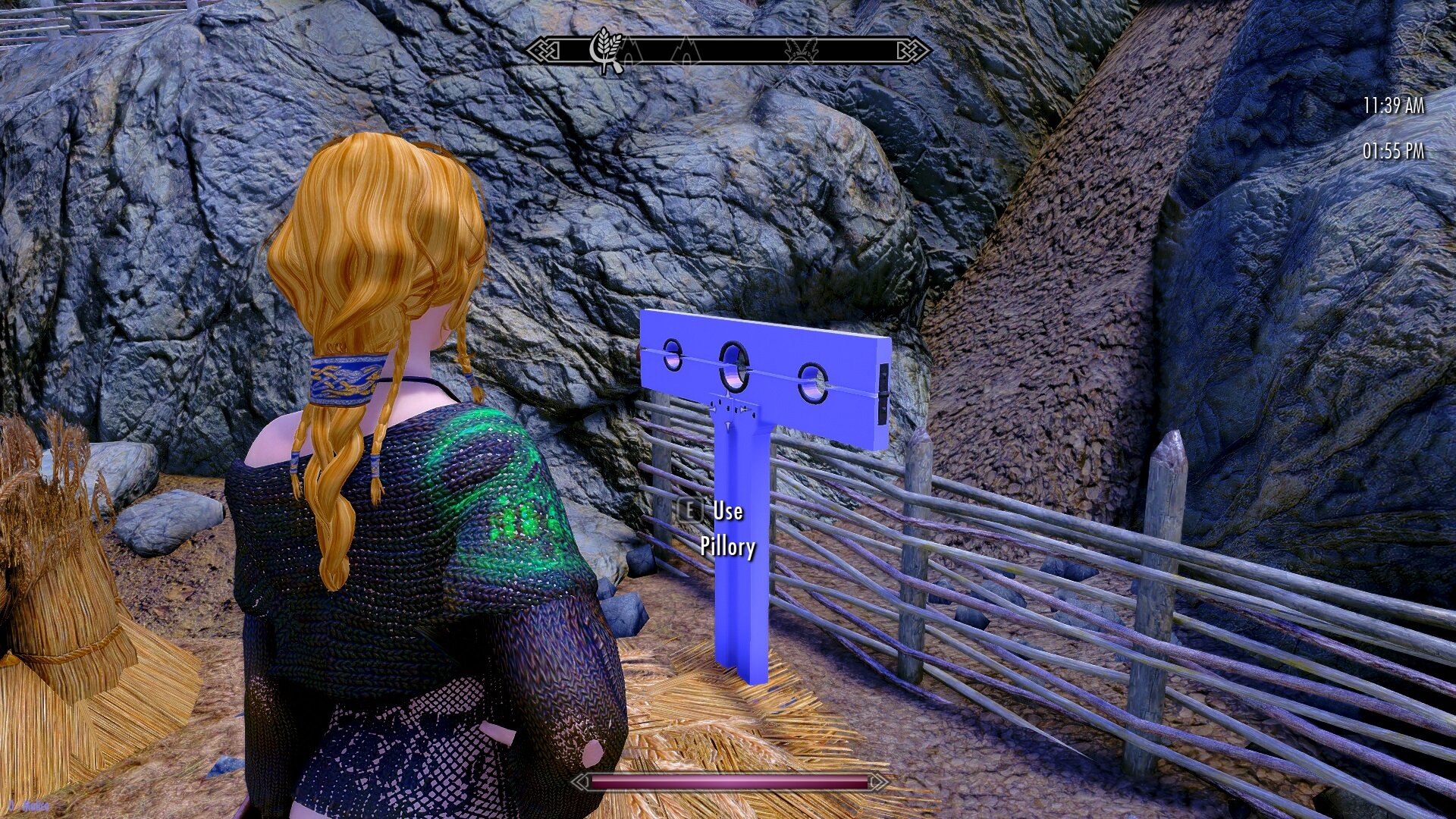 We step out of the trader's store and a head goes rolling down the street, and at a fair rate of knots I might add.

What's in a name? 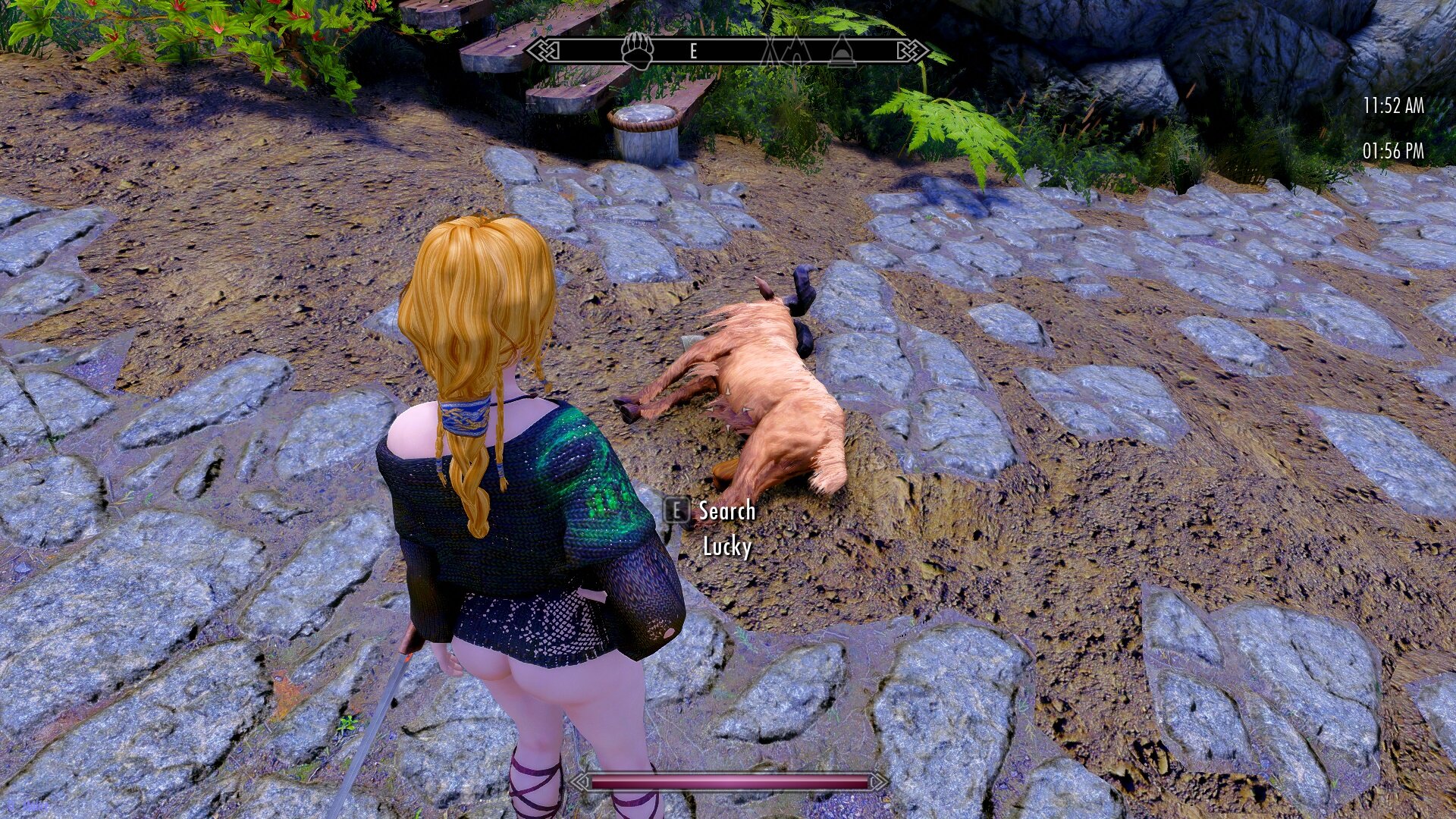 Through the gate and a few yards up the hill we discover the source of the head. 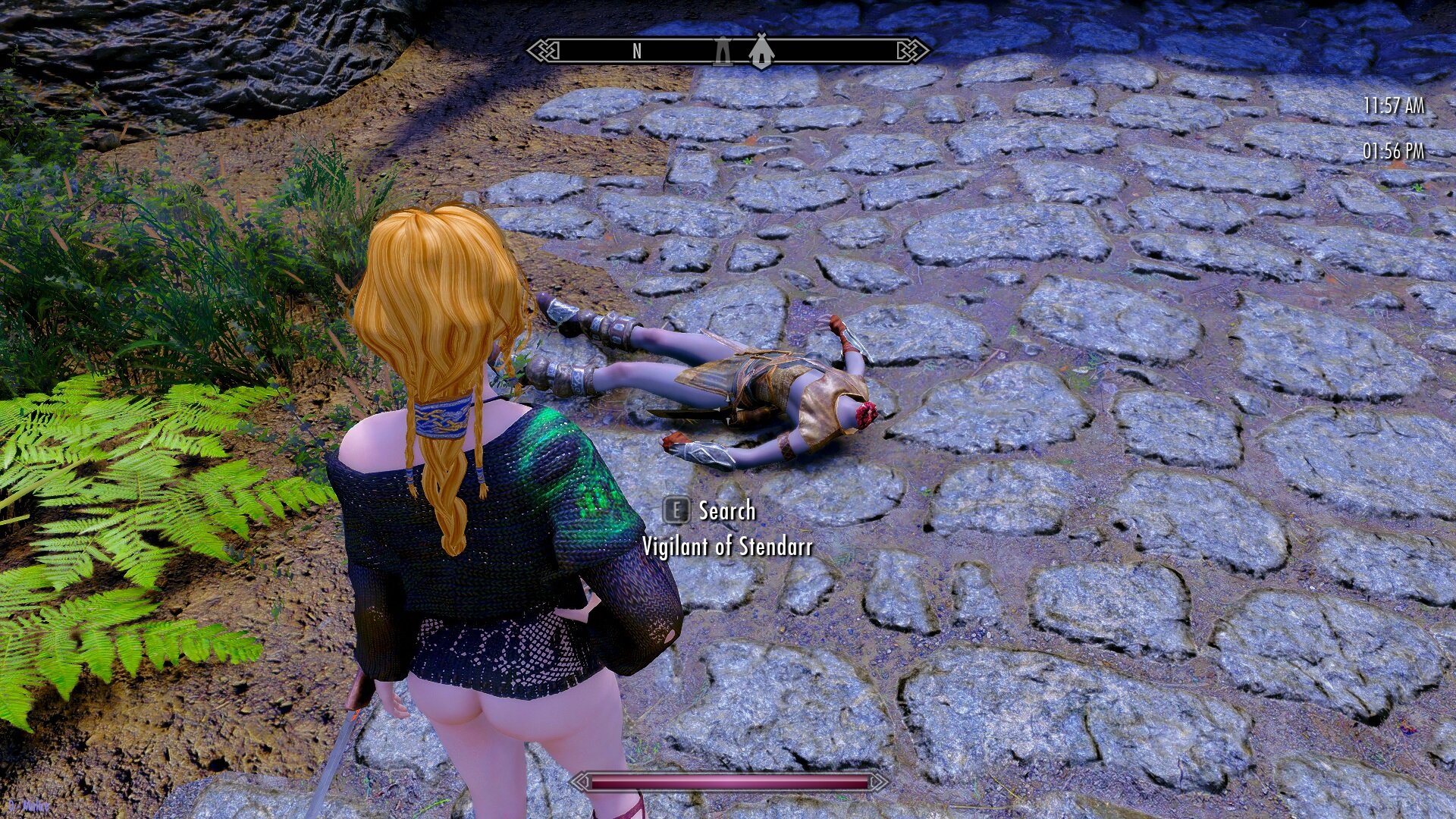 A few yards on and a dead poacher. 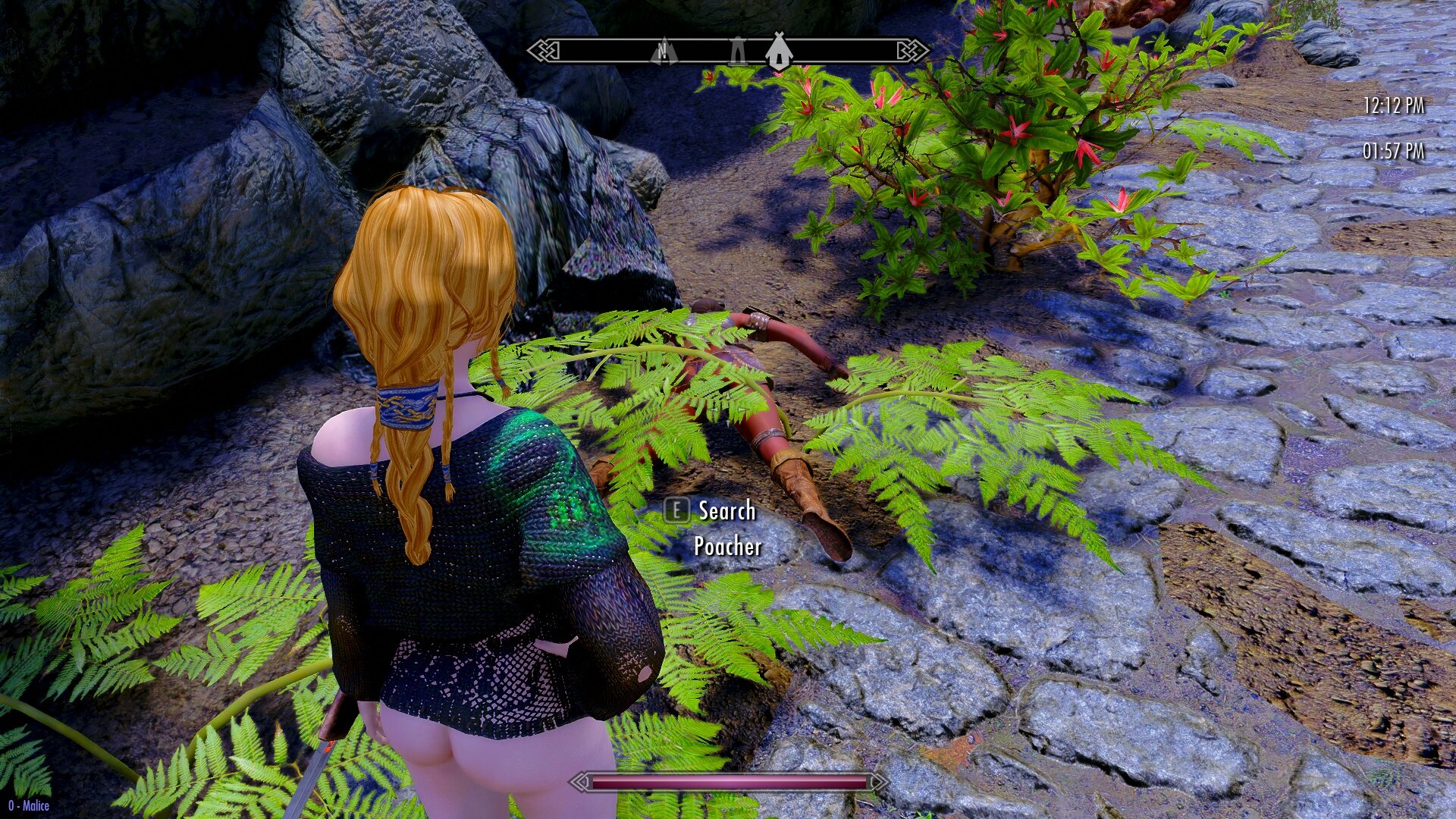 Followed a few yards on by a dead wolf. 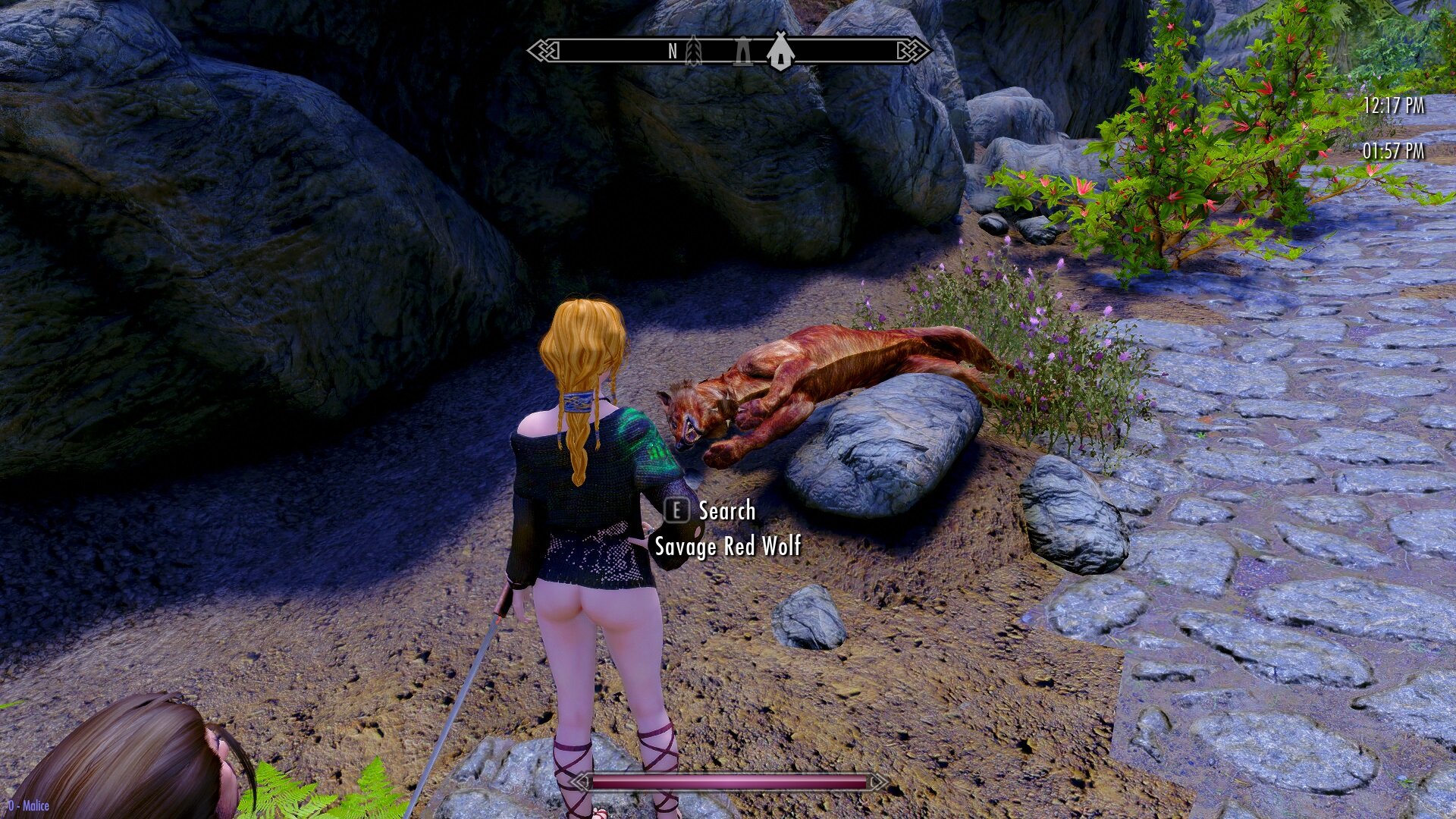 Solitude is starting to look a long way off. ?

We get to the junction and look up the road. Slavers so they aren't hostile.

There was one or more dead stormies around here as well. 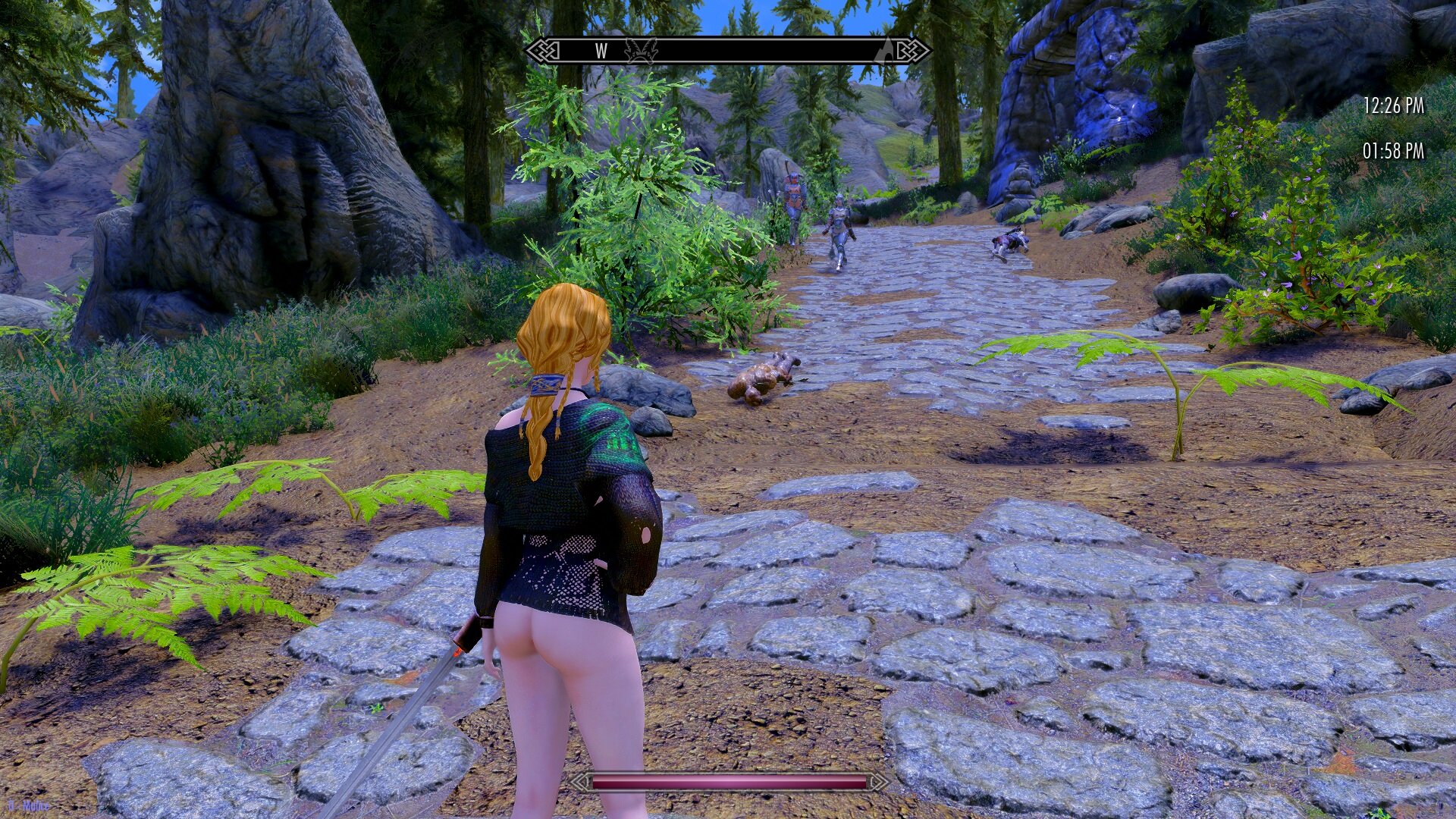 Waste not, want not. Time for a spot of looting. 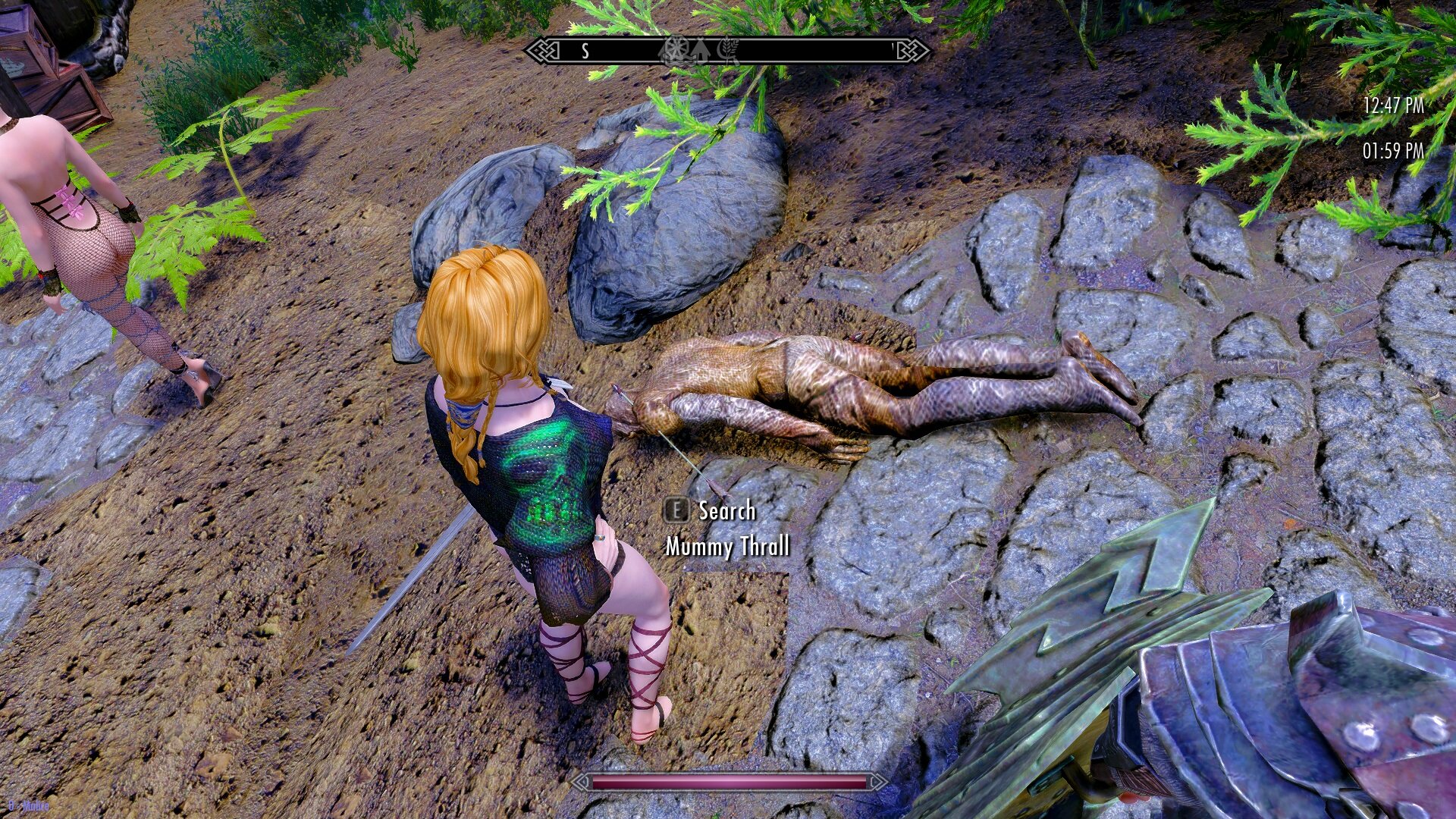 Back to the main road and we find an Imperial patrol who think staring at a rock face is a better option than risking the road. 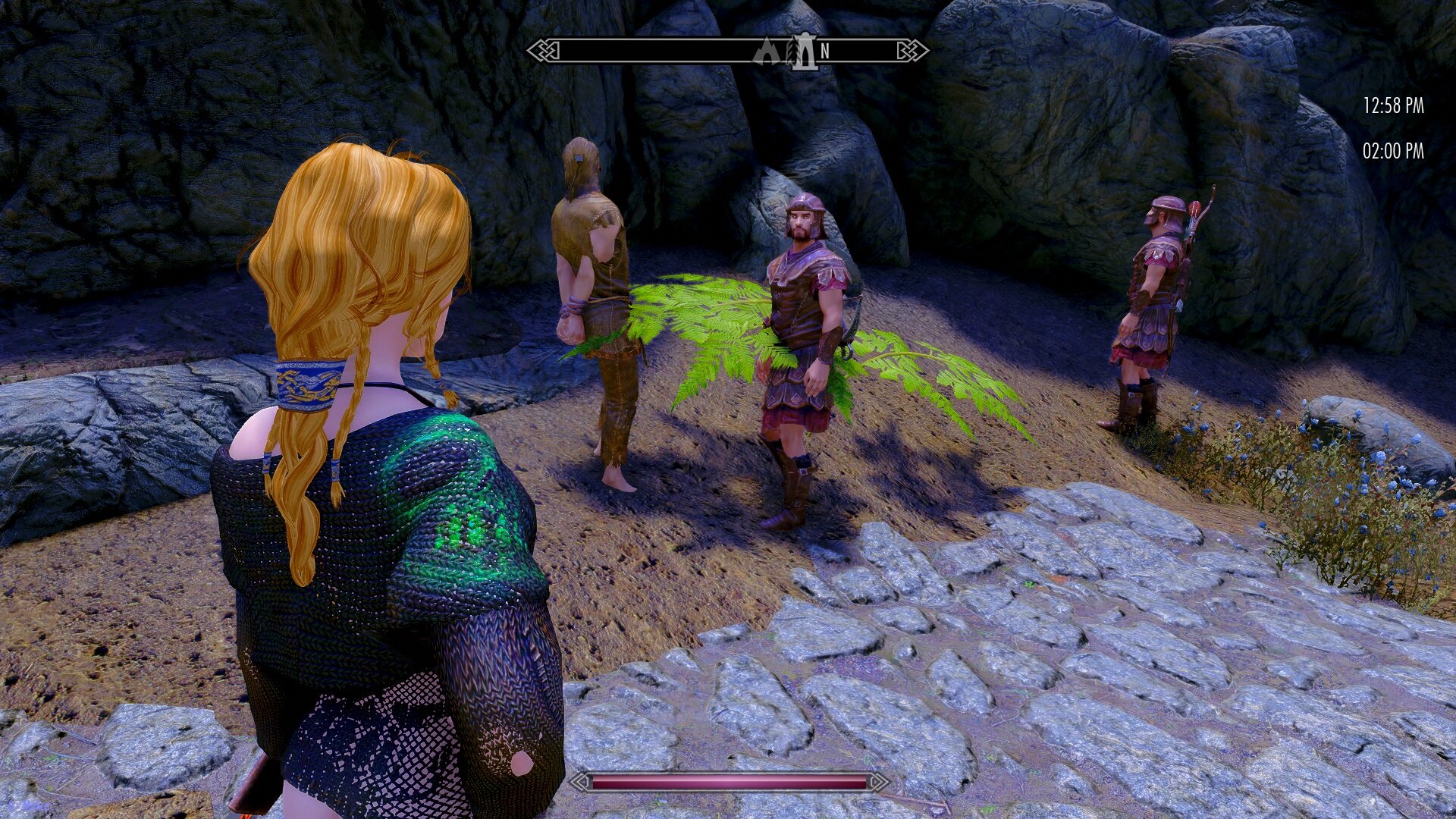 Finally we make it to Solitude.

"Hey Coda. I think you dropped your brain" 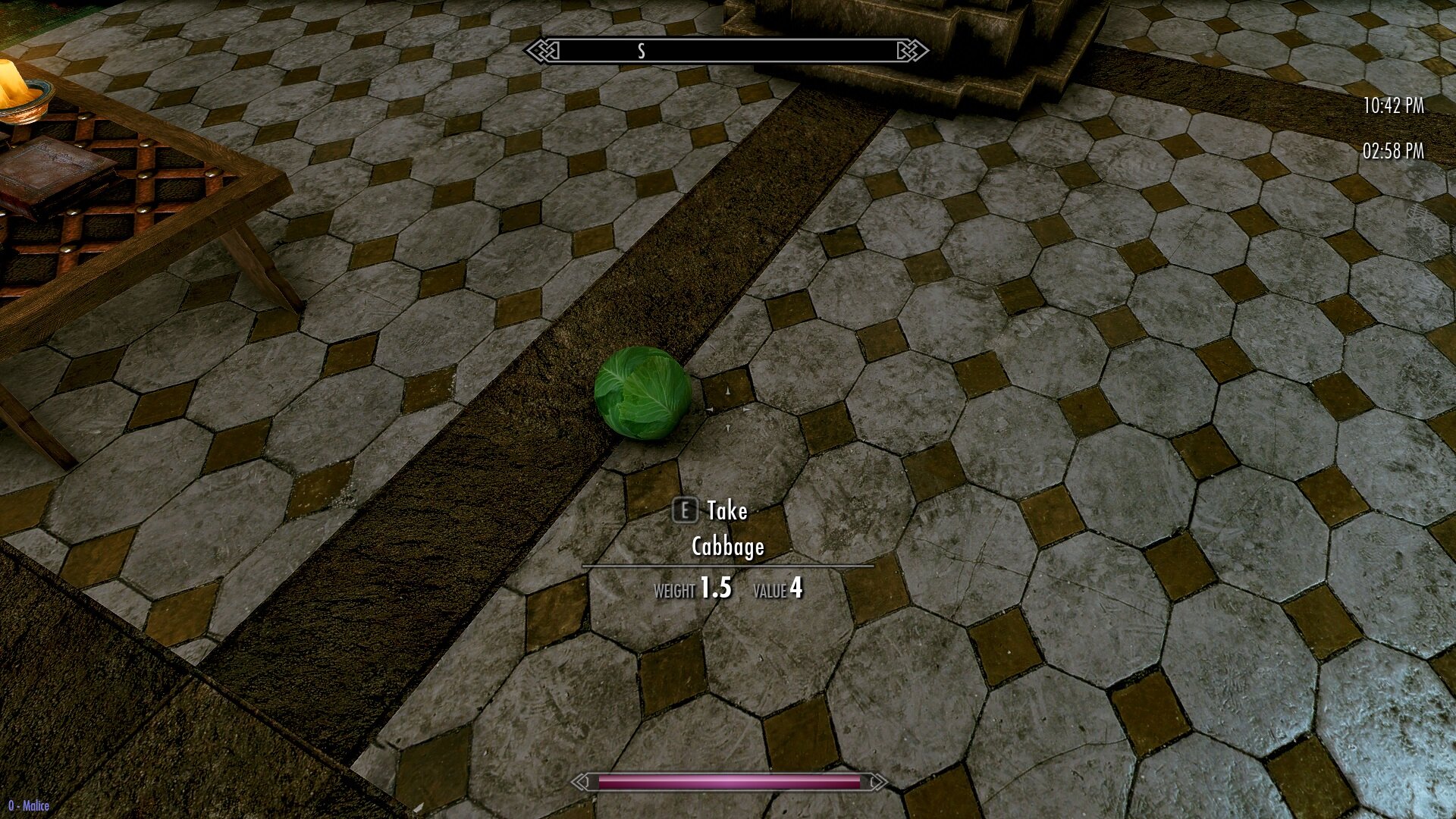 "Blood and sand. She should change her name to Hilde the Rear." 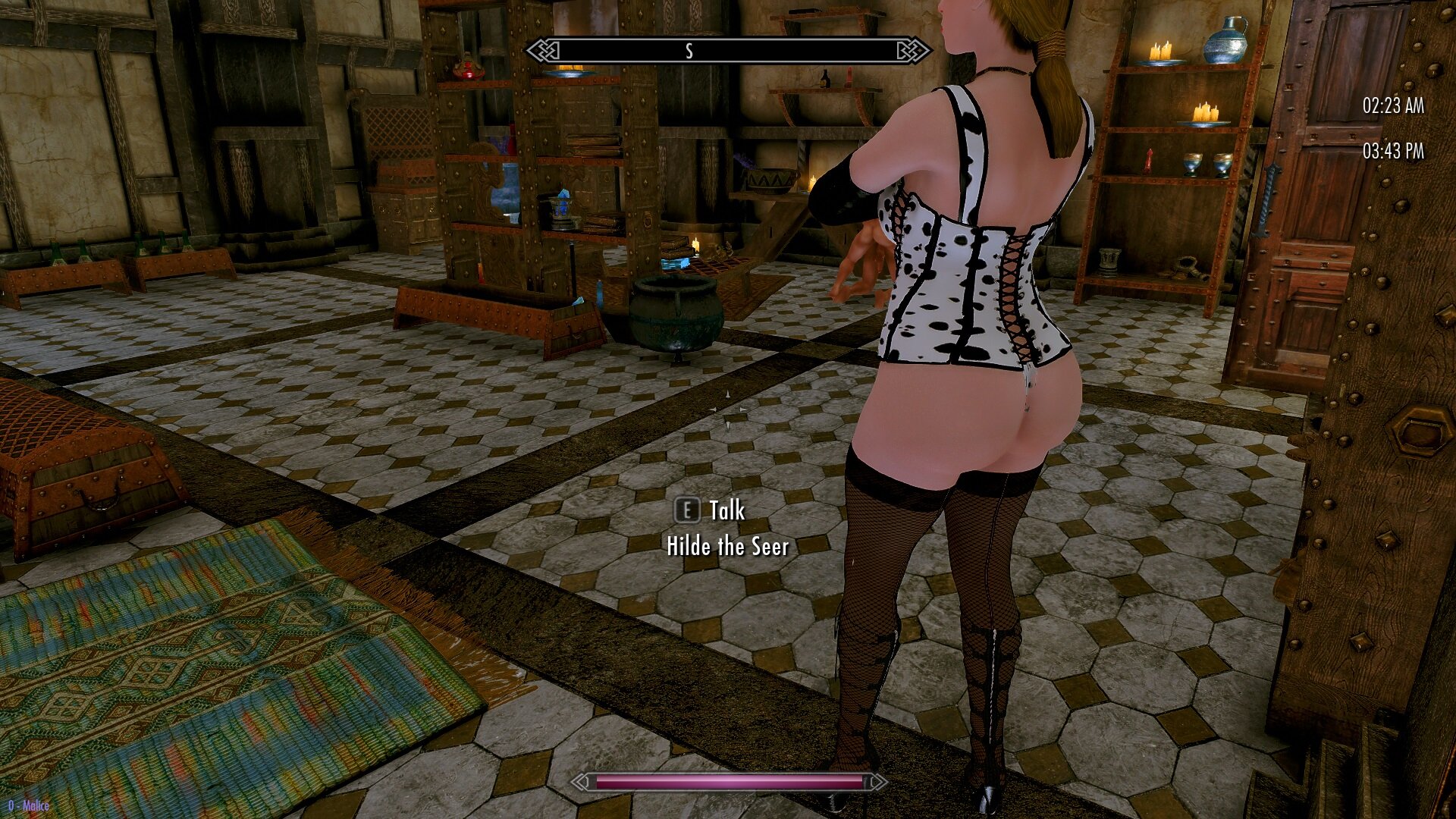 You can tell we are in the palace by the quality of the furniture.

The chaise longue is from Lord's animation pack. 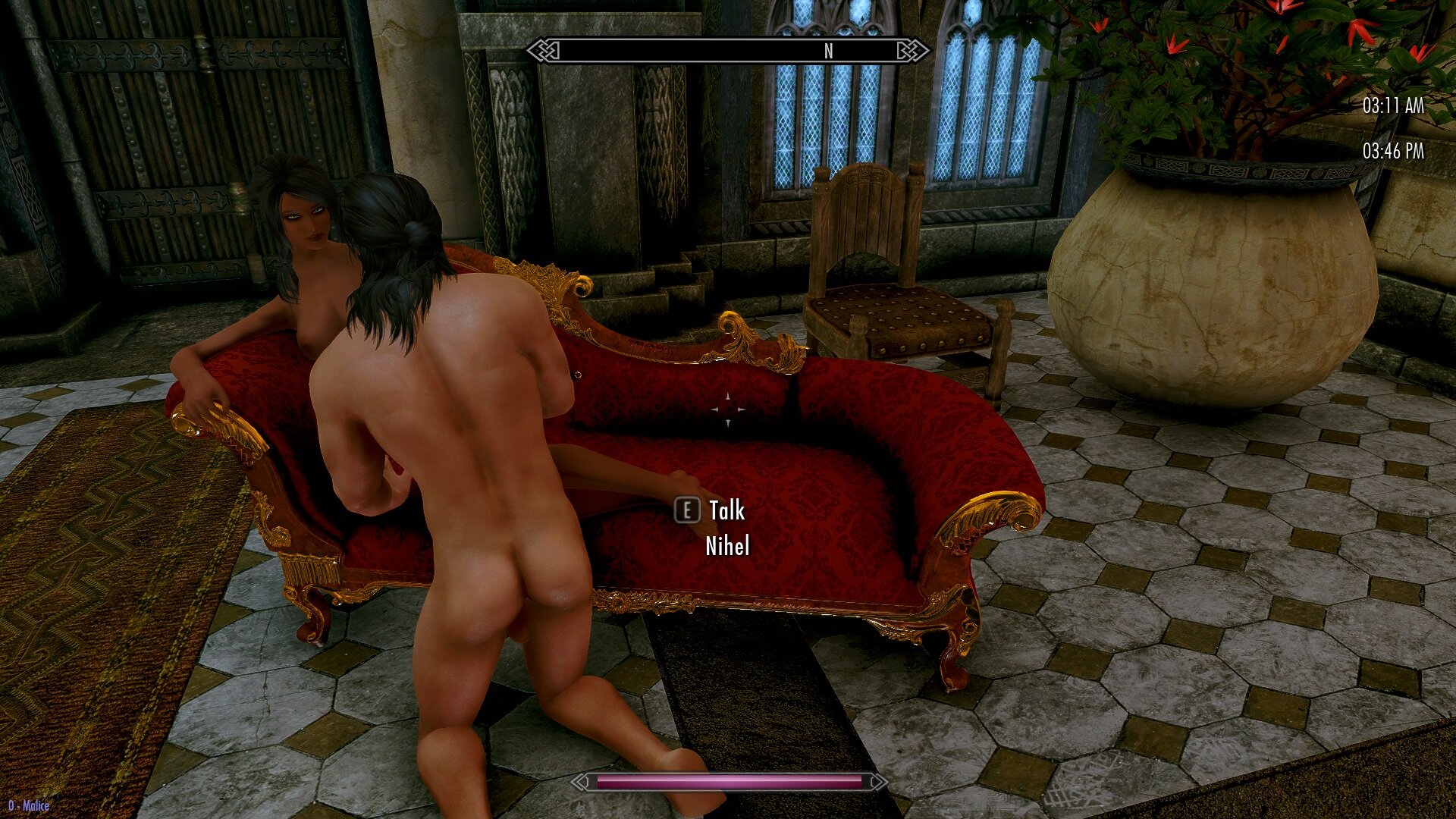 I've discovered a use for Coda.

When's the last time that floor saw a mop and bucket?

Not sure where to go after Solitude. I've still got Potema part 2 to do so we will be back here for that. When I've done Potty 2 I usually do the north coast. I haven't been to Riften or Falkreath yet so i might catch the bus to Riften and then bus it from there to Falkreath and see where we are up to when the courier finds us.

I've got some mods I want to install and have a look at as well. ?