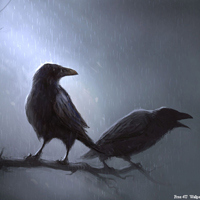 Forget the Daedra... They are not plotting against me as much as the divines themselves... Mara in particular these past few days... It started with 'Hello', as it always does. Adrianne Avenicci is a feisty Imperial woman. She is married to Ulfberth War-Bear and this is where I started to suspect Mara having a jab at recruiting me for her cause... As the Goddess of love, she is probably incensed with me for keeping Hadmir on a leash this long... Lady, I love him in my own way! Anyway...

Adrianne and Ulfbreth seemed to have little fire between them the day I walked in to Warmaiden's. Sure, they were intent on selling me their wares, but by the setting of the sun they went their separate ways until nightfall was but a memory. They might still sleep in the same bed, but I didn't really feel the love in the air.

I spent most of the first day tending the smelter and brewing a batch of Corundum metal, a tedious task at best. I can now shovel charcoal like the heroes of old though... The next day, Yesterday, Adrianne had set up a batch of steel composite, which apparently turned out very nice by the end of the day. It earned me the 'patience' award from her and I felt she was warming to me... It might have been the smelter messing with my head though.

Adrianne invited me to her house when the day drew to a close. Ulfbreth was nowhere to be found. I guessed she just enjoyed my company, so we spent the evening talking... Childhoods, current events, aspirations, hearts desires... She wanted to become a swordsmith for as long as she could stand on her feet. Her father was apparently the Steward to Whiterun, an important and prestigious position.

Ulfbreth returned before midnight and I said my goodbyes for the night. Adrianne seemed a bit sad at me leaving, but I didn't think much of it at the time. Ulfbreth looked... Well... Not exactly drunk, but Nords tend to weather brew well...

When I returned to the inn, I sat down at Hulda's bar beside a Nord man with long, fair hair and a man with short hair. Both looked surprised when I ordered three tankards of Nord Mead. Hulda placed them in front of me first, but I waved two towards the pair sitting beside me.

"Two for the pair of long faces, just one for me Hulda." I said and collapsed on the counter.

"Why you..." The short haired mountain of a man said, but he was silenced by his companion.

"Hrongar, there is no need to be offended. This young lady is right. We are bringing down the mood somewhat." He gestured towards the rest of the inn. Everyone was unusually quiet for a normal evening. Even that lecher of bard seemed out of songs at that moment.

"So, what brings you to Whiterun stranger?" The long haired man asked.

I told him I was traveling back home, to Hjaalmarch Hold. When he asked where I had been I told him I had been on a pilgrimage to High Hrothgar. I wasn't far off to be honest...

"Ah, the seven thousand steps. I have also made that journey. High Hrothgar was like another world back then, probably even more so now. Did you know the Dragonborn discovered his gift here in Whiterun?"

"The Dragonborn? You knew him?"

"I know the Dragonborn, yes. You speak of him as if you know more of his fate though."

"I heard he defeated Alduin and that he hasn't returned to the Greybeards yet."

The man raised his eyebrow. "And where have you heard that? If I may ask."

"I spoke to the Greybeards..."

"Did you now? Then they have started teaching the way of the voice again? Do they accept students again?"

"I don't know. They did say these troubled times require wisdom..." I said and raised my tankard and shouted "Here is to the wise! Here is to the brave! To Skyrim!"

Words are the fuel. They fuel the spirit of man... All those present at the inn simultaneously raised their drink to Skyrim at my shout...

"Your words could inspire a battalion, nay, a legion... Yes, Skyrim will endure. Thank you, friend, for raising our spirits. I would be honored if you would join us for dinner tomorrow evening."

"Sure thing. I'm probably going to be spent after another day at the smeltery, so don't expect great feats of inspiration, alright?" I said and extended my hand.

"The name is Thermis. Nice to make your acquaintance."

The man accepted my hand and shook it with a fair grip. "The pleasure is all mine, Thermis, My name is Balgruuf the Greater. I am the Jarl of Whiterun Hold."

So there I was... exchanging pleasantries with the Jarl... Though I suspected I'd trump his surprise by quite a margin the following day...

To my surprise, Adrianne didn't have me tend the smeltery today. Instead, she told me to help her around the house for the day. Ulfberth was busy sharpening a dozen swords... It felt like a set up from the moment I set foot in the shop, but curious... Adrianne contrieved a reason for me to follow her upstairs... Gods what is it with all the lonely hearts! Ulfberth, man the fuck up!

I guess she was relieved when I grabbed her from behind and pressed her against the wall. Under her shallow breath she stammered; "Please... please..."

"Please what?" I asked and felt her squirm around my fingers which were making their way towards her crotch.

The what soon became clear when I failed to slip my fingers into her...

Where there should have been a welcoming opening, I felt a series of rings and something that felt like familiar and infuriating... a lock... In a swift move I dragged her over to their bed and dumped her onto it. Her skirt was off in mere moments. Before me lay a woman with pierced labia... the piercings had been used to lock her entrance away. She looked sad about my reaction.

"Why? Who? When?" I asked her and she turned her head away from me.

"Slavers kidnapped me when I was traveling. Ulfbreth came and killed them, but they had already mutilated me like this."

She looked like she could break down in tears at any moment, but I picked her up from the bed and hugged her, to her surprise. I backed off a pace and dropped my cloak, revealing the collar I had been hiding for nearly two weeks.

"Bandits... I was taken during a raid on my home some time ago. I don't know how long I have been away, but It has been quite a journey." I told her and she hugged me tight.

"I was going to ask you to remove this in exchange for a bit of labor. But you are in luck... If you have the lockpicks I can try and rid you of that lock."

Before I knew what was happening she had run off and returned with two dozen lockpicks...

"So this whole cold marriage thing is because of this blasted lock?" I asked while probing the lock."

"Ulfbreth never talks about it, but he's crying on the inside. He blames himself for not being there when I needed him most. He is wrong though... He was there when it mattered... But try telling that to a stubborn Nord." Adrianne responds and quickly covers her mouth.

"Keep it up lady and I'll stuff that soulgem you keep under your pillow where the sun doesn't shine..." I said in an attempt at levity.

"I wish you could..." Adrianne responded to my surprise.

"If only I could properly reward Ulfbreth for saving me, but allas... He is too big for my... other hole... and my mouth for that matter..."

With an audible click the lock released, breaking the seal on Adrianne's life. Tear sprang from her eyes and she is about to start crying me a river, but I pressed a finger to her lips.

"Wait here a moment... I'll be right back... Hold that thought!" I told her and rushed downstairs. Outside, I dragged Ulfbreth from the grindstone and pushed him inside the shop. He looked rather befuddled at me until I pointed upstairs and said "Go. Now!" Sheepishly he followed my instruction while I locked the door to the shop.

When I arrived upstairs both Adri and Ulf were in tears... Hugging and kissing and crying... "I'll show myself out" I thought to myself and went back downstairs, exiting through the backdoor. "Another couple fixed... Seriously Mara... I don't remember signing up for this..." I mutter to myself when I take a seat under the Gildergreen, one of Kyne's blessed trees and the main reason pilgrims come to Whiterun. A priest of Talos is preaching nearby, but I care not... Nobody seems to care...

Before me a couple argues about some old sword while I write this... I'll have to put them on my To-Do-list or I fear I might be in for some divine retribution...

Anyway... Dinner at Dragonsreach tonight... I wonder if either Balgruuf or Hrongar needs fixing... I've got my eye on you Mara...