I'm not sure if 17 is too many images or not.  I was doing a thieves guild based run and took some shots with either a line occurred to me or the animation seemed appropriate.

Courtesy of Anub's Housecarl betrayal and SL Solutions, my PC plays along with the two thugs in the Ratway demanding a toll. 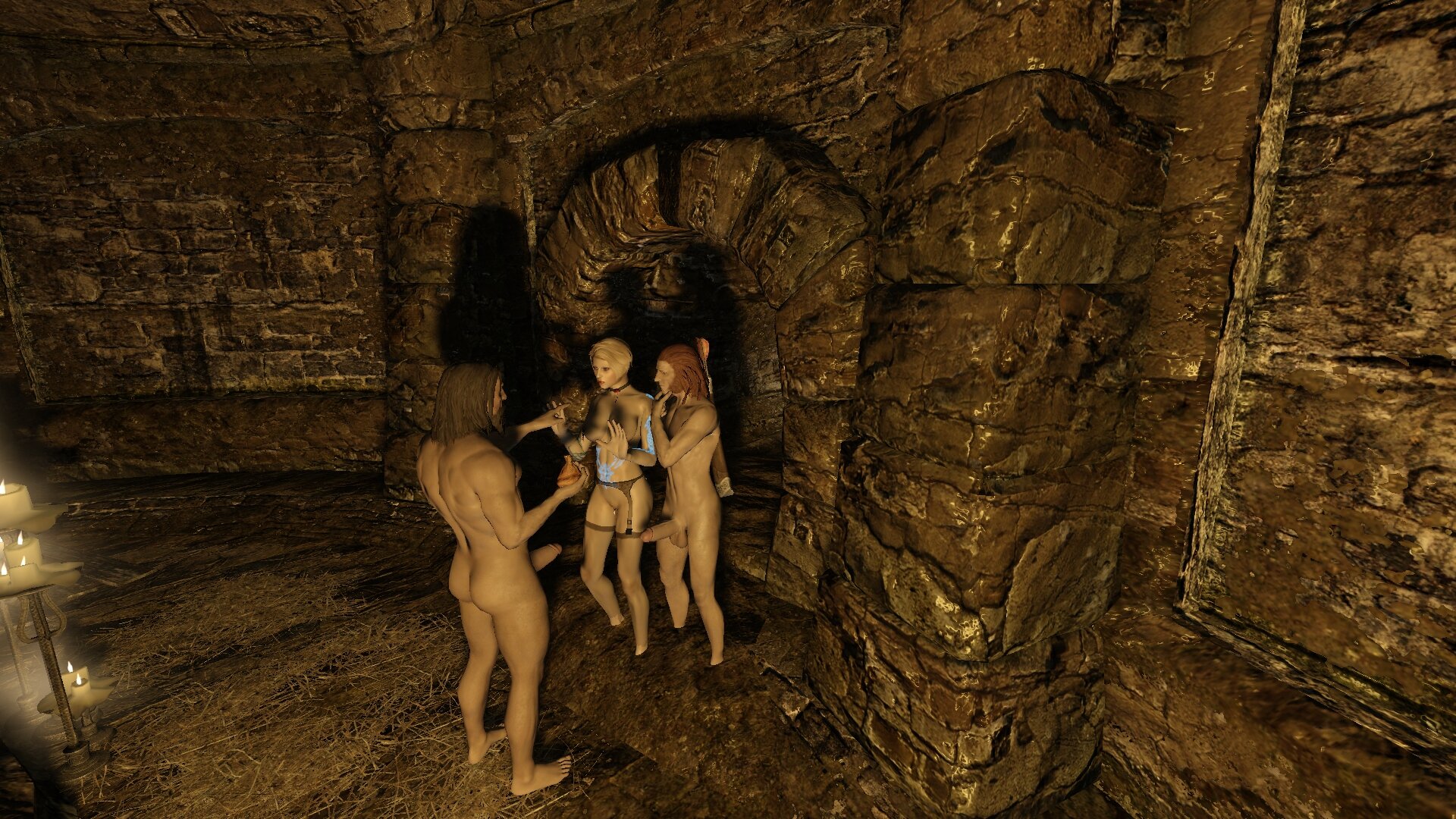 Helping Haelga "practice her Dibellan Arts" nets the required payment for the Guild instead of doing anything to the statue of the goddess my PC was following.  A somewhat twisted love and appreciation of beauty had her showing her own, and acquiring other people's without their permission. 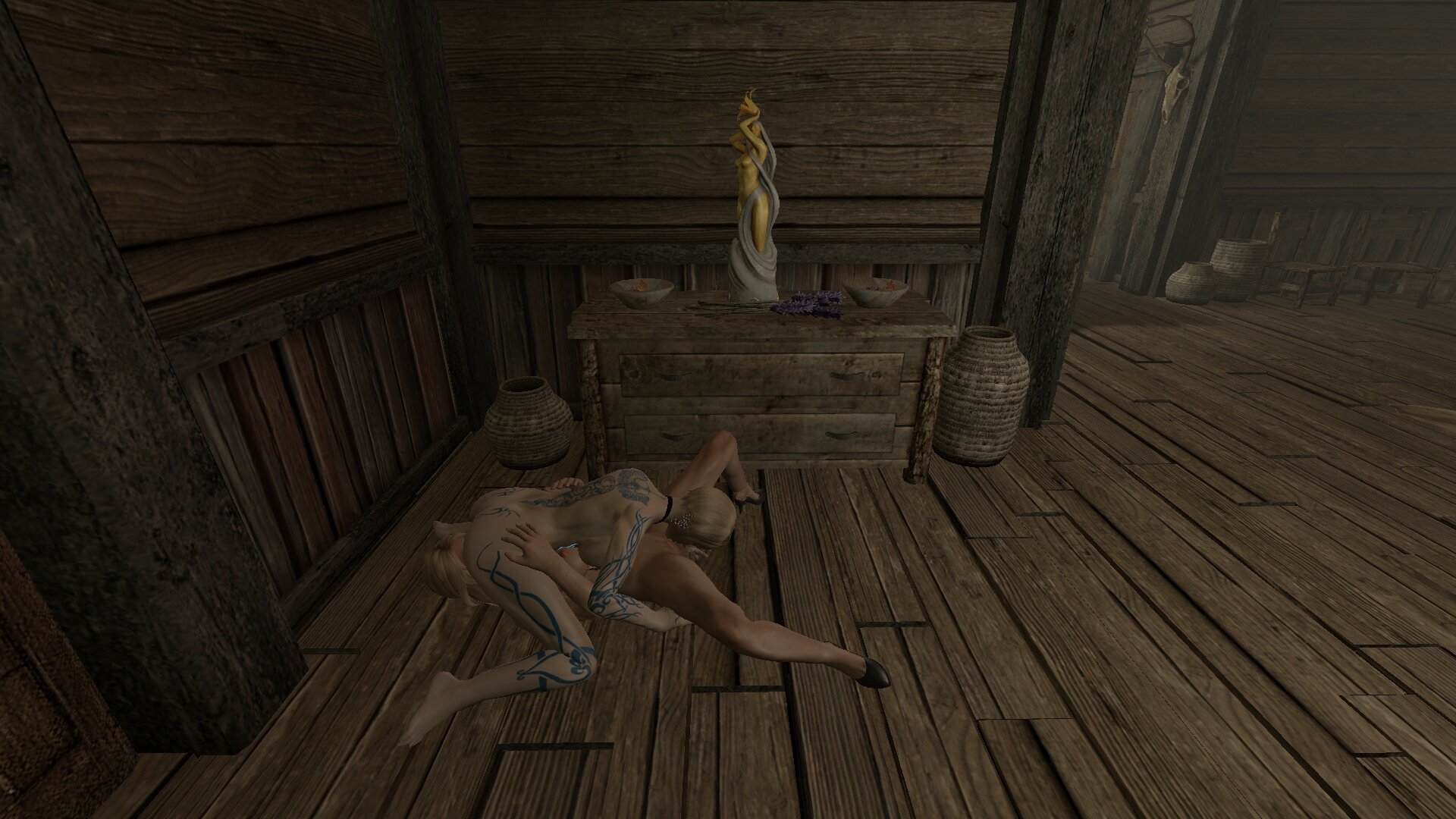 I'm not sure what was getting Pawned in the Prawn, but both the wife and proprietor got involved in this sale. 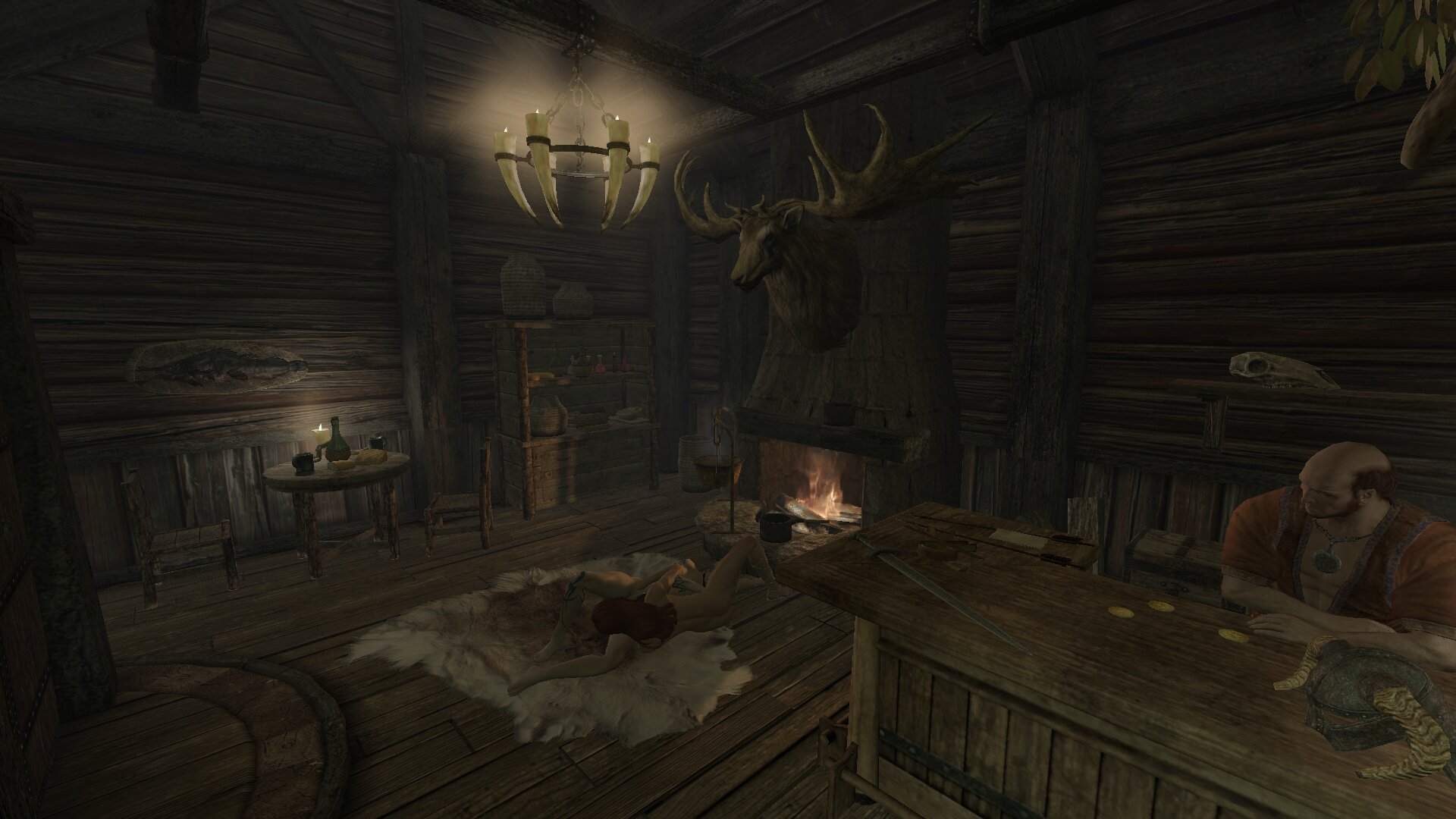 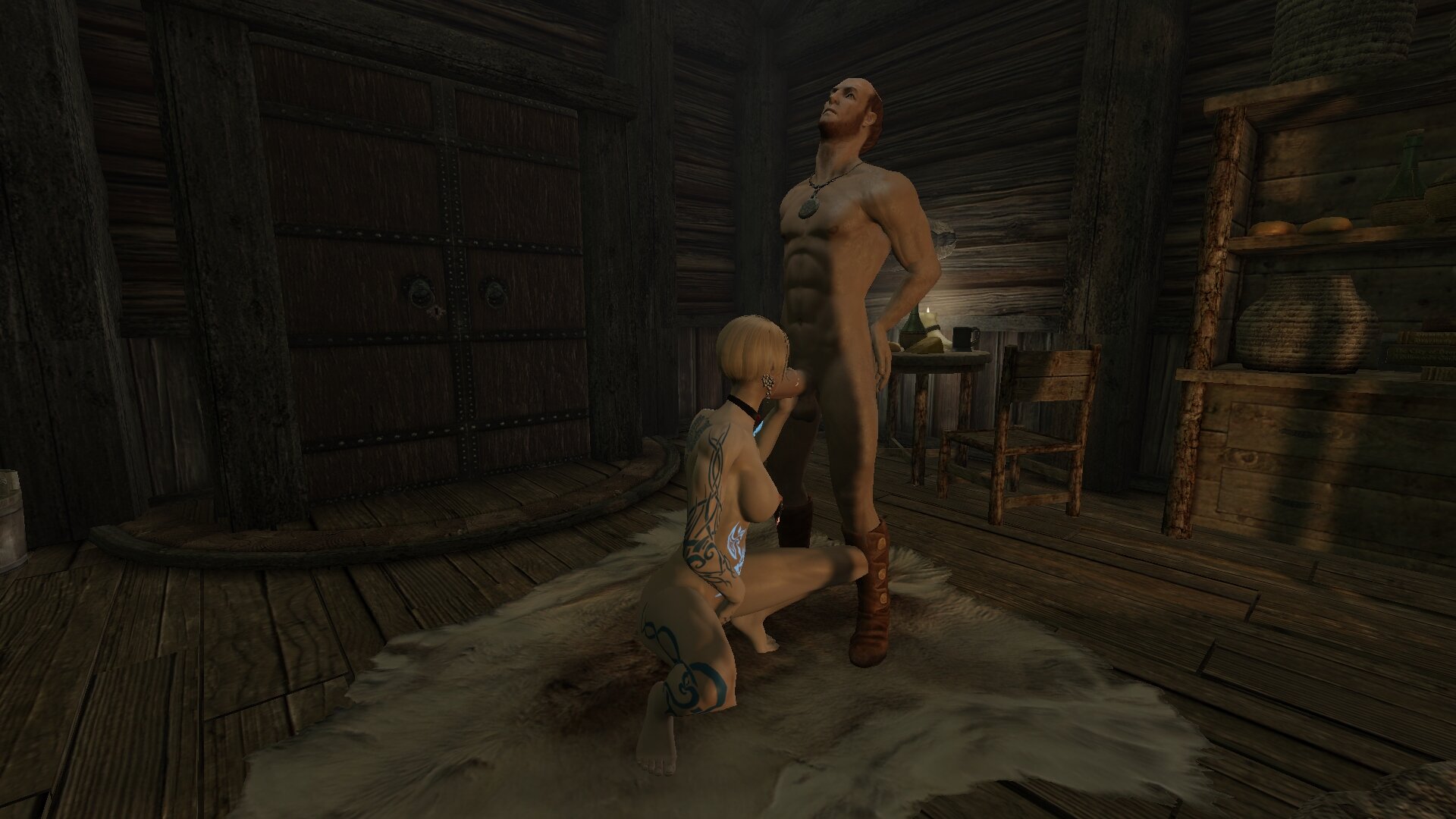 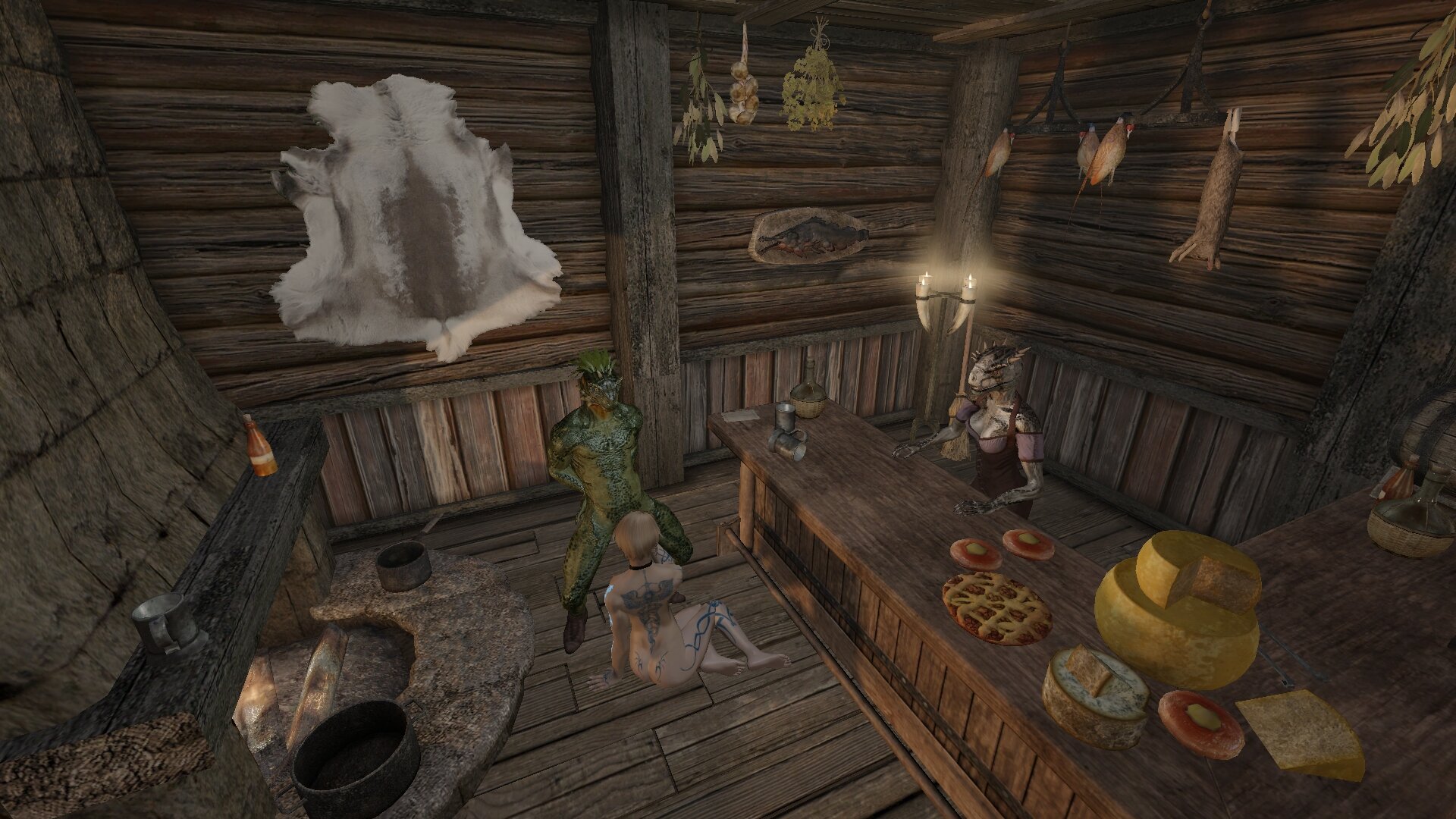 On a trip through Whiterun, I made myself helpful and carried a sword up to the keep.  Package delivery can be useful in so many ways, from just getting in the door to making yourself established as a trusted person.  Getting an introduction to someone you need to gain the trust of for further access is just Step 2. 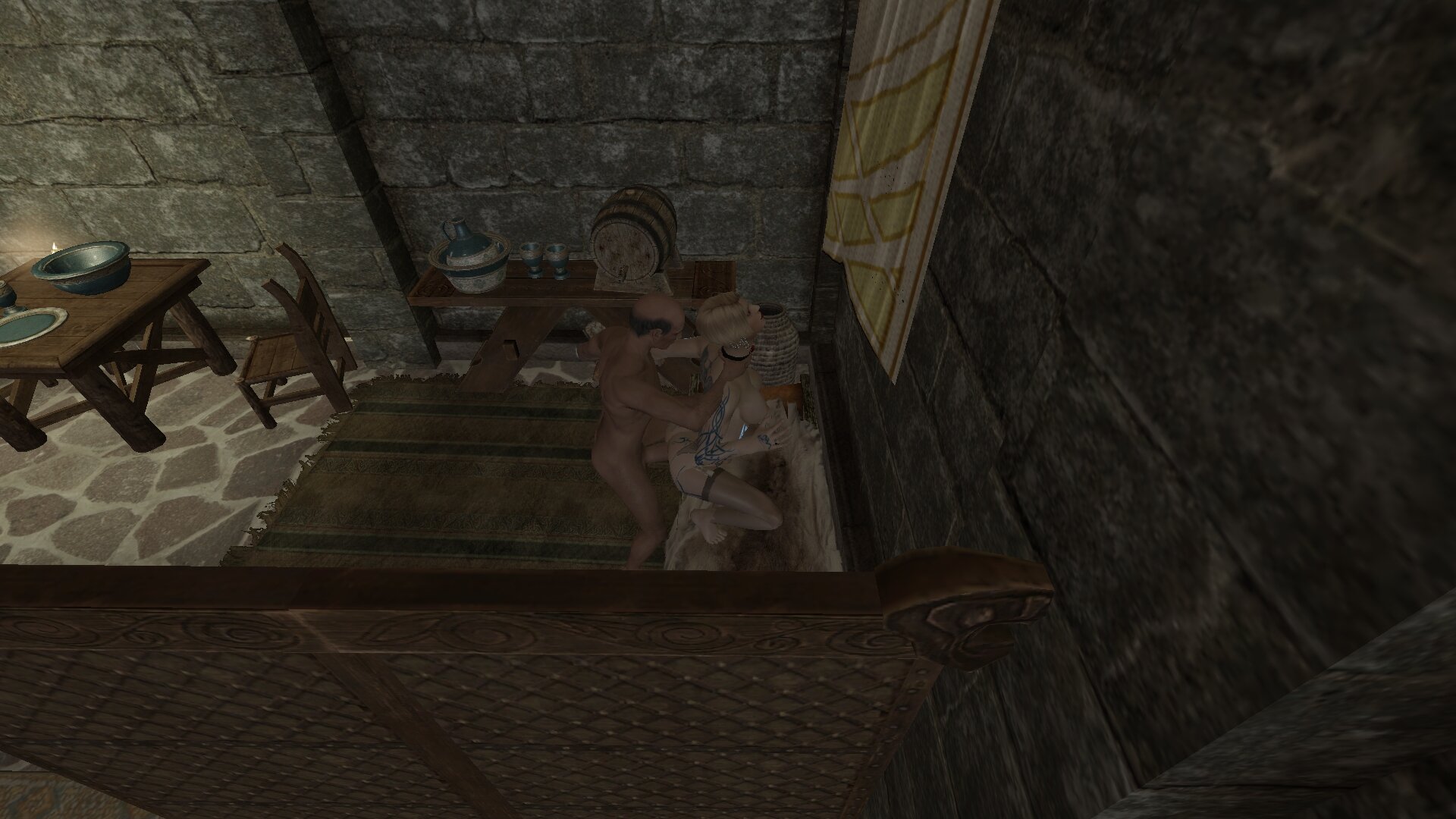 Why yes, Sabine, I will complain about your overpriced contraband.  Not to mention negotiate my own deals after I've stolen some keys out of your pocket.  I think your captain will give me a better deal, whether she knows it or not, by giving me access to your safe in exchange for a deal of my own. (This was a straight up prostitution mod letting me interact with Safia not connected to any thief related quest. Probably could have just walked down to the safe and opened it, or since I know where the locker with the Balmora Blue is, just taken it from there, but hey... screenshots). 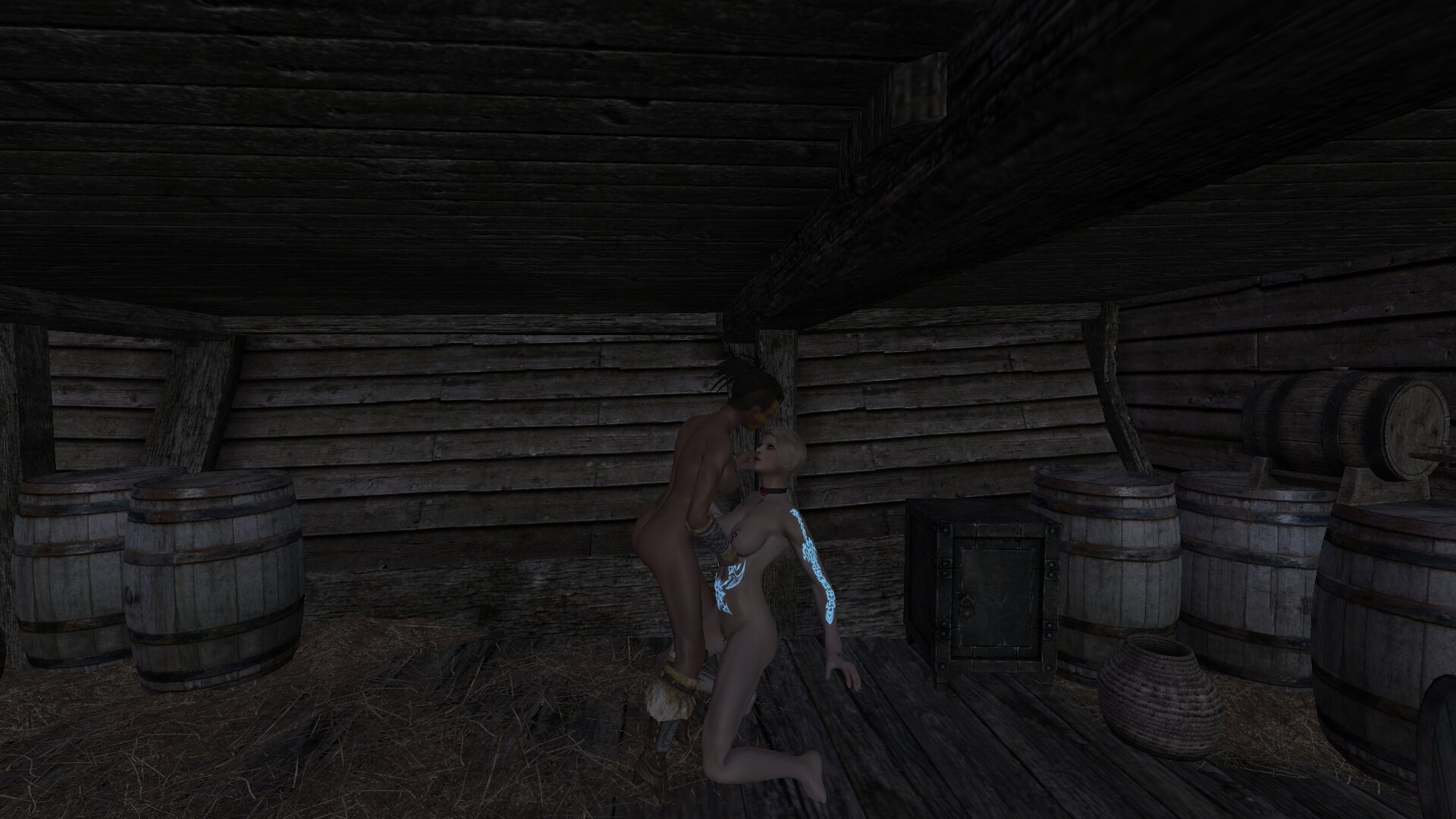 There are several ways to get onto a ship full of suspicious corsairs...  carefully sneak (the vanilla way, usually used), bloody butchery (might work, never tried it), or the "Drive everyone sex mad and slink past the distracted people" (in this case accomplished with the Matchmaker spell, but there are other mods to do the exact same thing. ABMM and SLEN's aphrodisac potions for example).

After leaving with the quest done I Matchmakered the calmed sailors on the deck into a three way under the peeping-tom moon.

Nothing to worry about, just have a little fun on deck! 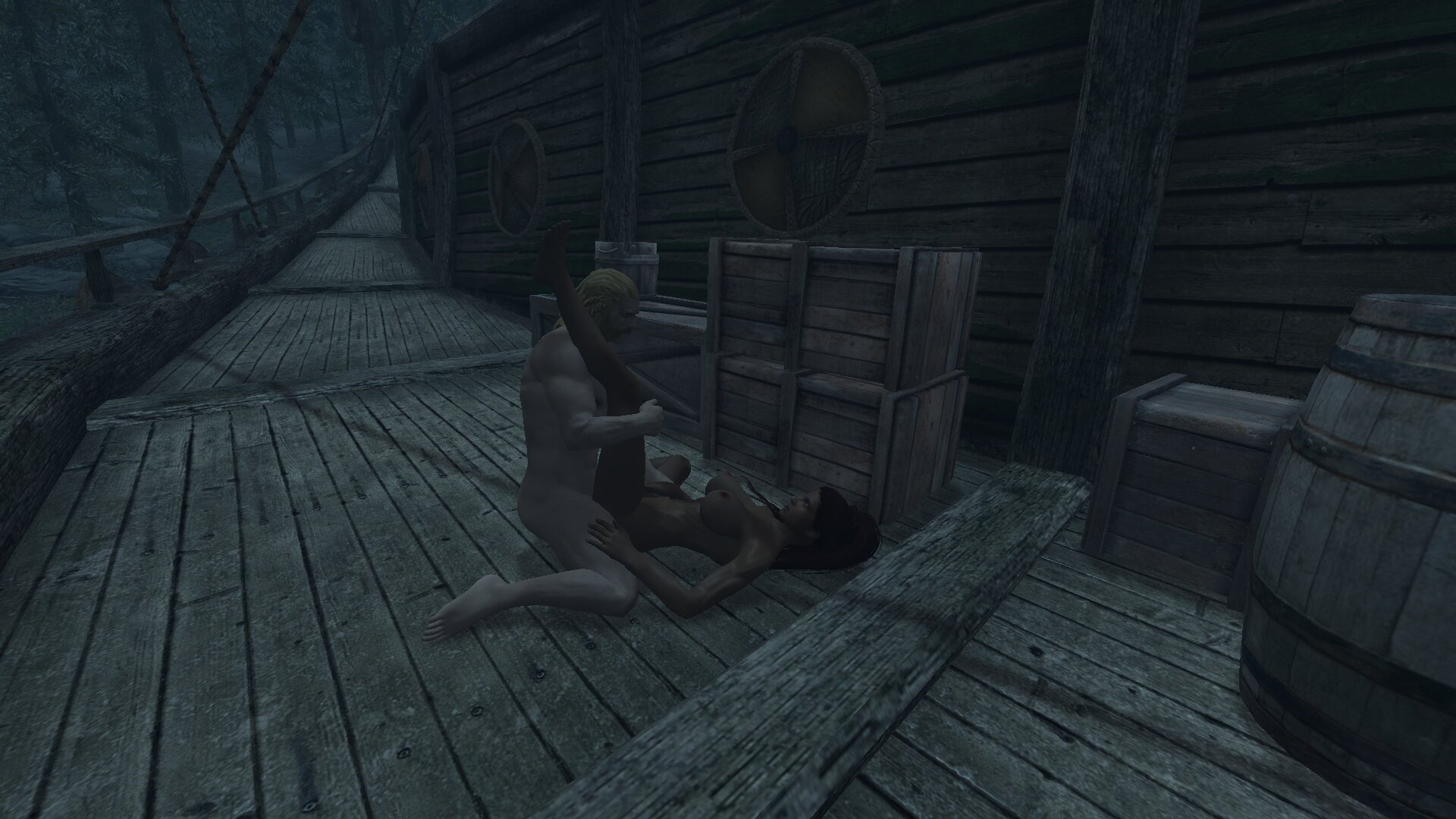 See, Masser was peeping on us.  ( didn't feel like changing the weather for a night out under the stars ) 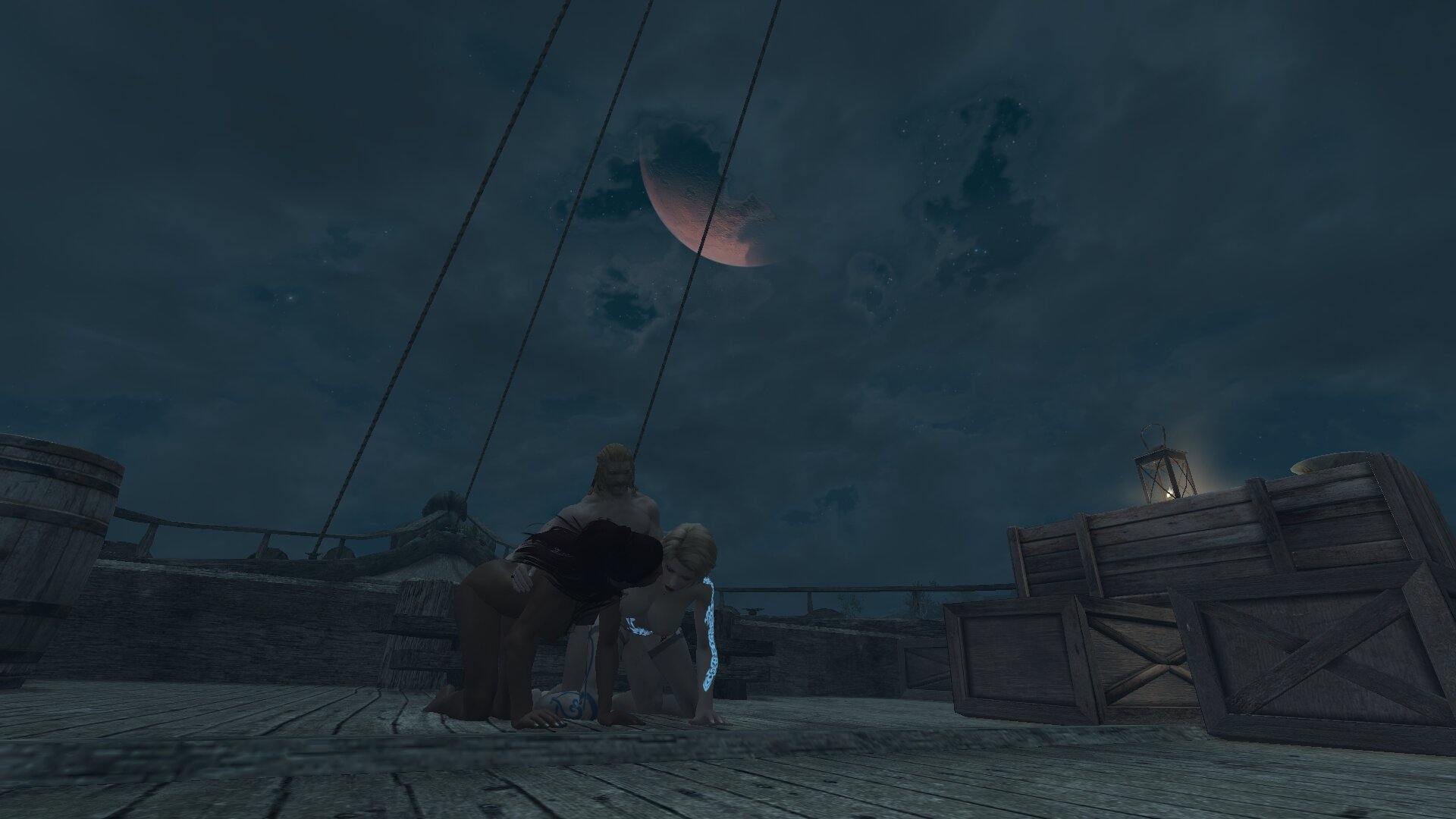 That job done, Erikur took advantage of another guild bonus perk (via Confabulation) 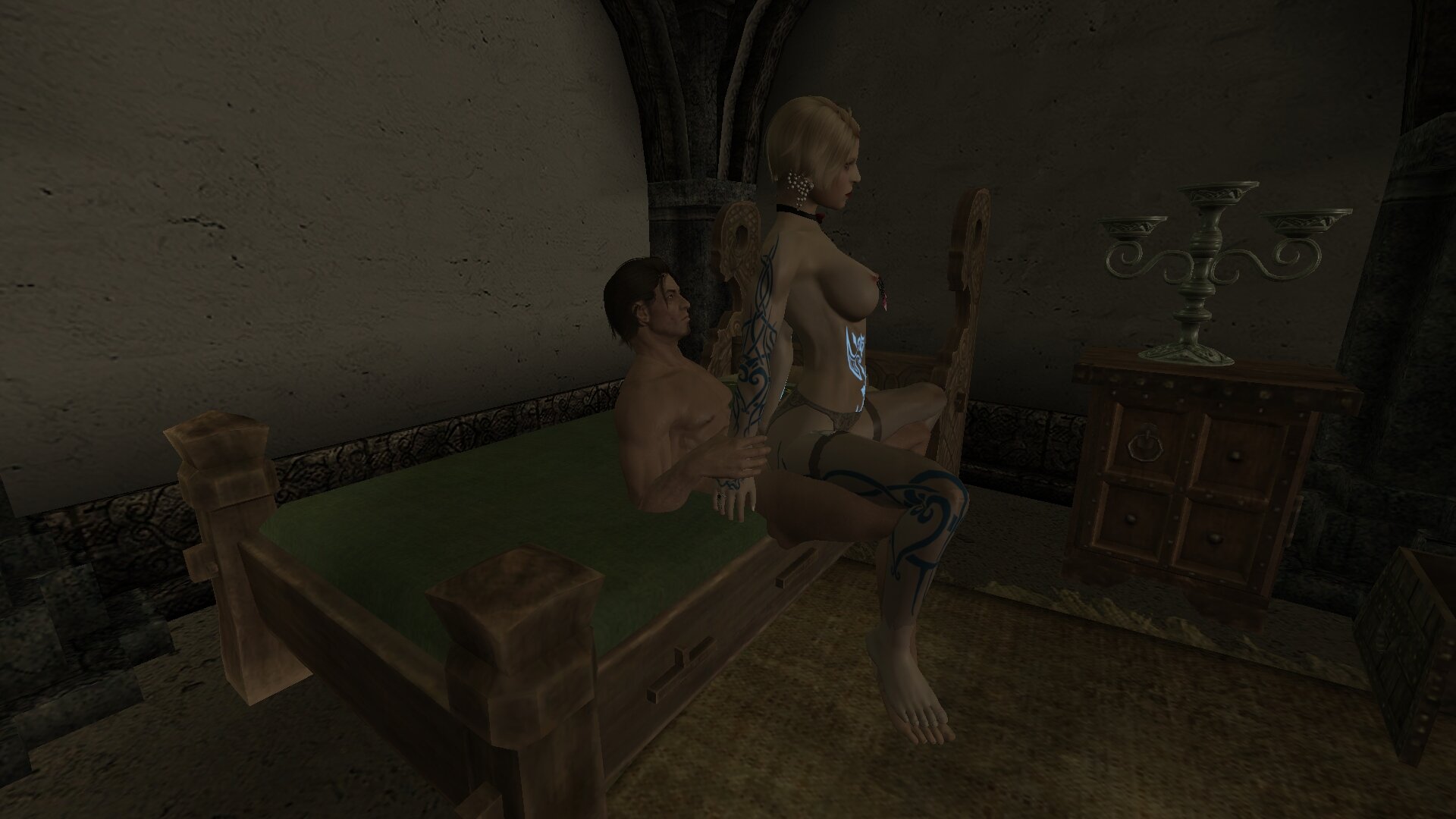 Since he is such an obnoxious prick and his long suffering sister hasn't sold him out to anyone yet, I thought I'd give her a family plan reward. (and the oddities of generic sleeping AI packages put Erikur in the little bed and her in the nice large one.  I think she's supposed to share with him and Melaran gets the single ... Simply Knock had M greet me at the door instead of anyone else which is why he followed me upstairs).

Don't mind the elf watching from the doorway, this is all for you. 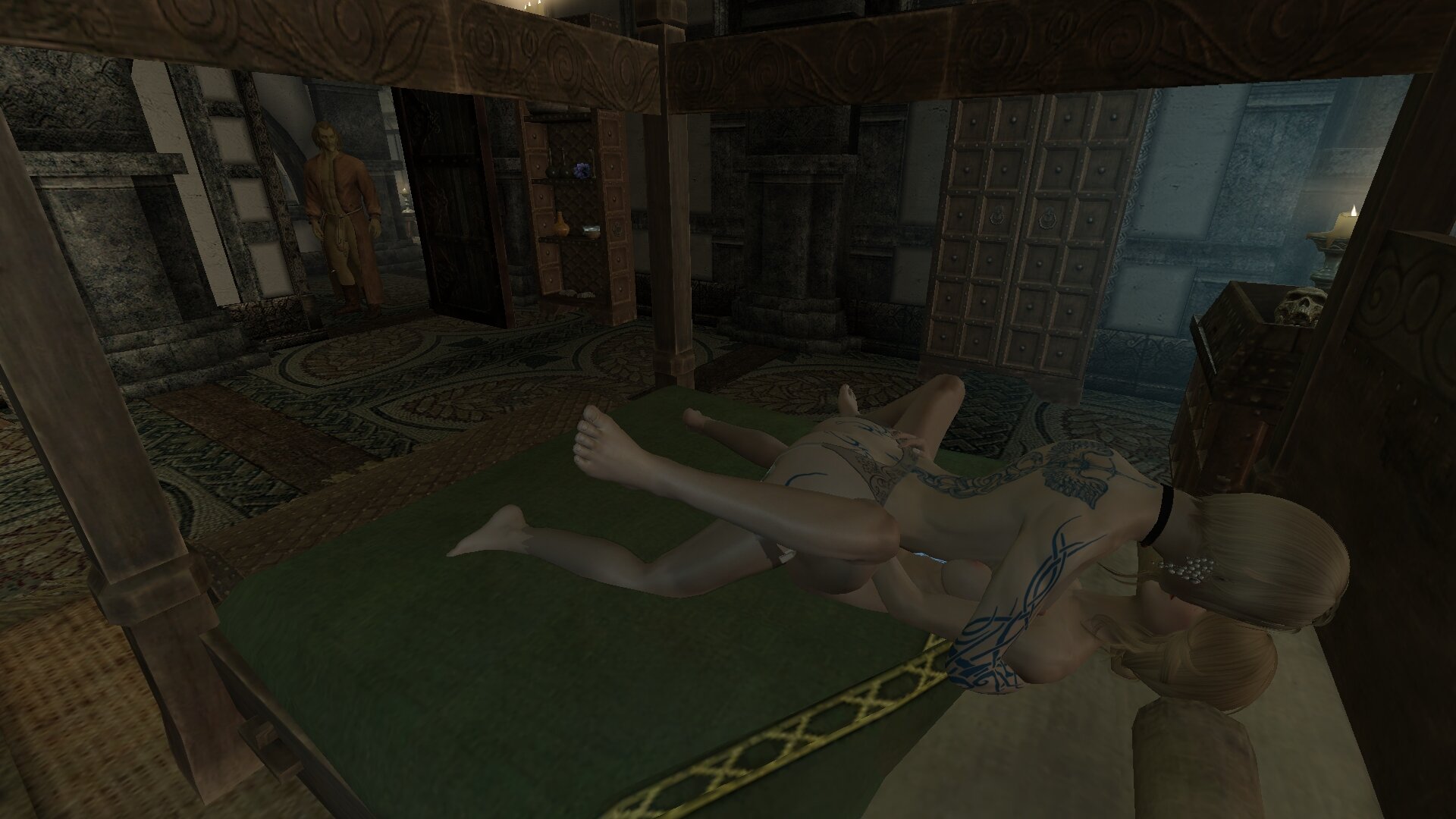 Since he was nearby, I got him in on things too.  I imagine he's paid well enough to keep Erikur breathing, but having invested a lot of work into establishing him as our foothold in Solitude I didn't want anything happening to Erikur we didn't plan and a little incentive doesn't hurt.  Especially when it is quite pleasurable.  Probably shouldn't have used the same bed, but as long as Gisli was up... well, we did. 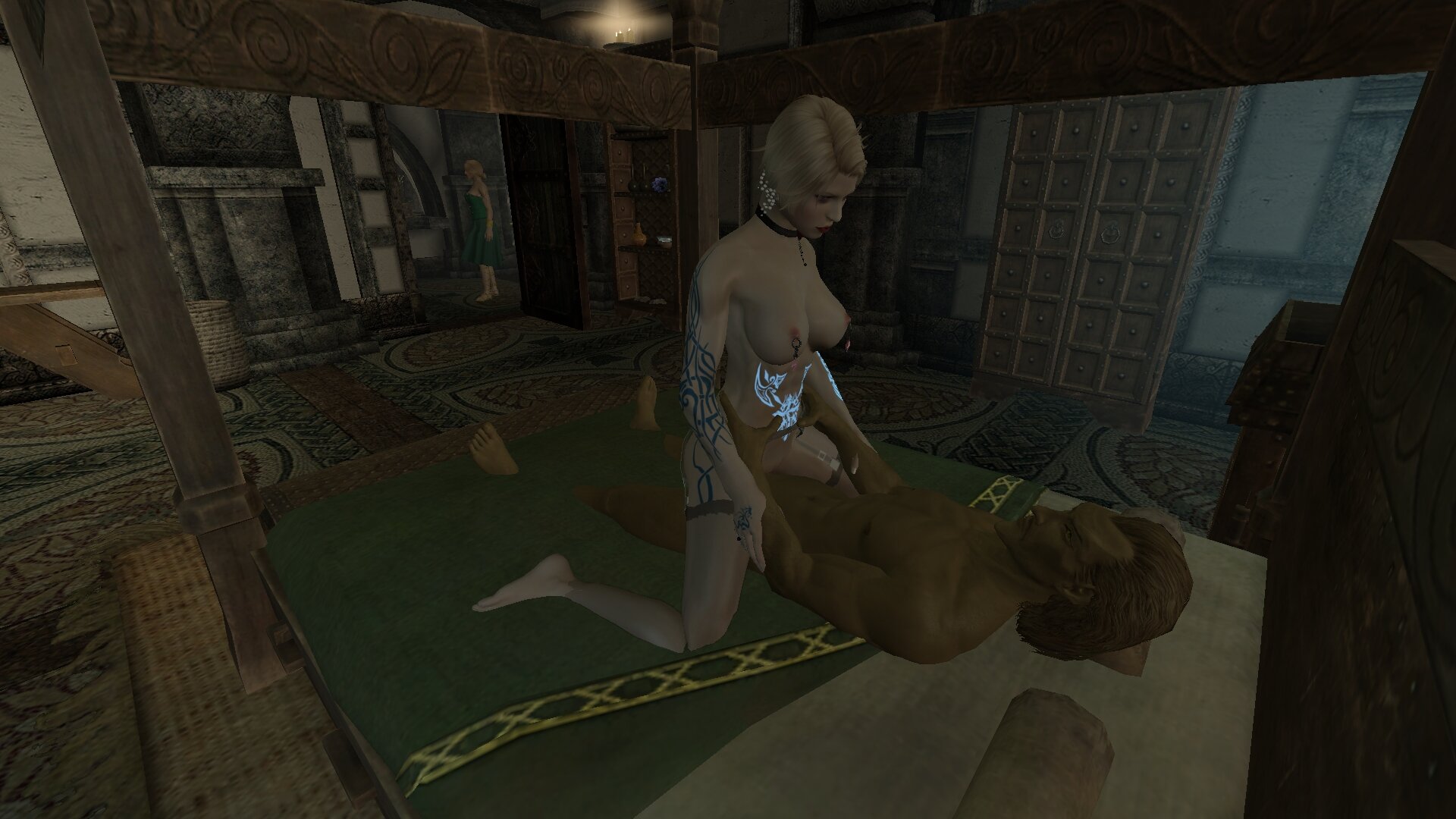 I hope I didn't just spoil the whole thing, Gisli doesn't look happy over in the doorway, but then she never does.

We thought it best we keep Gisli happy and quiet, so she got to be queen for a bit ( I've forgotten the exact animation name now, think it was Anub's Lesbian Worship ) At least as a bodyguard Melaran is used to taking a subordinate role.

Your wine, Lady Gisli.  How about a footrub? 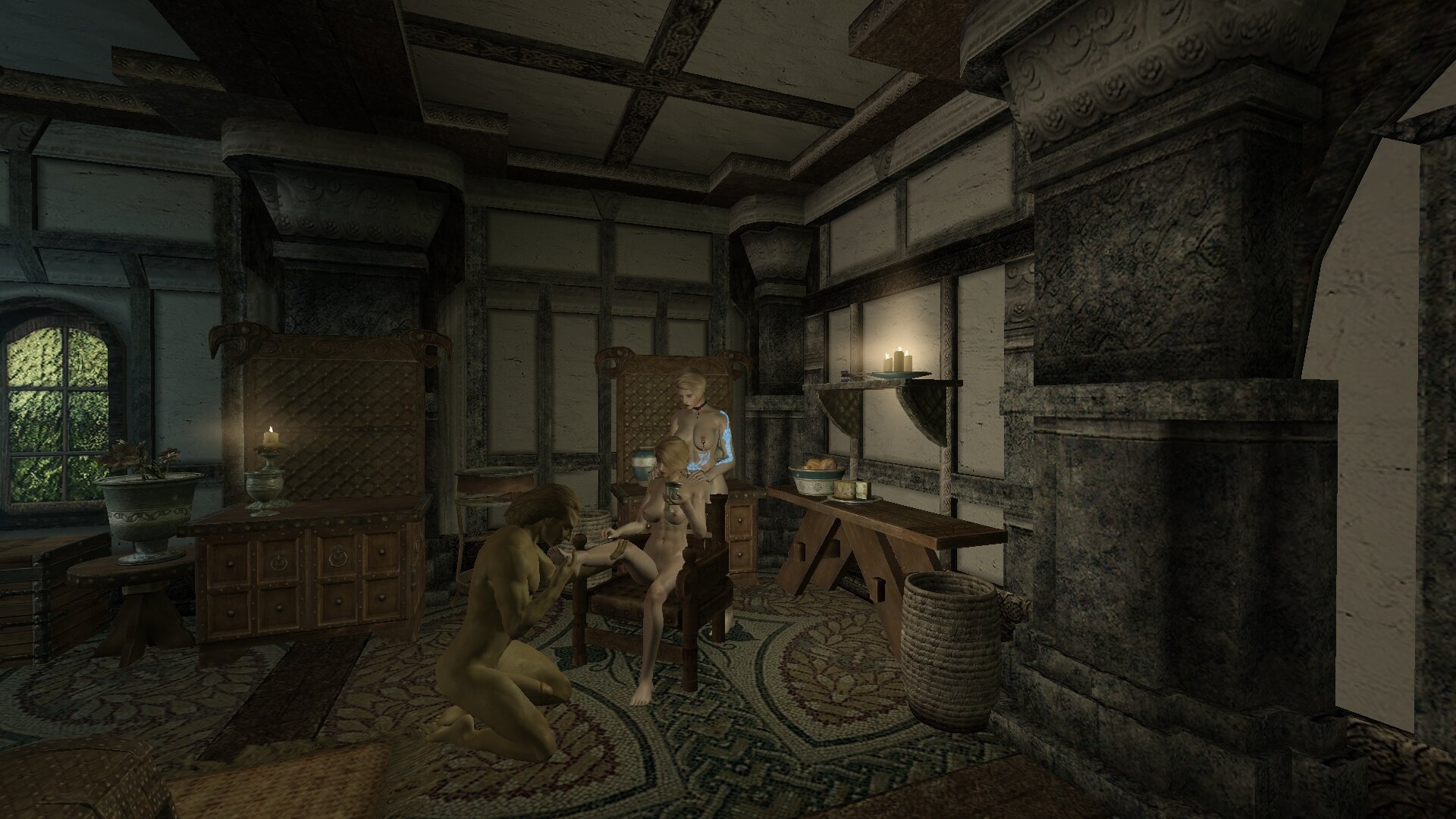 A little front and back double massage, with tongues? 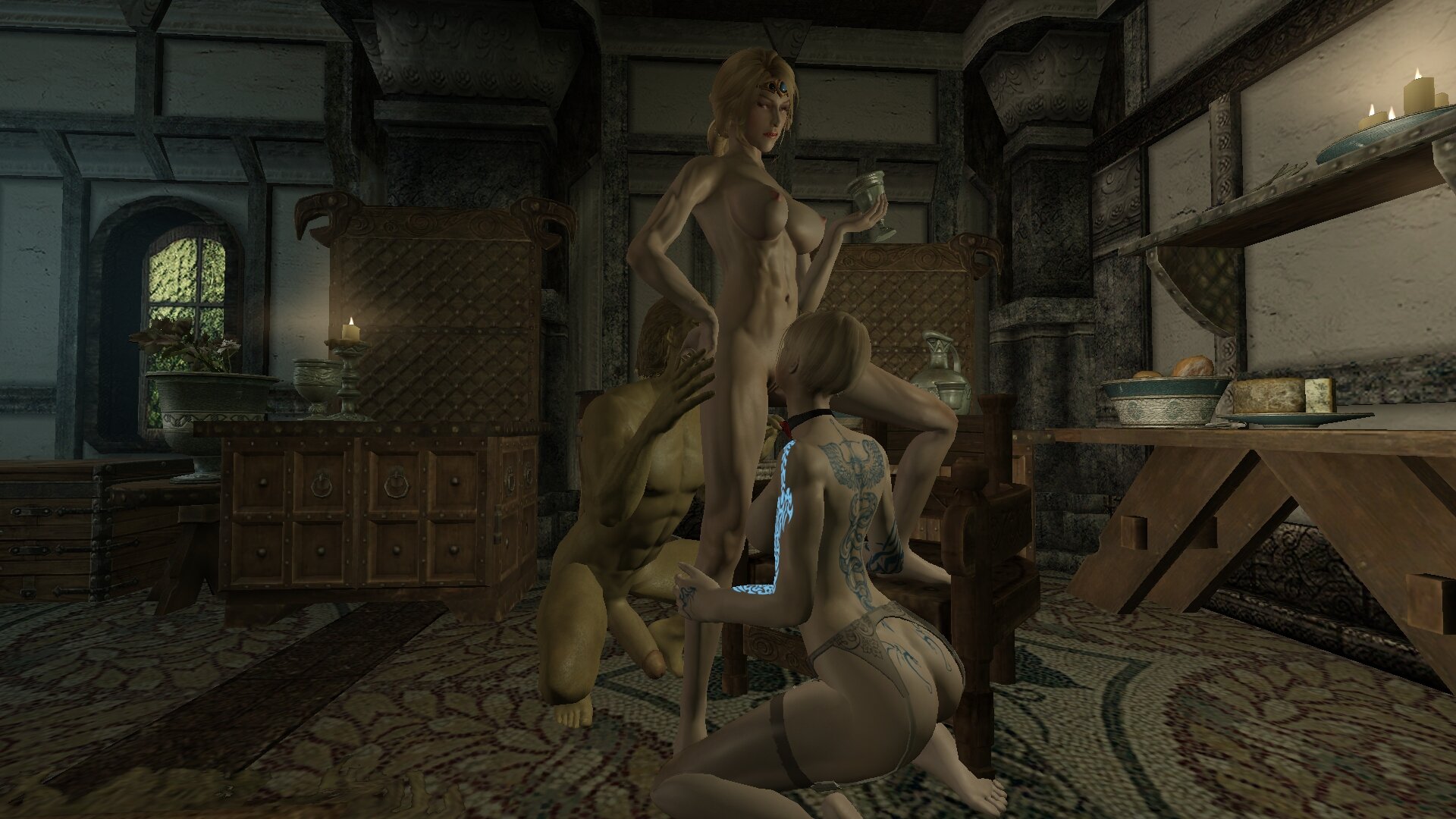 Oh yes, look down on us imperiously.

Rhorlak is just a simple woodcutter.  Probably emphasis on 'simple' there.  Now I'm sure he knows exactly what that button on the wall does and has used it and is only playing the simpleton, but I didn't feel like just whacking him since the caravan wasn't apparently wiped out, only robbed (otherwise how did Endon know where his silver mold ended up?)

No, we're not having a three way with a deer... 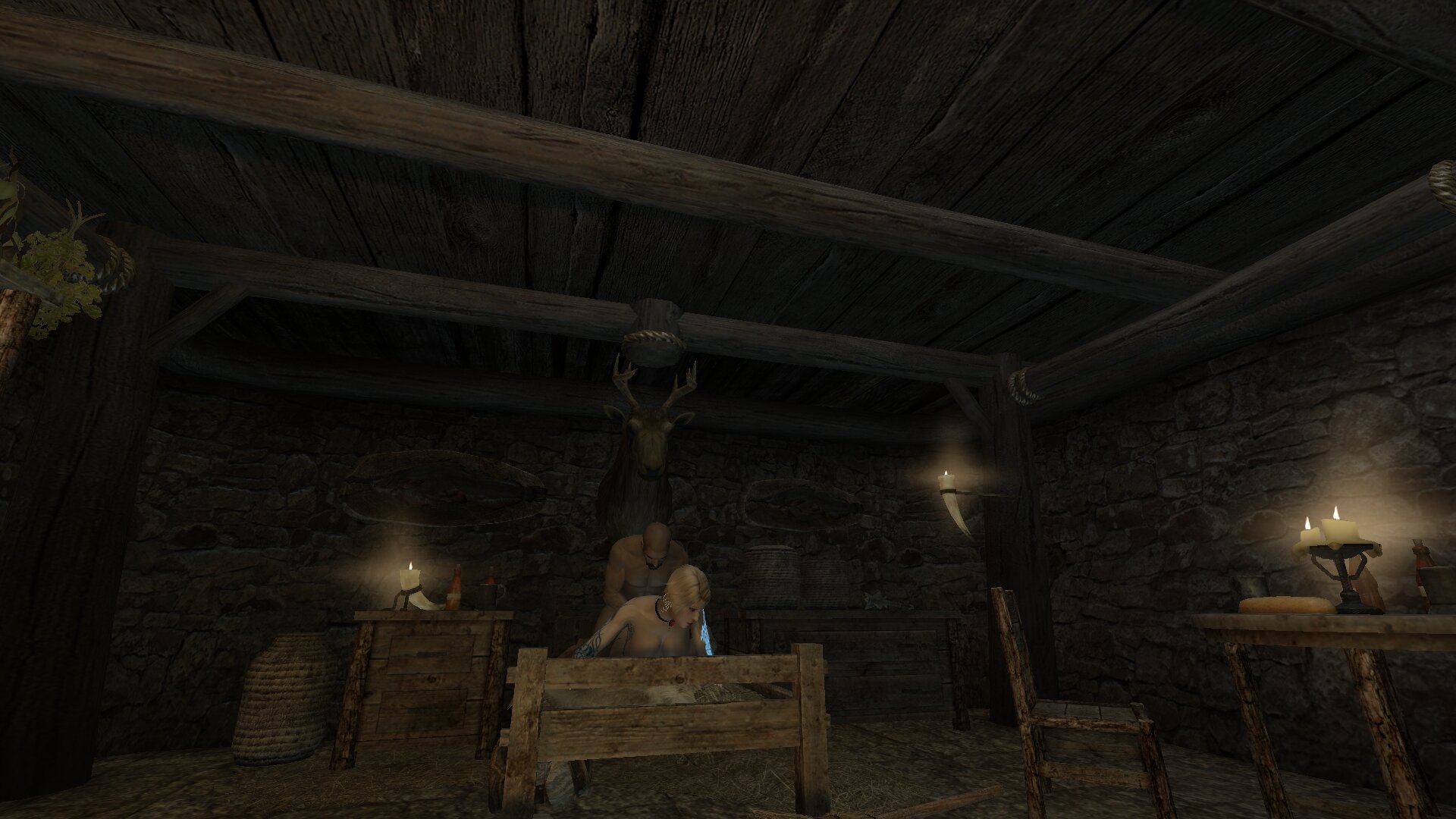 ... but I don't blame you for thinking that.

A side quest, figuring out Saadia's deal.   I have this thing about teasing people with what they're not going to get... especially when I have to give it to get them to give me what I want.  In this case, a loser of an Alik'r out of jail to get me into a hideout.  He gets to watch me ... "pay his fine".

Ya know what else happens when you get caught and kicked out of the club... 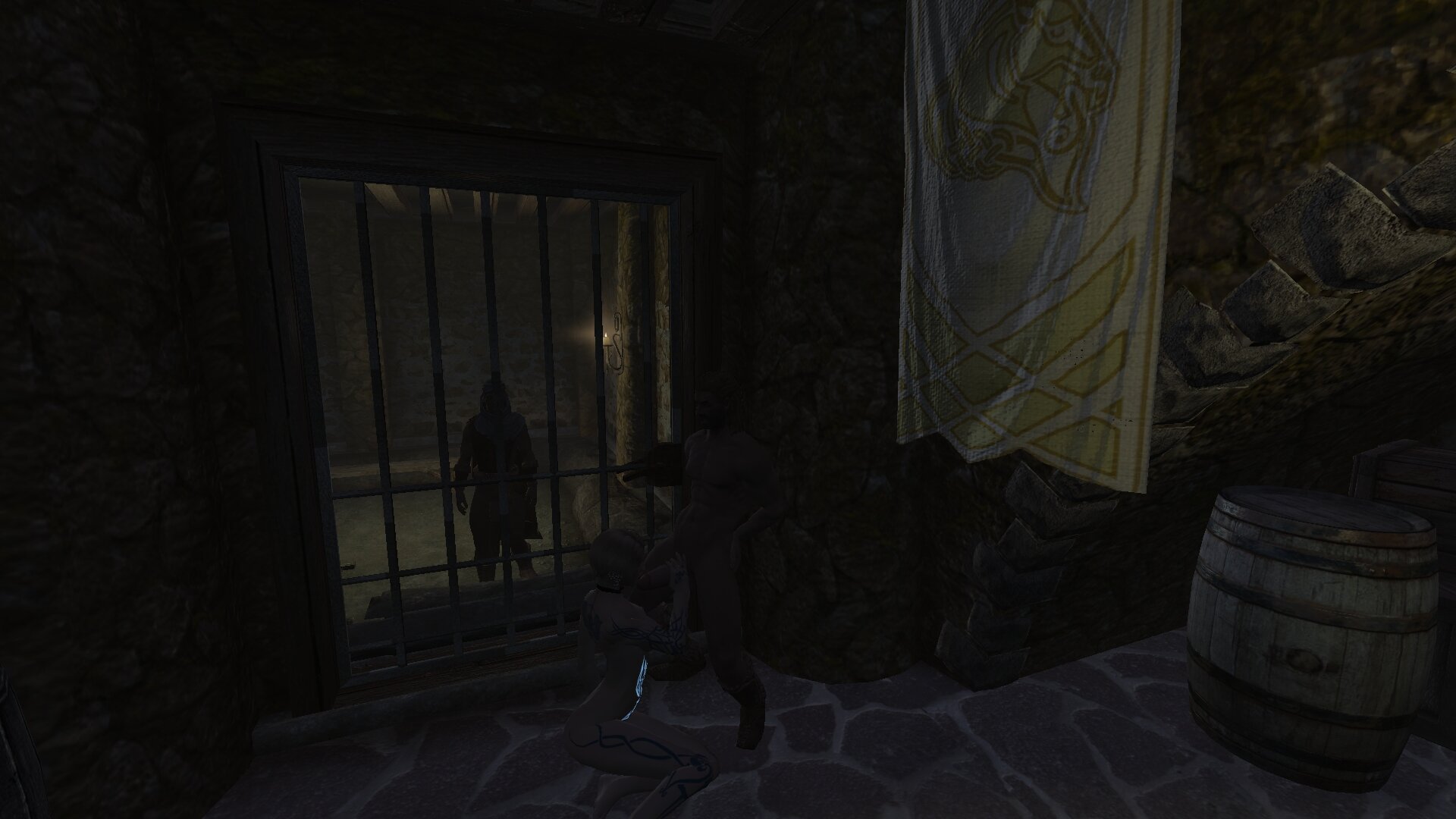 We end up in Whiterun where I've made myself useful in a variety of ways (no dragons via Unbound, so no thaneship, no saving the city or anything else that would make this moot) but having gotten an in via Proventus the steward, I make myself useful in other ways.  The guards think I'm on an errand for him and bringing refreshments doesn't hurt their attitude...

I forget which mod lets me pick certain poses... 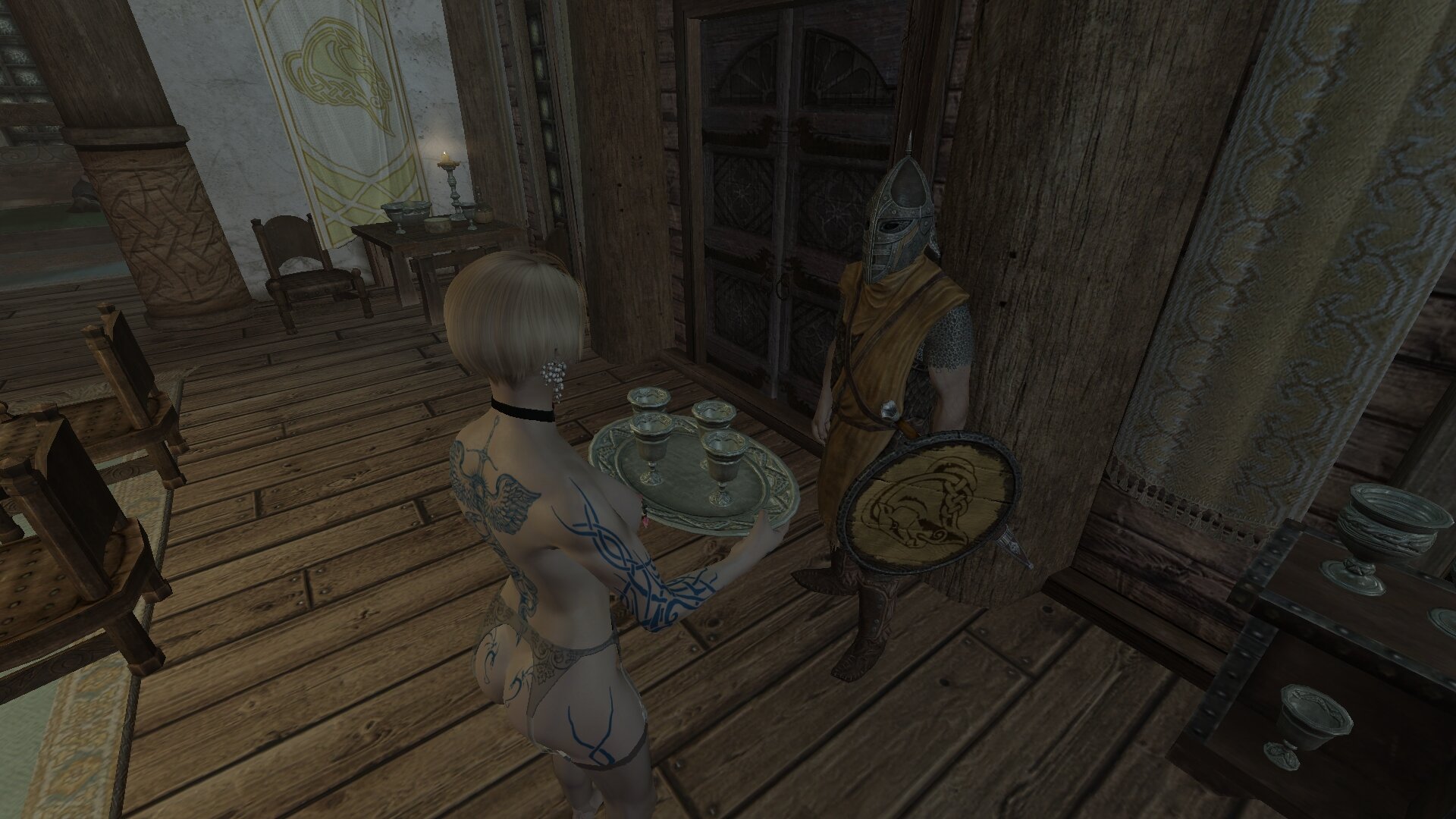 but a little 'afternoon delight' when there are no court members to guard, or catch him slacking, just reinforces in his mind, why I'm there 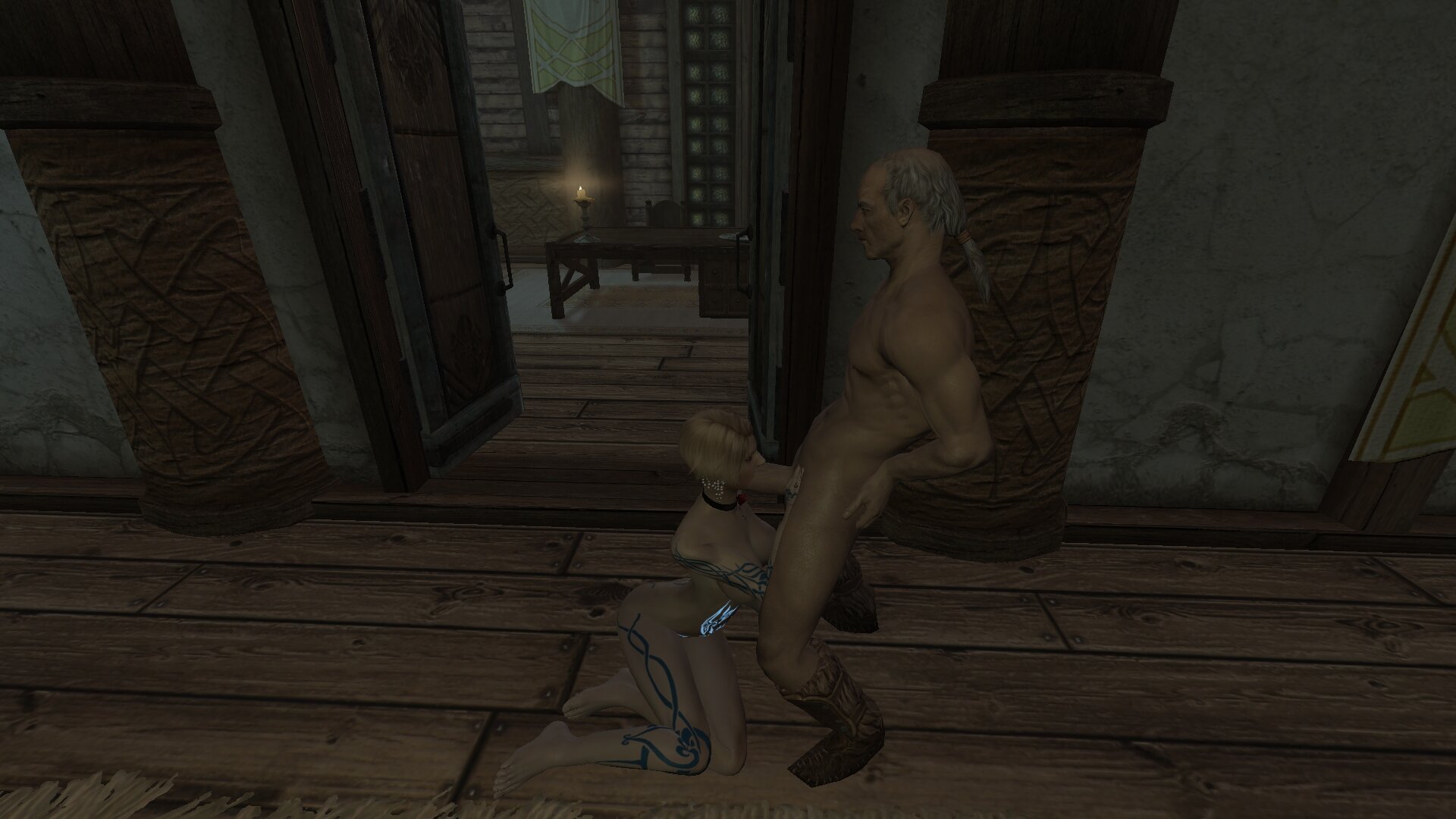 role play wise, the tray gives me a place to hide the letter I stole.   Oops, I guess he might get in trouble after all, but since no one knew it was there, maybe no one will know it was missing.