Yep Mist is back, and I've got a series of shots of her in the spoiler below (reshade makes her looks kinda weird though) but I'll also have a proper "review" of Trails of Cold Steel 1 up as well as my "review" of Trails of Cold Steel 2 and my first impressions of the third game alongside some pokemon stuff (I know, I know) the shots of Mist will be in the last spoiler if you want to just skip ahead to those.

Two things for you this time.

My mate and I were talking about the old games in comparison to the newer games and he brought up a good point; there are no massive labyrinthian dungeons to get your legendary pokemon anymore. My first game was Silver and yes Lugia is the box legendary but getting it is completely optional on top of being at the end of the Whirl Islands, a massive dungeon (by the Gen 2 games' standards) which required you to use 6 of the 7 HMs to get to this massively powerful pokemon (something I never actually did as a kid nor have I bothered doing as an adult) nowadays you have what is effectively a straightline with maybe the odd need to use strength or rock smash or the fucking thing is straight up requried for the story (one of the things I dislike that the gen 3 games introduced was integrating the legendaries into the story) yes you can faint it but the catch rate on the recent legendaries is so high that you can toss a regular pokeball at it and you'll catch it in one go without having to weaken it. Seriously give me my massive dungeons and hard to reach legendaries that have insanely low catch rates that force me to save scum to get them because I fucked up.

I've been doing a mono fire type run of pokemon moon as well and this run has highlighted to me some serious issues with those games, but first I'll givey ou the team with their abilities

As you can see I do have a few things to help me, that being Drought and Speed Boost however I could probably have gotten to the point I'm at without those since other than a small hickup against the ghost totem pokemon (which was caused by RNG bullshit) where it took the champion to finally take out my entire team, an entire team with three handicaps to it; all fire types, no Z-moves and no held items and I practically cruised through the entire game with very little challenge or difficulty and while the pokemon games have never been that difficult I doubt I'd be able to do a monotype run in the older games because they do have that challenge that encourages you making a balanced team.

this will have two reviews and a very early impressions, I actually intended to just "review" trails 1 but I got distracted and ended up completing 2 as well so I'll just "review" the both of them.

With this I'll go a bit into the setting and background for the game(s) they're set in a place called the empire of Erebonia, which has gone through a sort of magitek indsutrial revolution. However this revolution has caused some tension between the nobility and the commoners and this conflict is the center of the second game as well as a cause of conflict between characters in the first  however in the first it takes a backseat for the most part. In Trails of Cold Steel 1 you take control of Rean Schwarzer as he attends a military academy and becomes part of a special class, class VII, which consists of both nobles and commoners. The game takes place over the period of 6 months with the members of class VII attending regular classes at the academy and joining clubs (it feels a lot like a high school battle anime in video game form) however class VII has an additional task on their curriculum, those being field studies where they are split into two groups and sent to two different places in the empire. It's at this point I should probably go through the members of class VII (as well as a few side characters.)

These are the initial members of class VII, the ones who started out together from the beginning, during the course of the game that being Crow Ambrurst (like fie I can't remember how his last name is spelled) who's a lazy second year that gets forced into the class due to his bad grades and Millium Orion who is a perpetually happy girl with a strange puppet thing she controls for battle. Also you have Sara Valestein who is the class' instructor, a drunk who's looking for a "classy" man (ends up falling pretty hard for Laura's dad) and Sharon Kreuger, the Reinford family maid who ends up becoming the class VII maid, easily the best character in the game alongside Fie.

As for the combat it's turn based with a few differences (this section applies to Trails of Cold Steel 2 with a few tweeks) where you have a turn order but on certain turns the character whose turn it is can possibly get a buff, these buffs range from a self heal, to the ability to instantly cast magic (which has a 1 turn delay normally) at no cost to a guaranteed crit. This system makes it pretty tactical as to whether you use certain abilities (as they have delays on them) or just turtle up to prepare for a potential critical, it also means that the speed stat is possibly the most important stat in the game as it allows you to control when and who gets the buffs (somewhat) or just murder the fuck out of the opponent before they can make a move. Positioning is also pretty important as almost every skill has an AoE range so you need to maneuver your party members either to avoid an enemy attack or to gain the benefits of your own buff skills. Additionally you can link two characters together (called a combat link) which allows the linked character to perform follow up attacks and gain additional buffs.

Finally the "materia" system adds even more tactical nous to the game as you (at least initially) need to balance boosting each character's stats or giving them new magic. Each character has a set way of equipping these materia with some being forced into using specific types and will only be able to equip a certain number of the same kind of materia.

As I said in my impressions the music is decent but not all that memorable.

This one will be shorter as the combat system is the same and the characters are the same (also Valimar cockblocks Rean, it's pretty funny.)

This game takes place a month after the events of the first game and is split into 2 acts, a side story and an epilogue (although the side story feels a bit too much like padding) with the first act consisting of Rean travelling around using Valimar's teleportation ability to gather the rest of class VII witht eh second act being Class VII flying around in an airship righting wrongs, freeing provinces and finding materials for a new weapon for Valimar before a final confrontation. The noblity vs commoner conflict front and center in this game as well as there being far more mech fights.

The ending is also one of the best composed I've ever seen with it hammering home the sadness the members of class VII are feeling at having to go their separate ways at the end by the perpetually cheerful Millium and the perpetually stoic Fie both breaking down in tears.

Like I said the combat is pretty much the same in general, they added an overdrive mechanic which lets a combat link to act uninterrupted for 3 turns (4 if you activate Rean's super mode) which can get pretty fucking powerful. The main combat mechanic though is the mech fights, these fights have you choosing one of three parts of the opponent's mech to unbalance them allowing you to make a follow up attack or use a powerful finisher additionally the opponent's stance dictates which part is more likely to unbalance the opponent.

The materia system also has a change with each materia having a rarity (normal, rare and super rare) and each slot being able to be levlled up (lvl 0, lvl 1, lvl 2) the higher each slot's level the rarer (and more powerful) the materia you can put in that slot. Other than that the system is pretty much the same.

A shorter review for this one as I wanted to avoid spoilers as much as possible and there isn't really any significant changes from the first game.

Still in chapter 1, but got annoyed when I found out Rean was the main character again as it's set a year and a half after the events of the 2nd game, the UI is changed and the combat system is slightly altered adding a break status which stops the enemy from attacking while suffering from this debuff but for the msot part it's more of the same just with mostly new characters.

In all three parts of this I didn't bother mentioning the minigames, they're alrgely just there as a way to get some rewards and are purely optional although I do like the fishing minigame in 3.

Finally Mist, tried doing something with her and the amazing world of bikini armour mod. Kinda going through a timeline of when she started out to when she kills Alduin. 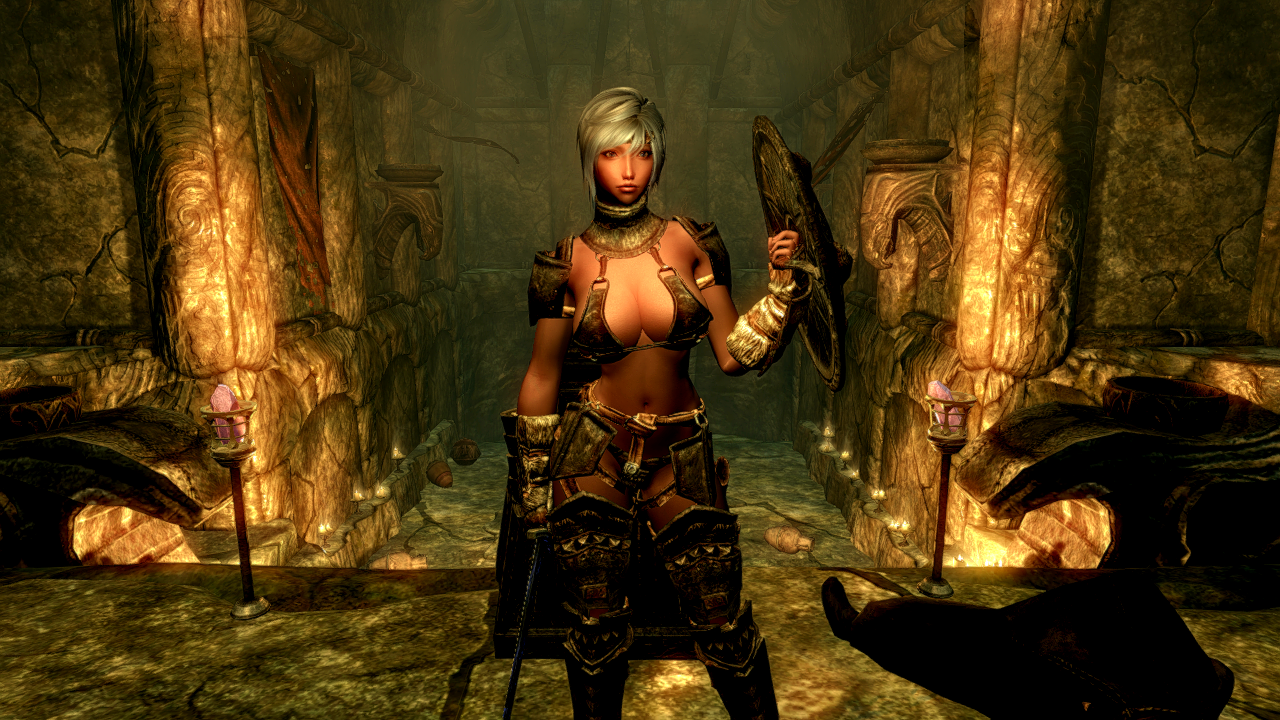 Second job, Steel armour. This time it's to clear bandits out of one of the camps around Whiterun. She's starting to make a name for herself as well as upgrade her gear. 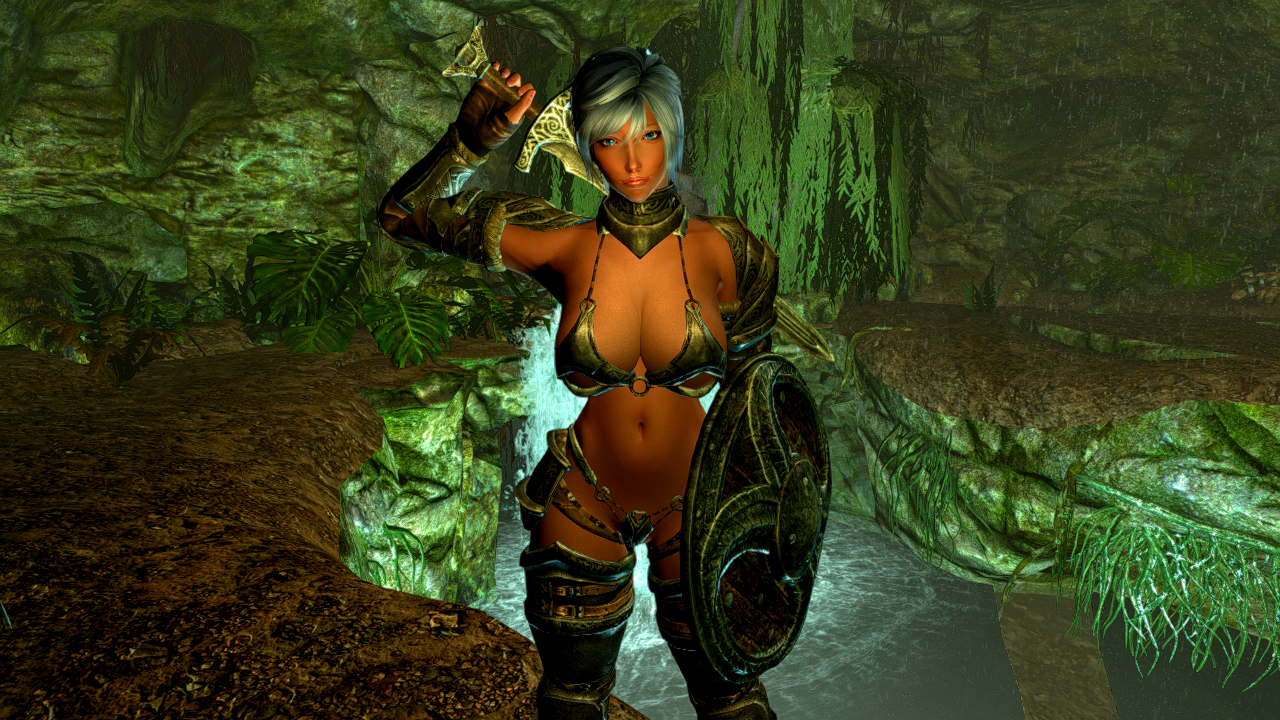 Third job, finding the Golden Claw. Steel Plate armour. She finally gets her most recognisable gear setup of Dragonspear and her Steal Heater shield. Just before she sees Alduin fly out over Helgan and goes to tell the Jarl. 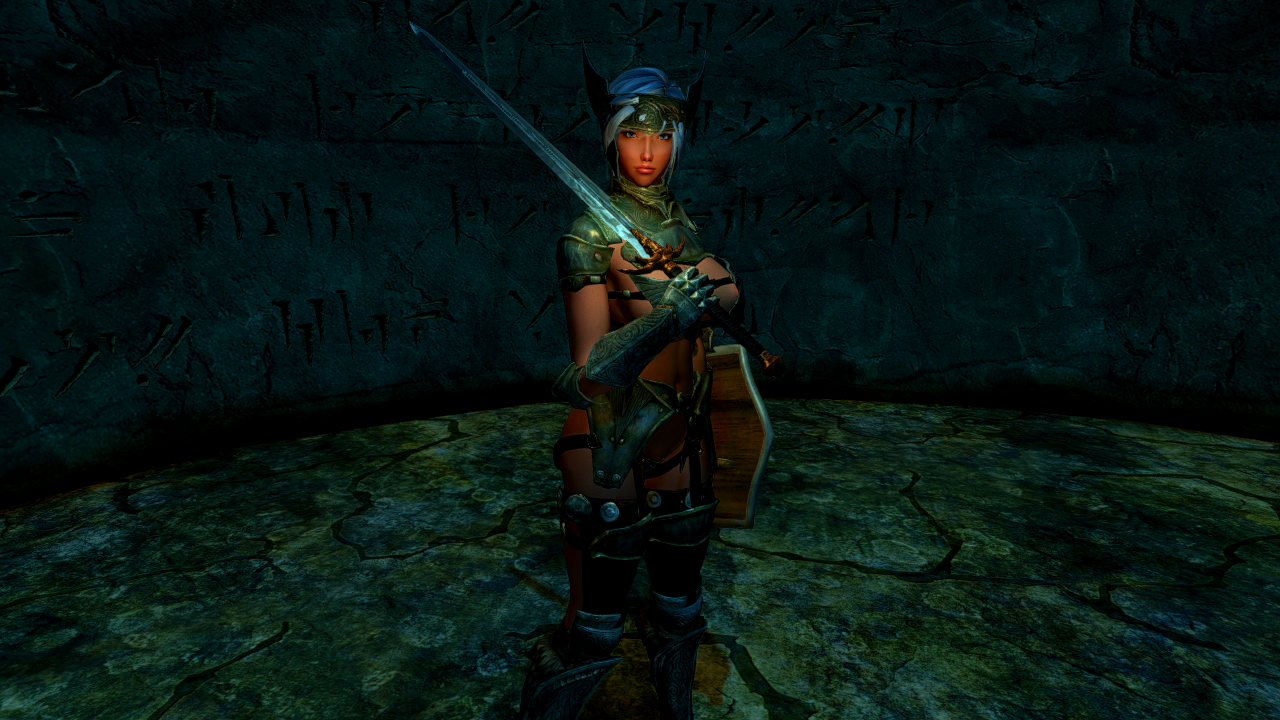 I'll probably have more of these detailing her journey when I can be bothered, I have plans for Ebony and Dragonbone armour so this might just be a short 5 image "series".