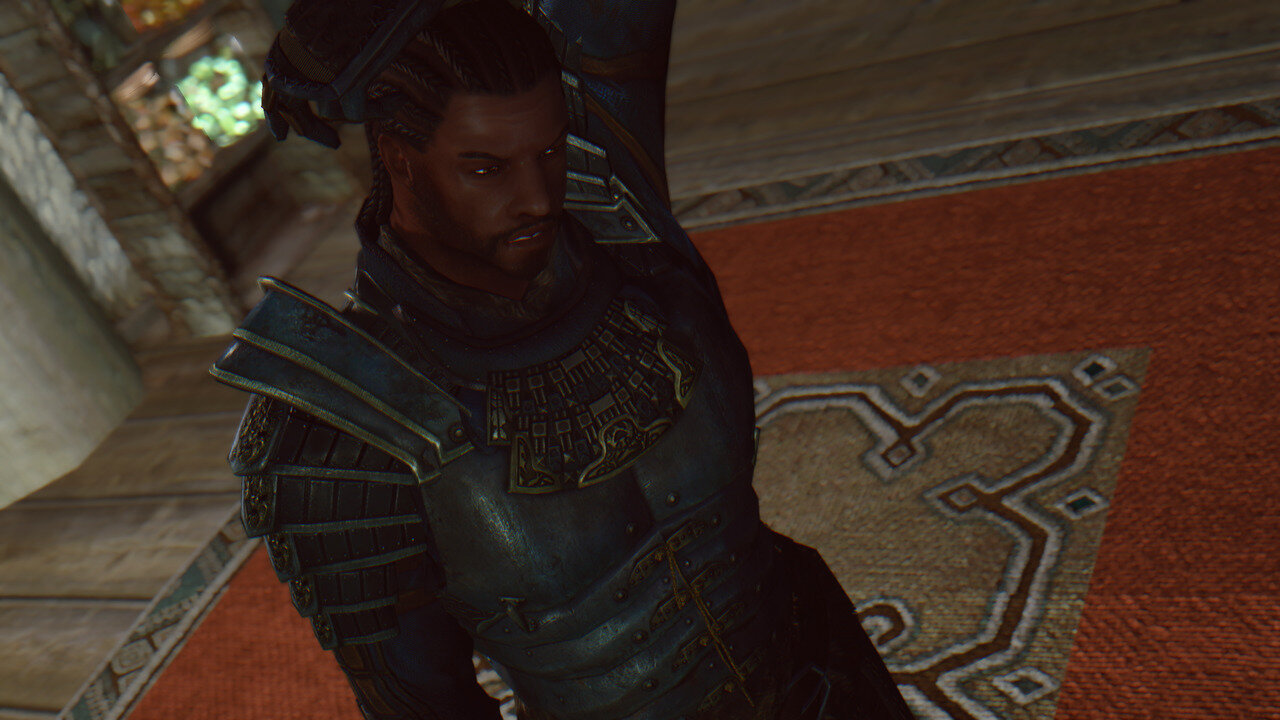 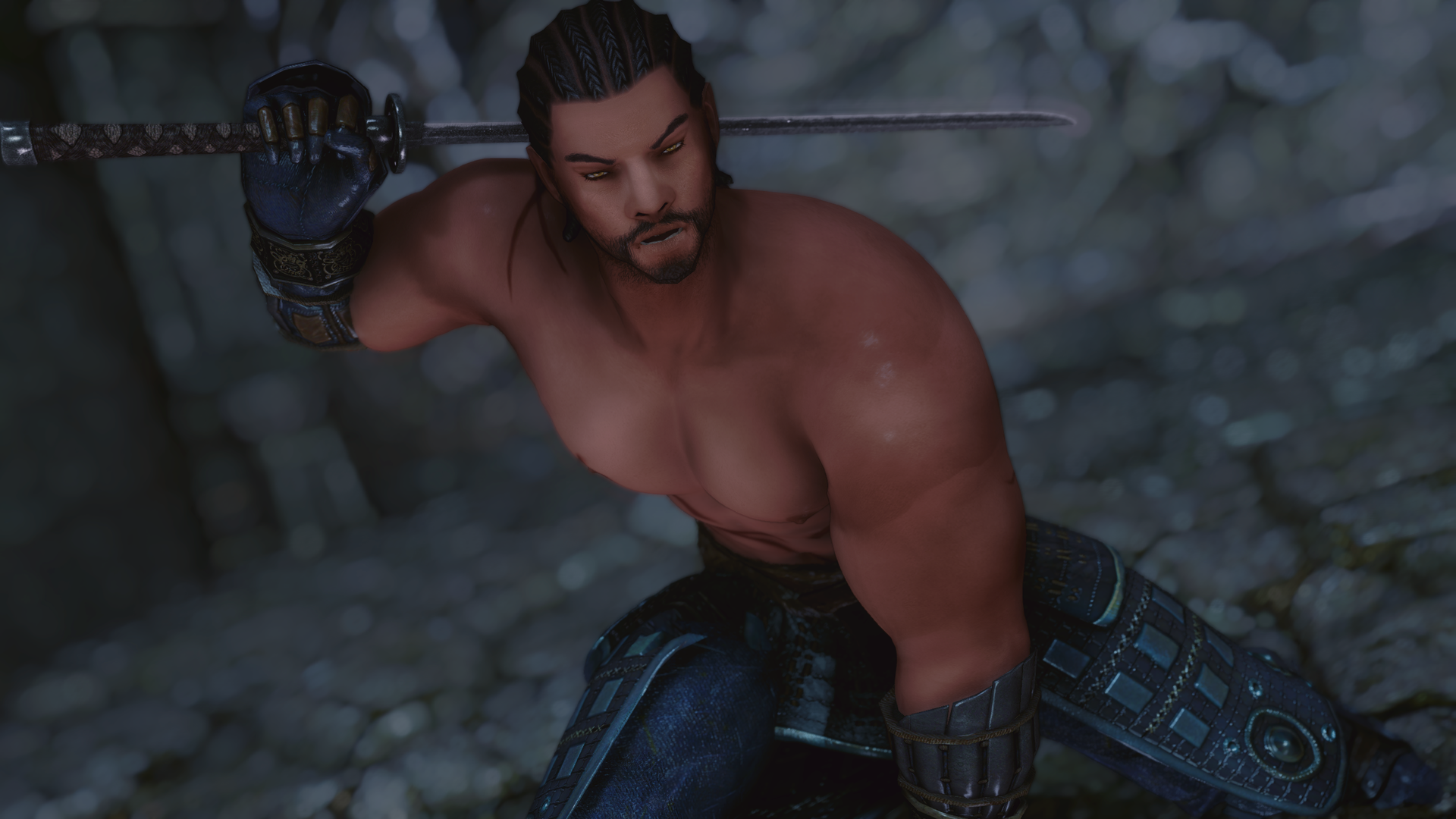 Occupation: Second-in-Command of the Blades, Mercenary

For as long as he could remember, it had always been Alashir and his older brother, Razelian, fending for themselves against the world. The memories he had of his parents were scarce, the most vivid being the day they brought the brothers to their uncle whom the young boys presumed they were going to stay with for the foreseeable future. However, their uncle an illegal drug trafficker and within a year he left them in Gilane in order to more quickly move about the province. Having given up on relying on their other family members, Alashir and Razelian decided to stay in Gilane and build plant their roots there.

Training, hunting, training, eating, training, sleeping… The daily regiment for the brothers was simple, but for the two of them who had so little it was rewarding. Being able to gauge how far they came from the previous day was something the young Redguards couldn’t wait for and sometimes lost sleep over. After a few years of this, the brothers’ achievements were recognized by Gilane’s acting King, King Alushik I, and he enrolled the boys into the city’s elite youth army, the Ebon Corps. There, their life was more of the same, but with structure. They tested their might and mettle not only against their peers, but against those who trained them as well. Expectantly, Razelian shot up the ranks and within six months held the second highest rank one could get within the Ebon Corps. Alashir’s rise wasn’t as sudden, but the young brother found glory within the army as well. Although rank separated them, the brothers were set that nothing would ever tear them apart… and then enter Delusia.

Delusia was a girl who the brothers had known ever since arriving in Gilane. She endeared herself to them quickly and soon found herself as a third wheel in their activities. That had changed when the brothers entered the Ebon Corps, but not for long as they pair would soon find out. Being slightly better than Alashir but not as great as Razelian, seven months after the pair had joined the Ebon Corps, Delusia made her debut and things went back to usual for the trio. However, Alashir could see a rift form between himself and the other two as within only two months Delusia outranked him which saw her and his brother hang out more often.

Although perturbed by this, Alashir didn’t mind. He knew that although he longed for Delusia’s affections and had done so ever since he laid eyes upon her, he knew that her eyes were always on his brother and for everything that Razelian had done for him, Alashir wasn’t going to ruin his brother’s shot at true happiness. When he found out that the two of them had begun dueling each other every Morndas to see how strong they had become during the past week, he had jokingly called it the pair’s "lovey dovey" time, but after seeing their resolve during the duel and how relaxed they were afterwards, Alashir knew it was a matter of time before his “joke” would turn into reality. Deciding to focus on himself, Alashir grew more and more distant from his brother and childhood friend and after hitting a wall in regards to his standing within the Ebon Corps, he turned to another for help.

One of the Ebon Corps’s most unusual recruits was its fifth highest ranking member, Ra’jenji-Do, a rather crafty and ingenious Khajiit who made a name for himself within the army by utilizing his immense tactical wit and disregarding conventional combat styles to use an informal fighting style he dubbed “Kyaan-Do,” an unorthodox style comprised both reading and overpowering your opponent while seeming like you’re doing neither. When he hit a wall, Alashir went to Ra’jenji-Do because he knew that Ra’jenji-Do was the only one in the whole army that could beat into him the one thing that he didn’t have, spontaneity. It wasn’t easy by any stretch, but within a few months Alashir could saw results as he finally cracked the top one hundred ranked members of the army.

Throughout his teenage years, Alashir slowly but steadily rose through the ranks and felt that it was but a matter of time that he broke through to the army’s top ten officials, but then Gilane or rather the Ebon Corps received a writ of challenge from a man calling himself the Ebony Warrior. Immediately upon hearing this, eight higher ranked warriors answered the call including both Razelian and Delusia.

Alashir had wanted to join in as well, but both Razelian and Delusia forbade him from doing so. After seeing the "Ebony Warrior" go against his first six challengers with the result ending with their defeat, Delusia tried her hardest and faced off with the “Ebony Warrior” with everything she had, but not only was she unable to land a hit on the Ebony clad Nord, she wasn't even able to protect herself from any of his blows... And this was after he’d already faced off against (and slain) SIX of her brethren. Just as the Nord was about to seal her fate, Razelian stepped in to protect her much to Delusia’s disdain. After saying that if Razelian died, they both died, the Ebony Warrior fought Razelian in a duel that seemed like it went on for hours. Alashir couldn’t believe his eyes, and realized that doing what he’d been doing wasn’t enough. Delusia, the “Ebony Warrior”, his brother… He thought that he was one step from being able to fight them, but he realized on that day after seeing his brother fight and defeat the Ebony Warrior that he could no longer stand in their path to greatness.

Utilizing the celebration of his brother’s victory as a guise, Alashir snuck off and became a deserter. Heading northeast, he didn’t stop going until he found himself surrounded by a group of bandits north of the Rift. Tired and weary, Alashir had half a mind to simply allow them to capture him just so that he could rest for a bit, but after seeing a pair of teens, one a male with short blue hair and the other a female with long dark hair and golden eyes, as the bandits’ captives, Alashir made quick work of the group of bandits before passing out. When he came to, the girl threw herself on him while bawling while the boy explained what had happened. Apparently, the two of them, Andeyncois and Jylisen, were students at the College of Winterhold who were on an assignment. They were supposed to collect an ancient magical artifact from somewhere in the Rift, but they were supposed to be able to find it only my sensing the artifact’s Magicka… which is why they got lost and subsequently captured by bandits.

Alashir, having nothing better to do at the moment, asked the pair if they would like him to escort them, and the duo, having given up on their assignment and simply wanting to return to the College, eagerly agreed. After arriving back at the College, Alashir, upon promising Jylisen that she would keep in contact, left and had decided that he would simply train for a bit throughout the land of Skyrim before ultimately returning to Gilane. However his plans were forcibly changed after meeting with the Dragonborn sometime later…

Sorerica, one of the most irritable people Alashir had ever met, was also one of the strongest people he’d ever seen. She was so strong in fact that he believed that the anal Nord could possibly even take on his brother in a one on one fight. After seeing Sorerica take on a group of four giants using only her hands, he had no intention of engaging the Nord, but had no choice when she waltzed up to him and took an affront to him sneakily watching her dispatch the giants. Without allowing him to explain himself, Sorerica attacked him. However to both of their surprise, Alashir was able to momentarily subdue her on her belly thanks to his Ebon Corps training. Feeling that this was a fatal mistake, he immediately released her and braced for another attack, but instead was greeted with an extended hand and a hearty smile. Without another word, Alashir knew that they would be close companions and was proven right as he traveled within her inner circle consisting of himself, Sorerica’s closest Housecarl Lydia, the gigantic Orc brute Molac Bulagurz, and a rather peculiar adventurer that goes by “Dovakini-chan.”

Alashir would become an invaluable asset to Sorerica as he became the leader of the reformed Blades under the Dragonborn’s banner (who decided to spare Paarthurnax and slay Esbern for his defiance and persistence that she kill the meditative dragon), he accompanied Sorerica, Dovakini, and Lydia as they vanquished Alduin, and he also became someone with whom Sorerica felt comfortable confiding in. After the Civil War’s end, Sorerica vanished and although Alashir led the charge in finding the Dragonborn, he soon decided that Sorerica needed the space and ultimately temporarily disbanded the Blades which allowed everyone, including himself, to get a well-deserved break from all the turmoil that the province provided… Or so he thought. That would all change when Alashir happened upon Bleak Falls Burrow in his travels and witnessed a young hapless adventurer about to be ravished by a slightly out of his mind Bandit Leader…