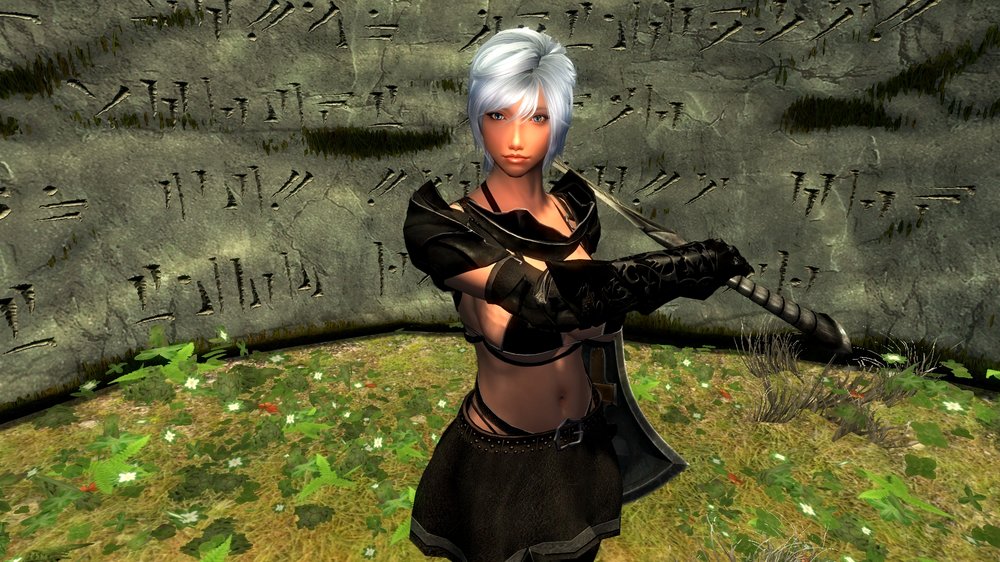 So for those of you who've followed my stuff for a while you might know I had a character called Mist, she was made using the Valkyrie race mod (I like Norse mythology) and was the 4th character I ever uploaded screenshots of (Cris was the first and two now retired vanilla characters where the second and third) however I sort of stopped uploading images of her primarily because I wanted to get Storm and Cris back into the game after my many, many reinstalls of Skyrim however she's back and better than ever since I changed her body type from CBBE to Sevenbase (which has now become my preferred body type for my characters) as well as changing her skin textures from the default Valkyrie ones to the fair skin complexion ones (the default ones, while nice, only work with the CBBE body) as well as some tweeks to her face (here's an old shot of her for comparison) to the point where I now think she's my best looking character.

Also some minor changes to her character (if I ever do anything with her storywise) she used to only wear plate armour and fight with sword and board, I've removed her preference for plate armour as you can see in the shots below she has now started wearing bikini armour (speaking of which, I hope someone takes up nisetanaka's mantle and creates some elven and daedric bikini armour) although she still likes to use sword and board.

Since I took 16 images of her I've decided to split them and would like to ask you lot to vote on what sets she appears in next. I only took one shot each of the ebony and blades sets since the ebony shield did not want to play nicely with any poses and I'm not much of a fan of the blades set. Also if you want to see her in any of the other sets (I left out wolf, steel and iron) they'll be in the poll too, it also means you'll see more shots of her naked. I'll upload all the ones I've already taken at some point, the poll's just there to see what ones people want to see her in the most.

And finally since I recreated her I have one last dwarven cyborg bad end shot, it's in the second spoiler and as ever if you want to see more bad end shots please give me suggestions and I'll try my best to make them, just no rape or bestiality.