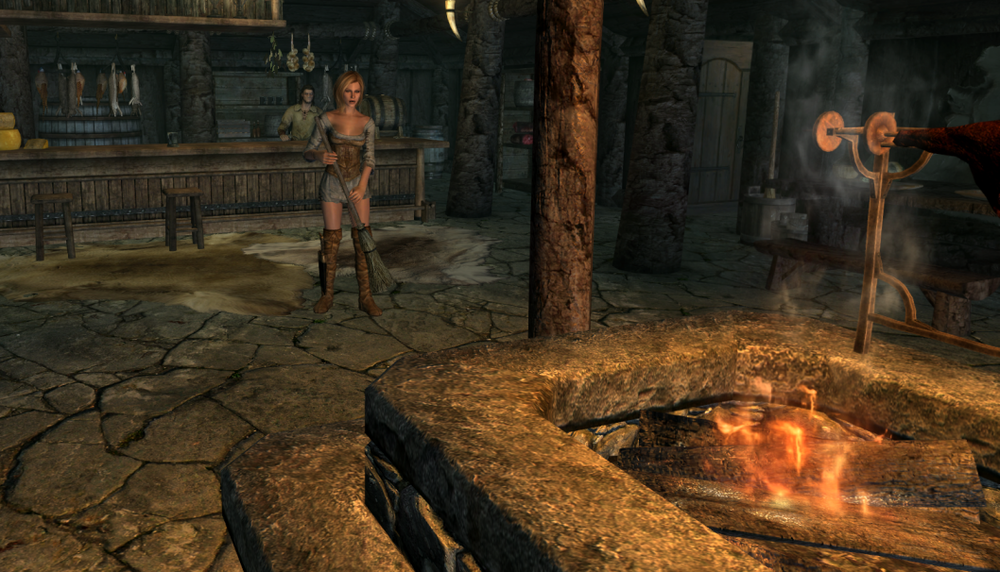 After a morning snuggle with Alvor and Sigrid, a playful breakfast and naughty wake-up for Hadvar (if I get enough people to comment I'll get some pictures of that /4thwall) I headed over to the inn to inquire about the horse outside. Stepping around the passed out drunk and through the door I hear a woman berating a rather tolerant looking bartender. The voice sounds familiar and the shock hits as I round the cooking pots hanging over the fire.

I cannot resist calling out to the woman I haven't seen in ages. I'm not really sure if she is really my mother's blood sister or just sister in arms but they and my father, and grandparents and so on were Blades, back when there were Blades. Since then, we all scattered and took on new identites, hence my layered jobs and significant traveling work. We don't think the thalmor even know about me or would look for me, but this keeps me out of their eyes and might let me find information about their operations through my contacts with the Army that I could pass on.

( nice frontal shot, since I haven't had too many of those. Armor is Saraphine's UNP )

Delphine drops her broom in shock and rushes over to me. We exchange greetings before heading into her room for a bit more privacy. I fill her in on what I've been up to, she tells me about what led her to Riverwood and the purchase of the inn. Eventually we get to the story of her research into dragon mounds and I suddenly realize I never told her why I'm even here. "Aunty Dee... I saw a dragon. It nearly killed me when it burned down Helgen." Needless to say, thinking dragons are back, and hearing someone tell you she saw one, is a little different. "Things just got a lot more urgent then," she tells me, "I think I found a lead on a map of all the dragon mounds, and we could use that to check them all... figure out what is going on." Nodding I ask "So, where is it? Do you want me to go find it for you? I'm guessing it isn't just in a shop someplace." Chuckling, she says "No, it turns out that its only just across the river, in the Barrow on the mountainside. Ironically, there are some thieves that just went up that way after breaking into Lucan's shop the other day. Whether they just intend to hide up there or what they stole is connected to the barrow, I don't know. I hope they aren't after the same Stone we are." I shake my head. "I don't think bandits will pose that much of a problem, unless they are army deserters. Bandits usually can't fight worth crap. I'll be a little more worried about the draugr. Not much, but a little."

( Fourth wall breaking time, because why describe a dungeon crawl we've all done plenty of times. Our heroine has little trouble retrieving the stone and returning Lucan's Golden claw, and if I get more comments I'll work on a night of rewards and entertainment with Lucan and Camilla. )

Delphine and I spend a little time catching up and making a copy of the stone before she sends niece, with stone and reports of the dragon, to Whiterun, hoping the mage there can provide more help with the translations. What guards can be spared would be useful in Riverwood as well, as population control. There were a lot more archers at Helgen and we saw how effective that was (not knowing, at the time, that there are dragons and then there is The Dragon).

Back a page - Next : Whiterun