A soft wind drifts through the trees, making the leaves rustle slightly and reflect a rather peaceful ambient. Several leaves parted them from the branches and gracefully danced in the wind downwards to the ground, but one of them was catched by a gauntlet made out of black leather. The clawed fingertips stroked the veined surface of the leaf, tearing it up and causing the water to drip out of it like blood drips out of a fresh and deep wound. In a mixture of boredom and frustration the gloves was formed into a fist, crumpling the leaf and then throwing it to the ground where the other leaves already had been trampled into the dirt.

As the fur of a plated gauntlet touched her skin and was placed on her shoulder in order to comfort her, Marina looked at a broadly smiling Toki who immediately kissed her cheek as he got her attention. She couldn't help herself but smiling aswell and stare into his light blue eyes, dwelling in the bliss they expressed. Toki started to stroke her hair slightly and pet her ears, causing her to purr and smile even more warmly.

The two mates had a rather exciting week so far; after settling a vendetta between Marina and Meridia by slaying her priests and defiling her bloodied altar as they two shared deep affection on the statue, culminating in a blessing wave of purified white water, they headed for Skingrad so she could deal with a rather paranoid thrall of her who started to cause too much problems. On the same day they headed for the Imperial City to restock supplies and prepare for a journey to Leyawiin in order to clear a few bandit camps and collect some bounty as welcomed addition to the fun of killing and bloodshed.

When they reached the Blackwood though things soon changed. None of them was familiar with the locations, so they quickly got lost and could do barely anything but following the cobbled pathes leading them. On top of that they weren't able to find a single bandit, not even a highwayman trying to ambush innocent travellers. This caused both boredom and frustration in Marina, after all they came to this part of Tamriel to swing the battleaxe and let bolts pierce through dying corpses, but all they did was straying through swamps and forests.

Again Toki kissed his vampiric mate, this time on her sweet lips though, and Marina purred happily, embracing her companion and stroking his beard.

"Do you remember when I had my last encounter with any vampire hunters?".

Toki thought about this for a while, not only because it clearly had been quite the time without any stronger enemies than bandit scum, but this question also could be meant as a trap from Marina; after all her phases started to work together once something bothered her, and this clearly was a dangerous combination.

"I know what you need", noded Toki and stopped. Not realizing he wasn't next to her anymore Marina kept walking for a few meters, but as she finally realized during her thinking that his arm wasn't on her shoulder anymore, she turned back and stared at him, slightly puzzled. Broadly smiling he placed his battleaxe in front of him and patted it's top a few times. Marina frowned, wondering which of the few possible meanings for his actions Toki might have in his mind.

"You need to show me what 'affection' means again".

The vampiress giggled, well knowing that soon they will get rid of their boredom for a while. With a slow and cheerish 'meow' Marina walked past the waiting Toki and started to untie the black leather of her chest's armor. As she reached a low wall, she turned around, sat down and leaned her crossbow against it. Toki stared into her amber eyes, but his view immediately dropped on her pitchblack markings and eyed her nude chest.

As Marina spread her legs she revealed her demonic aura, ethereal wings that seemed to consume both light and color of the surroundings. Toki looked at her skirt which she immediately lifted for him to see she was ready for him. 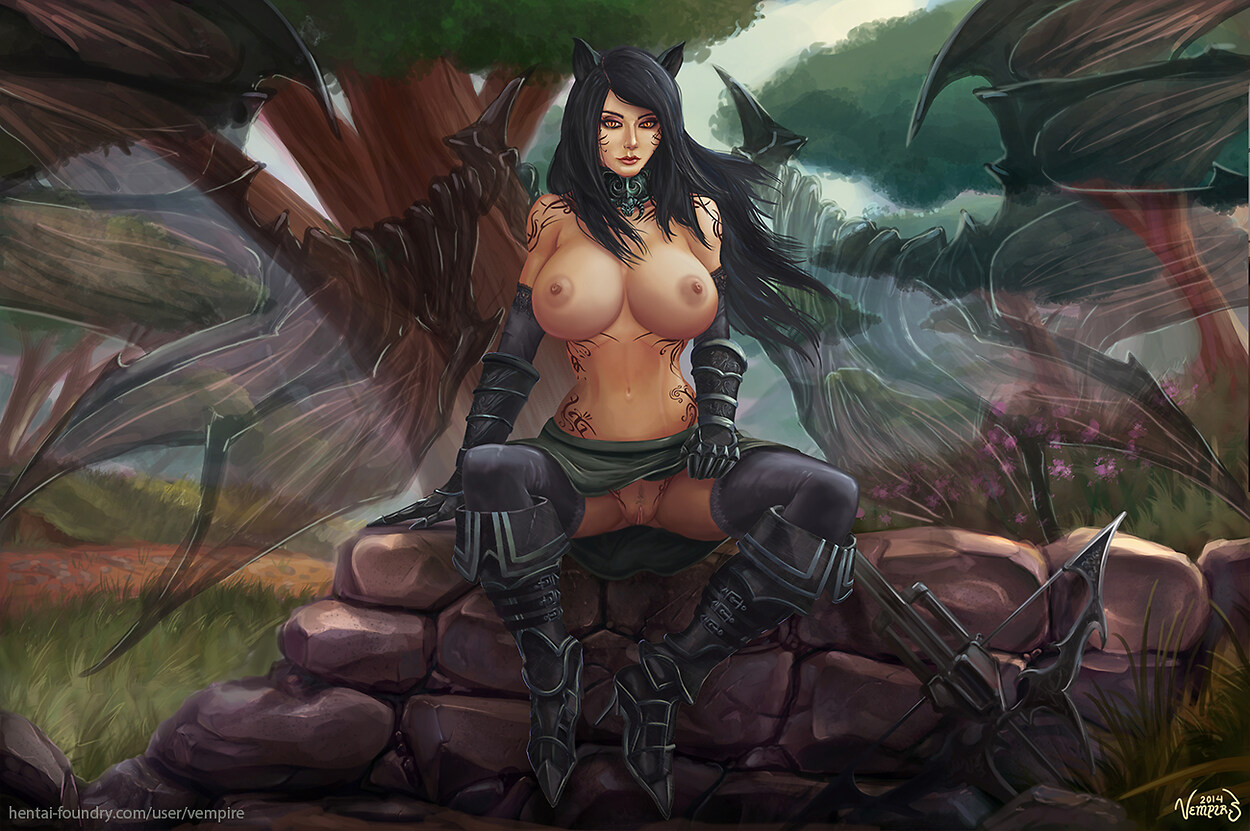