We are ready to leave Dawnstar but we stop to admire the place the ferryman choose for his fire. Look at Rener glaring at Shina for wearing the same outfit. ? Don't say anything but I think the outfit works better with Shina's green skin. I'm not getting excited yet but no sign of any ice or snow on the LOD front. Our first fight of the day (I'm not including the 3 horkers just outside Dawnstar). Bandits fighting Man Eaters until the gels put an end to the violence. A bit further on and a War Zones Imps vs Stormies battle. Once we got to that spot things got confusing. The WZ fight, which doesn't involve us, was over or almost over as we arrived with the Stormies coming out as the winners. Then some rieklings appeared and set to with the Stormies. For some reason the gels got involved in the fighting and at first I thought it was just wolves or a sabrecat that had got dragged in. Before I can figure out what is going on Stormies and rieklings are all dead and the gels are running off on a killing spree. ☹️ There were some strangely clad Stormies in there. ? The gels are off all over the place so I continue up the hill to the Winterhold Imp camp. I'm on my own and I know that an HSO villain will show up so I hang back to see which way the wind blows. Discretion being the better part of valour and all that. Well it turned out the wind was blowing in my direction as the Imps made short work of the HSO villain and then turned on me. ?

I ended up reloading and moving off before they turned on me.

Still no sign of the team so I carry on to Frostflow where one follower turns up as I arrive. 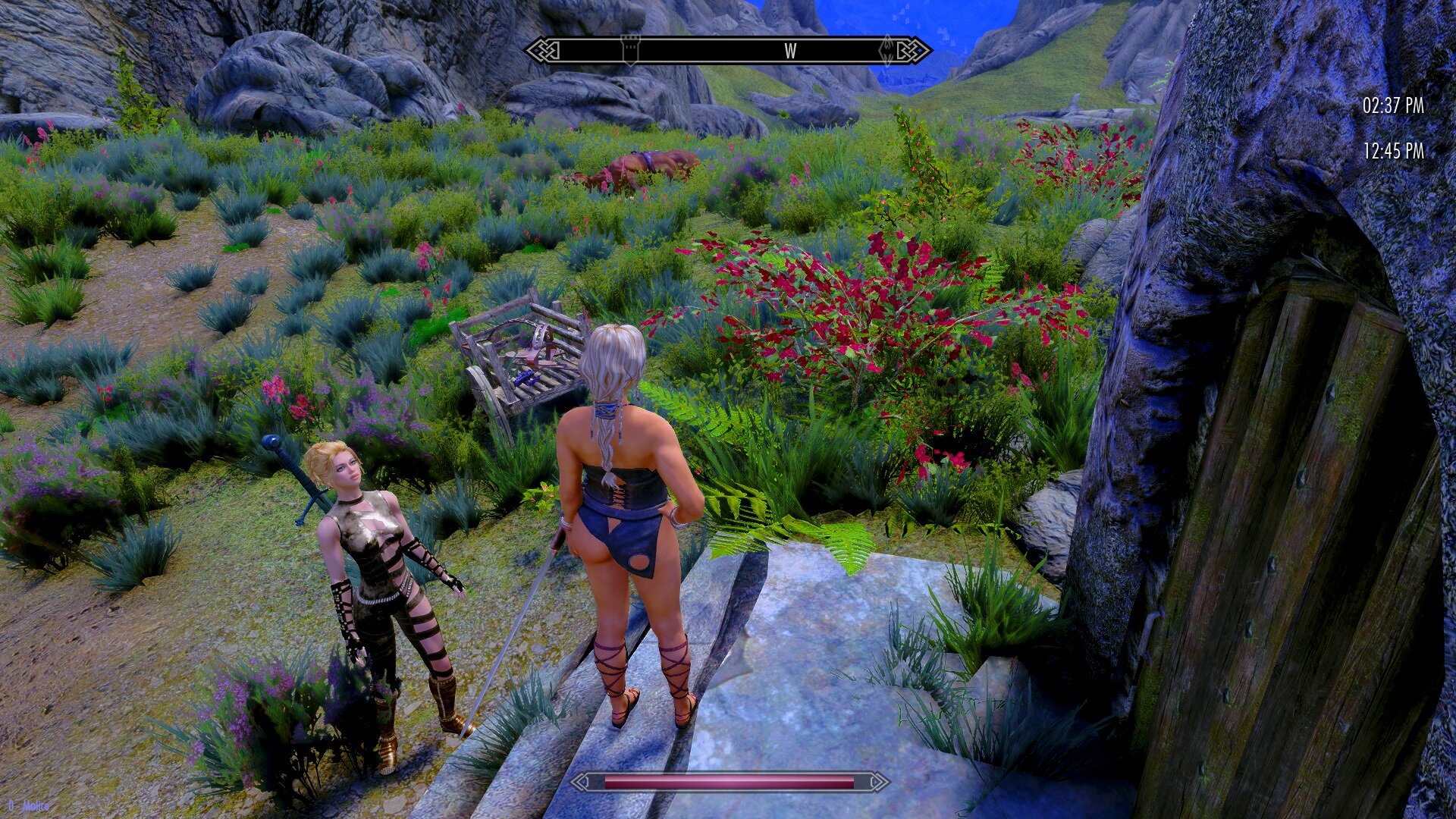 "I don't give a flying fuck how you self-identify, do you want to buy skooma or not?" She threatened to report me to the guards. Fuckin' snowflake.

Here's a fun challenge. Grab the contents of the knapsack and get out of this confined space with a chaurus and umpteen followers trying to stop you. ? I did it in just under three weeks. Not bad.

Ayup. Santa's Grotto was never like this when I were a lad. "Blood and sand. Will yer give me a minute?" Finally. Does anyone else have this? It is on the ramp up after killing the boss chaurus. It's been in my game for as long as I can remember (or not been in my game). Dropped a major clanger not parking the team for this one. ? Only eight of them between me and the trapdoor. ? Exit Frostflow and turn left for Alfthand and Hobb's Fall. But first some wolves. Then a sabrecat and another wolf before I can move. In Alfthand Tower and attacked by four Sons of Atmoran. I can't remember if they are normally hostile or not. Another close call on leaving, though the drop wasn't as big as it looked in the dark. Once we down from there we can see a fight taking place. Turns out to be draugr and skellies taking a large wolf pack. I'll take that if you don't mind.

And then the team all hare off again. Oh, how we laughed. I may as well make myself useful. The fight involved draugr, skellies, Man Eaters and vampires but eventually my team return and we headed for Hobb's Fall. We were attacked by HSO's Sanguine's Puppy then it was noraml service is resumed. 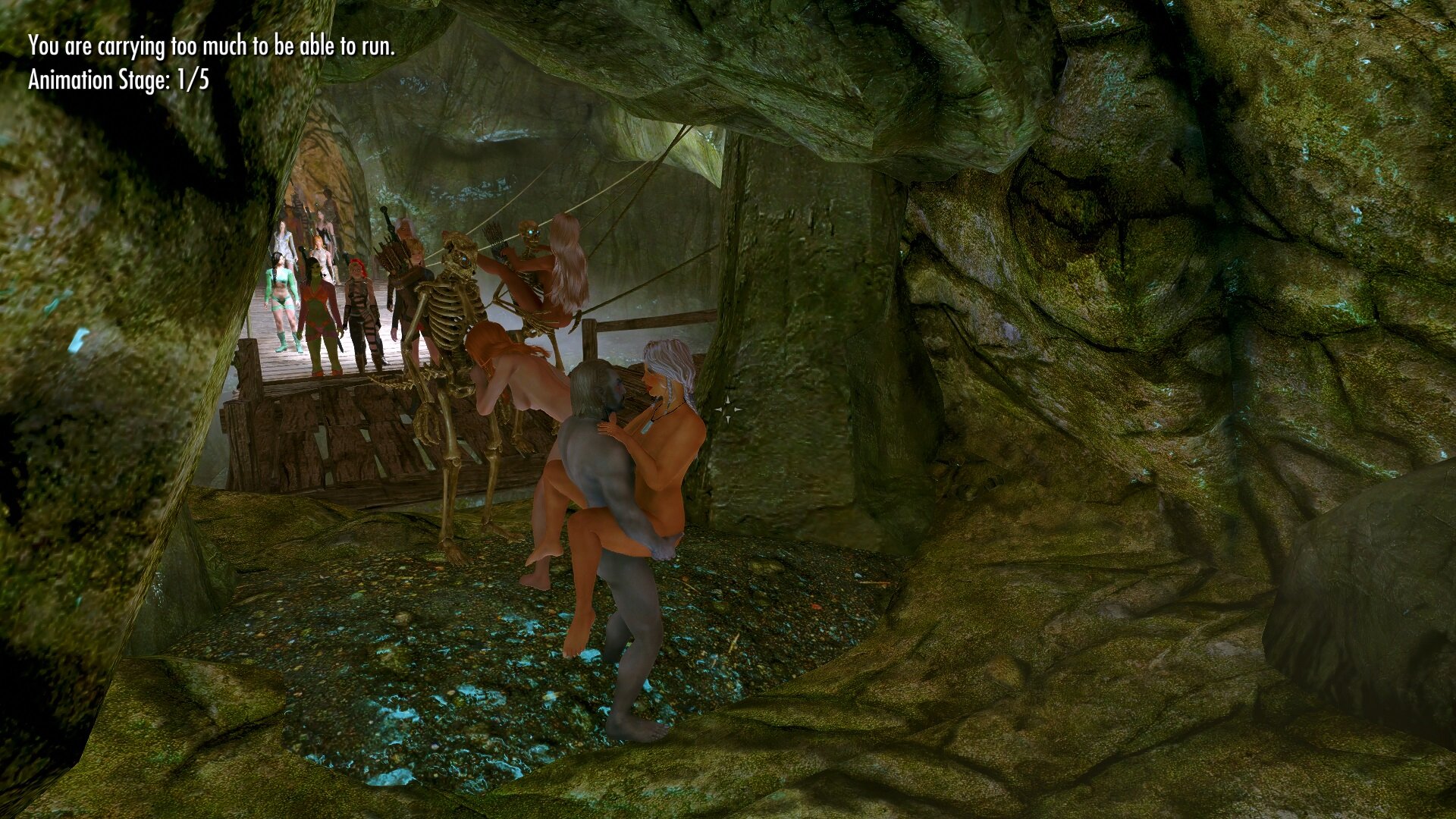 None of these sex shots are staged they just happen as and when certain mods kick-in.

I'm hoping we get to Winterhold before Xmas. ?

[Note to self: This time do not, repeat do not, forget to pick up Wylandriah's doo-dah]