"How much to fuck you in the Temple of Dibella? My Master wants a third."

"He's your master? I charge extra for Orcs. They're... well, I'm sure you know." The prostitute looks at Maer with pity in her eyes.

They've arrived in Markath, and Maer's Master has decided he wants to enjoy its famous pleasures. He's left it for Maer to organize. Returning to the Temple of Dibella brings back memories. It was here the change happened. When she last arrived at the Temple, Maer was a free woman, an adventuress looking to make her fortune. When she left, she was ready to be mastered, to be trained... to submit.

It seems a long time ago. Maer watches the prostitute writhe and twist, screaming from another orgasm. She wonders if it's making the other woman change he opinions of Orcs, like Maer did herself. Maer licks and swallows her Master's semen from the whore's vagina. No one told her to do it, but it's what her Master would want her to do. It's what she wants to do. She's cognizant that the flavour and texture has changed from being inside the other woman's body. Soon enough Maer climaxes on the cold stone floor, with the whore's wet labia splayed across her mouth, nose, and chin. Surely Dibella must be pleased. "I have some business to take care of."

Maer knows what that means.

"You will do some advertising."

She doesn't know what that means, but she finds out soon enough. Her Master suspends her from up high, for the whole city to see.

It's a long way down. When he comes back and takes her down, they go to the palace. Maer gets down on her knees and cleans his boots with her tongue. He doesn't have to do or say anything. Maer knows what's expected and is eager to please.

What that a grunt of approval? She hopes so. He takes her to Calcelmo, the court wizard (and his assistant).

"She looks familiar," he says. "Ah yes. I remember her. You bought some spell tomes from me, I think? And now you've become a soul stone incubator. Seems a bit of a waste... but ah well, we need soul stones, don't we?"

A soul stone incubator? What does that mean?

"Seems like she's progressing nicely, I have to say." The court wizard turns to his assistant "notice how the belly has grown, and the breasts have swollen...much like a regular pregnancy. The difference is it happens much faster... I'd say she's five or six days in, isn't that right?"

"Should only be a few more days left." "You say you used a potion to prime the uterus, and giant semen to trigger the transformation into a soul gem womb? How did you apply the semen?"

"A giant fucked her."

She can hear the surprise in Calcelmo's voice when he says "she took a giant's penis inside her? And she can still walk? Unless the giant was extraordinarily careful and gentle I wouldn't have thought it possible...."

"I think there was something in the potion... I don't know. Must have been it, it fucked her three or four times. Didn't look gentle to me" (it wasn't).

"Normally it's recommended against as it's dangerous to the host. But it seems everything has worked out for the best... and you won't run into any issues with uneven or insufficient application. Hmmm...."

Maer remembers how the giant's semen leaked from her. There was a lot of it. First it gushed, but the slow trickle continued for hours afterwards. How did it taste, she wonders. She almost regrets not having licked a bit off her fingers now... disgusting, yes, but she does a lot of disgusting things now. "I need to do a touch inspection. Can you lubricate her? I see you have an oscillating device attached to her. Very handy."

Calcelmo is addressing Maer's master, who obligingly activates the vibe.

Maer's thoughts drift from shock at her current predicament to yearning for cock. She hopes someone will fuck her soon. Slowly, carefully, Calcelmo inserts his entire forearm up Maer's vagina. It hurts and stimulates her in equal measures. She moans and tries to wriggle to help her climax, but the wizard isn't cooperating.

"Everything seems to be in order. Several gems have formed and should be expelled in the next few days." He pauses for a moment, twisting his forearm gently, causing Maer to half moan, half scream. "And yes, there must have been something in the potion. There's no way a giant's member could've fit inside her without causing permanent damage."

He plays around a bit, before withdrawing. Maer emits a brief disappointed whine (then quickly looks to her Master to see if he's upset, but he doesn't seem to notice).

"She is very tight. Surprising given the amount of usage she's seen," says the wizard. "Do you mind....?" Maer's Master does not mind. Thankfully he lets Maer fuck the wizard. She does so with a desperate urgency, chasing the orgasm and trying forget the news that she's somehow been turned into a "soul gem incubator".

"Let's see if the advertising paid off."

After the visit to Calcelmo Maer's Master sends her to earn some coin as a whore. When Maer's Master allows her a brief break from whoring, he amuses himself by whipping her through the streets of Markath. Afterwards, Maer attends a private party. It's nice to fuck two guys at the same time. At this point, Maer gains most of her self-worth from making men ejaculate. Two men offers twice the sense of accomplishment. She's a lucky girl, she reflects. She smiles as sweetly as she can, given her sore jaws. Her Master noticed how hard she's been trying. 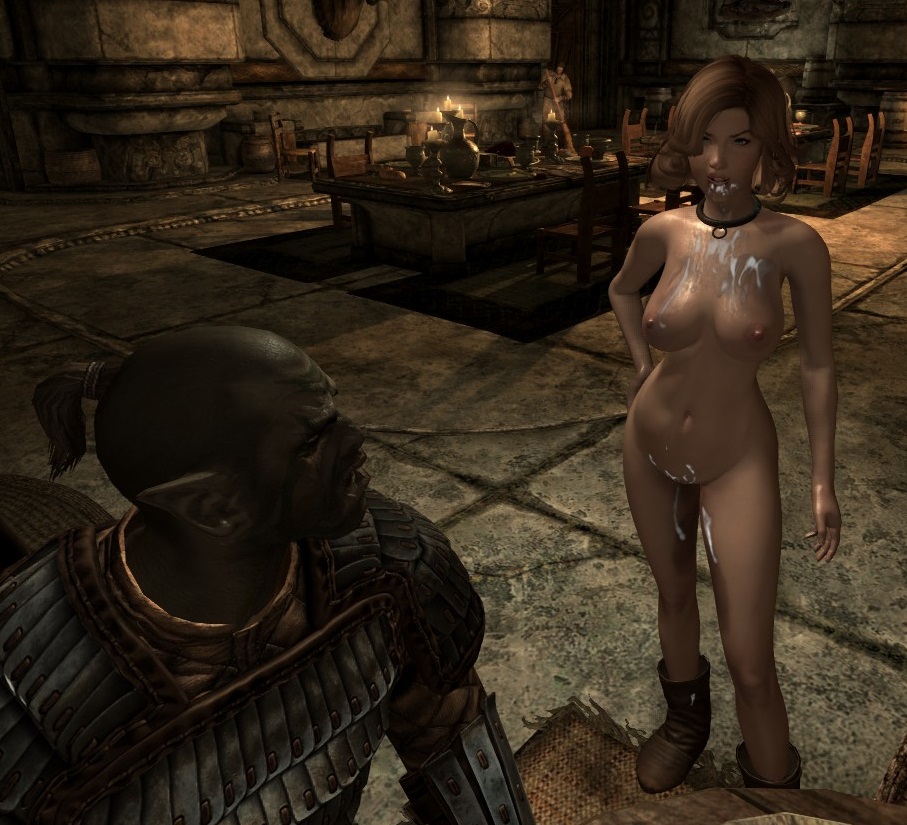 "I'm pleased with my investment. You bring in decent money from whoring. The soul gems will bring in more. You don't talk. And you love Orc cock."

He gives her an approving look, as he stands up.

Maer's heart is beating at double speed. She pleases him! She's exhausted from the work of the day, but it was worth it. 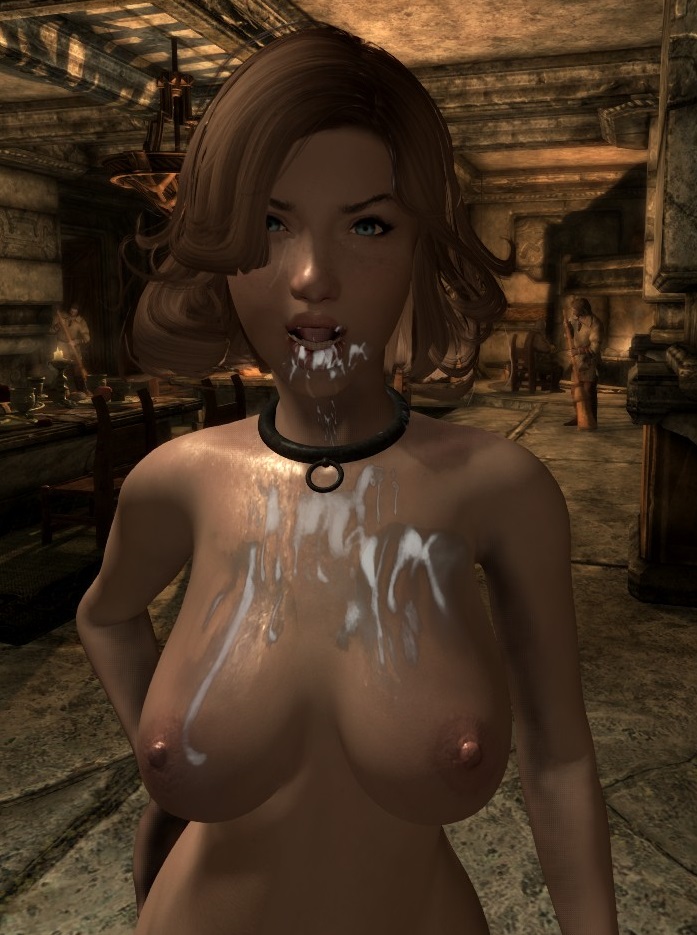 As the sun sets, they head back towards the stronghold. They stop briefly for Maer to service some Imperial soldiers. Her Master offers her up, free of charge, to "support the war effort." Does her Master have sympathies in the Civil War? Maer wonders as she's gagging on the soldier's cock, then refocuses on the task at hand (or rather, the cock in mouth). At last they return home.

The stronghold, where Maer is a plaything, where she's being bred to produce soul gems, where her tits are milked like some cow, and where she sleeps in a dank cave reeking of stale urine and who knows what else... and it's her home. She's relieved to be back.