I've been getting a pretty decent pace out of my work on this project lately. I've gotten nearly everything I wanted to do done, and even expedited the process on the new HG hair set I found last week and built usable versions of everything that looked promising from it in a rush over the weekend, a minuscule fraction of the literally months it took me to do previous hair sets. And I got some pretty entertaining results out of it. 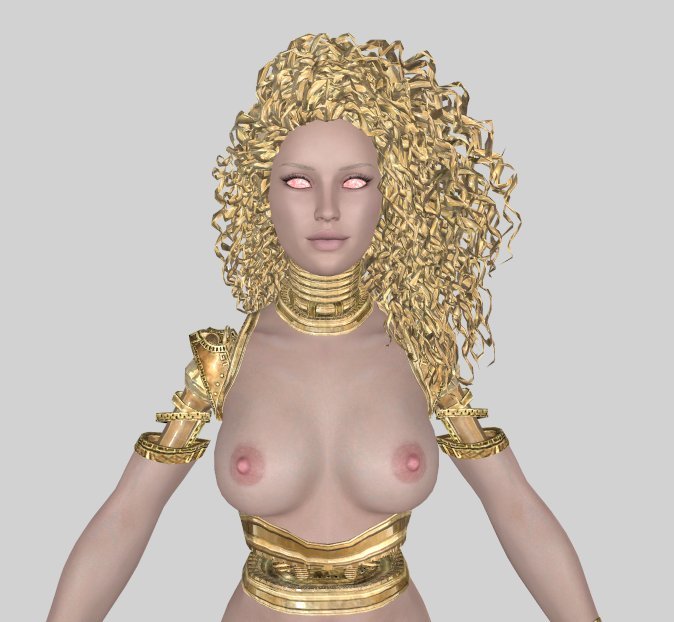 The major things I had left to do were loading all the hairs into the core mod, and some various bits of fixes and cleanup. I was planning on finally getting this out sometime around Halloween.

It occurred to me as I was getting ready to start my work for the day that I hadn't checked on Charmers of the Reach in a while to see how their planned updates were progressing. So I made my way over there... And found that DAZ had pulled its permissions to use its assets and forced Charmers to remove their public distribution.

Obviously, this is A Problem. It's terrible for COR Team to have the project that they've been putting so much effort into banjaxed after-the-fact like this, mainly, but it's also a very direct problem here because being able to create truly high-quality face masks from the Charmers head mesh kind of became the center of gravity for this project as development went on over these past several months. With Charmers gone like this, I can't continue to use the parts I developed from its assets.

My available Plan B's... Kinda suck. The easiest option is to just pull the Charmer content in its entirety and leave the existing face masks as the only options. This would be deeply unsatisfying and potentially problematic for many reasons, not the least of which being the fact that a number of the hair sets don't really work all that well with the existing masks, so those would also have to be pulled, plus the additional complication that a few of the existing masks don't really work well with much of any of the hair sets. It's one thing to pass it off as 'oh well, legacy content, the new parts are mainly meant for use with the new content, sorry' when the new content is actually there, but that's a lot harder to justify when it's not. Relying on the existing faces would also mean losing all the effort that went into making color-matched faces for the Doll bodies. Having to go back to that glaring mismatch between the face and body skintones after seeing how good things looked with them matched up would be deeply annoying.

The other option involves going back to the plan that I very quickly abandoned when the Charmer faces first became available. Actually, it's far too generous to even call it a plan, it was more of a 'well, I guess I could do this if there's no other choice'. I've mentioned in passing how it's technically possible to do the same process I used to make masks from the Charmer faces to make a mask out of a Vanilla head mesh. The biggest problem there (aside from how generally fugly the Vanilla heads are in comparison) is that the low-poly Vanilla mesh does not have a very clean cut-line around the face. There's basically no way to excise the face from the mesh without the edges being all jagged and awful. The obvious follow-up is to find a non-Vanilla option, but of those the only one that seems to still be standing is the five-year-old CITRUS head mesh. I've seen mentions of others, but none of them seem to still be going concerns. So I grabbed it- I'd never really bothered to use it before- and whipped up a very quick test mask using one of the Vanilla presets, but, well... 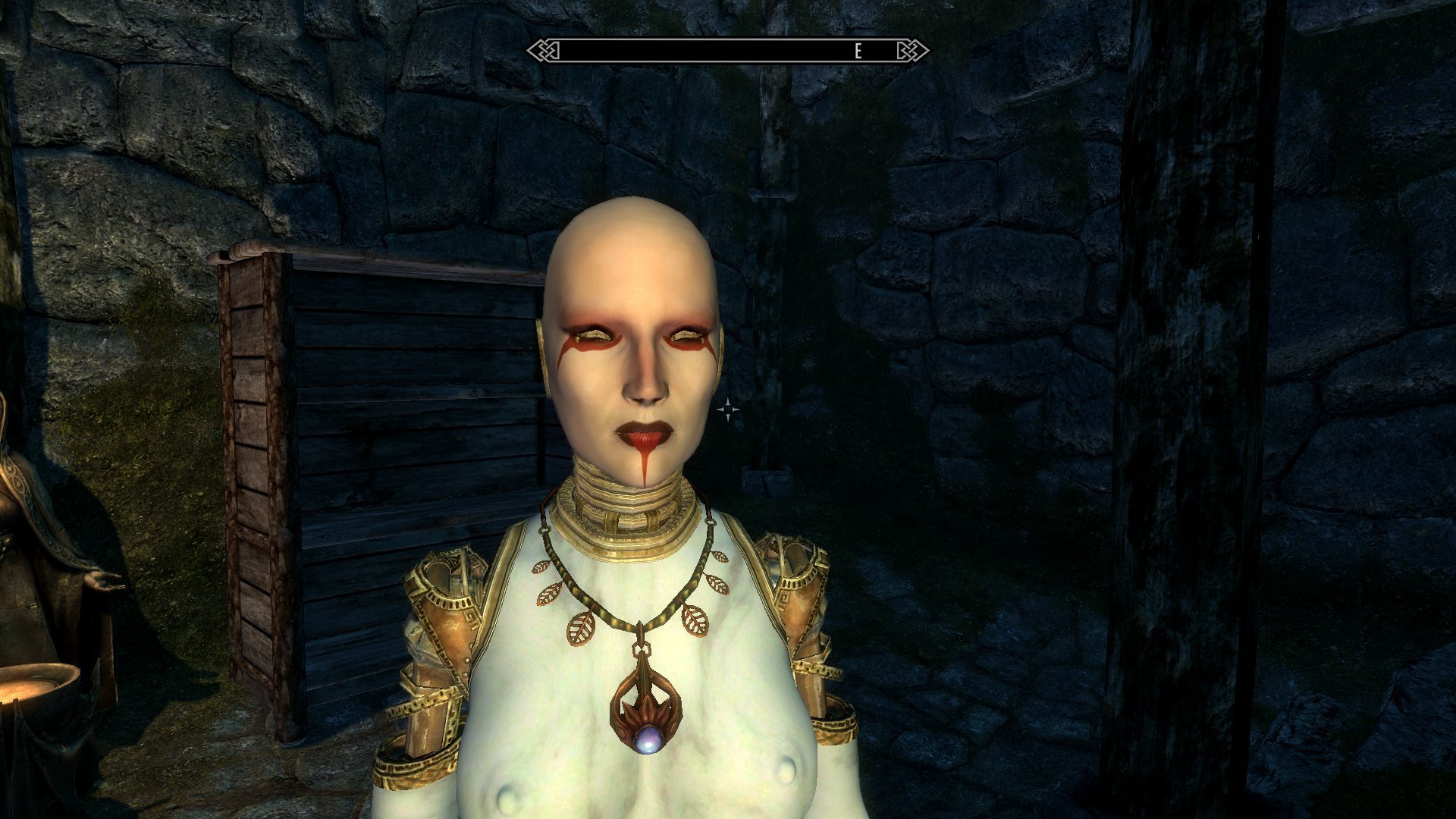 Citrus (I am not typing that in all caps all the time) is... Well, it's better than nothing. If Charmers hadn't existed, it might have been what I ended up with in the first place. But it's got some issues as far as my needs go, particularly in comparison to Charmers. First of all is that matter of the cut-line. Citrus is actually higher-poly than Charmers, but its polygons are highly rectilinear, where the Charmers mesh is much more contoured. 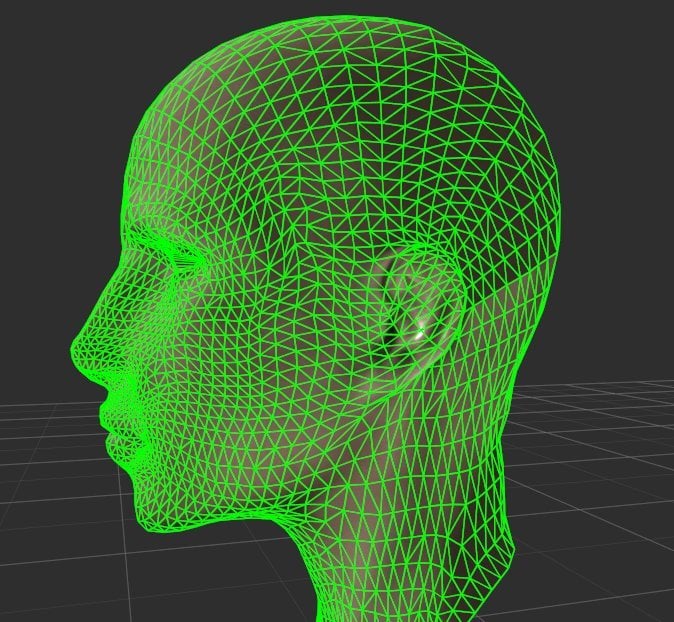 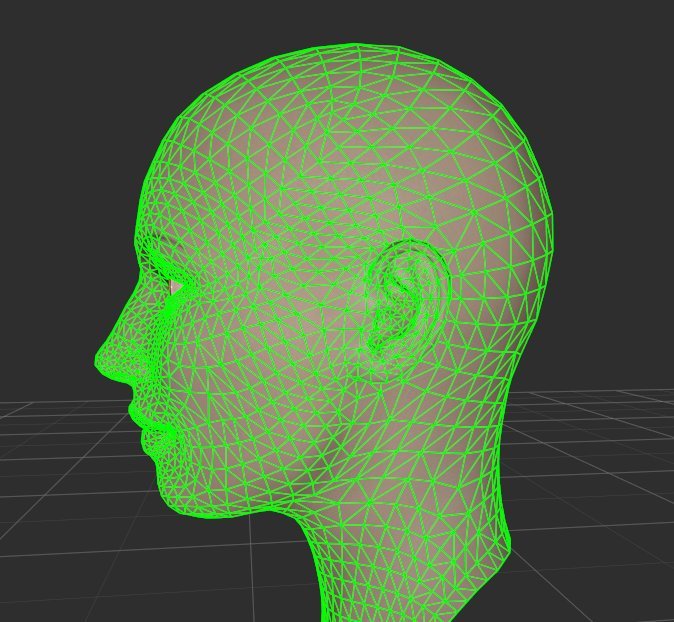 This meant that on the Charmers mesh I could cut out a mask with a relatively low forehead angled down to the section of mesh that wrapped around the ears, which then swept back into the jaw. It was a very easy aesthetic sell. 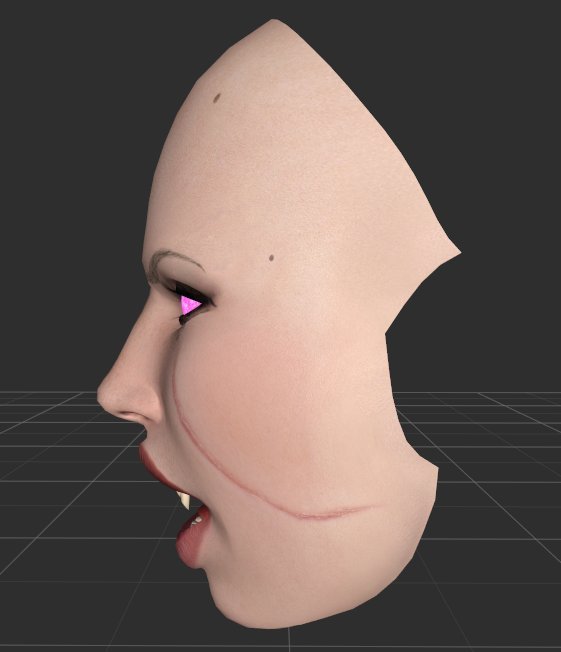 Doing the same thing on the Citrus mesh... Isn't really possible. It's mostly rectangles, with cross-bars dividing them into triangles that largely don't line up in a way that promotes angled cutting. To get a clean cut of the face you pretty much have to go straight down, and that in turn leaves you with very little of the mask coming into contact with the ear-plates that it's putatively mounted to. On top of that a clean line for the jaw is very hard to find; the one on this test is a god damned mess, but I got tired of taking the time to redo it when I just wanted to bang out a quick test-shot. 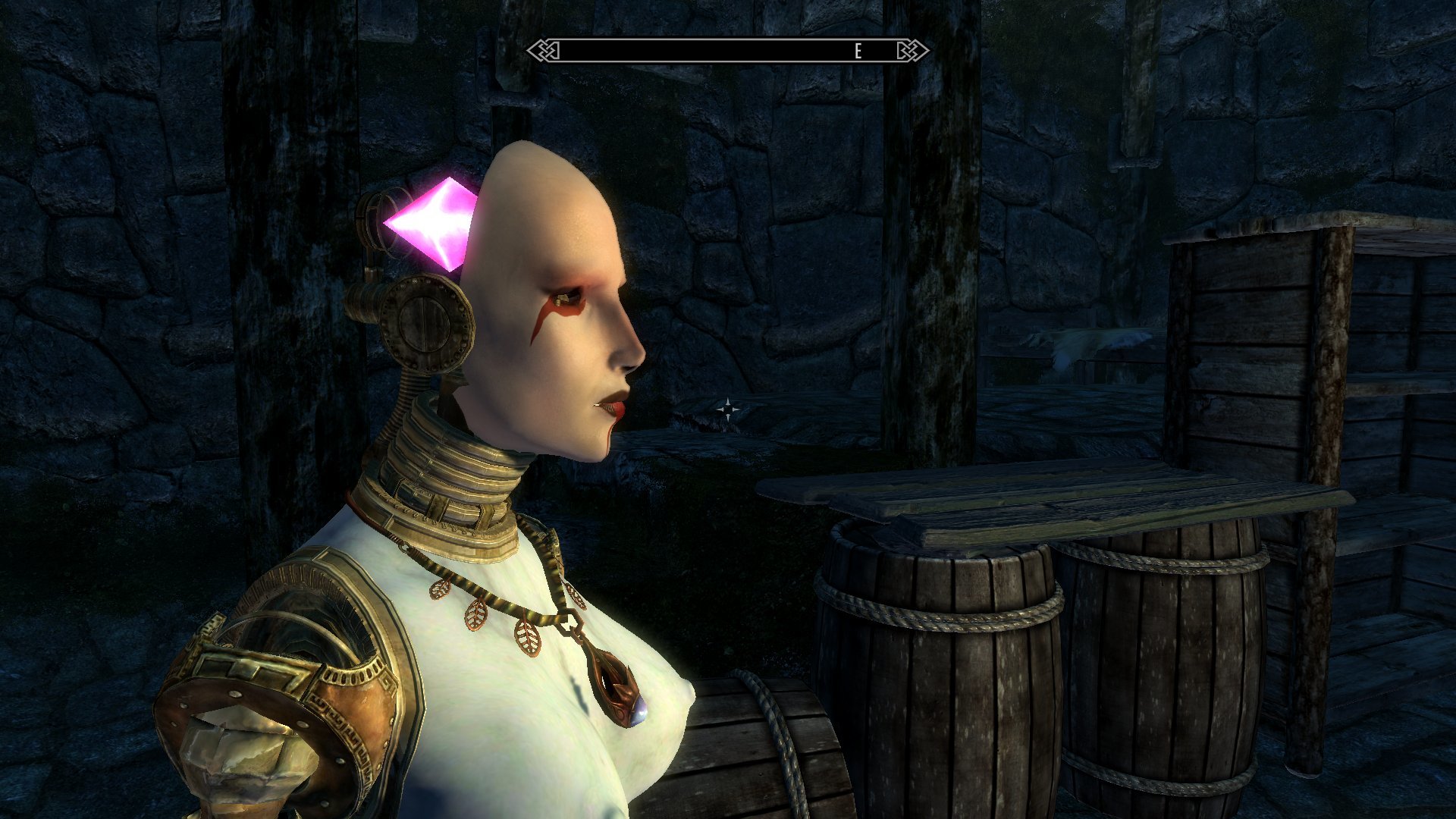 And then there's the various further problems derived from the fact that this is still aping and incorporating the Vanilla head mesh system. It still uses the original mouth/teeth mesh, which is, frankly, garbage. It uses the original eye meshes which incorporate the eyelashes and caused me all sorts of problems with that old detached head experiment, so those'll have to go. What exactly would be best to replace them I'm unsure of, and is complicated by how the more deep-set eye morphs intrude into the structural eye-mount parts of the mechanical replacement heads, as seen here, which will make finding usable face shapes all the more difficult. And sculpting those faces in the first place will be a royal pain in the ass; getting really good faces out of Skyrim is giant time-sink at the best of times, but meeting the bar set by how easy it was to get good-looking faces out quickly makes it a task I honestly dread. I just don't know if I can work up the energy to do it.

The one bright spot is that doing the skin tone-related stuff will be a bit easier. The Citrus head replaces the head mesh for the Vanilla races, so I can just directly export the model and texture file for each preset tint instead of having to save each color and apply it to the Charmers race, as I tediously had to do to get those skin tones. And I'll have access to the Vanilla makeup options, although I don't know if that's really a selling point.

As for how I'm going to move forward, what I'd like to do is have some degree of replacements for the Charmers faces in the actual release, but it's pretty much guaranteed that will significantly extend the development time. I'll be recreating work that took me weeks in the first place using worse tools and with much less enthusiasm, so I can't really expect that it'll go by quicker. The other option is to go the sans-faces route to begin with, to get the finished and otherwise functional parts of the mod out, and then add the replacement faces in later as an update. The latter will at least get the mod out in the wild in some form, but it will be deeply unsatisfying to leave it 'unfinished' like that.

There's also the fact that the COR Team says that they're working on a DAZ-less version of their mod, which would presumably make any effort put into the Citrus faces wasted, as I'd be inclined to immediately replace them with the new COR. But that also kind of depends on when the new COR comes out and what form it'll take, which are questions I can't yet answer. And even when it comes out, I'm still going to have to re-do every single bit of work on the faces. There's no quick fix, here.

I had planned to spend the near future charging forward to the release of this mod, but this development leaves too many things up in the air to do that. For the moment I've just got to wait and see how things pan out.

I want my Dibella back. 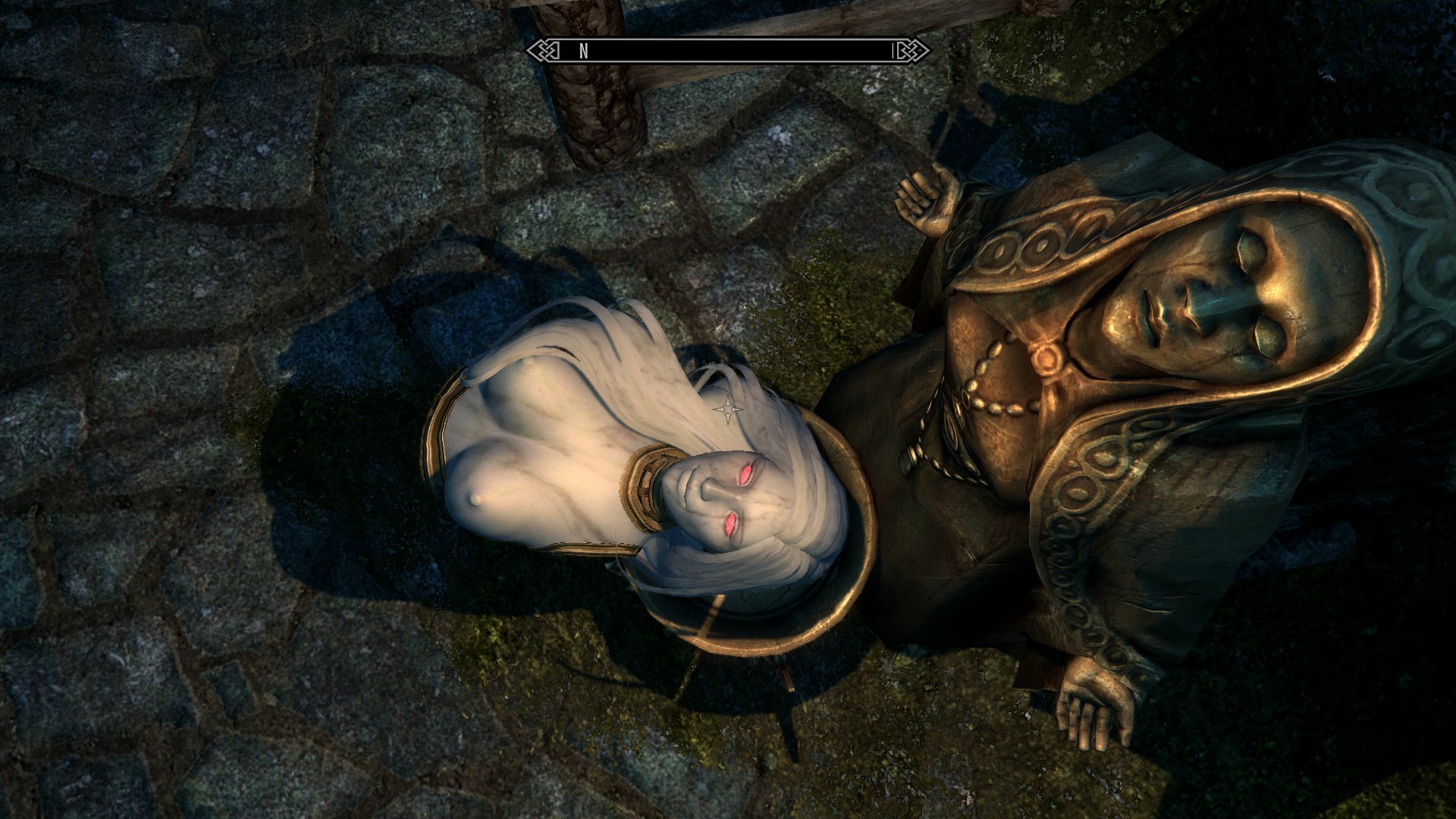