This Rimworld mod might not be for you, if you:

With the introduction of RJW 5.0 the following features were removed, it is NOT save game compatible with previous RJW versions: 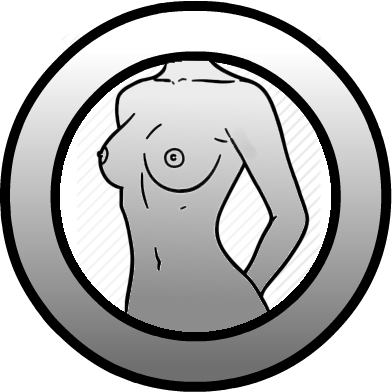 RJW adds a new Sex need with various options to relieve it. Speed of decay is effected by the Sex drive stat (adjust speed in Basic Settings).

For a pawn to be able to have sex it needs to be of age, you can switch between lifestage depended or legacy version (appropriate age determined by percentage of life expectancy), old and very young pawns will be less/not targeted. Pawns will choose their partners based on their sexuality (⇒RJW Infotab) if they have a choice.

RJW does not change romantic factors (beyond opinion boni/mali from sex and rape) whether your pawns want get married or not is not changed by RJW. 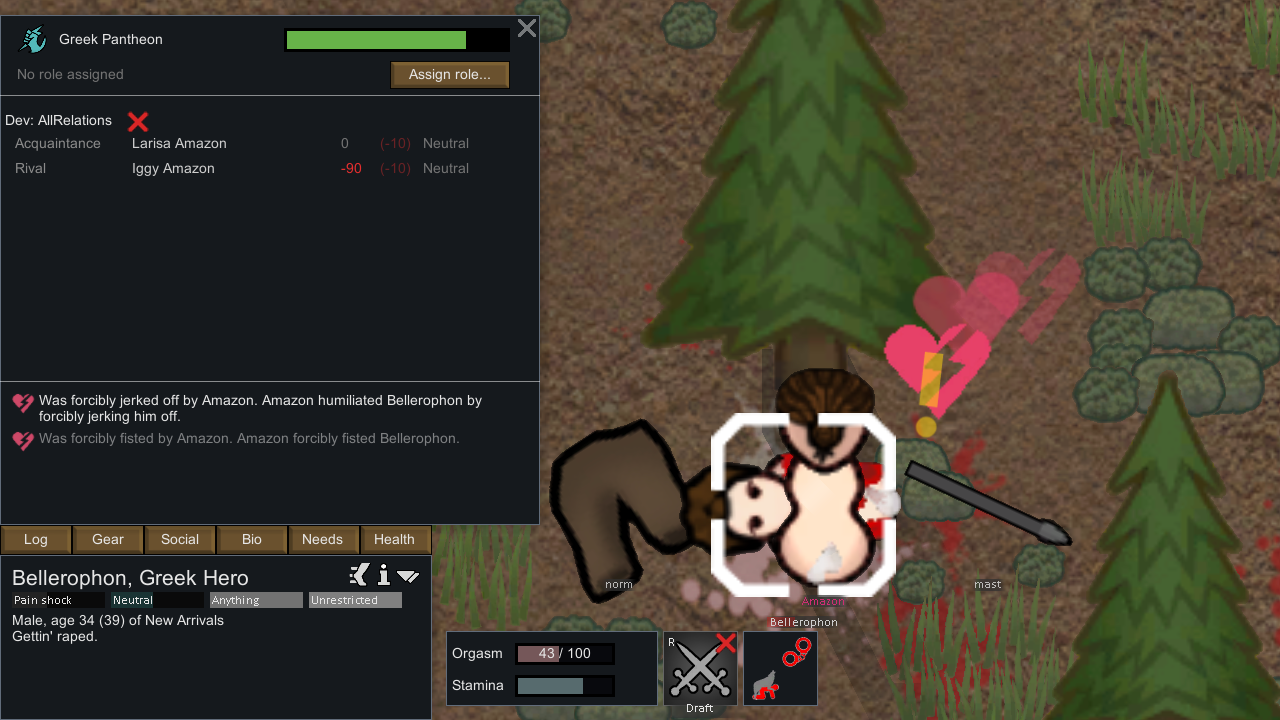 RJW adds some traits to the random trait pool which are:

Some other traits which have effects:

The infotab shows the sexuality, by default determined by the vanilla sexuality traits, change sexuality source in the settings if you use a mod that changes this system. In the Infotab you will also see the pawns whoring price and:

Quirks have minor effects, and cover fetishes and paraphilias that don't have large enough impact on the gameplay to be implemented as actual traits. You can check if your pawns have any quirks by using the new icon in the Bio-tab. Some quirks are also available to animals. A pawn has quirks, if the icon is glowing. RJW currently features:

Racial preferences: (can be assigned even if you don't have any matching races installed)

You can edit quirks from your Heroes at any time, from everyone else at game start or with dev mode enabled, just click on the quirk or reroll button. 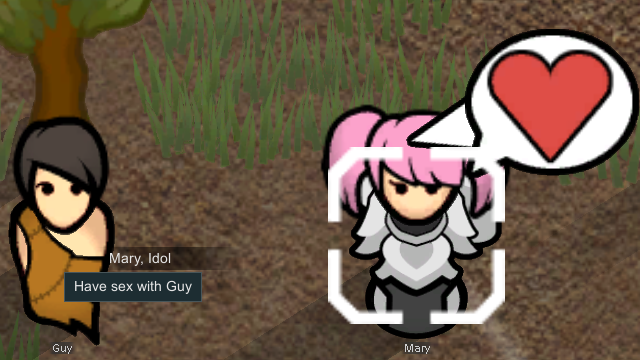 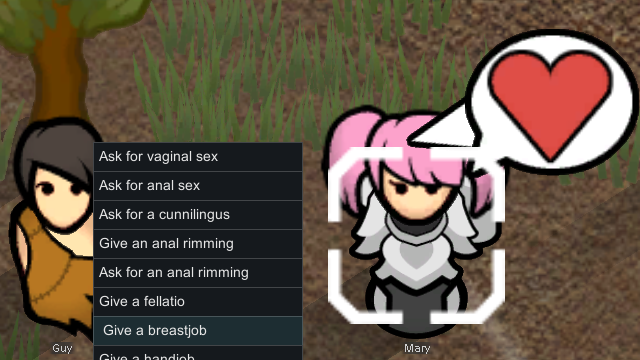 Choose one pawn to be your "Hero" for life and gain direct control over this pawns sexual actions, while ignoring requirements as long as (s)he is free and in your faction. Great with the multiplayer mod. Check the settings. 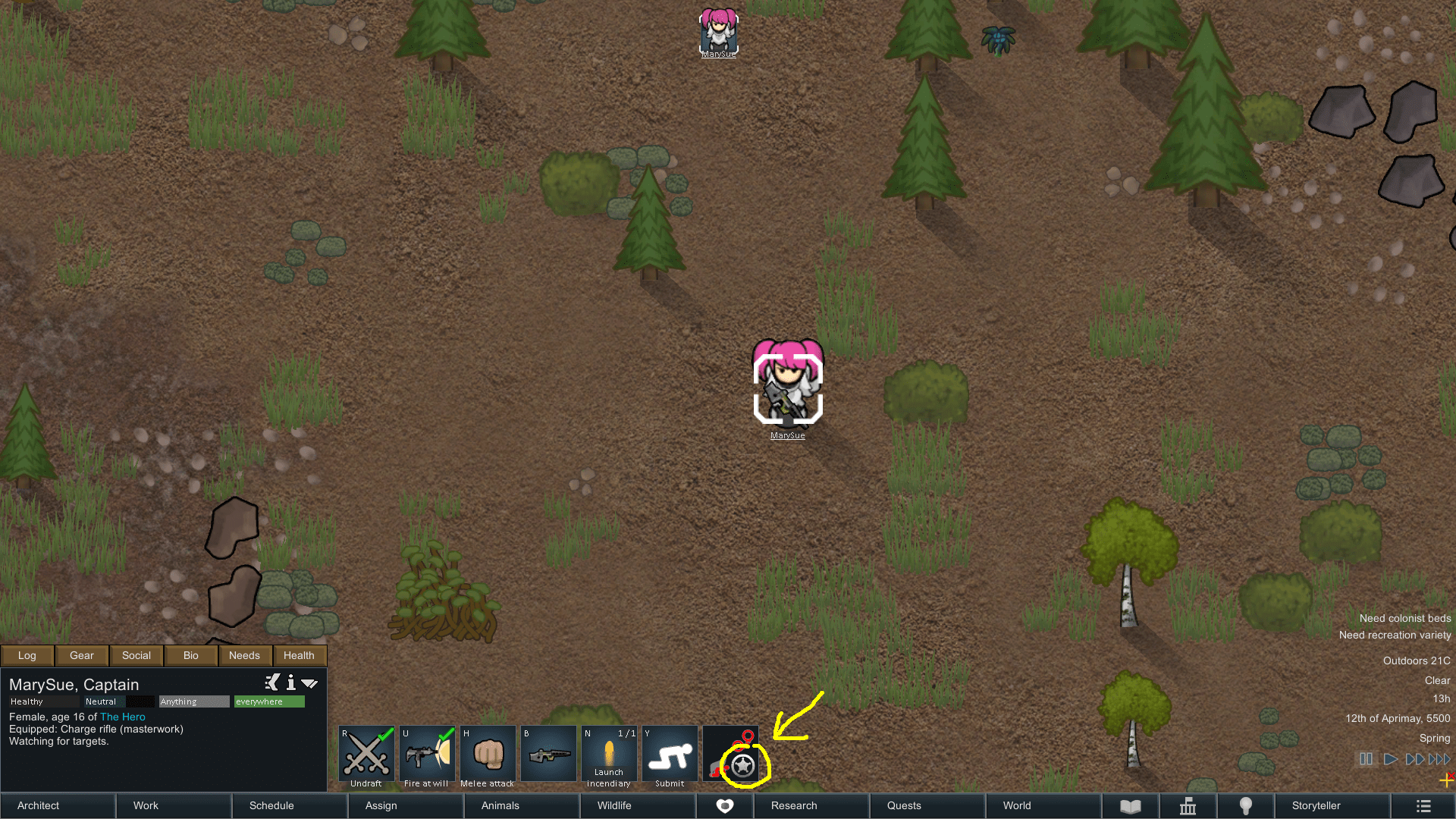 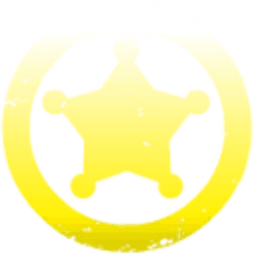 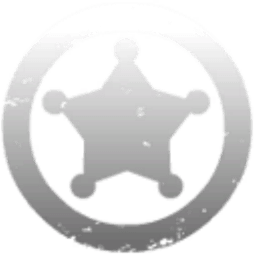 Beware to be swarmed by a wave of naked hypersexuals who are coming for your ass.

Enable Wild mode for a less restricted experience (removes most restrictions and requirements for many RJW features), will result in unpredictable behavior, don't report bugs if you've enabled this.

Change the hookup settings to your liking in the mod settings. 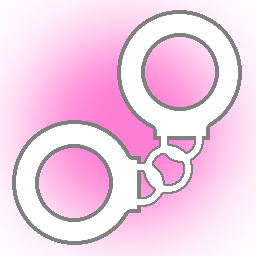 Another optional way to relieve "stress" is rape. Likely targets are disliked pawns of preferred gender with high vulnerability.

Rape can be triggered in multiple ways:

Desperate pawns might see no other option but to satisfy themselves even without their partners' consent.

Pawns with the Rapist trait don't care much about the feelings of others and just take what they need.

To designate your hero, prisoners, slaves or masochist colonists for comfort rape (free use onahole) just disable their consent: 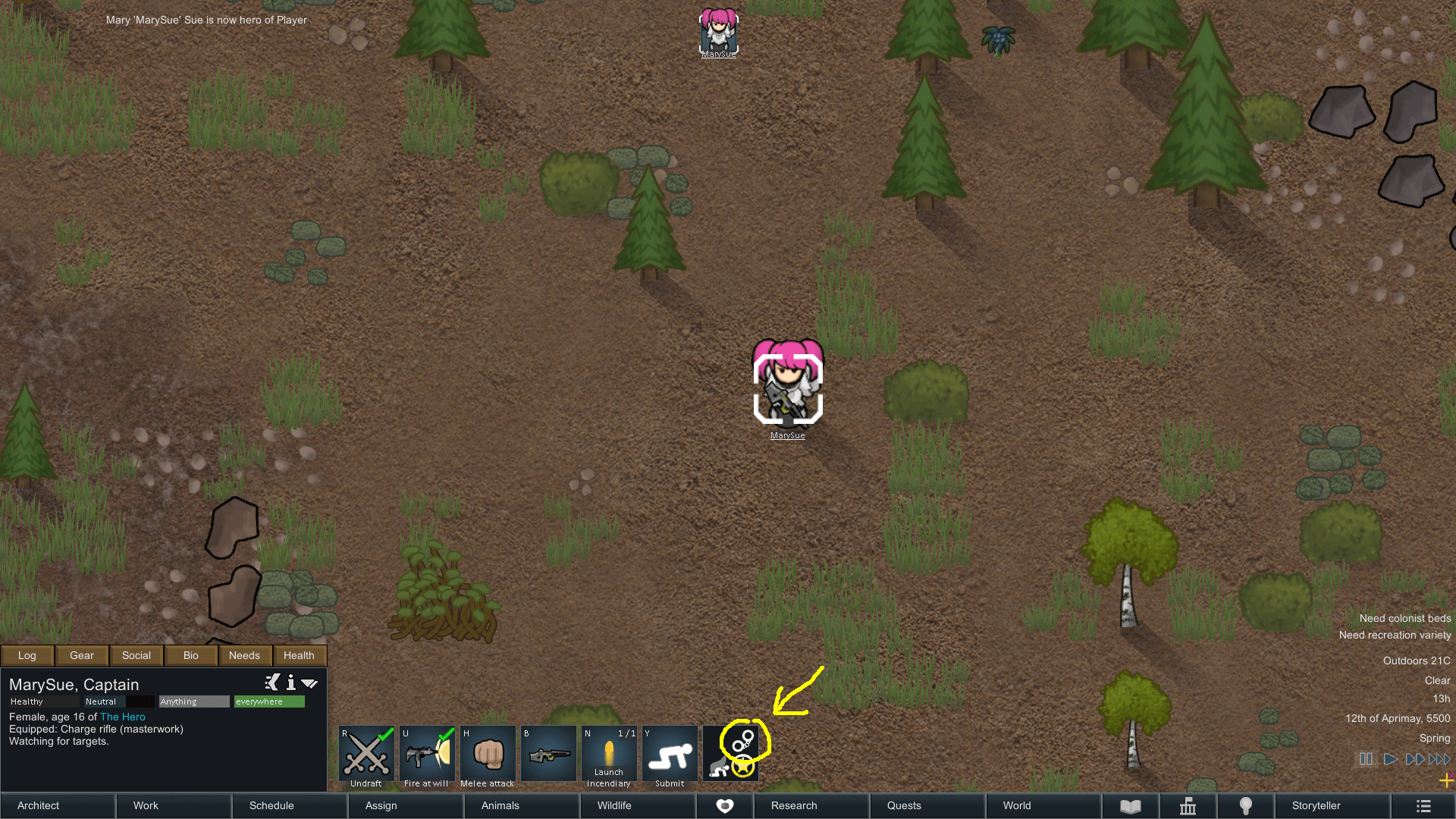 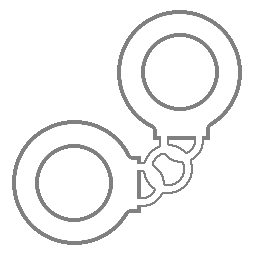 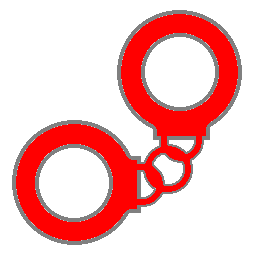 Might lead to a lot of pawns becoming rapists in your colony, you can disable rapist gain in the debug settings. 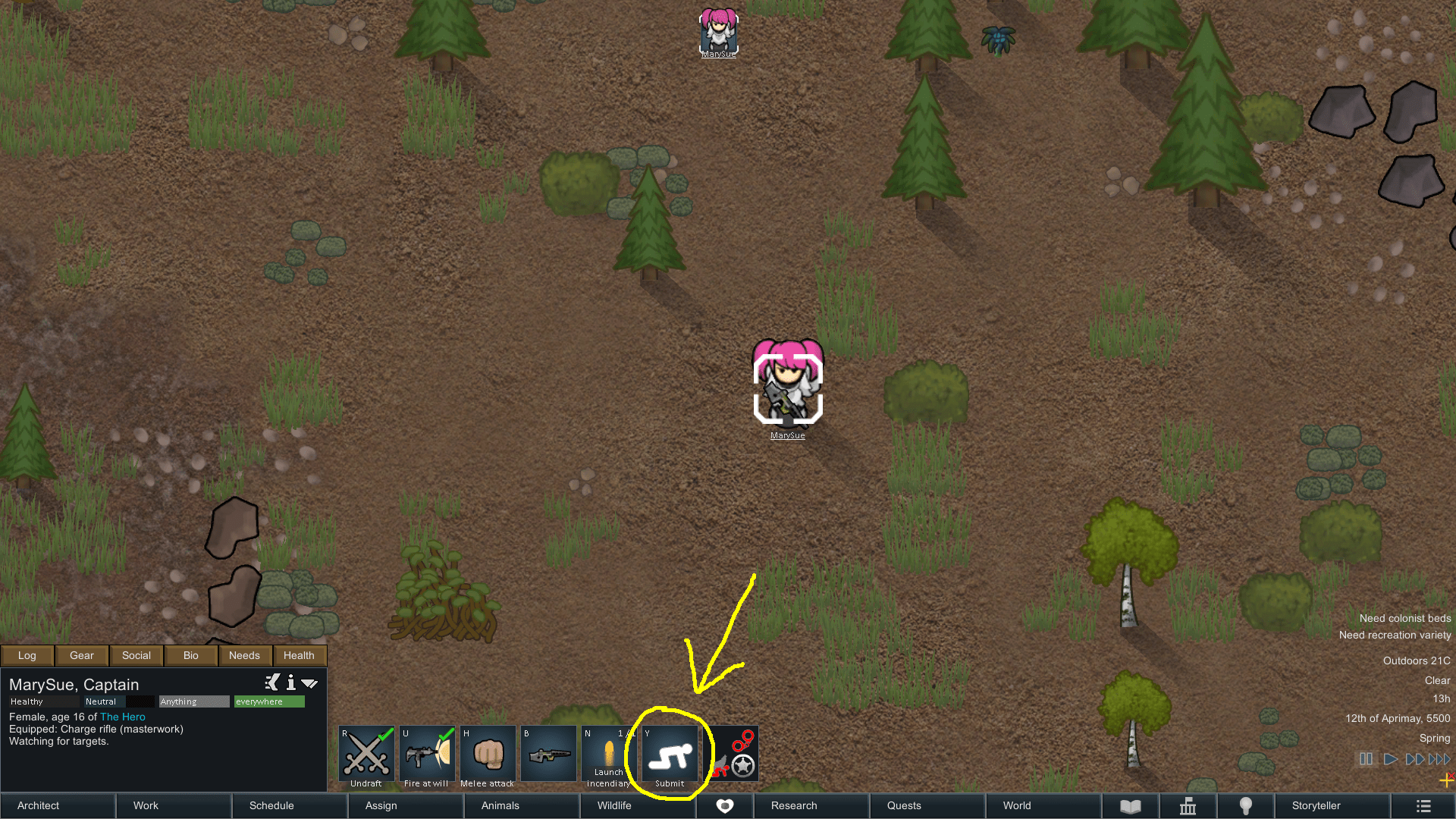 The prostrating effect lasts as long as the victim is raped, but at least 1-2 hours. 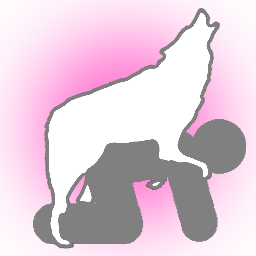 Enable in mod options, as it's regarded as rape you need to enable both. Zoophiles will prefer animal sex partners over humans. Animals with high wildness might try to flee or attack, when molested. Animals with high wildness, predators or greatly different size are less likely to be chosen as sexpartner - stoned/high pawns might still do it. Animals might attack or flee if they don't consent. You can enable animal-human pregnancies.

You can mark prisoners or zoophile colonists and animals to breed (male animals only if they're tamed): 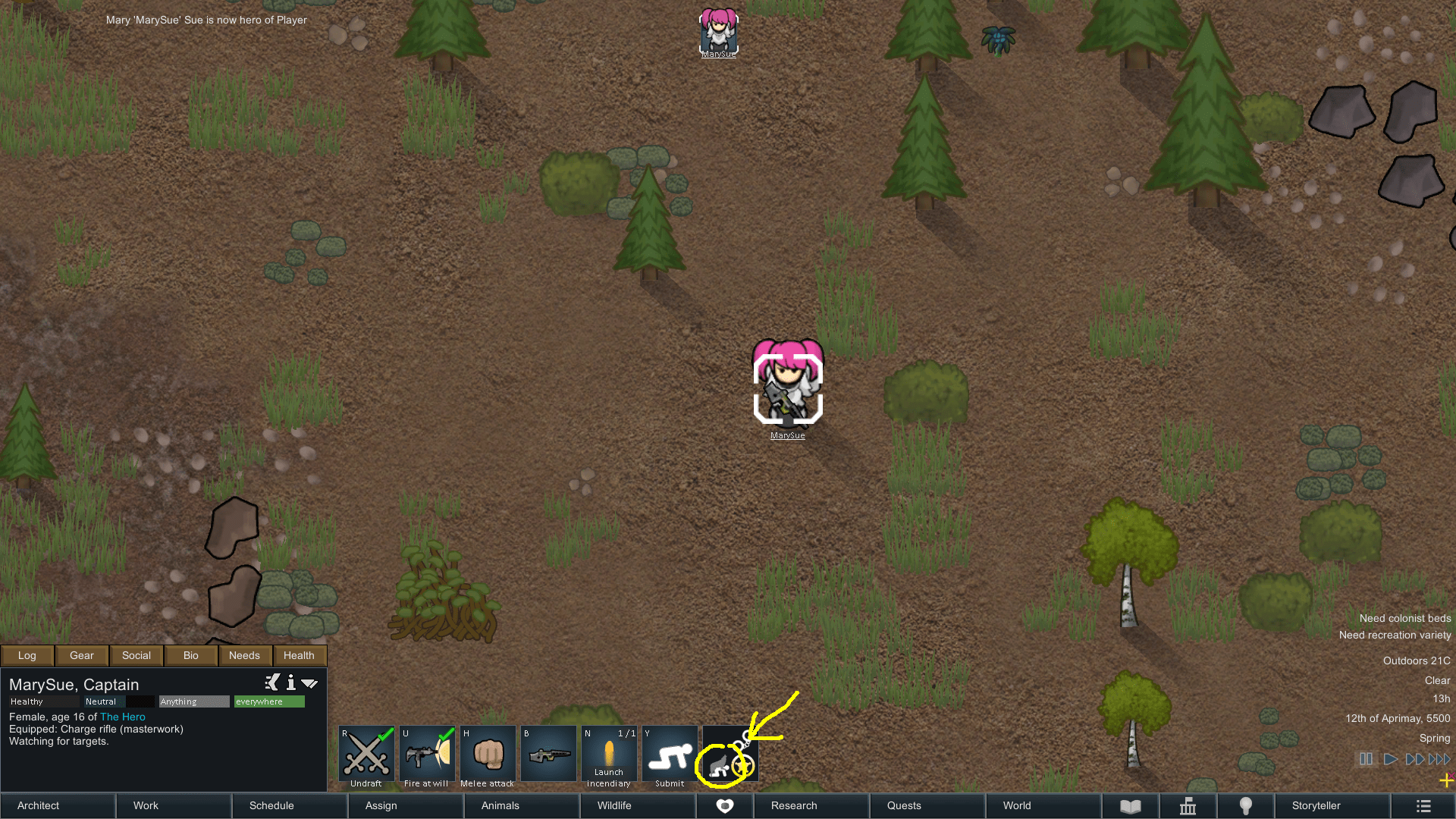 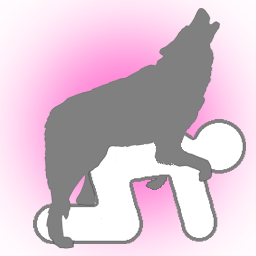 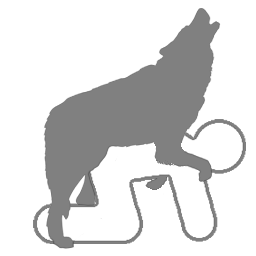 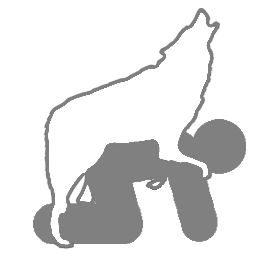 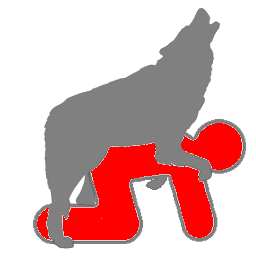 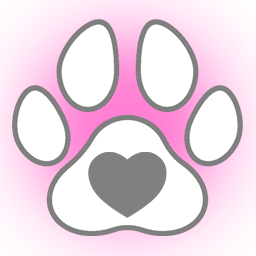 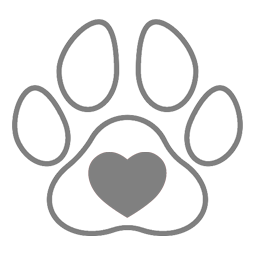 Not sure if the following description is still accurate, don't count on it.

Insects will restrain their egged enemies with a cocoon (removable with surgery), which passively feeds and heals up the victim. Female insects inject eggs into the pawns and a male insect can fertilize them. The eggs incubate inside the host and hatch if the host dies. Eggs will terminate any other pregnancy and prevent new ones, slow your pawn down. Their numbers are capped, depending on the size of the race (pawn fits more with Incubator quirk or ovipositor). When its time to hatch the unfertilized eggs hatch as insect jelly, fertilized produce offspring. Most spawn will be hostile, but if the host has high psychic sensitivity the offspring might be tameable.

Rape by Mechanoids impregnates females with hostile seeds which will destroy their hosts torso on hatching. Unless you find out about the Pregnancy (Determine Pregnancy operation) and surgically remove them in time with 10 Glittertech medicines.

You can activate wild animal Sex in the settings. Wild animals of the same species will bang and eventually populate the entire map, beware of boomrat swarms.

Pregnancies can happen when two fertile pawns engage in vaginal sex (chances/pregnancy mode adjustable). Pregnancies last for the creatures gestation time - 3 trimesters for humans (breeder trait reduces gestation time) and will be invisible for the first few weeks, how long depends on bodytype. If you successfully "check pregnancy" early you can abort the baby. Miscarriages can happen if mother gets injured/sick/malnourished. Fertility also effects the number of children.

'Simple' humanlike babies can't move or do any work until they are of age (4). Colony animal babies will be born tamed. Prisoner children have to be recruited to be part of the colony. Most traits and bodyparts can be inherited. Some races like the Undead or Androids won't get pregnant. Slimes only get pregnant from sex with penises (not slime tentacles).

Children inherit the status (colonist/slave/prisoner) of their mother at their creation, if the mother gets recruited after, the child will still be born a slave/prisoner. Enable fantasy pregnancy to make everything faster.

Once enabled, necrophiliacs will be able to use corpses for pleasure, someone desperate might try as well.

Genitals can have various types like hydraulic, generic, equine and have sizes relative to their owners body, so a dragon penis that is large if attached to a human might be tiny if you attach it to a dragon.

Hydraulic parts can be crafted on machining bench, bionics at fabrication bench - after research. Archotech parts are only available through trade and missions. The Peg dick is craftable at the crafting spot.

Slime Races can change their bodyparts at will at the cost of food need.

You can change various bodyparts through surgery.

If you replace genitals (penis & vagina) with one of the other gender you change the gender of your pawn. The pawns will be horrified at first but get used to their new body after a while (~1 year).

Note: Rimworld only has males and females, that means if you want 2 female futas to voluntarily fuck another they need to be gay or bisexual.

in a trance -> broken -> extremely broken with worsening penalties to consciousness. They will loose their rapist trait (if present) and gain masochist trait at the final stage (5% chance for each additional rape). After a few days without rape the broken pawn should slowly begin to recover. 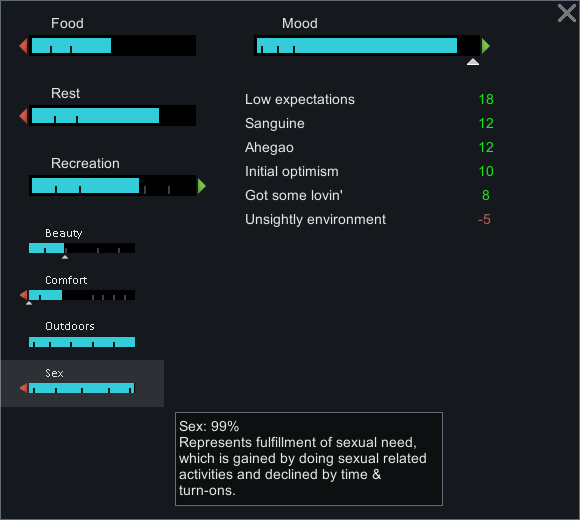 This is similar to Hunger Rate or Rest Rate in the base game. It affects how fast the sex need goes down. Having a higher sex drive means a pawn's sex need will go down faster and they will want sex more often. Conversely, having a low sex drive means the pawn can go for longer without sex and remain happy.

Sex drive is affected by the following base values: 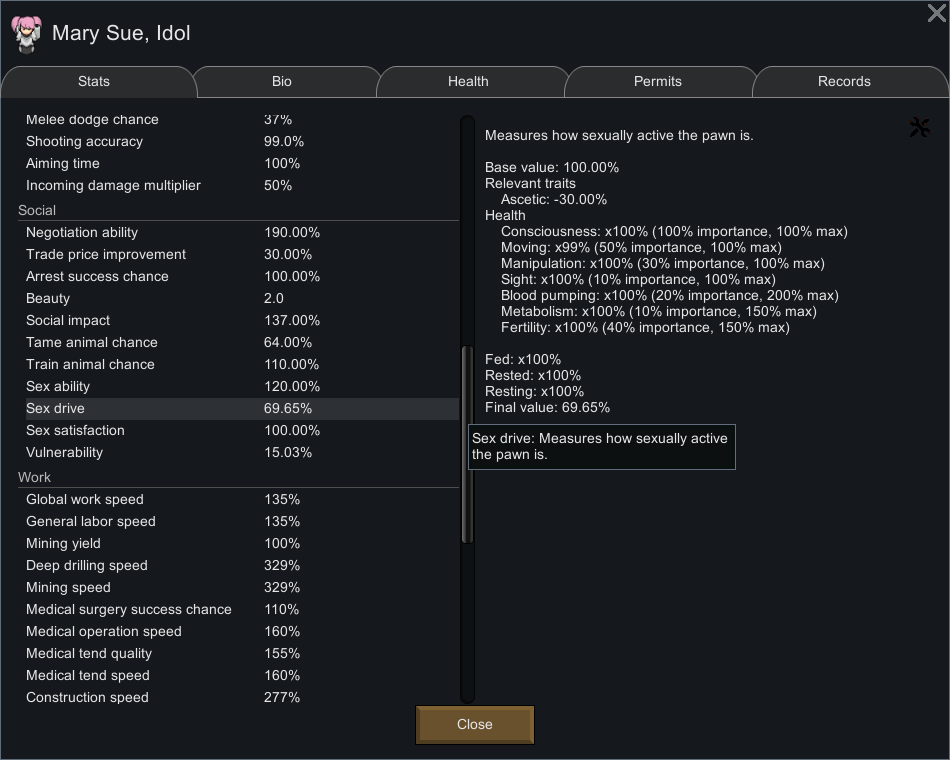 Sex Satisfaction (Added in RJW 4.4.6)
This is almost the inverse of Sex Ability. Sex Satisfaction is how much enjoyment a pawn gets out of sex, regardless of their partner's abilities. Having a high Sex Satisfaction will result in a pawn's sex need filling up more from sex, making them more likely to get positive mood buffs after sex. Conversely, having a low Sex Satisfaction means that a pawn has a hard time being satisfied by sex, and will not have their need filled as easily.

Sex Satisfaction is affected by the following base values:


Vulnerability
This represents how easy it is for a pawn to be taken advantage of sexually. A high Vulnerability will mean a pawn is more likely to be the target of rape and less able to resist it. Conversely, a low Vulnerability value means a pawn will be targeted by rapists less often. Females can only rape if their vulnerability is lower then the limit set in the settings.

Vulnerability is affected by the following base values:
(These values are inverted, meaning a higher value gives a lower vulnerability score) 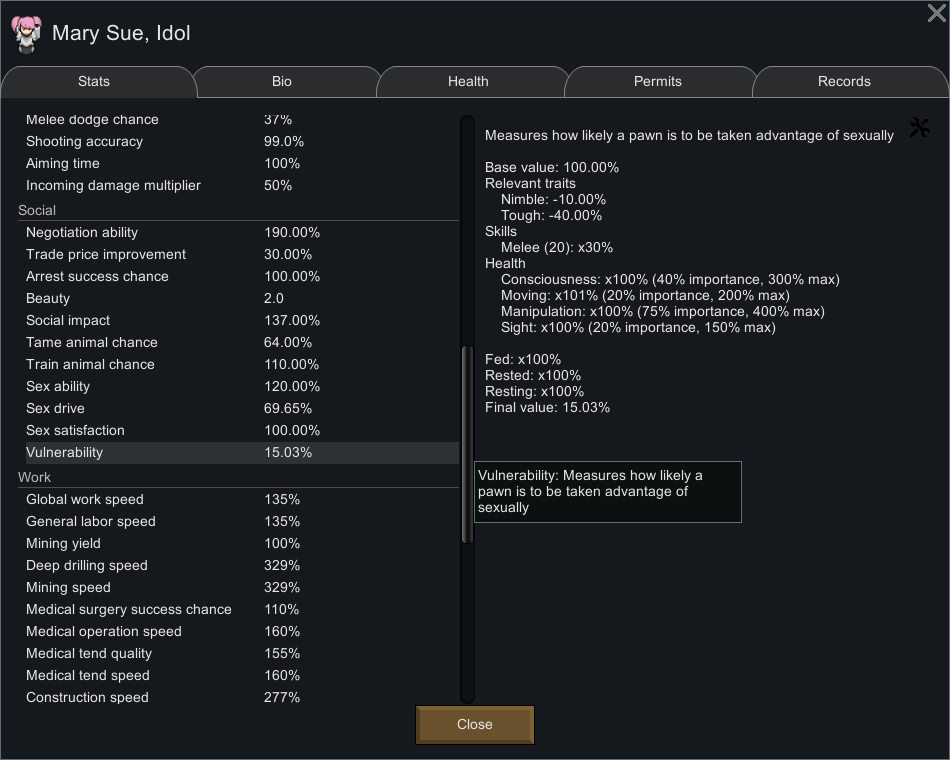 Fertility
Represents how likely a pawn is to get pregnant or impregnate a partner during sex. This is affected by part health and some health conditions, like IUDs and various sex drugs.

Some features require the designators which can be toggled in the settings and there: Also thanks to the many community contributors: