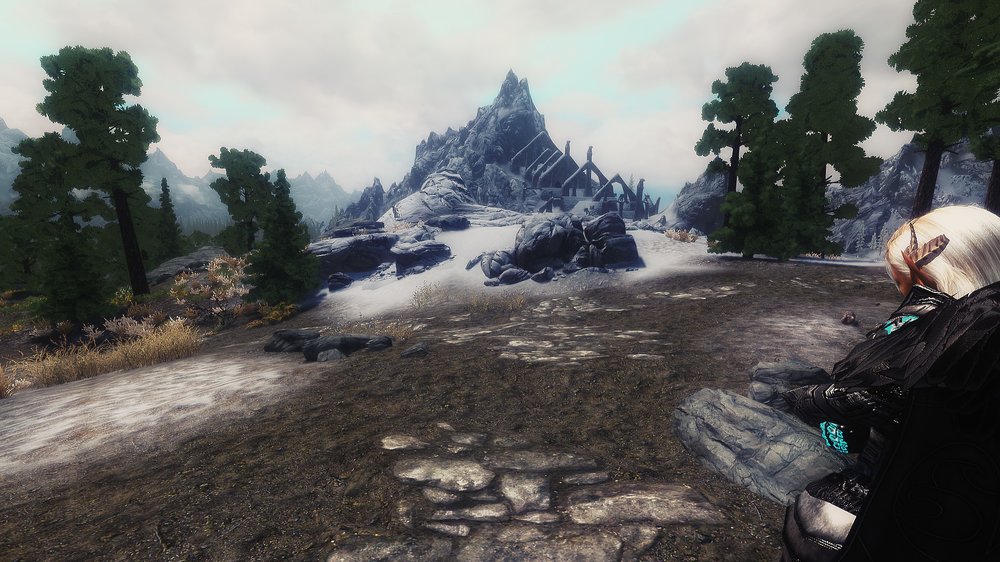 As the sun indicated that midday has arrived the dying screams coming out of Helgen suddenly stopped and were replaced by total silence. Nothing except the wind blowing though the streets made any noise; the dead silenced the living. And so Nendala turned her back to the settlement, leaving the corpses and wandering skeletons back behind.

She followed the street leading further into the lands until she reached a crossroad.

Unsure where to go the elf stopped and stared at the center of the road. The gigantic ruins of Bleak Falls thrones like a momument of ancient Nord might, but this almost overwhelming view on Skyrim in the distant remained without attention from Nendala. She simply stared at the road and slowly lost herself in her thoughts and memories.

The arrow hit the center of the target and the boy jumped out of joy that he finally performed his first masterful shot.

"Congratulations, my Lord, your skills with the bow grow impressive", nodded the elderly man next to him, but he completely ignored his words and turned around."I made it! Have you seen it, mother? I made it!"

Immediately the boy got disappointed though. This was a great moment for him, yet everything got ruined within the blink of an eye. Instead of being happy for him his mother barely even noticed his success, she almost completely focused on a magical orange dust she playfully let dance around her hand.

The teacher shook his head because he told the woman more than once that this is not the proper way to raise and educate her son. He placed his hand on her shoulder to get her attention."Your Majesty, wasn't that a great achievement your son can be proud of?"

Rather irritated the queen looked at the old man while letting the magical dust disappear. After a short moment she placed her attention on the young boy who seemed to be close to crying and stroked the hair on his head with her hand. "Well done, my little boy."

Comforted by his mother the child looked up at her while rubbing his eye. He looked into her face, just to realize that she barely focused on him anymore and instead stared into the magical dust that she again let fly around in order to make out the outlines of various objects. Filled by the frustration he ran away with tears running down his cheek.

"Pardon me if I once again annoy you by saying this, your Highness, but as his mother you should.." The elf got interrupted by the woman who clearly was displeased by him for mentioning this. "He is my investment, don't forget that, old man."

Suddenly a strangely sweet smell filled Nendalas nose. Even though she lost her ability to distinquish between the endless amount of tastes there was a single one she still could hold apart from the others. It was the scent of strong ancient magicka of her ancestors. Common mages were not sensory enough to realize it was there, but for her this sweetness comforted her with an almost homey feeling. Within the last centuries she followed this scent and now it yet again led her further towards her goal.

Unlike the roads she has followed so far in this province of men which were covered in snow and ice these ones leading towards the west barely were covered by a single snowflake. The penetrating cold of the mountains were replaced by a rather moderate climate, almost warm if it wouldn't be for the slight breeze that cooled the air down.

After a time that maybe were a few hours but also easily could have been almost the entire day Nendala spotted a figure in the distance that ran into her direction. Shortly after that she realized that 3 other figures followed and chased after the first one. These 3 appeared to be bigger than the first one, actually much bigger as far as she could tell. While the first figure only wore a blue robe the ones chasing it were fully armed in scale and leather armors and drawn weapons thirsting for blood.

The queen continued to go her way as if nothing interesting would go on, uncertain what actually was going on.

A frightened voice that belonged to a rather young man drew her attention. "Help me! By the blood of Dibella's period, help me!". Clearly out of breath the man slowed down, but his attackers relentlessly continued their chase. Still Nendala was not sure what this was all about, but something in the young man's voice let some kind of excitement grow inside of her, a feeling that made her want to protect him.

"Ha, whimpy mage, I told you we will get you!", laughed the Orc who seemed to be the leader of the other two armored men. "Now you will pay for what you have done. Or rather forget to do!"

The young man speeded up again for a short sprint until he fell closely behind Nendala on the ground out of exhaustion. Unable to catch his breath again he looked up at the woman with fear on his face. At first he wanted to say something, but as he saw the dry elven skin that was covered by mutliple cracks he just stared at her with an open mouth.

Only moments after the blue robed man fell to the ground the three chasers catched up and the Orc pointed his weapon at Nendala, threatening her if she isn't willed to hand them over their victim.

"You there, little elf, step aside so we can make him pay!"

"Hurry up, or else we will make you regret it while we rape your ass!"

The other two bandits were laughing and noded at their leader who slowly stepped closer towards Nendala. As his axe was only a few centimeters away from her the Orc suddenly stopped and Nendala placed her hand on his chest to infuse him with an ancient spell. His limbs started to shiver, slightly at first but rapidly his whole body shook like in a spasm.

While turning around towards his confused mates he fell on the ground as a reddish sheen appeared around his skin. The screams of pain grew louder and stronger as his whole body began to burn due to the reversed fire shield spell; instead of creating a protective should around the bandit that emited heat towards the surroundings he got trapped into a tiny prison that heated him up like the fires of hell.

Terrified his friends watched as the flesh got burned alive and steadily turned the former mighty Orismer into a pile of bones and ashes. With a last cry the Orc dropped dead to the ground, causing the remaining bandits to flee in fear.

The elven queen turned around to the man at her feet. Clearly the exhaustion caused him to pass out and now he helplessly lied in front of her, so she kneeled down to take a closer look at him. Again the sweet smell entered her nose and again a slight excitement arose in her mind again. Now she knew that he must at least have seen her precious treasure and therefore can help her to find it again, he just needed to wake up.

So Nendala stared at him and waited.