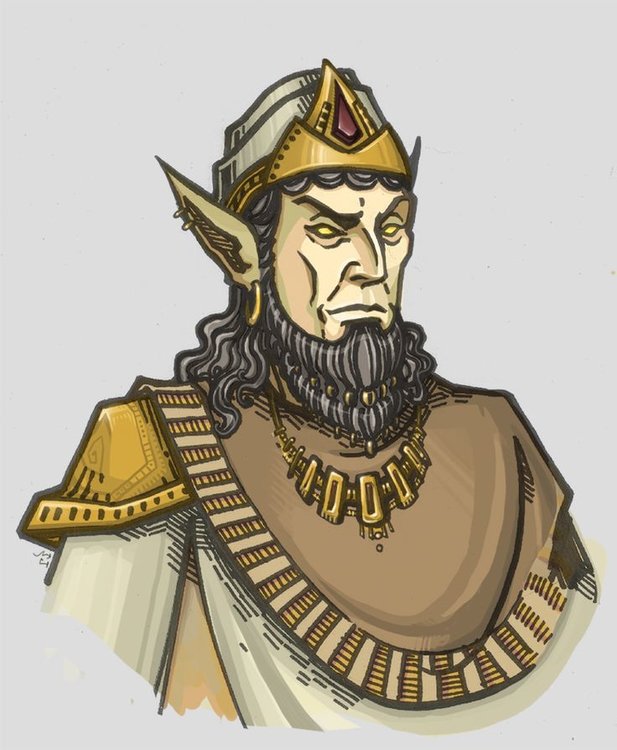 Nchella descended the stairs, her path lit by bluish flame from the lanterns evenly spaced upon the wall. It was a beautiful day above in Volenfell. Part of Nchella wished to stay above and take in the sunlight, but her uncle's summons suggested a degree of urgency. She wasted little time descending into his underground laboratory. She found his door open and slipped inside.

Before long she happened upon a figure huddled over a square device with several panels pulled back, revealing complex inner workings. Nchella was no slouch in arcano-clockwork mechanics, but Mzencheld, her uncle, made her look like a mere child incomparison. "Uncle?" Nchella called out.

Mzencheld turned around and reeled back with mild surprise. "Oh, goodness, child!" he said, grasping at his heart. His grey beard clinked as the ornaments he wore clattered together. "Bad enough, sneaking up on an old man. But dressed like that...! You're liable to give someone a heart attack, girl!"

Nchella rolled her eyes, grinning. "Did you call me down here to chastise my choice in clothing?" she asked jokingly.

"Oh, goodness no," Mzencheld said. "Come, come," he gestured to the device. It was a large cube, about a meter tall, its surface adorned in ornamented greebles concealing panel edges. The parts of the interior she could see buzzed with life, magic pulsing through jewels and soul gems set in various gyros and settings.

"It's beautiful," Nchella said, "but what exactly is it?"

Mzencheld smiled warmly. "It's a corporea-temporal spatial displacement device. My own design!"

"A device that displaces physical forms in time and space?" Nchella wondered aloud. "An impressive achievement, if it works, but... why? What do you plan to do with it?"

"Well," Mzencheld said, "as you know, Mark and Recall spells are taxing to use on more than a handful of subject simultaneously. Further, while teleportation pads are theoretically unlimited in the mass they can move, they are still limited by their own size. My device would allow teleportation and transportation between sending and recieving devices whose maximum mass payload is effectively unlimited, save only for the space available at the recieving end!"

"A mass transporter!" Nchella said excitedly. She leaned in and examined the device carefully, smiling ear to ear. "Uncle, if this works, you may finally get the recognition you deserve!"

"Oh, child," Mzencheld laughed, "this isn't about recognition. I simply want to make travel between all the great clans easier, to make life better for everyone. Clan Rourken has been divided from our brothers in the east for too long."

"Indeed..." Nchella agreed. She'd heard the fighting in the land called Morrowind was growing more and more fierce as the Dwemer and Chimer fought. Rumor had it the eastern clans had found the heart of a god and were trying to build one for themselves. A chill gripped her whenever she heard more news. Nothing good could come of this conflict, of that she was certain.

"Obviously, I'll need to miniaturize the design to a degree, but that can be done in iterations. More importantly, I need a working example," Mzencheld said. His eyes settled on his niece.

Nchella, lost in examining the machine, finally noticed him staring at her. "...Wait. You didn't just call me here to see your invention, did you?"

"No, my girl. I needed a live test subject, one I could trust."

Nchella glanced back at the machine. The idea of being the first live subject to go through a transporter made her... uneasy, to say the least.

"I see that look in your eye," Mzencheld said. "I wouldn't ask you to do this if I wasn't sure it would work. I've already sent numerous living things through, all emerged unscathed. You will simply be the... biggest. And smartest."

Nchella looked at the machine again and sighed. "Alright, fine. Because I trust you."

"Good," Mzencheld said, moving quickly to a nearby table. He picked a control rod up and waved it at Nchella. "Stand exactly where you are. When I wave this wand, you'll vanish from now, and reappear about three minutes in the future in my spare room, where the reciever is placed. Are you ready?"

"You as well," Nchella said. Mzencheld swung the wand, and the world around her was engulfed in pale blue light. She felt her form enveloped in tingling energy, and watched her body seem to stretch and warp. The experience was surreal, utterly painless, and singularly fascinating.

When she solidified again, however, all she knew darkness. The air was stale and dusty, and so dry that her lungs burned as she gasped. She took her greatsword off her back and ignited its energized blade, casting a lonely light onto a grim scene. She recognized her uncle's spare room, but something was very wrong. Everything looked like it had laid untouched for eons. Fear gripped her as she ran for the door. She pushed it open, emerging into the main laboratory, only to find it in the same state of disarray. Everything looked exactly the way it did when she was transported, but covered in dust and cobwebs, utterly disused.

Panicked, Nchella called out for her uncle. Nothing. She searched every room only to be greeted by the same sight. Terrified and unsure what else to do, she made her way outside. She had to reach the city. Surely someone would be there, perhaps even someone who could help. She climbed the circular staircase towards the surface exit, but immediately realized something was wrong here as well. Sand seemed to have found its way into the passage. "No, no...!" she muttered, running up the last sloped hallway. She fell to her knees. The doors were wide open, and nothing but sand poured through.

For what seemed like an eternity, she sat there. "Okay, Nchella," she said to herself. "Something very bad has happened. But you're still alive. For now. You have to stay that way. Stay alive." Her pale eyes locked onto the sand, motionless, piled through the door. "Stay alive," she repeated.

And she started digging.

Hopefully that was entertaining. It went a little longer than I initially planned, but it was enjoyable. Keep in mind, I just blasted this out stream-of-consciousness, so any errors are to be squarely blamed on me.

It was fun trying to come up with a lore-friendly way a Dwemer could have escaped the event that wiped them all from existence. The way I figure it, the only way to avoid it was to be completely outside Mundus at the time. This is, after all, how Yagrum Bagarn managed to escape his brethrens' fate. Nchella is bright, but she is no interplanar-travelling master of magic, so her jaunt into the other places had to be by some other means. In her case, her well-meaning uncle miscalculated, sparing her a sudden end, but stranding her in a future she has no stake in.

Anyway, here's those verticals I promised.