Wow... dusty in here... Hello folks. If your 2020 sucked, add "having to constantly care for a 92 year old near vegetable of a grandfather every day" and you basically had mine.

I need this holiday... But let's be honest, I can be a glutton for punishment. So I'm going to be spending the next 25 days looking at the worst Christmas shows I can find (La la la)

Whelp, it's December 1st. The first... Being the first is important. It's the beginning, the start.... It's also the day before my credit card bill is due... excuse me..

Where was I, oh right, First. Being first to do something is a goal a lot of people strive for... but sometimes, You try so hard to get to that point, you get to the point you have to ask yourself, was it worth it?

Take for example, our first pile of garbage, "The Christmas Light", the first CGI Christmas story, released in 199 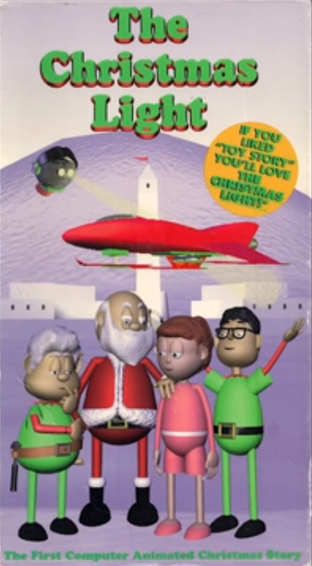 Problem #1... the note about Toy Story... This was released first.

Problem #2... the first thing you see is a message on your screen telling you that this was recorded in "EP Mode". Quick history lesson for the kids out there, VCRs used to be able to squeeze more time out of the tape by lowering the quality. By the time VHS was wound down. you could squeeze about 8 hours onto a tape...

The movie is only 23 minutes... That's like having a YouTube video only be a minute long, but only render out to 240p to "save space."

Problem #3... The CGI fall straight into "PlayStation 1 reject" territory. And here's my point about being first. Toy Story was able to be the first CGI motion picture because it had the backing and resources of a company like Disney, allowing them to make a much more realistic, if still cartoony environment. Also around at the time was "Reboot", from Mainframe entertainment, the first CGI TV series. It went the other direction, setting it's adventures inside a computer world where things didn't need to look realistic.

This is obviously done on the cheep to make a quick buck. Actually, with the exception of the fact their skin was blue, the main characters of Reboot look more realistic.

As for a story... One of santa's elves makes a machine that can make any toy. problem is, when he uses it to make a toy train to show Santa... the toy explodes. Santa tells him he can't use the machine, sending the elf in question off the deep end. He "sings" a "song" (he tries to be lyrical and it's set to music, but it sounds more like a poor attempt at slam poetry...) to give Santa a "reason you suck" speech... only to fall into his machine, explode and somehow be turned into a living snowman... You guess is as good as mine. He flies off to ruin christmas... and gets defeated by the first house he comes across when a girl who lives there sings a song about the "light of Christmas being inside you..."

Yeah I'm summarizing, I have to go watch 24 more PoS videos for this project.