It was all Valentine's fault, really. He kept nagging me about those Eddie Winter holotapes, so I traveled to Mass Pike interchange as the closet point to NatickPD. But then, of course, I can't resist taking the elevator to the skyway, when I promptly went into Hunt mode, and ended up with a perfect score: nine out nine captured, zero fatalities. Including, and this is always entertaining, a Gunner Commander in power armor.

It occurred to me that I should do something to break that bitches authority over her troops. Getting her out of the PA was easy enough (turns out the slut rides naked, heh) but that didn't seem enough. So I thought maybe I could rape her in front of her troops, let them see her powerless to resist. Except ... there's not really enough space there to get everyone gathered around to watch, and way too many holes to fall through. What I needed, I thought, was somewhere with a bit of space to set things up. Somewhere like Starlight Drive-In.

So that is where we went And then I started thinking about making a formal occasion of it.

Quite a bit of work later...

That's a basic 3x3 platform, with an orbital gallery for lightning and a secondary island off to the side where I can park some non-gunner slaves to keep them from getting in the way. Two rows of standing pillories keep the troops restrained and facing the center, where a conventional pillory has been set up.

It is here that we find the Gunner Commander. 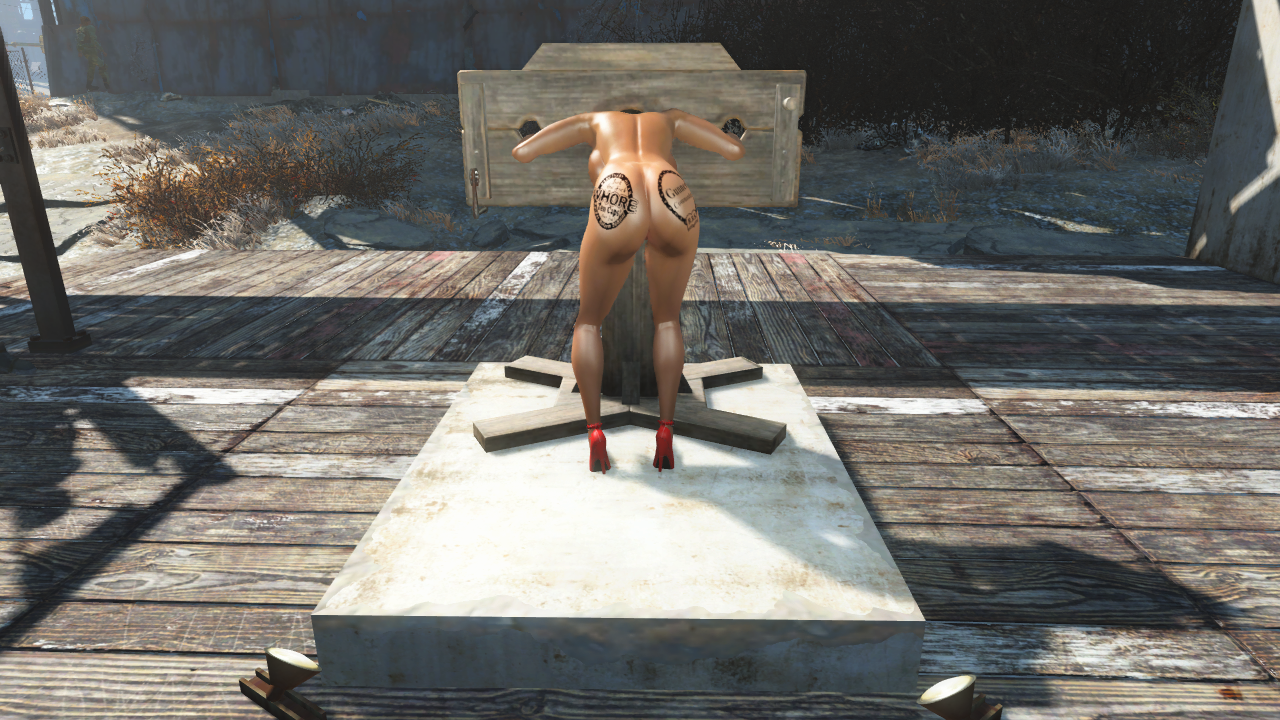 She's been stripped and branded, but is otherwise untouched at this point in time. She's branded as a Whore purely for the humiliation value. Which isn't to say I might not rent her out once I've had my way with her. 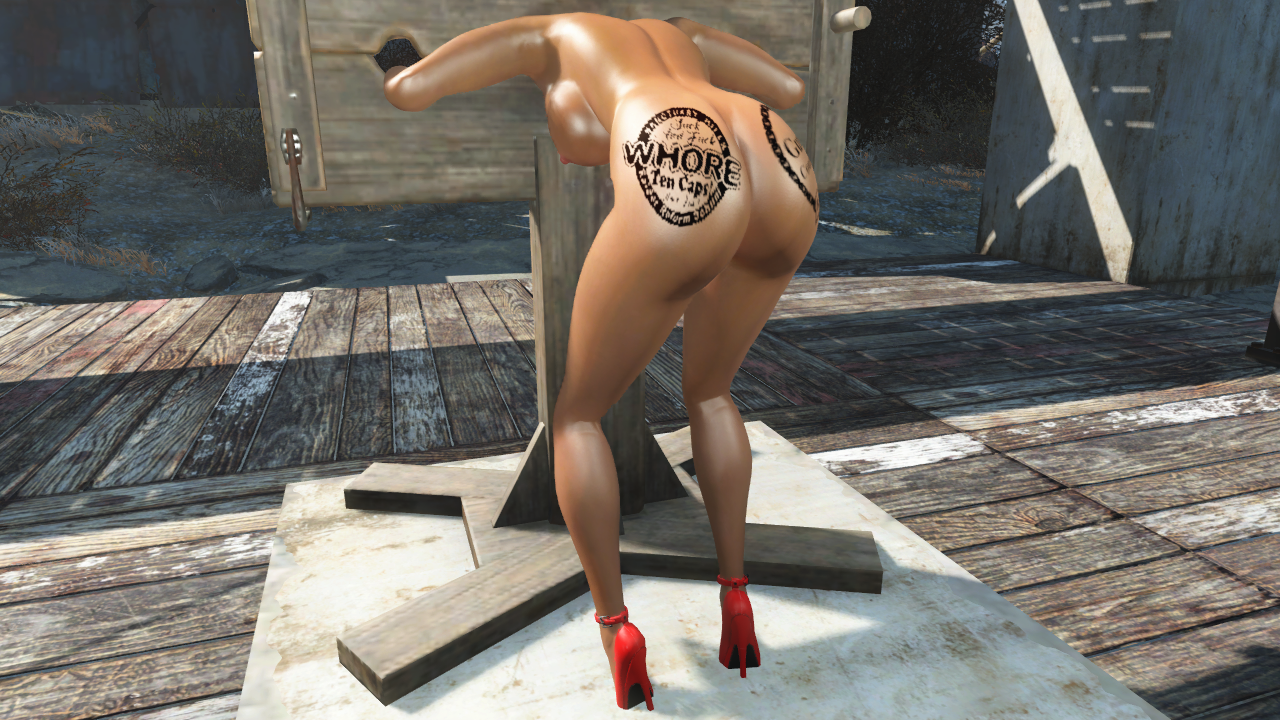 I don't have a name for her, so I've labelled her by her rank and affiliation. Just in case there was any question as to who was in the stockade. 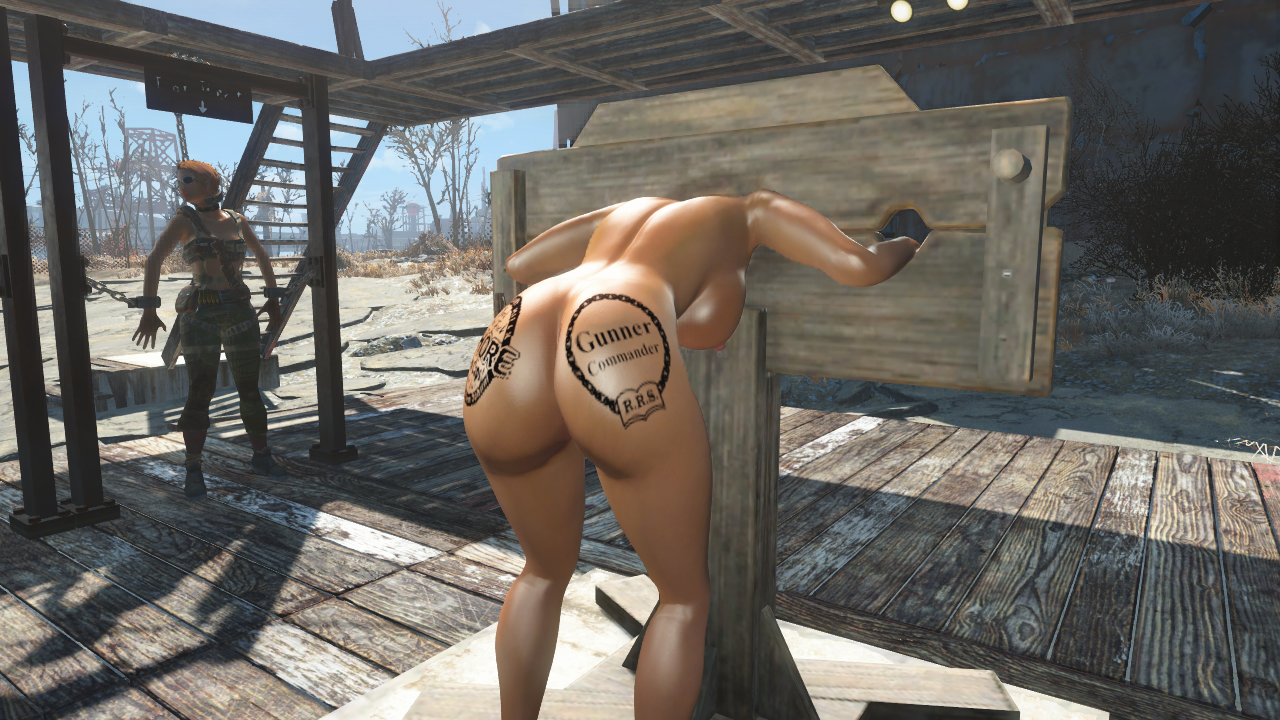 The troops themselves are restrained, but otherwise unmolested. I want them to watch what happens to their commander first, and then they can get their turn.

Off to the side, we have my backing group. Basically, I travel with four Institute coursers. One of them from Greentech, one from Tricondera, and a couple from PAM's variable elimination quests.  (All the coursers are female courtesy of the Femme Fatale mod). 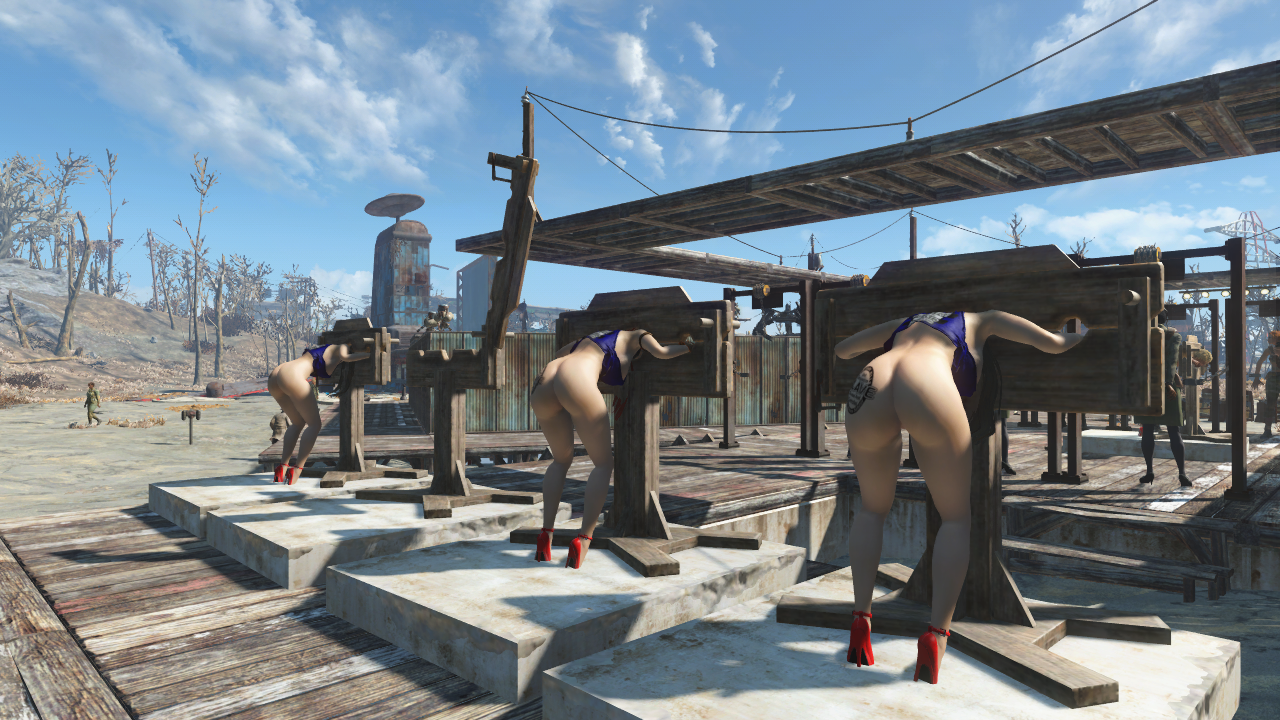 But as you can see, there's a problem. There's only three of them! 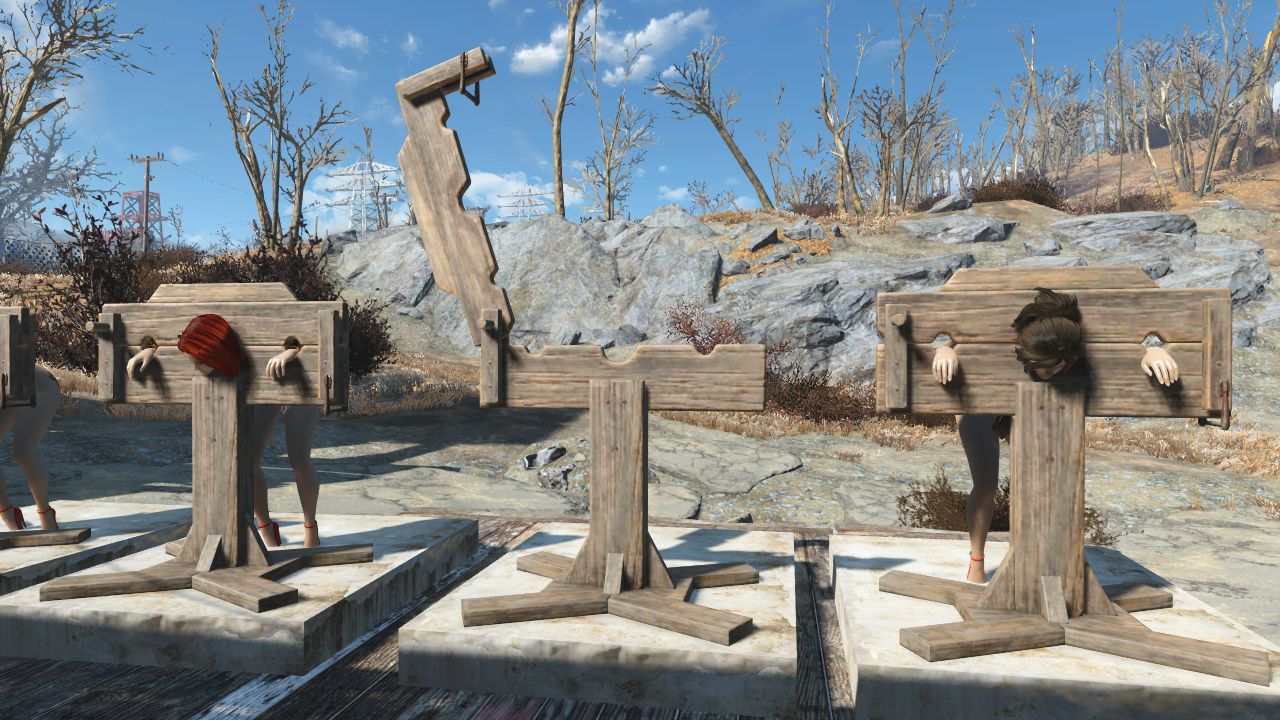 Problem is, when I started building, it was all a bit mad. There were slaves running all over the place, so the priority was to get them locked down so I could work on the infrastructure. And when I was trying to assign one of the coursers to a pillory, someone else jumped in front the cursor and stole the click. By the time I got that sorted out, the courser had run off somewhere. I'm not too worried - she's well trained by this point, so she'd probably just helping out with the farming (we have settlement of 30 inhabitants that was set up to feed 20, so there's some pressure there...)

But the courser isn't the only absentee. 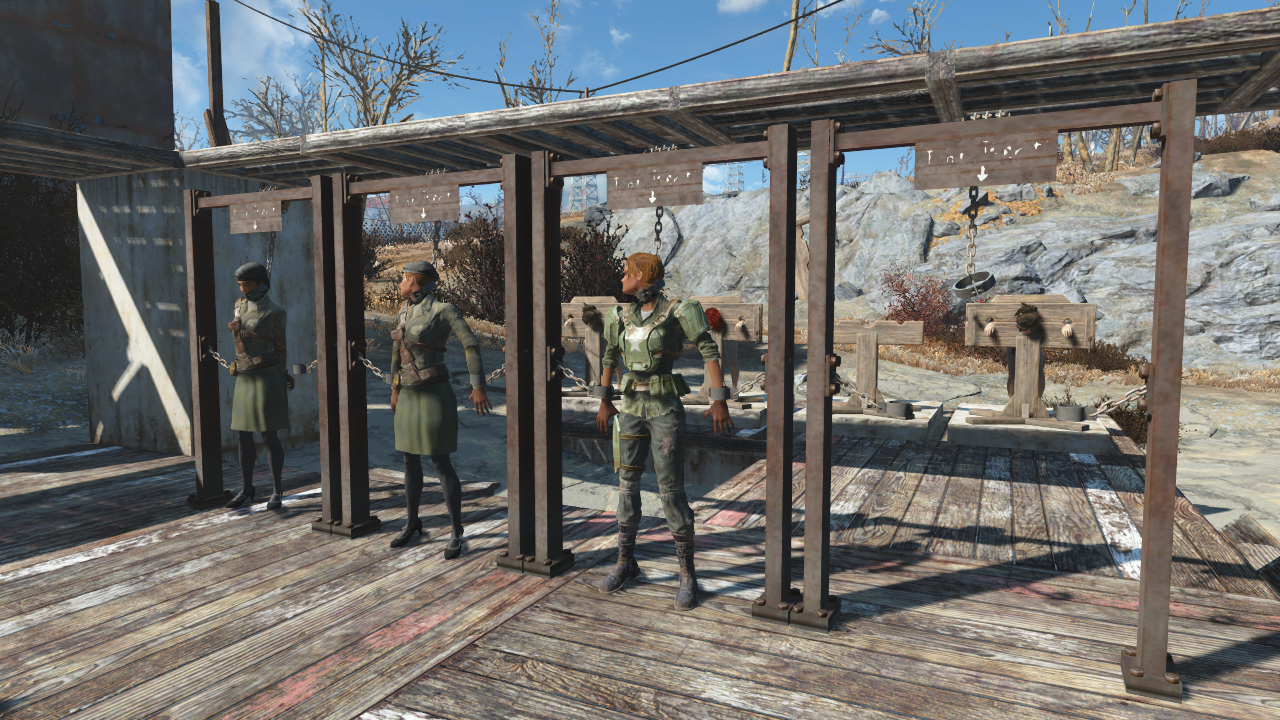 OK. I'm not too worried. I can always get more gunners to make up numbers if I have to. Coursers are harder to come by however: I'd like that one back if nothing else. So I run around the settlement a few times checking out the farms. Nothing. So I wait till nightfall and check out the sleeping bags. Still nothing. And slowly an awful suspicion dawns. In all that chaos, it would have been very easy to set someone's home to Sunshine Tidings instead of Starlight Drive-In.

Hell, the gunners aren't going anywhere. Maybe I should head over to Sunshine and see if I can find her there. If nothing else, it'll give the Commander time to enjoy the fresh air and sunshine.