“Sanuarach Mine, a hole in the ground just like any other,” Niyleen said as she made her way through the foggy cavern. Through her travels she’d hunkered down in caves and mines, but the ambiance of them never stood well with her. Kind of like Markarth only two things flowed in them but silver wasn't one of them. “Never understood how people could dig their lives away in these rocky abysses.” The thought of being an upstanding citizen chilled her, but she was more so frightened at the prospect of wasting her life trying to make a fortune with no discerning goal in sight.

She quickly came upon one of Atar’s men and decided to approach him. “We’re in control of this mine,” the Redguard mercenary said as she advanced. 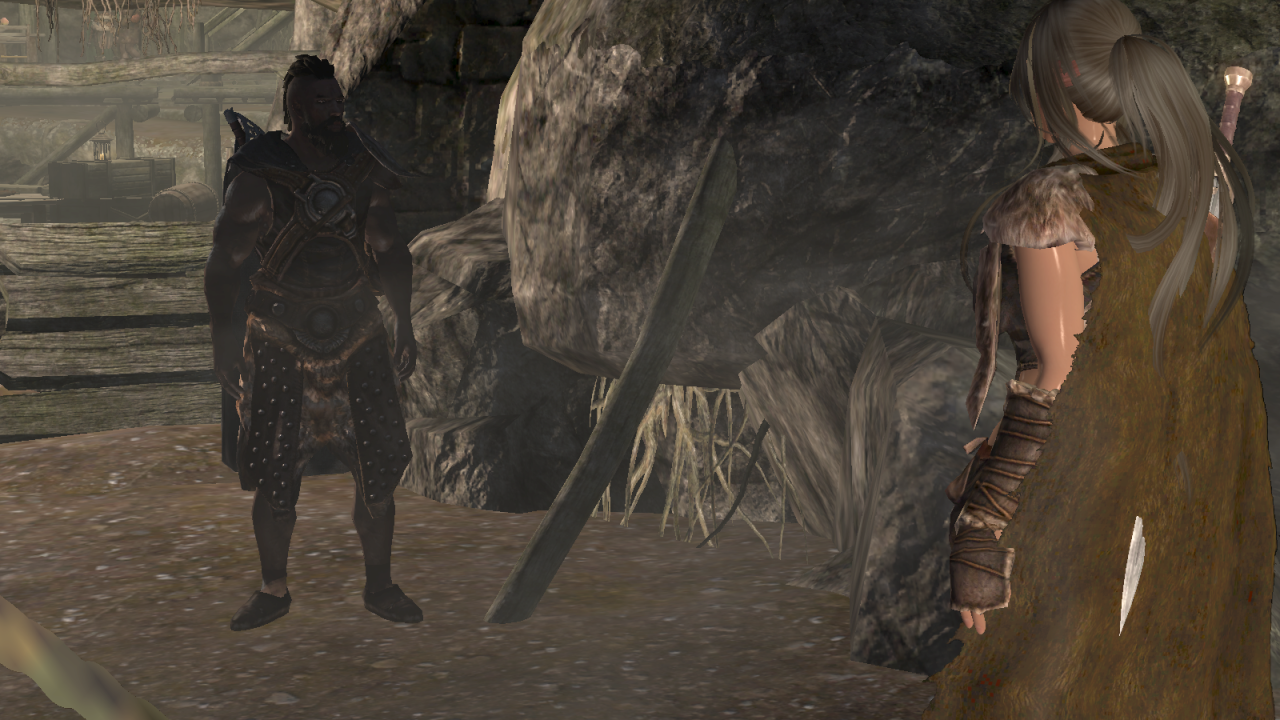 “Well spit it out sellsword. I haven’t got all evening,” Niyleen snapped. The look on the mercenary’s face said it all. (He’s looking at my breasts isn't he… for the love of Mara…) Niyleen had about enough of this. She drew her blade and got into an offensive stance. “Skeever breath, tell me where Atar is now before I chop that thing between your legs off!” 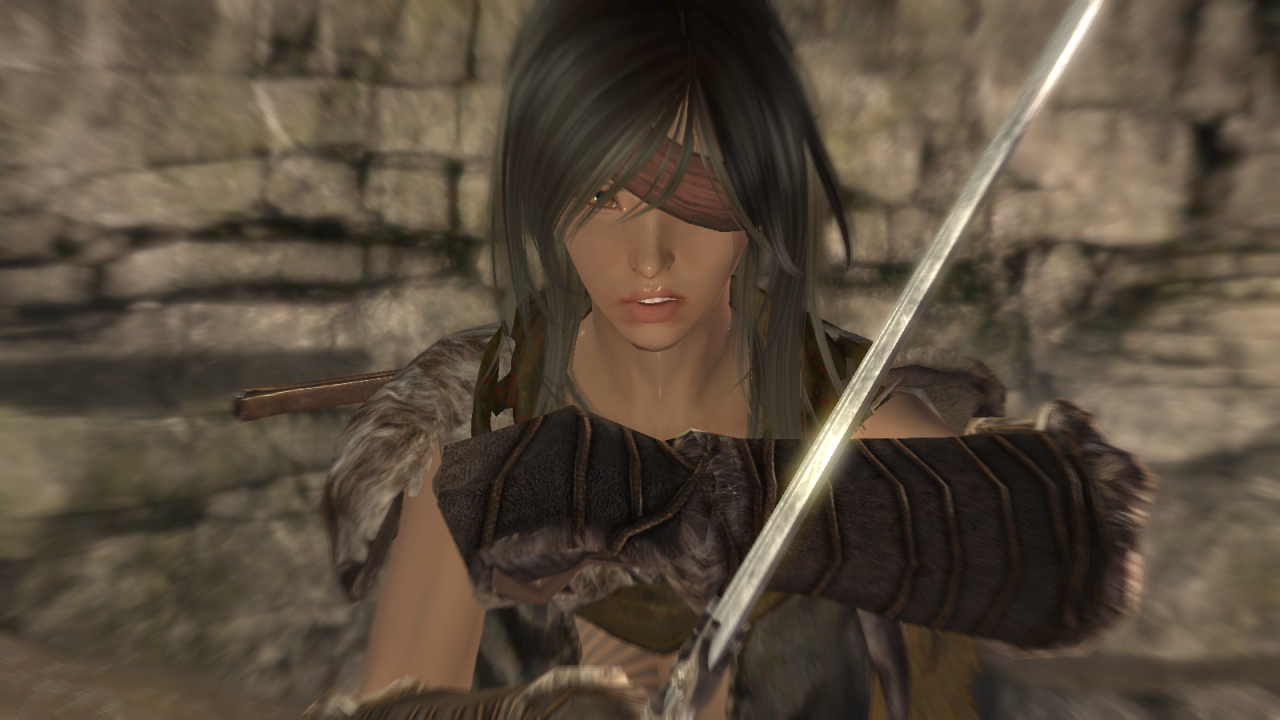 That certainly sobered up the Redguard who still wore a pleased expression on his face. “Calm down girl, and put that toy away before you hurt yourself.”

“Men…” Niyleen cursed under her breath.

“Anyway, the boss is a little further in. But don’t make any sudden movements. Wouldn't want to rough up a pretty face like yours.” Niyleen pushed past the Redguard and went further inside where she saw another Redguard and a familiar Nord standing around.

“The mine is closed. Get lost,” Atar said, his voice reverberating throughout the mine. “Is what I would say, but to think they sent a fair girl to do dealings with me. Backbiting Breton’s got no stones.”

(Keep it together Niyleen…) “Listen Atar, Ainethach and the other villagers don’t need or want you here so get lost." The mercenary leader looked down at her with cold eyes, “Who is it I speak to?”

“I've been sent by the Silver-Bloods to keep this mine safe,” he continued ignoring her interruption. “No selfish Breton or pretty lass is going to make me do otherwise." He gestured around himself. "Look around. I’m a sellsword girl and the men you see are around the mine are mine." “I don’t think you heard me the first time Nord,” Niyleen said her anger showing on her face. “The entire town wants you gone. So leave!” “No, I don’t think you heard me, Redguard,” Atar said, his eyes narrowing. “I’m here because of the generosity of the Silver-Bloods—the most important people in all of the Reach—to clean and clear the area of all Forsworn. Ainethach, that ungrateful Breton, doesn't want to pay for this service.”

“You want the man to give up his land!” Niyleen shouted.

“It’s not like he still won’t make money, the majority of the profits will just go to my contacts.” 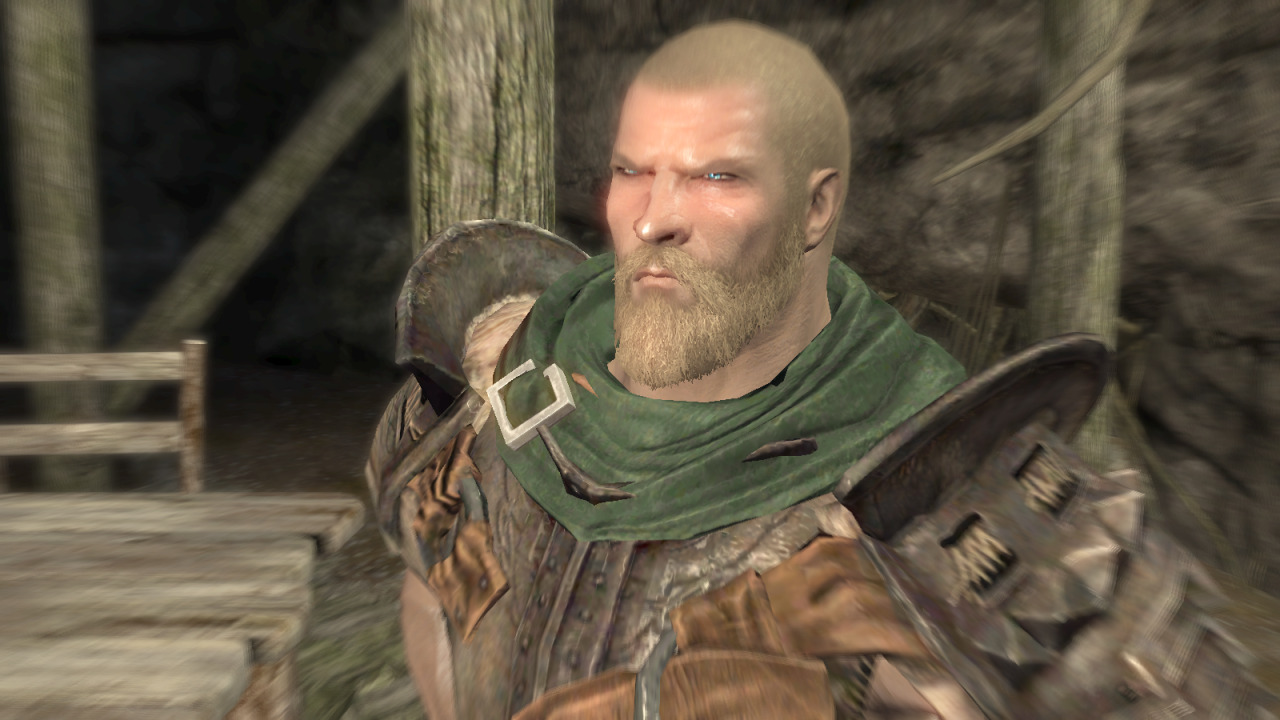 Niyleen was about to make a comeback when she remembered that she had said the exact same thing to Ainethach earlier. “Why not just sell? I mean some pay is better than no pay, right?” She clinched her fists and began trembling out of anger.

“Now then girl, now that that matter’s handled,” he looked over toward his subordinate and nodded. “Give me a reason not to plunge a dagger in your chest.” “To think I’d get so wound up about someone else's coin,” Niyleen laughed.

“Nothing, just thing about how I’m going to enjoy ripping you and your men apart one after another.”

Atar grunted. “And here I thought today was going to be boring,” he motioned at his subordinate. “Breroc, she’s yours.” 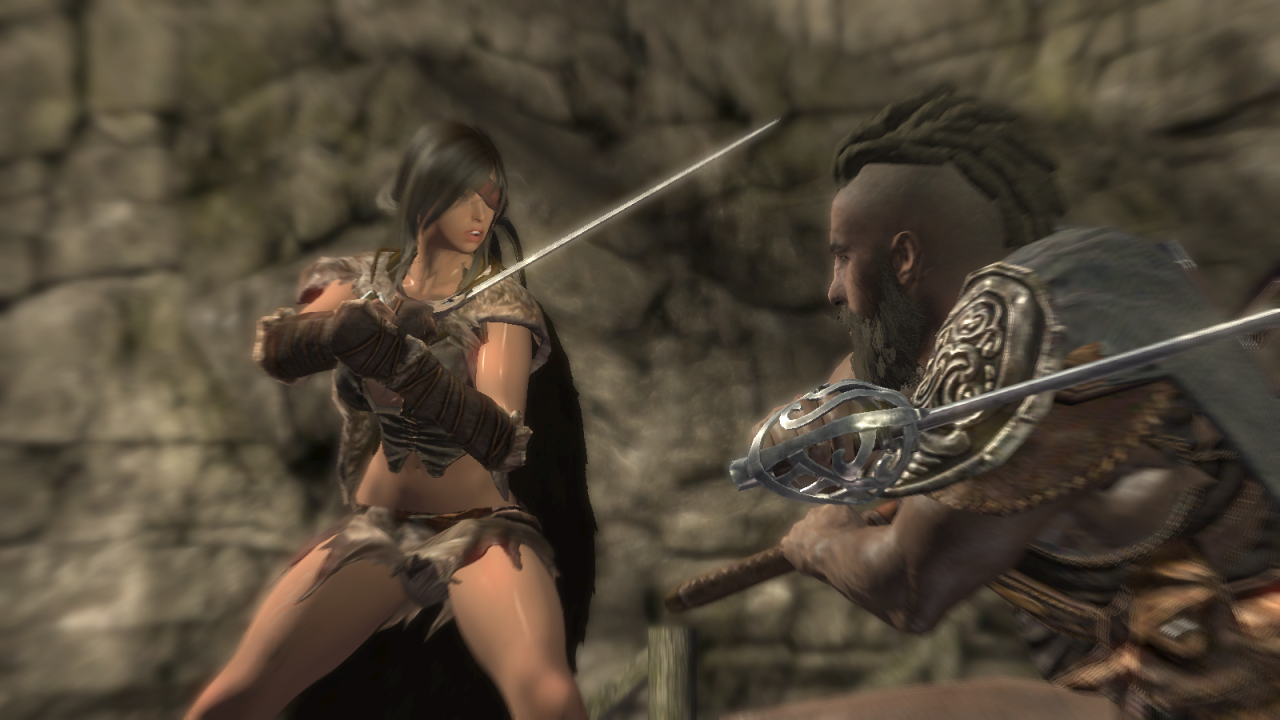 The Redguard rushed at her with blade and ax in hand trying to overpower her with his flurry of offense. But Niyleen parried his strikes and quickly countered by severing his left arm and burying her blade through his chest. Hearing footsteps quickly closing in behind her, Niyleen turned and delivered a powerful swing which found its way to the neck of another mercenary killing him instantly. 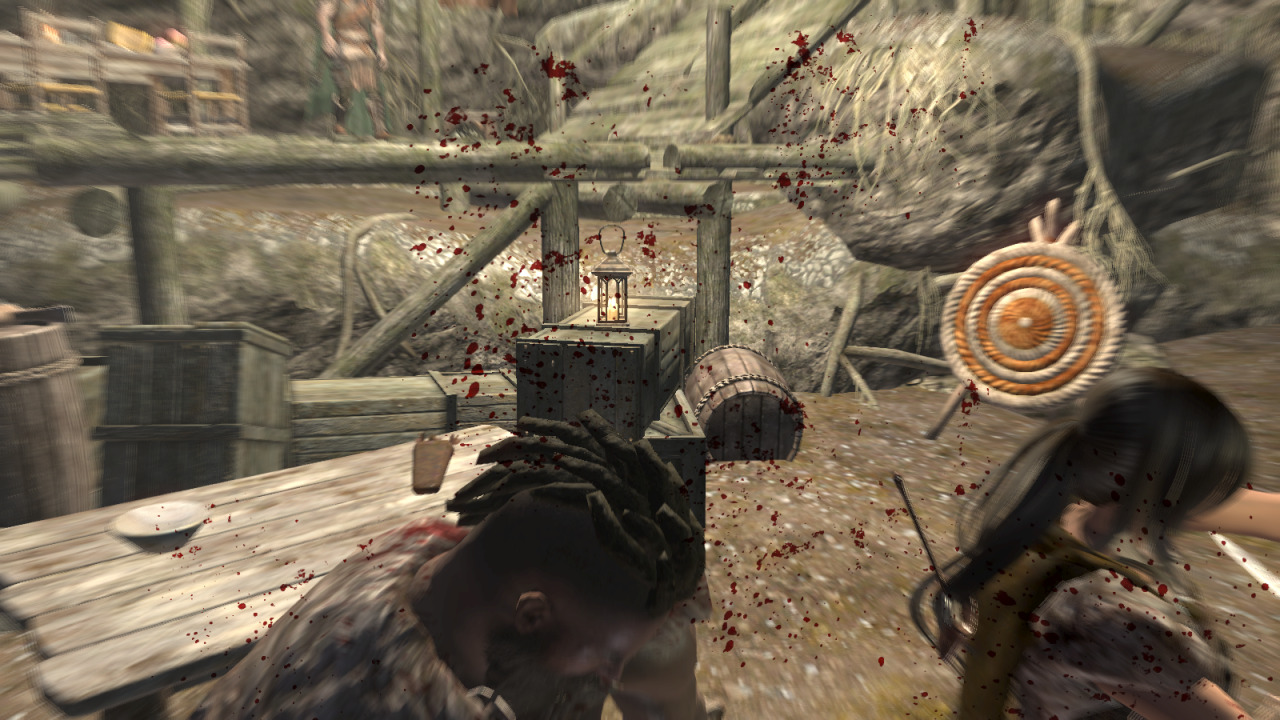 With the blood of two foes on her hands Niyleen began to feel alive again. Sure she had already killed today, but that was out of betrayal, this was another beast altogether. It was raw violence for the sake of violence. She could have persuaded Atar, solved this peacefully but she didn't and now she couldn't contain her pleasure. “What’s so funny girl,” Atar said. His mouth formed in a nasty snarl.

“It’s just been so long,” Niyleen said erotically. She ripped the blindfold from over her eye and flashed Atar a smile. 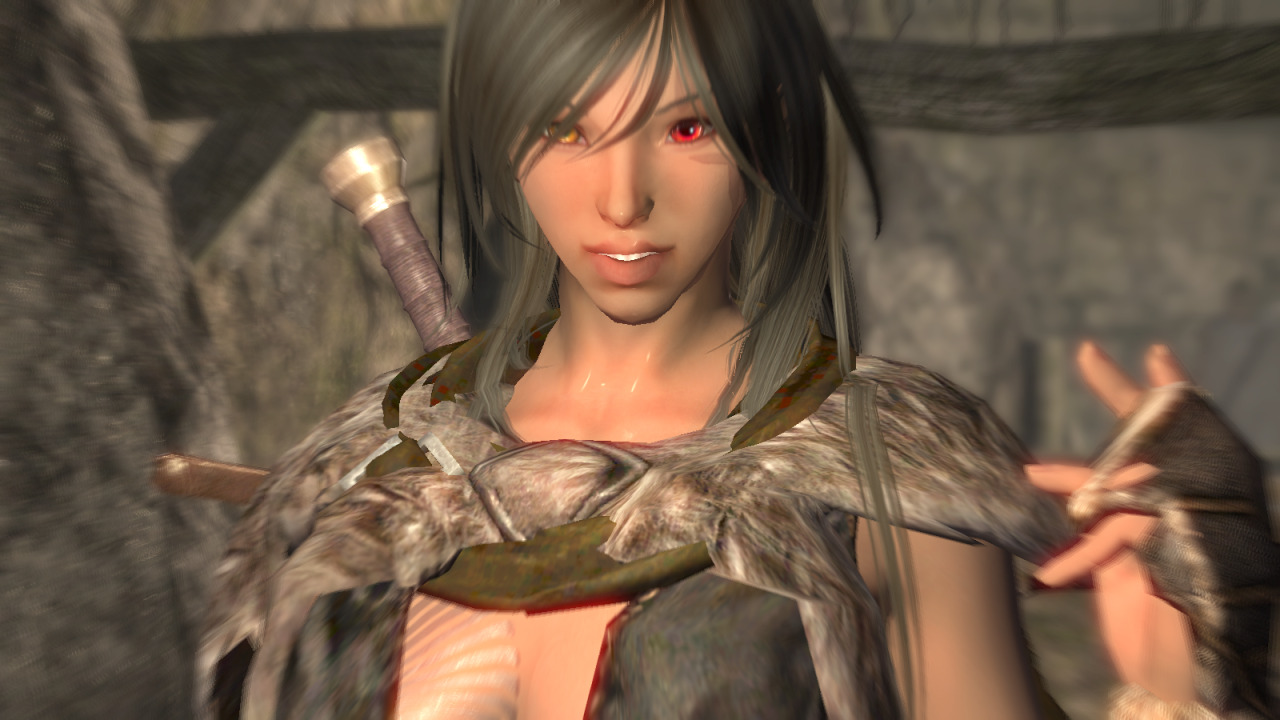 Niyleen could see the cogs in Atar’s brain working furiously to remember where he knew her description from and decided to fill in the blanks for him. “Let me give you a hint,” she said. Her body was heating up with every word. “Five years ago, the Karth River. The flames of floating on its surface could be seen from every point of the Reach.”

Niyleen could neither hear Atar nor contain the heat in her body anymore, and true to her moniker she released the heat and was engulfed in flames. The heat of the blaze soothed her, calmed her, quelled her fury and purged the heat within. She felt reborn like the phoenix, but there was still one thing keeping her from feeling whole. 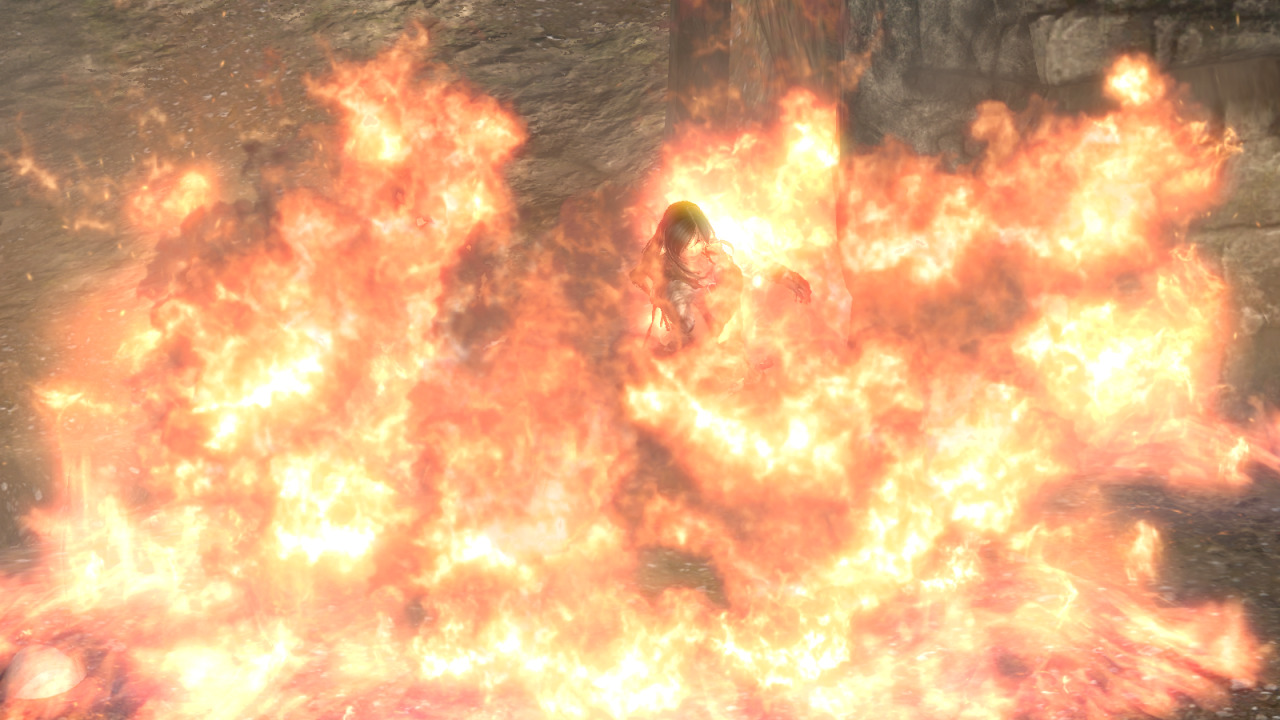 She glanced over towards Atar and even he could see the wicked smile she had on her face as she stood poised ready to strike. It was over in an instant, as she swift separated Atar from his head. Shock. Awe. Ecstasy. Niyleen had never taken skooma, but this is what she imagined it to feel like. She felt invincible, unstoppable, and alive. Her power kept surging, building up, making these emotions ooze through her. “All this debate about whether or not Talos is a god, I should be called the Ninth Divine!” As a devout follower of Julianos, Niyleen knew that it was the power talking, but the idea of being as powerful as an Aedra or even a Daedra was… alluring. 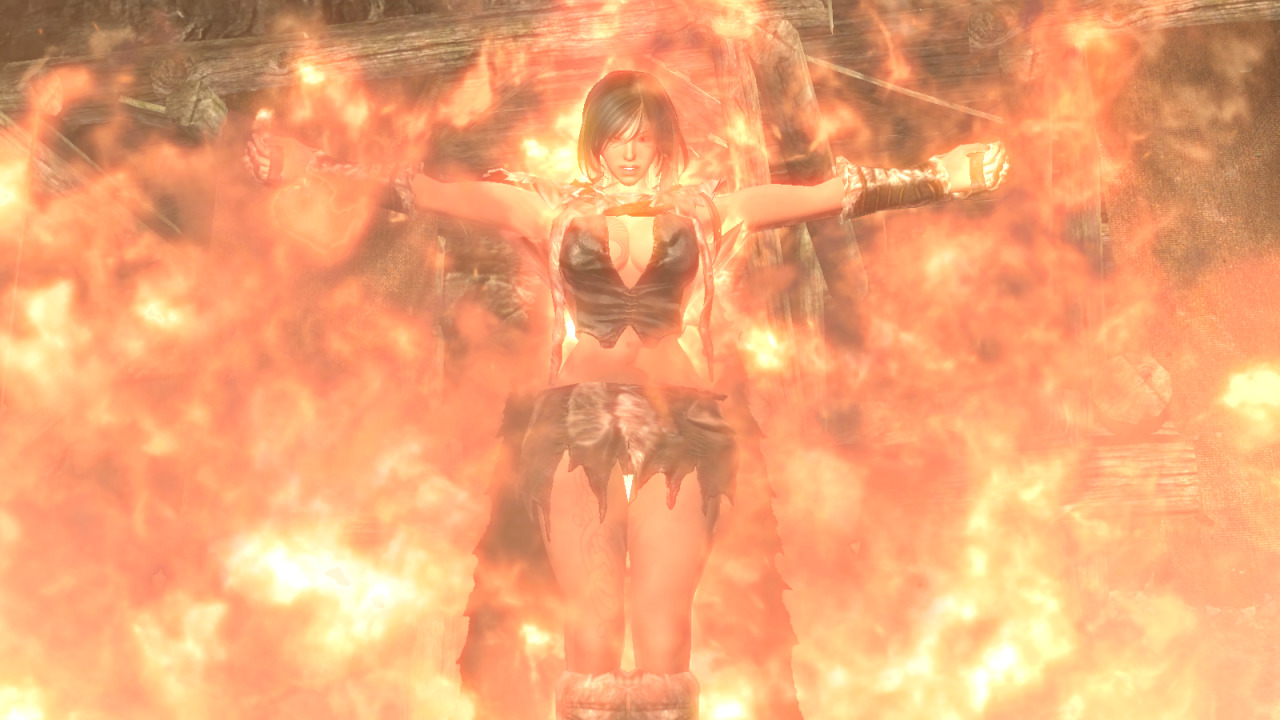 “With this power, even if I’m not a god I could—!!” Something was wrong. The heat inside her was getting too hot, the flames were burning too bright, her power was destroying her. She let out a sidesplitting screech as the flames began to tear away at her skin. 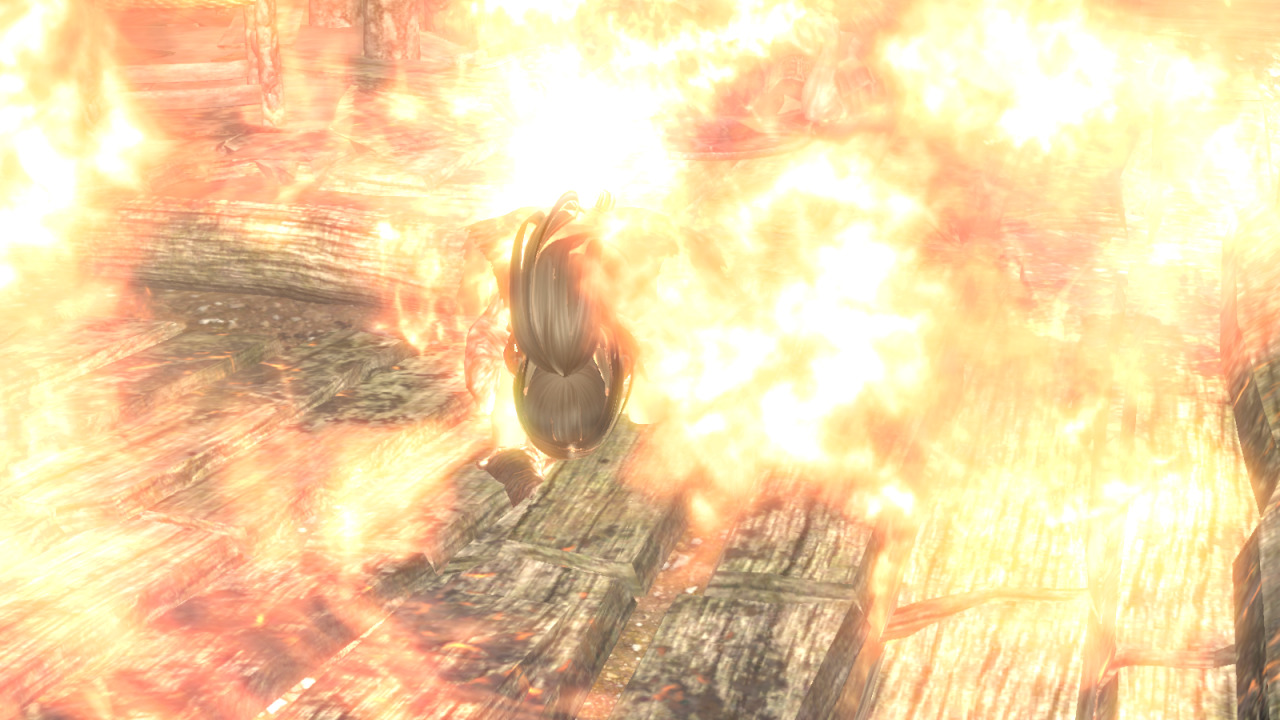 Niyleen tried to contain the power but to no avail. The pain was unbearable, she couldn't concentrate; it wasn't too long before she blacked out from it all. 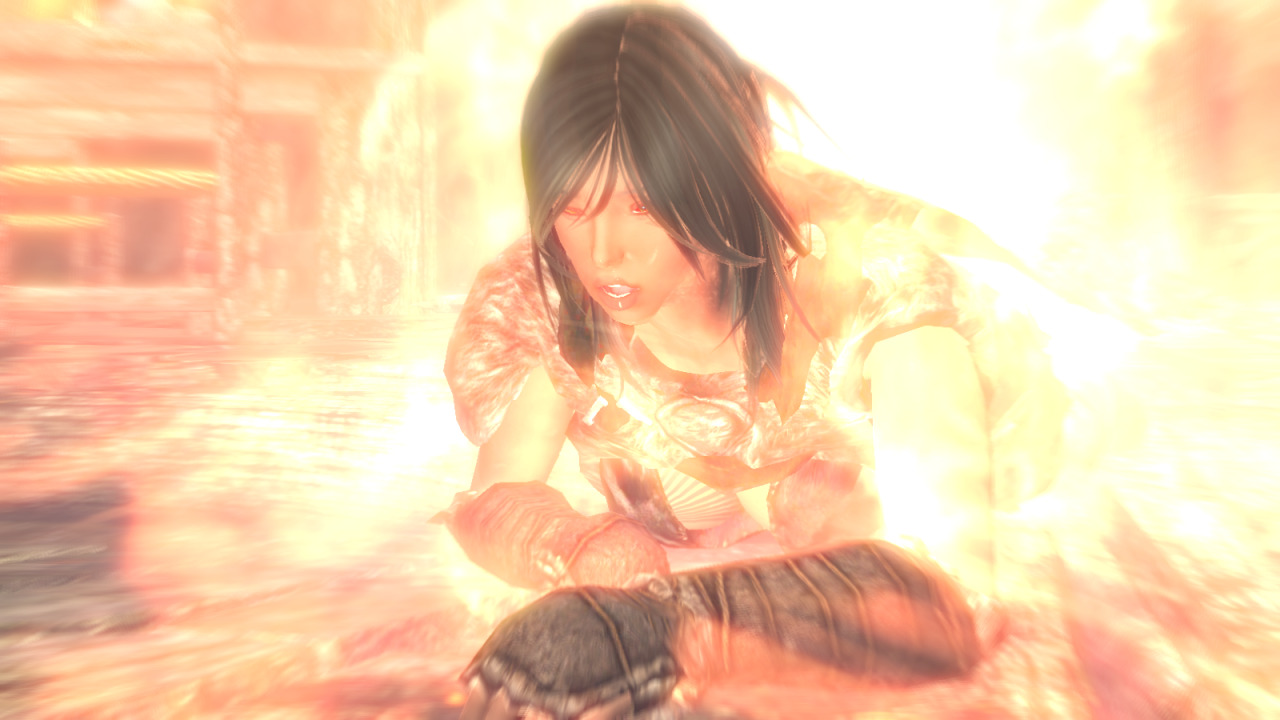