A returning soldier took a whiff in of the air and let out a content sigh. “Understone Keep. So stuffy, so chilly… I’m home.” 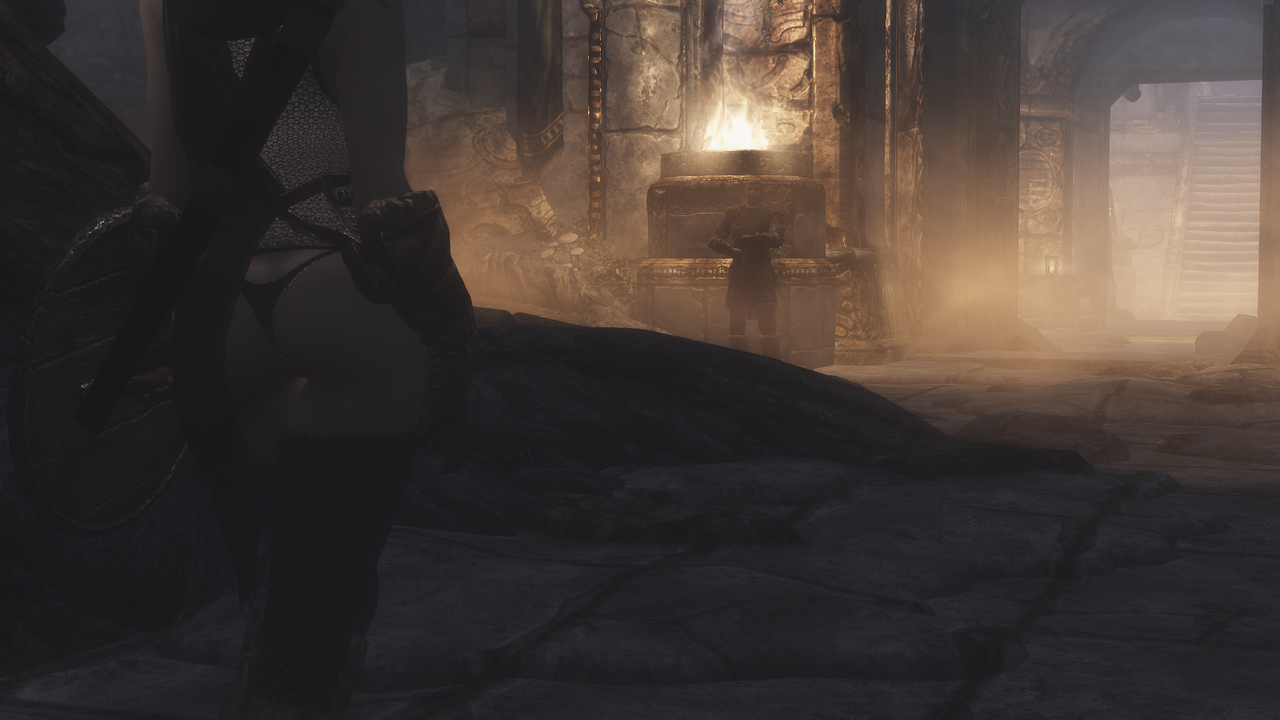 The returning soldier walked onward and was met by a guard. “Welcome back ma’am.” He saluted. “Hope you had a safe trip.” 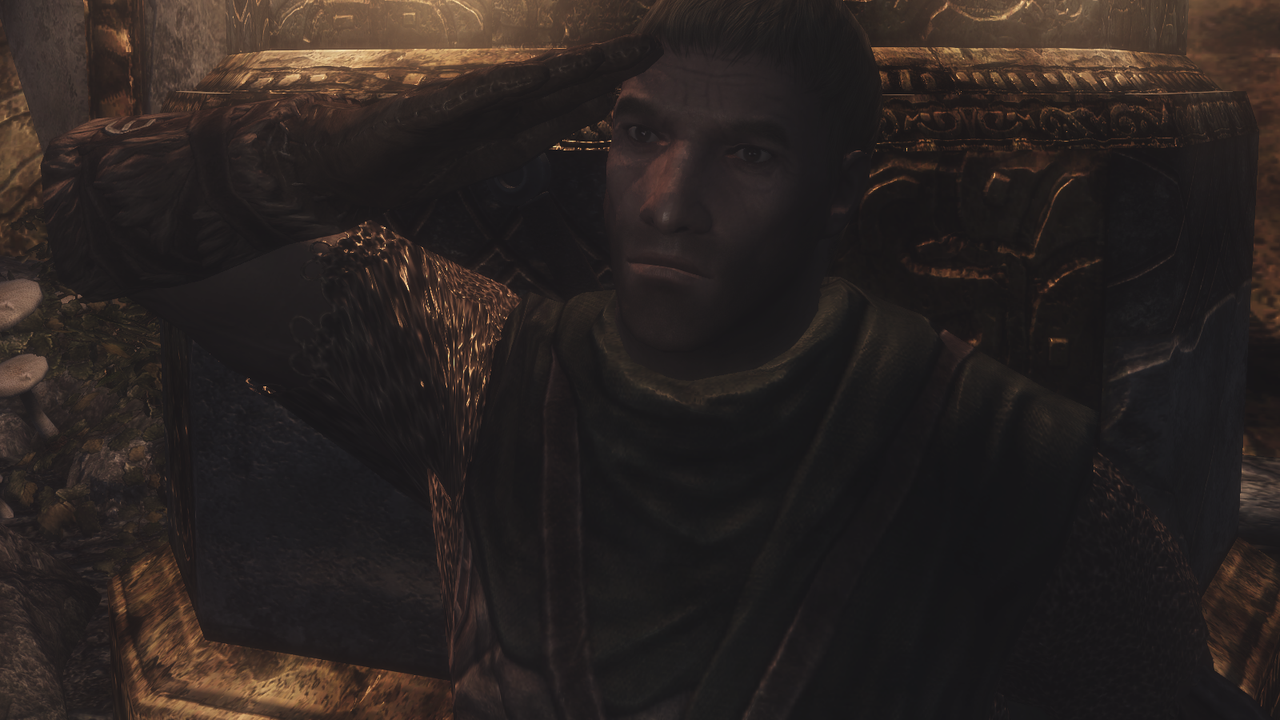 The soldier saluted as well. “It could have been better, but I’m alive and I’m not complaining.”

“Understandable. The Jarl will want to see you.” 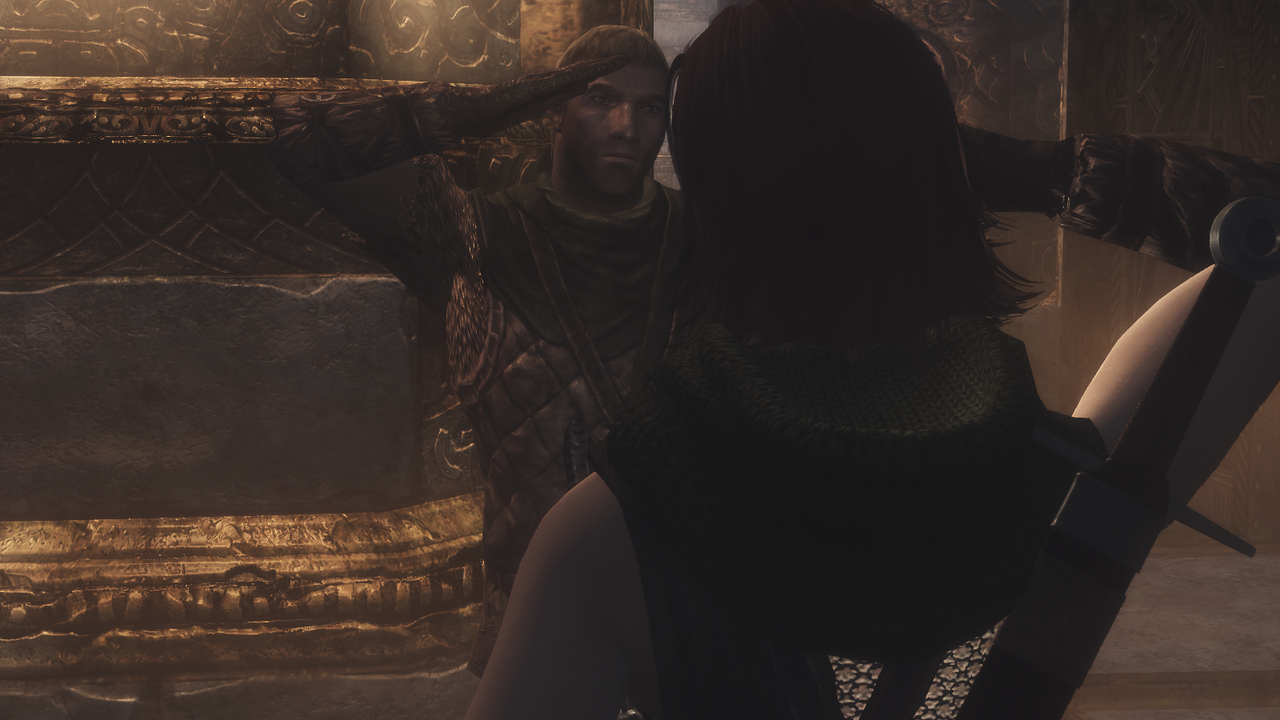 The soldier headed toward the throne room but was cut-off by another guard. “Lady One-Eye! Glad to see you back in one piece ma’am.” The girl saluted stared attentively at the soldier. 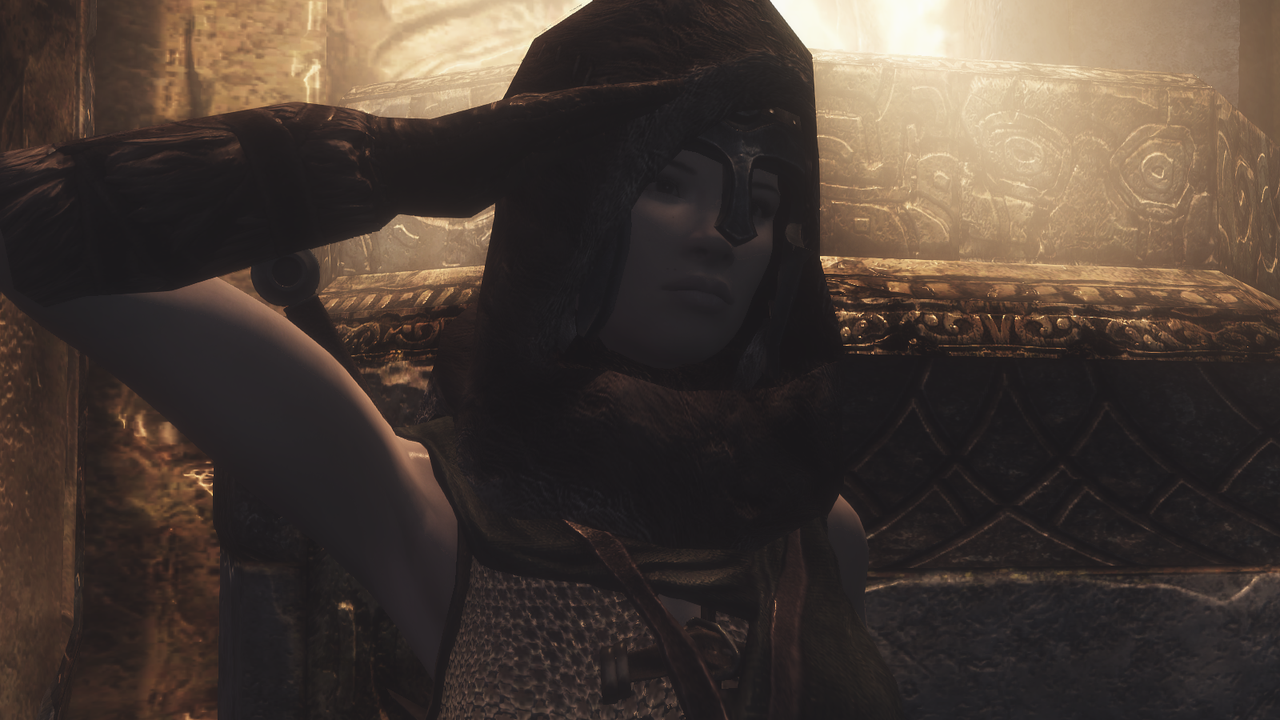 The soldier called One-Eye leaned in closer and motioned the guard to do the same. “Whiterun was attacked.”

“Actually I’m not sure about that.” One-Eye said scratching her head. “Actually only a tower outside of Whiterun was attacked, and the area around that seemed to have been razed by fire.” She shivered. “Powerful magicks were at work there.”

The soldier shook her head. “No. I don’t know. But whatever it was, it wasn’t human. And from what I’ve been hearing from rumors around the Whiterun-Riverwood area, if they are true, then this Civil War will be the least of our worries.” Seeing the guard’s face flush, the soldier patted her on the shoulder. “But no worries, as long as we do our jobs there is nothing that can possibly breach Markarth’s walls.” She saluted and gave the girl a nod before continuing. 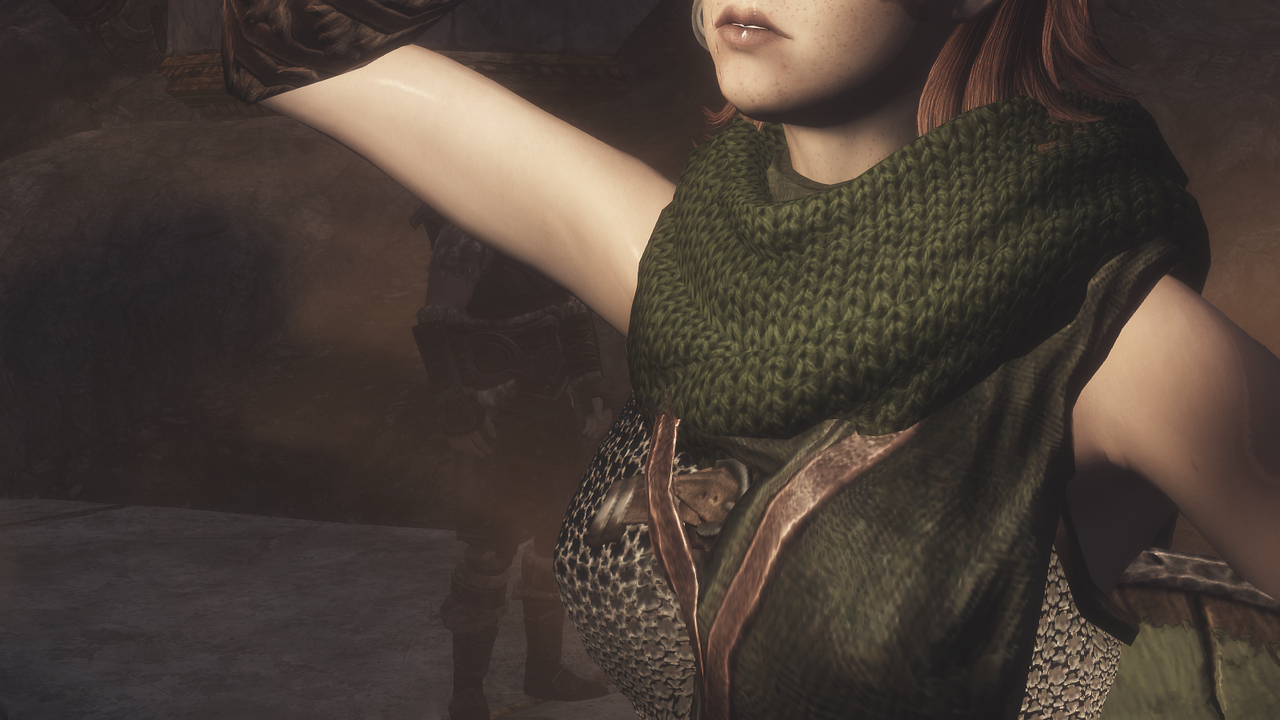 Heading further in, One-Eye could see the Mournful throne and her heart skipped a beat. (Igmund… my love…) She shook the thought from her head and continued walking. Her duty as a soldier and as a citizen of Markarth was to report her findings, and in her heart One-Eye knew this. Any feelings beyond this would have to be dealt with at a later time. 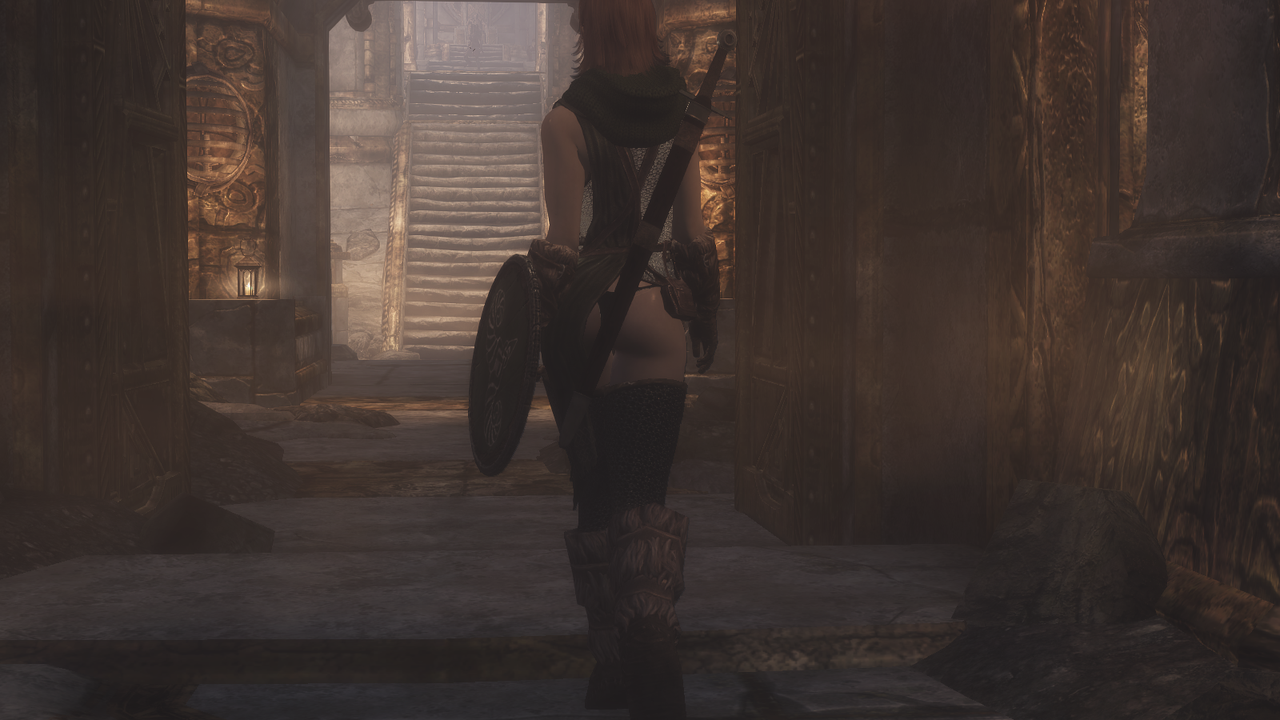 Just outside of the throne room the two guards posted were about to salute when One-Eye waved them off. “No time for pleasantries I need to speak to the Jarl at once."

The guards on duty simply nodded and allowed her access. 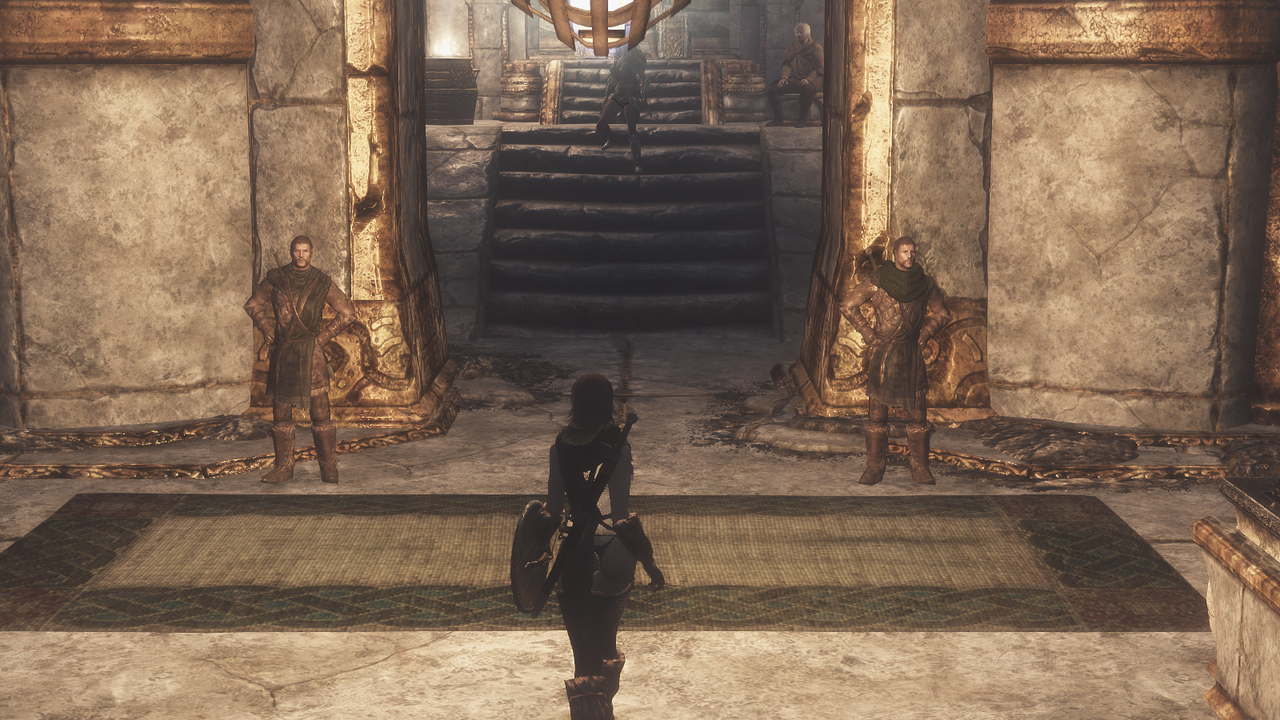 As soon as she entered the throne room a loud voice shouted, “Halt! Who dares approach… Heilda!”

“I’m glad to see you as well, Faleen,” the soldier said, smiling. “What’s with the hair? One of the Jarl’s requests?”

Faleen smiled. “Indeed. I lost a bet, and this is the result. But enough dilly-dallying. Please, approach the Mournful Throne.” 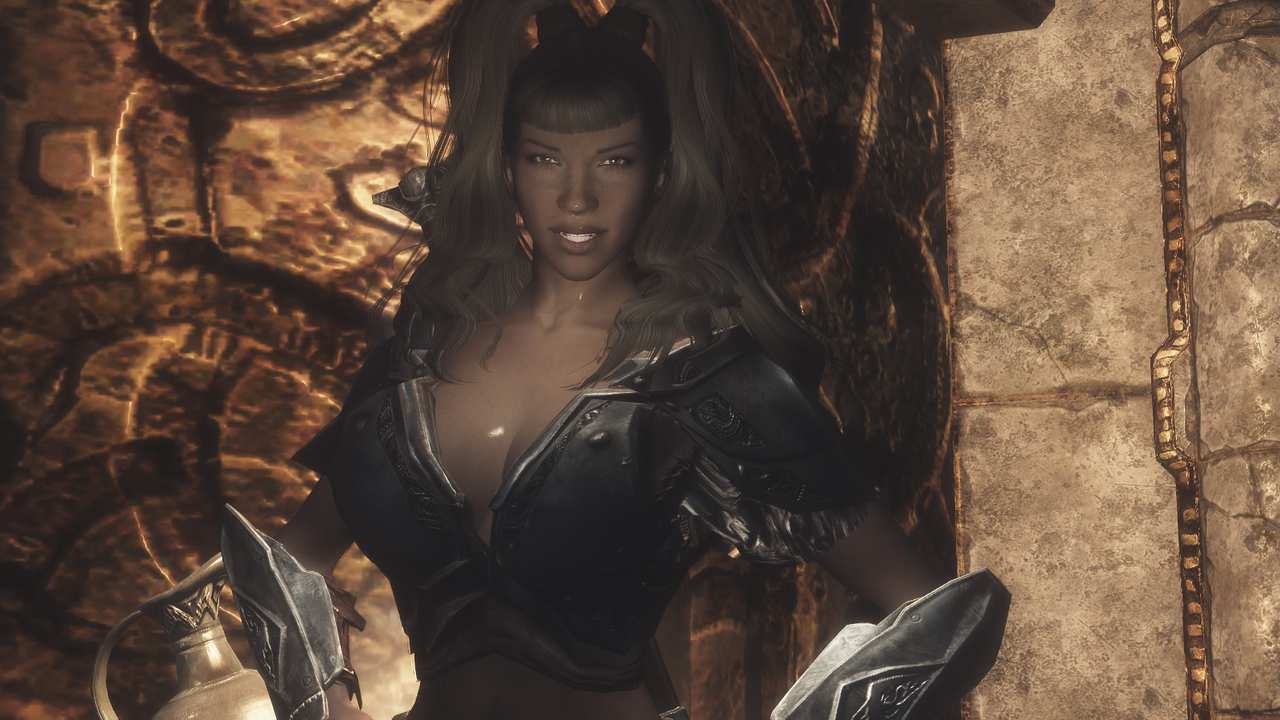 Heilda ascended the stairs toward the throne and stopped just short of it.

She immediately took to a knee. “That I have, and with grave news.” 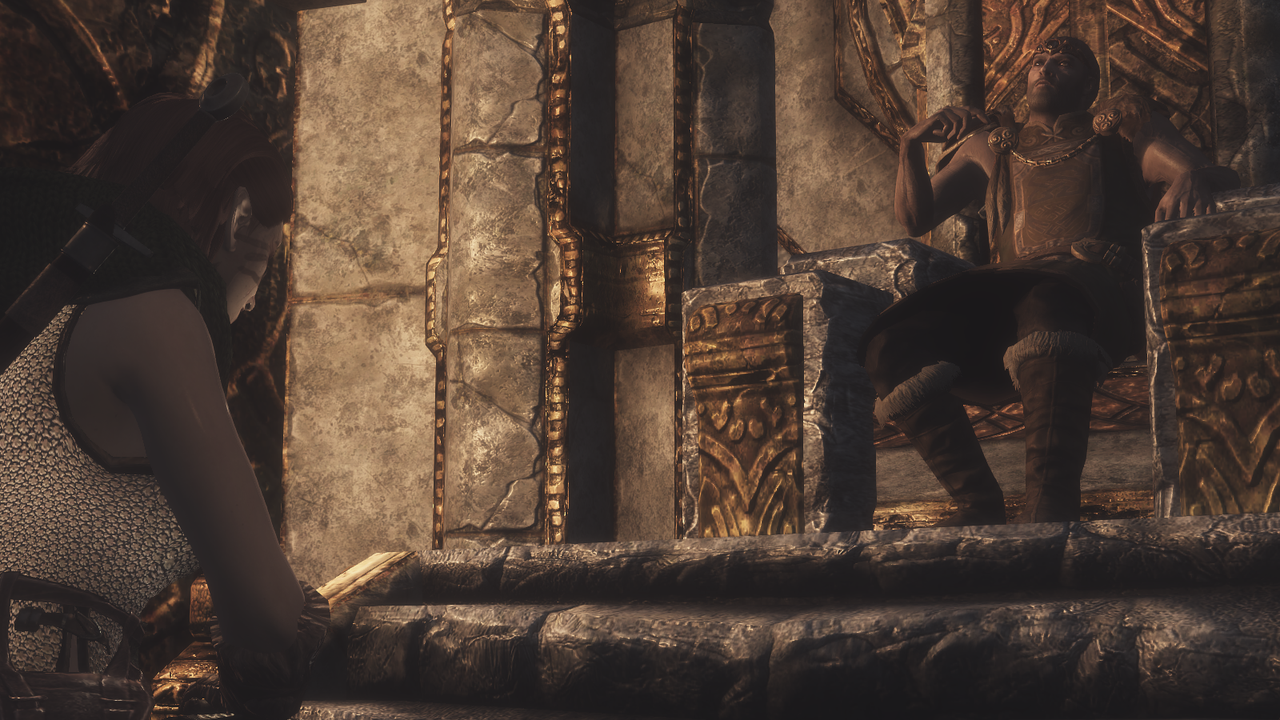 “My lord, Whiterun was attacked.”

“By the Stormcloaks?” Igmund said. “Damn Ulfric and his men to Oblivion.”

“No My Jarl, it was not the work of Ulfric’s men.”

“Then by who? Quick now, hurry and tell me girl!”

Heilda swallowed hard, realizing how foolish her next words were about to sound. “I believe, My Jarl, and I say this with full confidence, that Whiterun was attacked by a dragon.”

Silence fell over the throne room, everyone too stunned to say anything… that is until Igmund let out a laugh. “Dragons? In Skyrim? Ha!” He rolled his eyes. “This is all probably some ruse that Balgruuf, in his pacifist ways, is trying to put this war to a halt.” 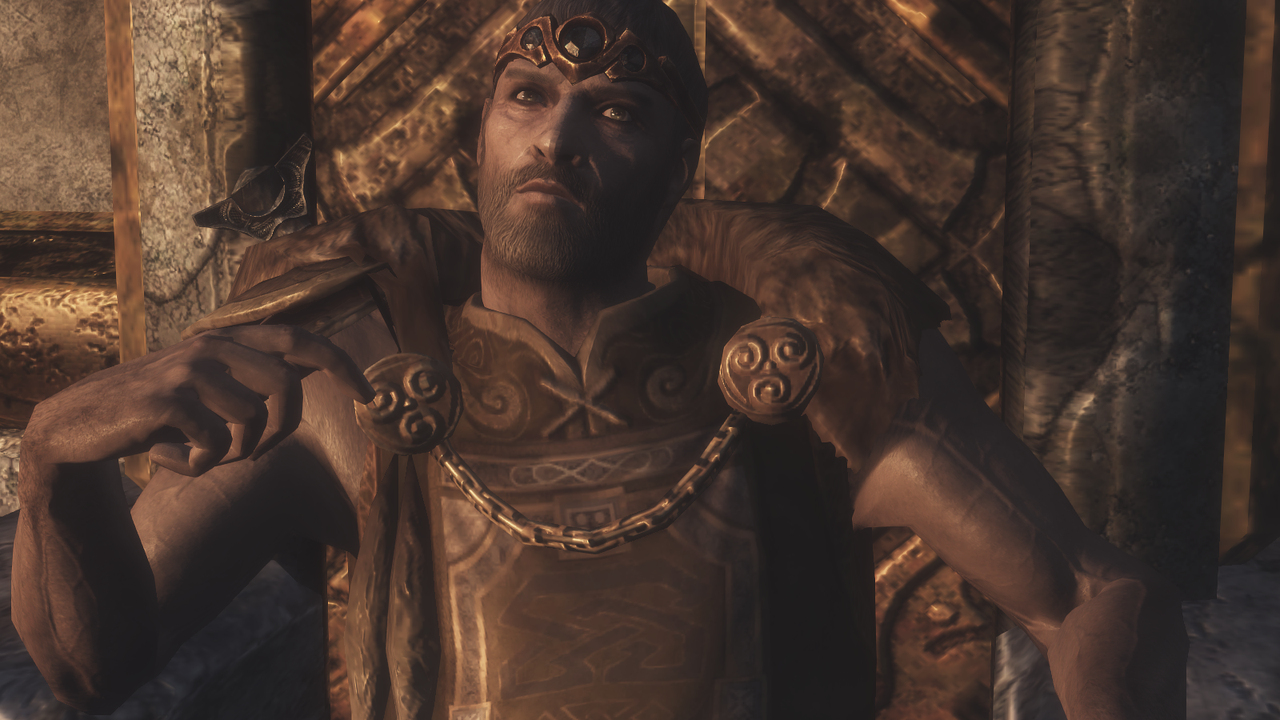 “Enough with the jokes One-Eye and give me your report,” Igmund said.

Heilda simply looked at the Jarl, which prompted his steward to act.

“Igmund, please at least entertain the girl’s words. I would not believe that one of your best soldiers would lie to you outright like this.”

“But dragons? Really Raerek? Do you really believe that those creatures from legend have returned to Nirn? Do you know what that would mean?”

“Aye I do,” Raerek said. “And that is precisely why we shouldn’t wave off the girl’s words. Divines pray that she is mistaken.” 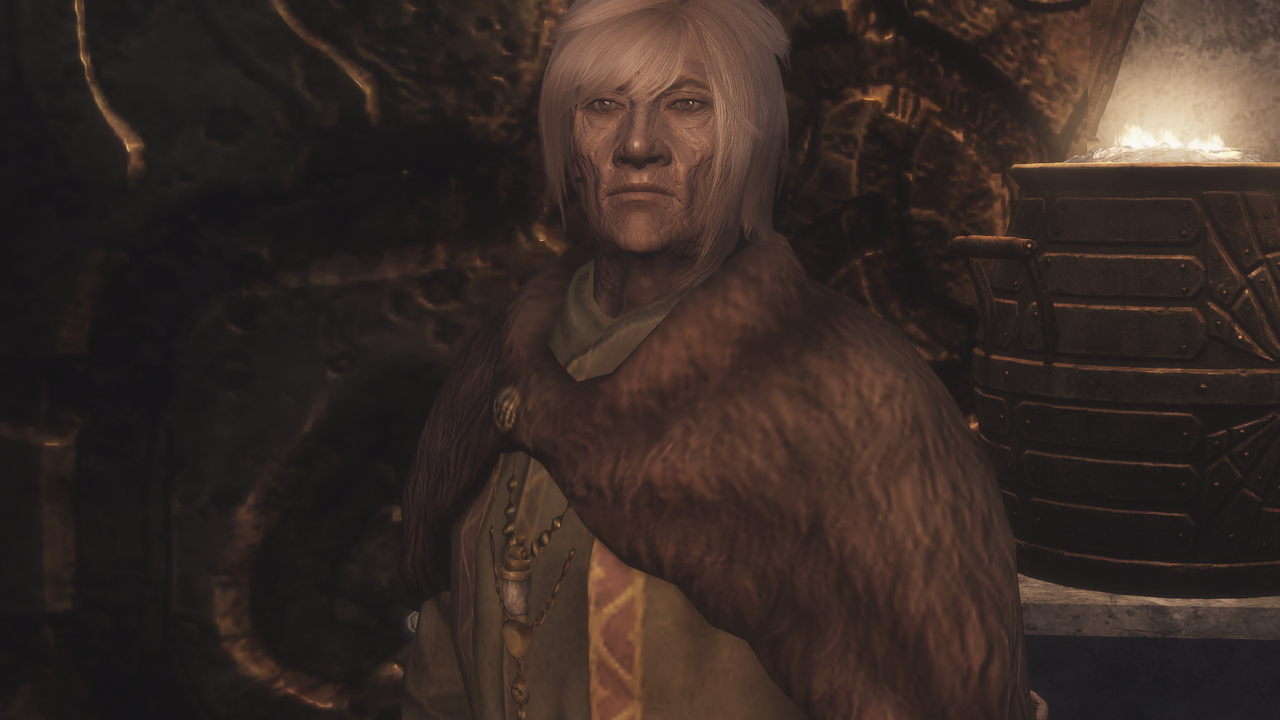 Raerek turned to the soldier and said with a grave look on his face, “Heilda One-Eye, child of Markarth, warrior of the Reach, is the information that you delivered hear today indeed true?”

Igmund looked from Raerek to Heilda both who seemed to be expecting something from him. “Dammit,” he finally said. “If the dragons have returned, then we must send word to General Tullius. Now’s not the time for Skyrim to be fighting amongst itself.”

“I will get right to it,” Raerek said.

Igmund nodded then looked at Heilda. “You’ve done Markarth, no, all of Skyrim a great service this day. Well done.” He looked around like he was contemplating something then nodded. “No longer will you be known by your failure, One-Eye. Go onward from this day forth and be known as Oath-Keeper.”

“I think it suits you,” Faleen said, happily.

(As do I.) “It is an honor, My Jarl,” Heilda said, not able to mask the happiness from her face. 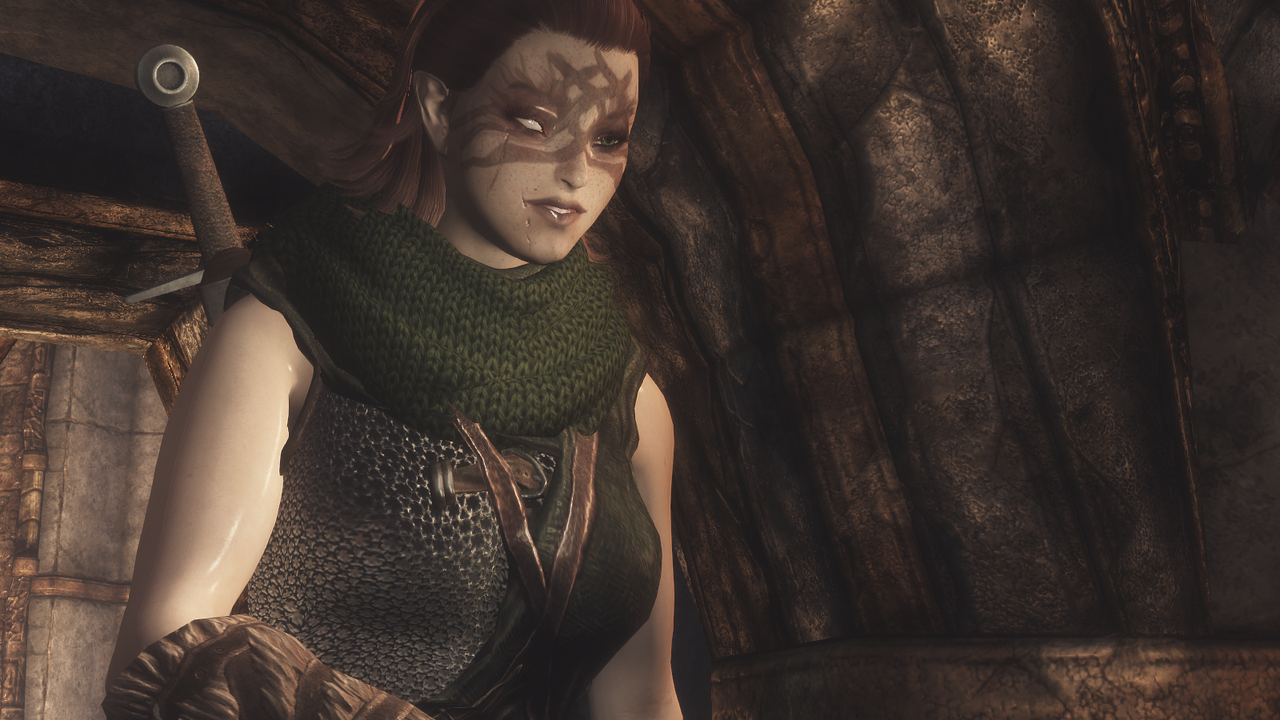 Igmund sat back on his throne and sighed. “Now then, it there anything else you have to report?”

“Aye, My Jarl. Apparently when they were dealing with the dragon—”

“I need to see the Jarl! It is very very important that I talk to him!”

“We’ll decide whether or not what you have to say is important or not,” said one of the guards posted outside of the throne room.

“Would you like me to handle this, My Jarl?” Heilda said.

Igmund slammed his fist on this throne. “No… I will do this myself.”

“As you wish.” Heilda rose, descended the steps and posted up on a wall.

Igmund took a deep breath. “GIRL, I SHALL GRANT YOU AN AUDIENCE!” His voice resounded throughout the keep. 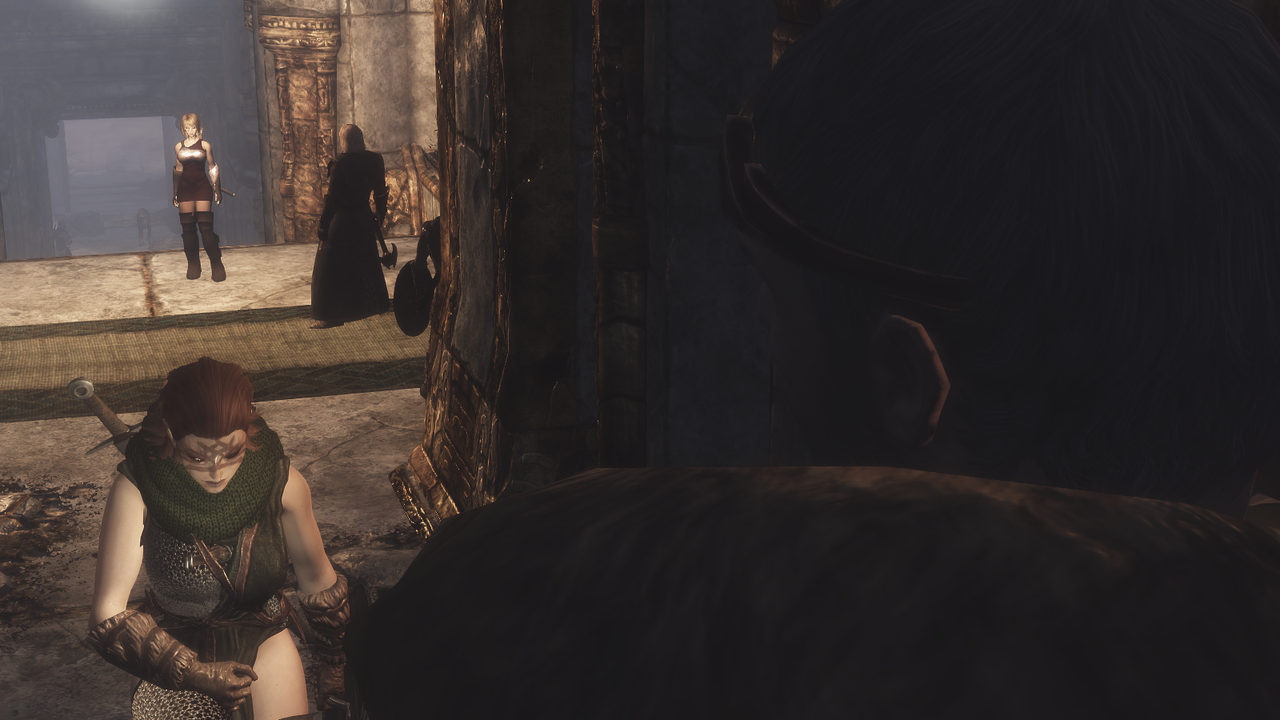 The intruder eagerly made her way into the throne room. “Thank you so much, your excellency. I was afraid that—”

“Who do you think you are to approach the Mournful Throne so flippantly,” Faleen said, scowling. “You are out of your element Nord. The Jarl may have granted you an audience, but I suggest you leave.”

“But I have news regarding—!!” Faleen’s cold stare stopped the girl short. 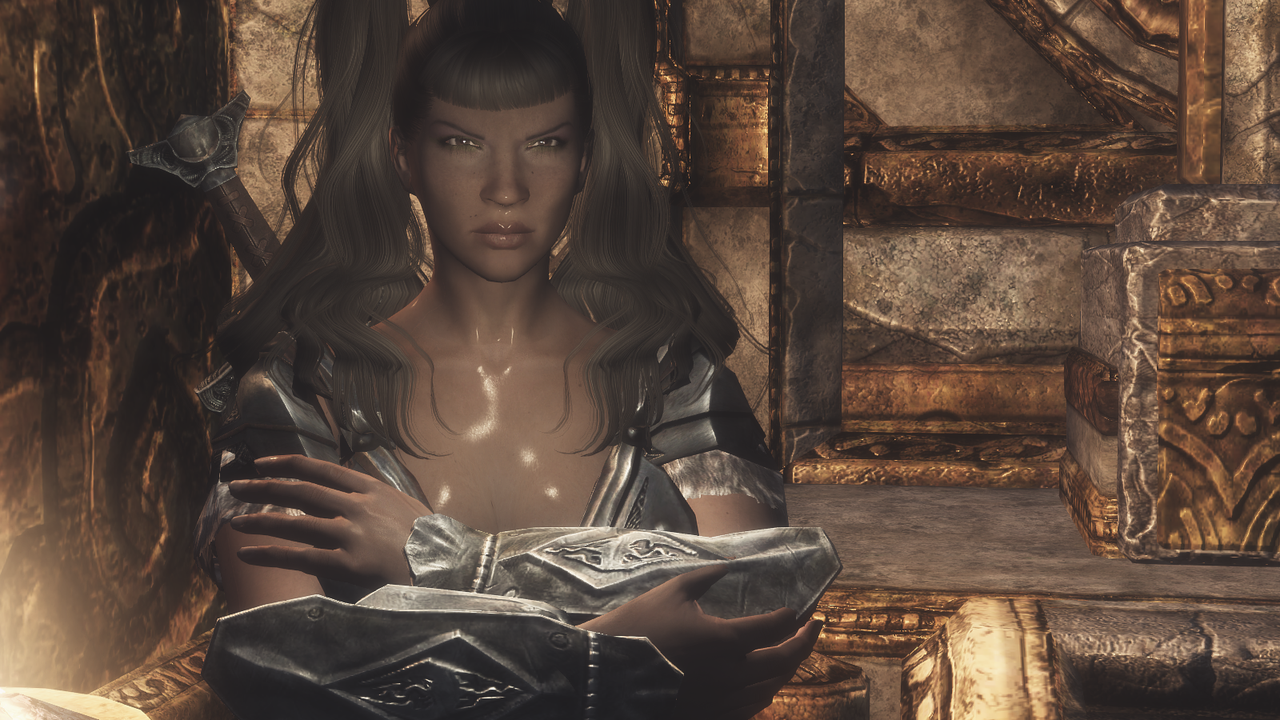 Igmund waved his housecarl off. “Who are you girl?”

“What is it that you wish to speak of?”

“Vampires, Daedra and Forsworn have breached Markarth’s walls,” Lucari declared. “The people aren’t safe. Something needs to be done!”

Igmund rose to his feet. “So you’re the one who has been spreading vicious lies about my guards and the security of my city.” He clenched his fists. “I should haul you off to Cidnah for your fear mongering and blatant attempts at demoralizing my citizens.”

“Calm down nephew,” Raerek advised. “Just like earlier, there may be some—”

“I will NOT be calm Uncle. What I will do is end this nonsense here and now!” 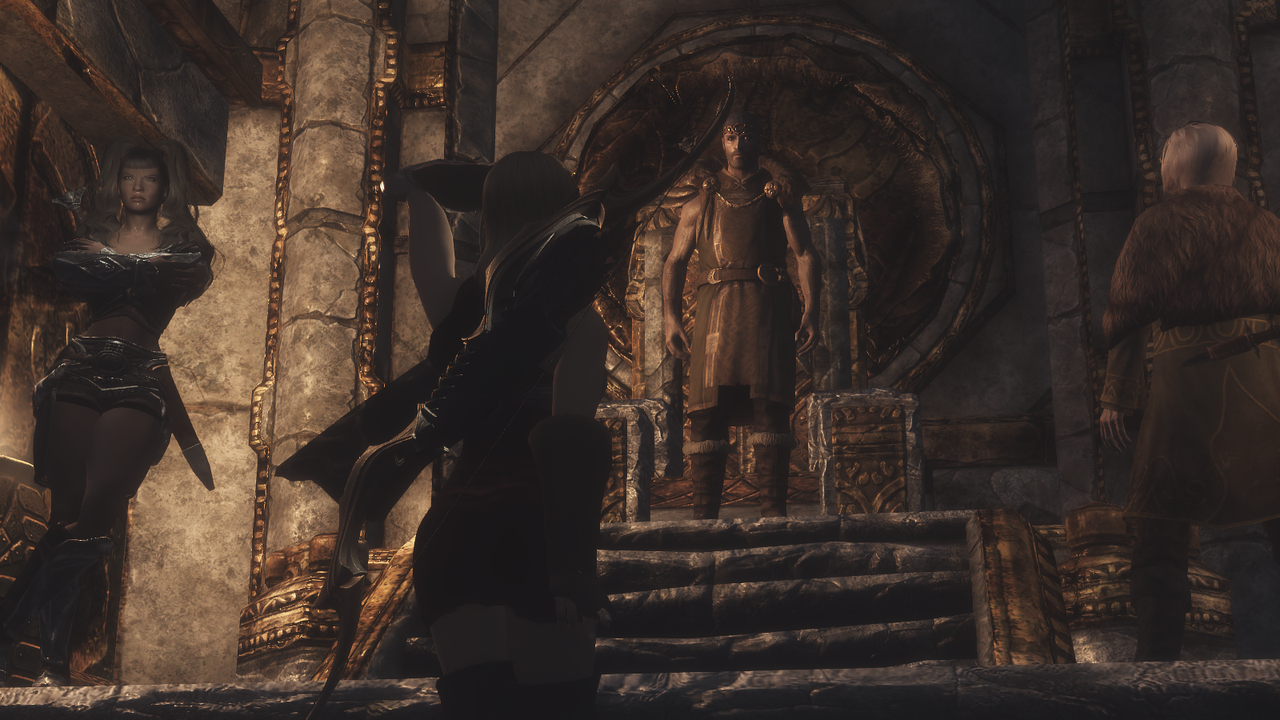 “Pure-Shot, what pleasure do you receive from this? Clearly you’re a wolf trying to set my sheep into disarray.” He looked Lucari dead in the eye. “But you’ve made a grave mistake, girl. I know who you are, what you look like, and from the rumors going about I know exactly who your accomplice is.”

“You don’t understand! I’m only trying to—”

“If your name or actions find their way into my ears again,” Igmund said, ignoring the girl. “I promise you you’ll never see the light of day again. That goes for your friend as well.” 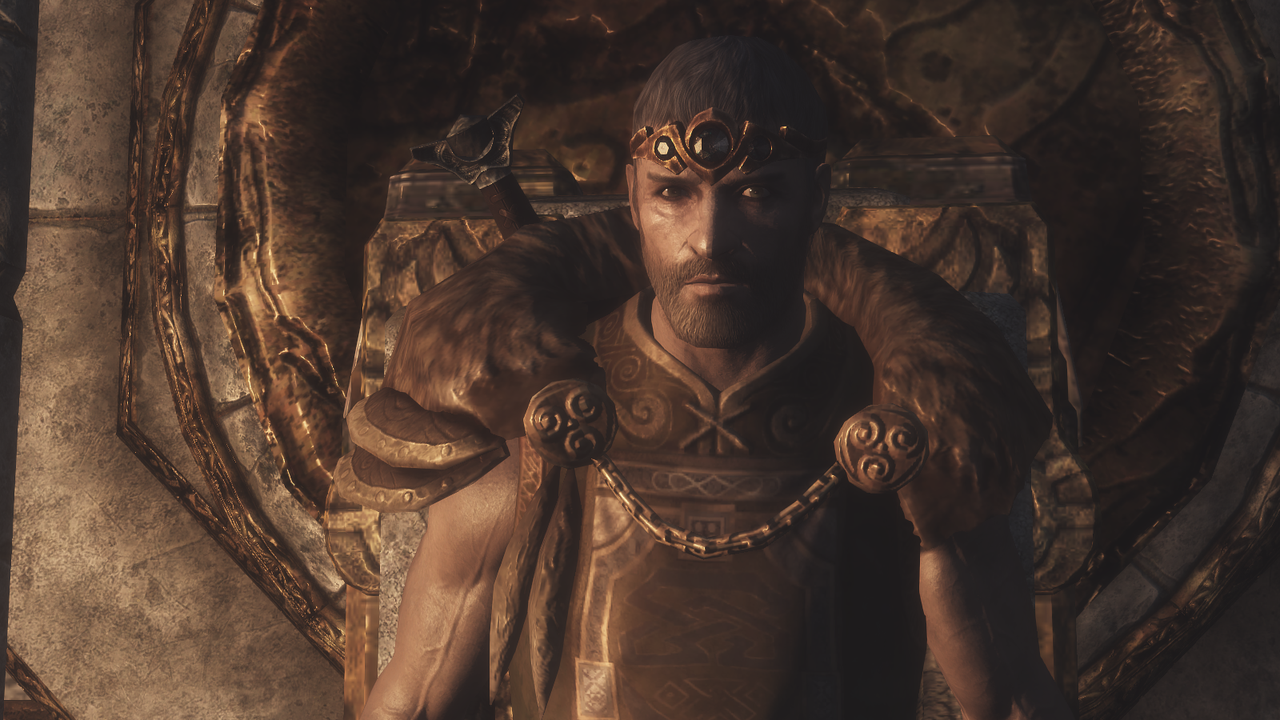 “This is insane! People are dying by the day in your town and you choose to turn a blind eye to it?” Lucari said. “This is crazy… this is madness!” 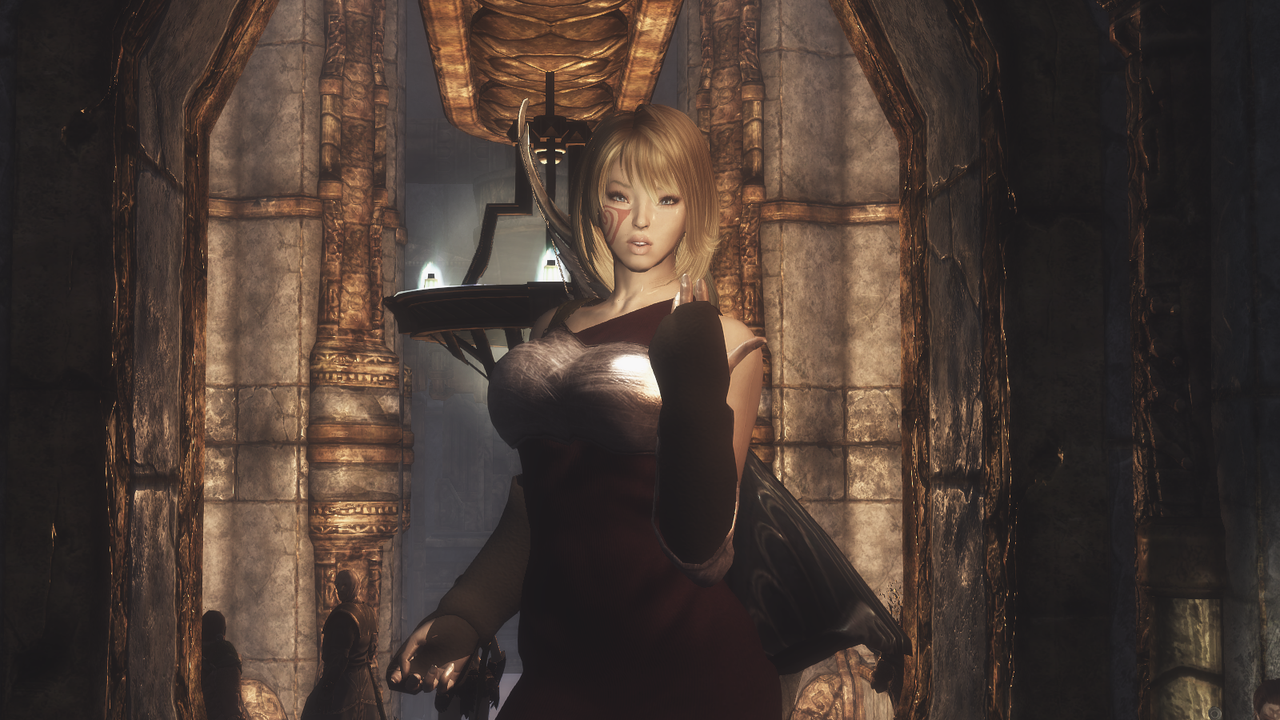 “Madness?” Igmund laughed and nodded toward his housecarl. “THIS, IS, MARKARTH!” Cheers filled the keep at the sound of her decree. 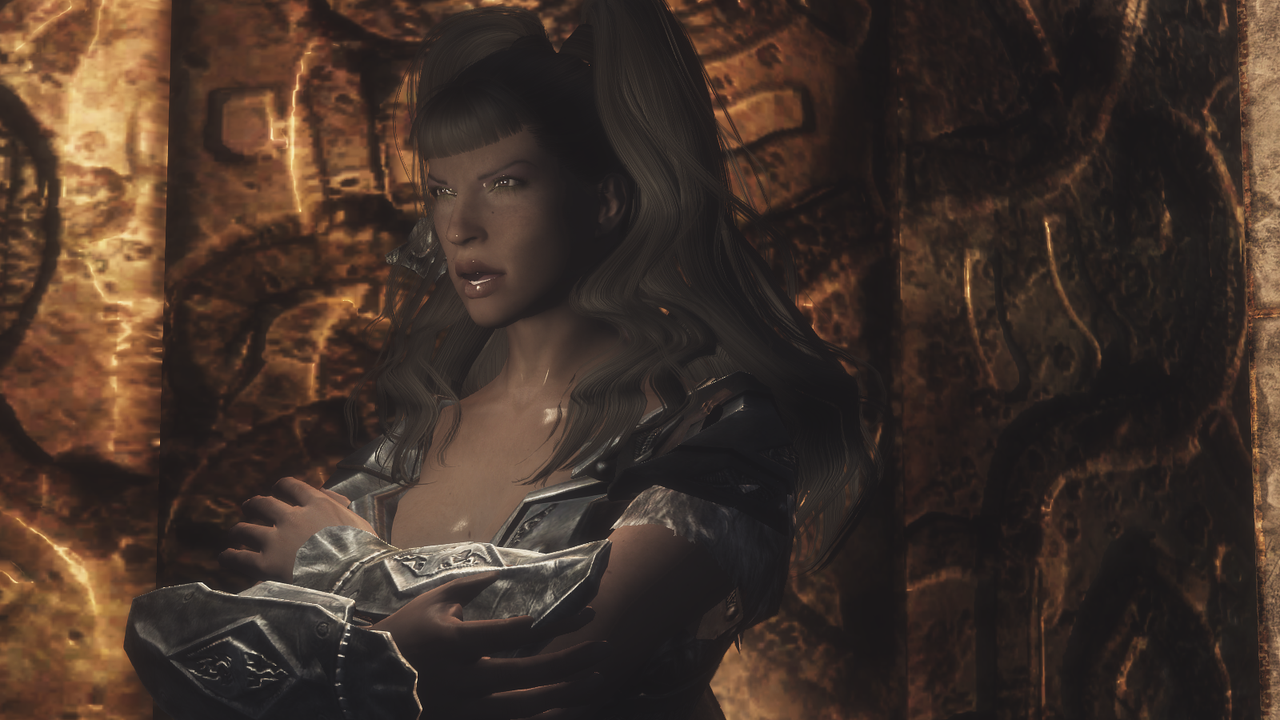 “W-what is wrong with you people,” Lucari said, her eyes filled with bewilderment. 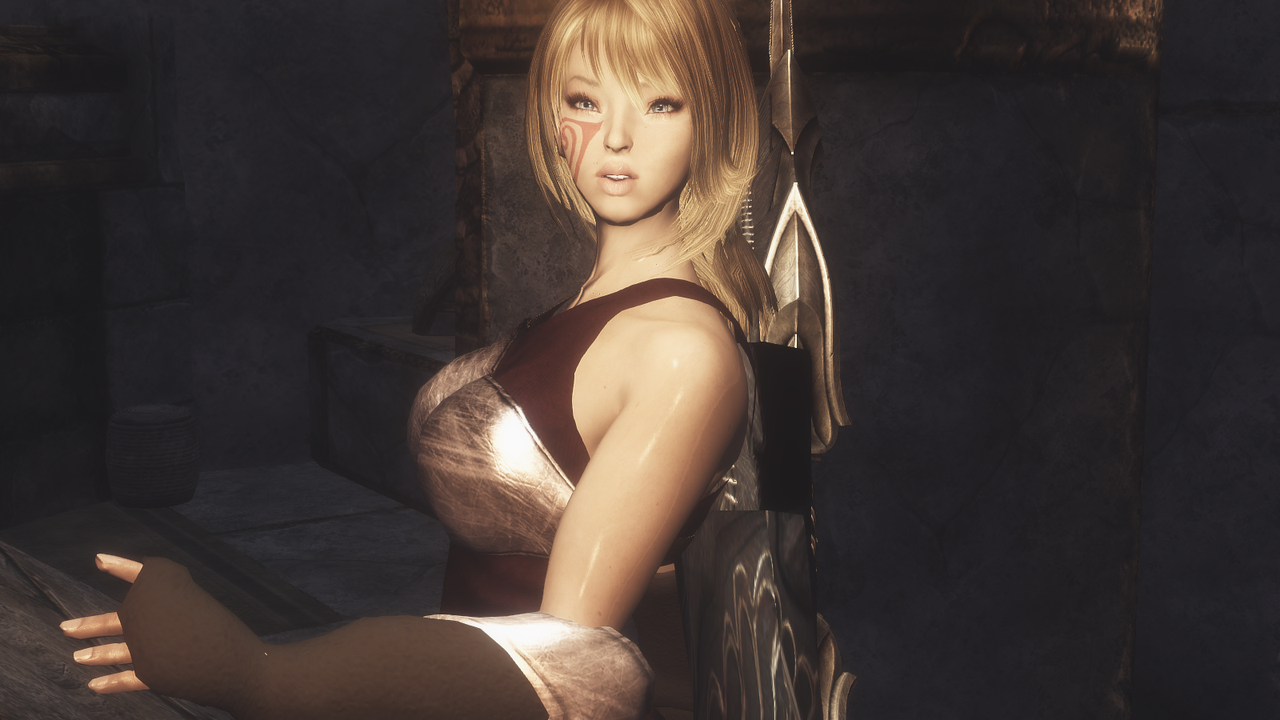 “It seems that this creature can’t seem to take a hint,” Igmund said as he sat back down. “Maybe the guards she thinks so ill of can help her with that. RAEREK!” 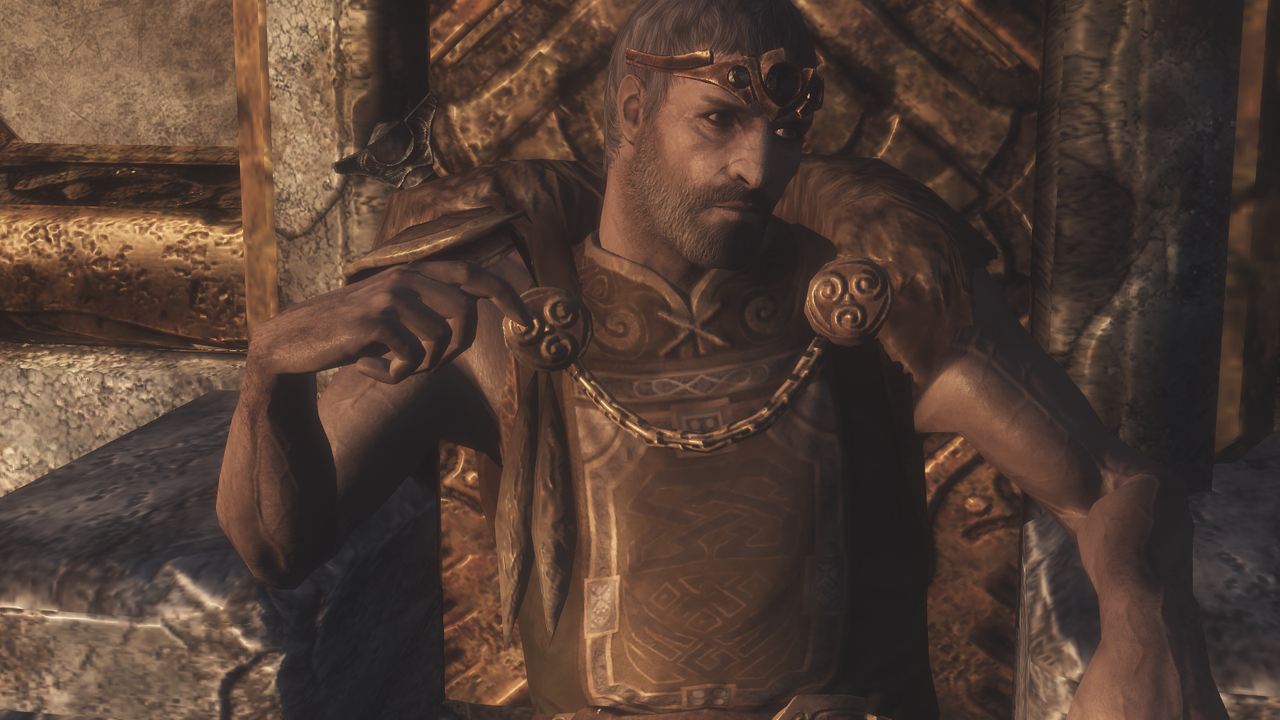 “He means you should go child,” Raerek said. “Unless mining silver until you cough it up is how you envisioned spending the rest of your life.” 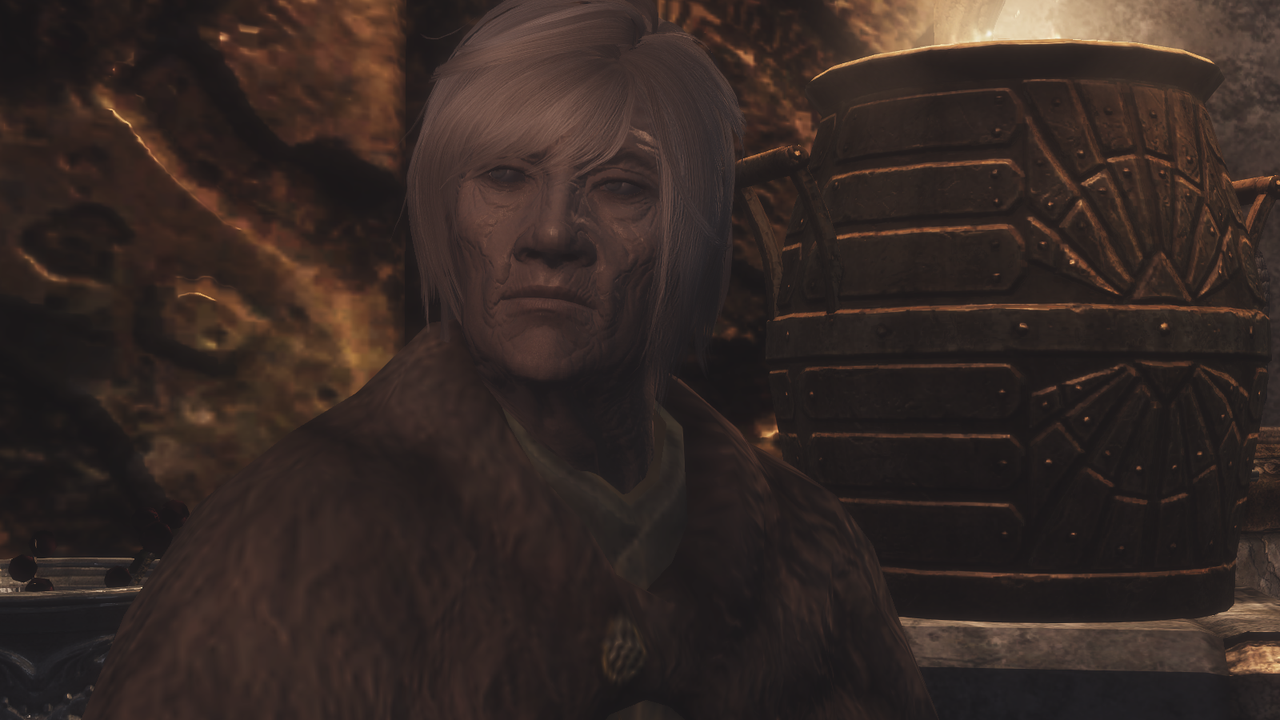 “This is hopeless,” Lucari said. “I’ve got to find her… she’d know what to do.” The girl turned and ran from the throne room. 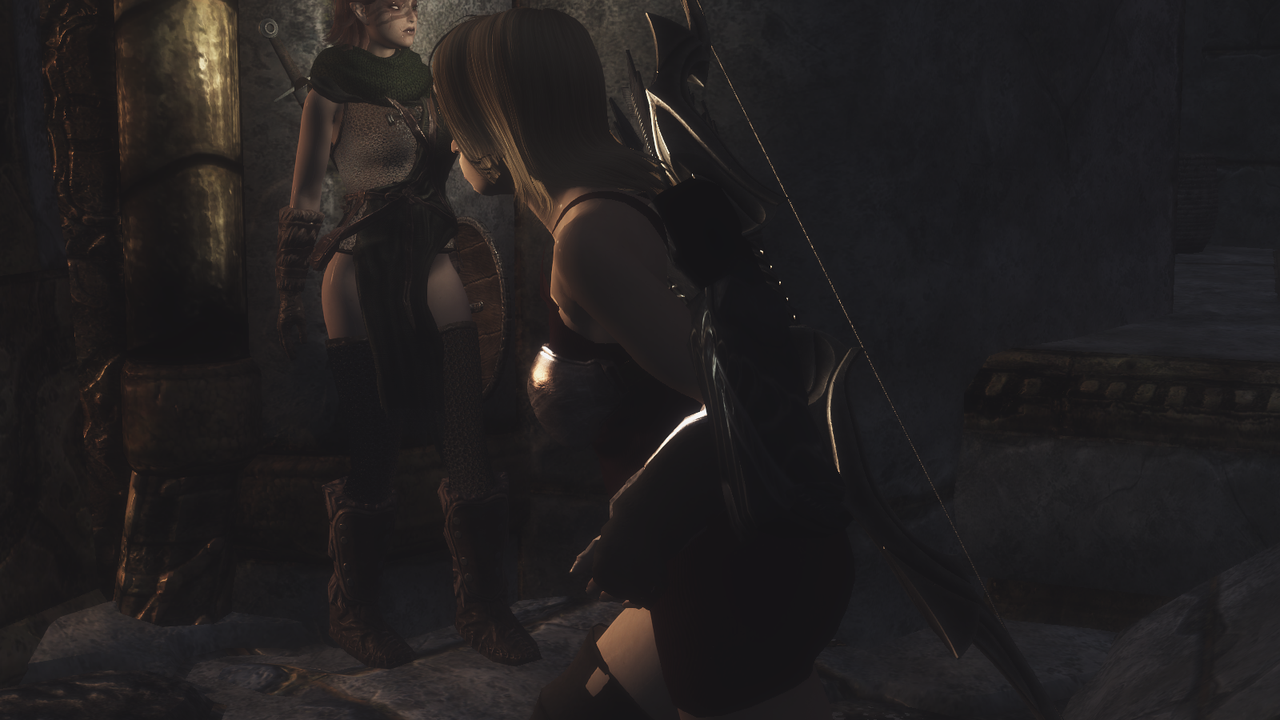 Heilda watched her as she made her way out of the keep. “That was a determined look in her eyes, My Jarl,” Heilda said. “She’s definitely going to stir up trouble if left alone for much longer.”

“Can I count on you to handle her, if things get out of control, Guard Captain?” Igmund asked. 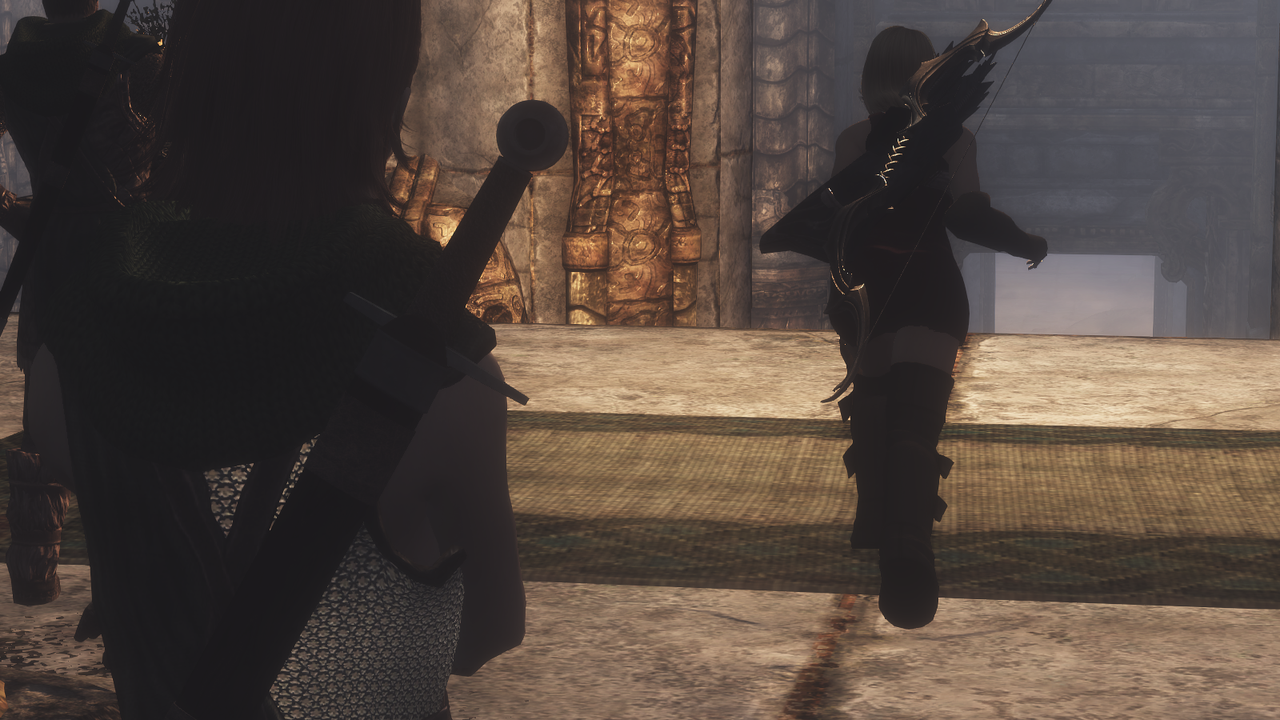 (Dragons, Vampires, Forsworn, Daedra, wannabe heroes, and a mortal that can slay dragons? Now is definitely not the time for war… Nor is it the time for Heroes to be cooped up in cities playing guard.) Heilda smiled having come to a conclusion. “I guess I’ll have to remind them all why I used to be called the Steel-Warden of the Reach.” (And maybe I can get my hands on the bitch that gave me the moniker ‘One-Eye’.) 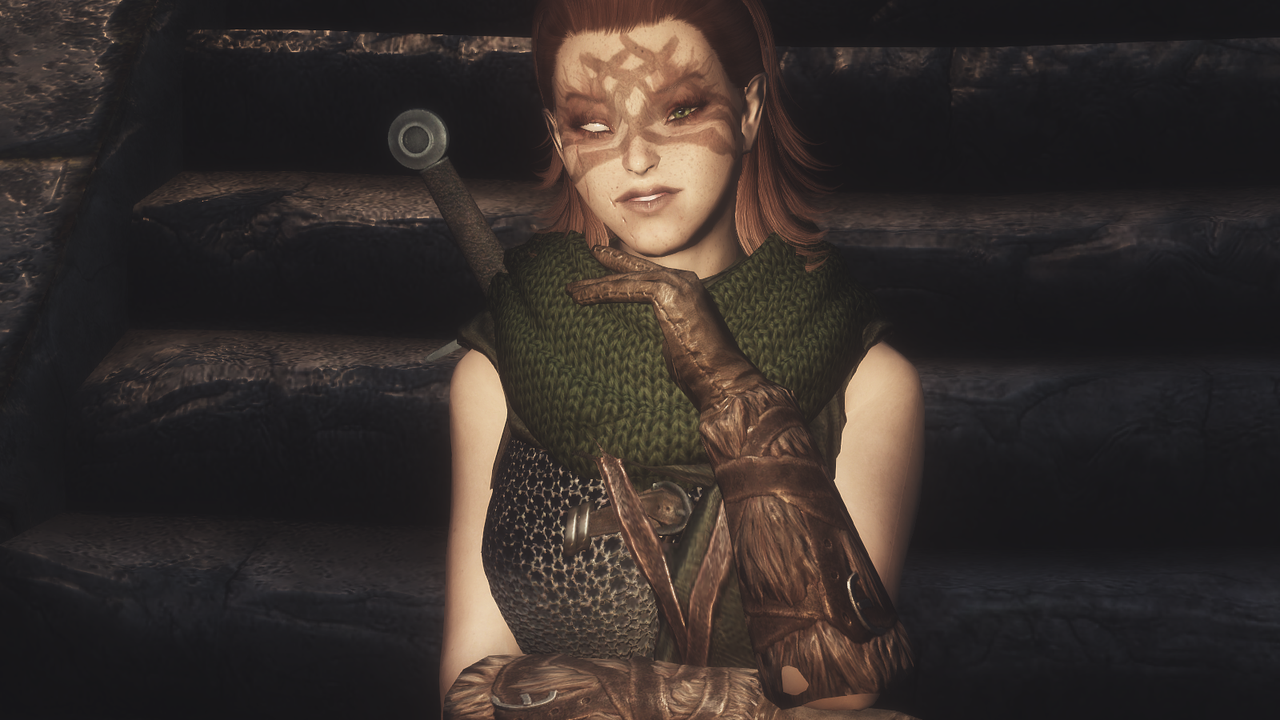 “That bs about people talking about you isn’t real,” Carciel said, rolling her eyes. “So get your shit together Flame-Child. We’ve got recon to do.” 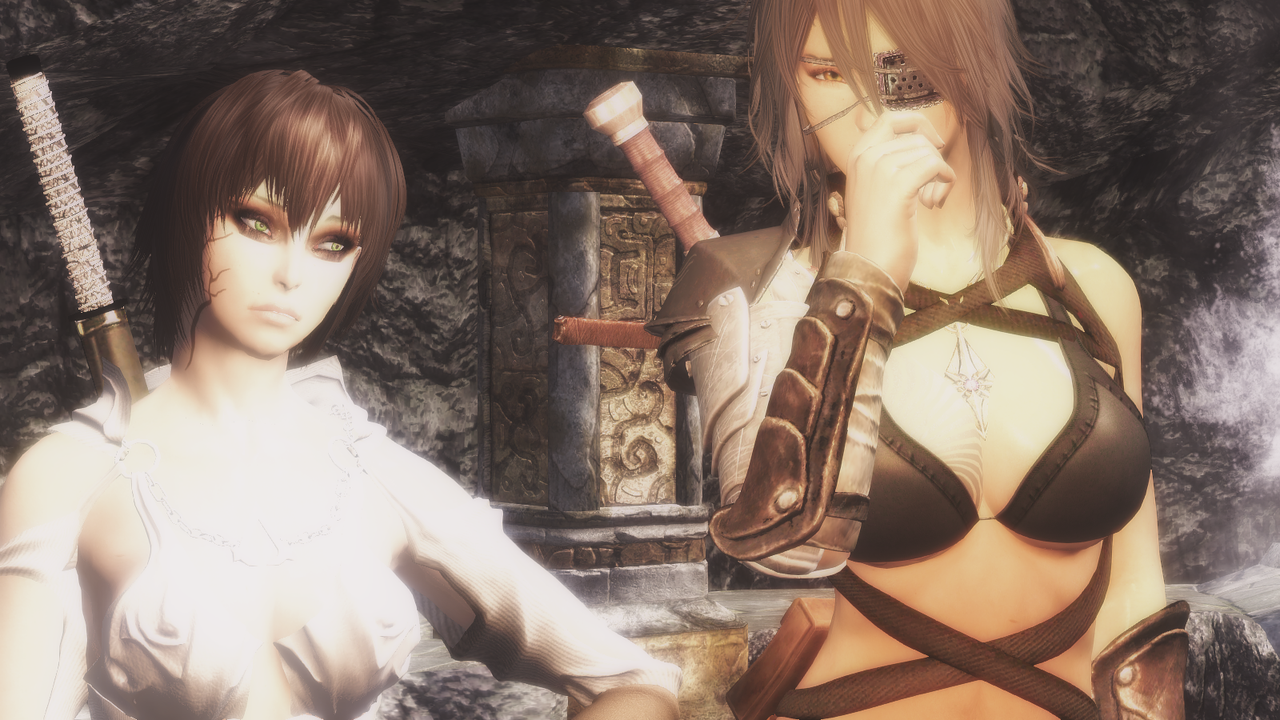