"I am not going to coddle you like your former Master." 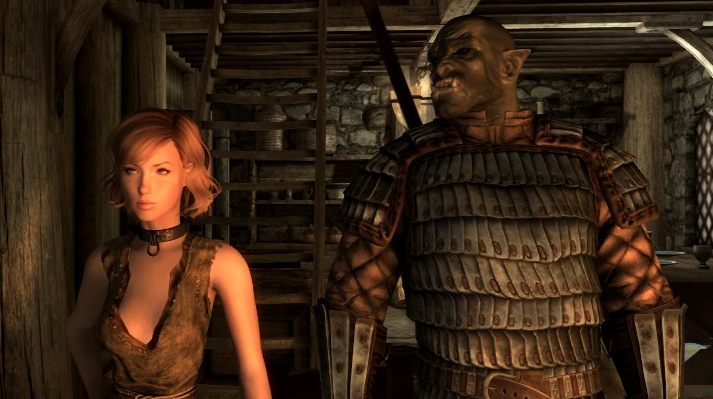 Maer had not felt coddled at all, but she knows better than to say anything.

"The rules are simple," he continues. "You obey. Without thinking. Without hesitation."

He's seated comfortably under an overhang, having a drink. She is standing in the cold rain.

"I don't care if you're enjoying yourself or not when you are fucked. You give it your all. "

He takes a swig.

"I don't a care if you're hurt, I don't care if you live or die. When we fight you give it your all. Do you understand?"

"Yes Master," she says attentively. She's finding it hard to read his face. What is he thinking? She never liked Orcs - was scared of them is more like it - and avoided them where possible. That isn't an option now.

"You don't talk. Not to me. Not to anyone else, ever." He pauses to take another swig, then continues. "The exceptions are when I explicitly give you permission or when it is absolutely necessary. Do you understand?"

He slaps her across the face hard enough to knock her down.

"I did not give you permission to speak. It was not necessary. You can nod or shake your head. I won't warn you or let you off easy next time." He continues as she gets back on her feet, groggy. "If you think you have to speak, kneel. Maybe I let you. If you think I might want to fuck you, present yourself. Do you understand?"

She opens her mouth to respond, but catches herself. Instead she nods.

He reaches out and grabs her crotch, slipping his fingers in underneath her garments. His touch is surprisingly gentle as he manipulates her.

"You are wet. Is this turning you on?" She nods. It is. He scoffs. "The Thane was right. Your head is messed up."

"Last rule. Don't look anyone in the eye. Not me. Not anyone else. Unless they're fucking you. Then you may. Understand?"

Once again Maer nods. She wonders, will he fuck her soon? She hopes so. 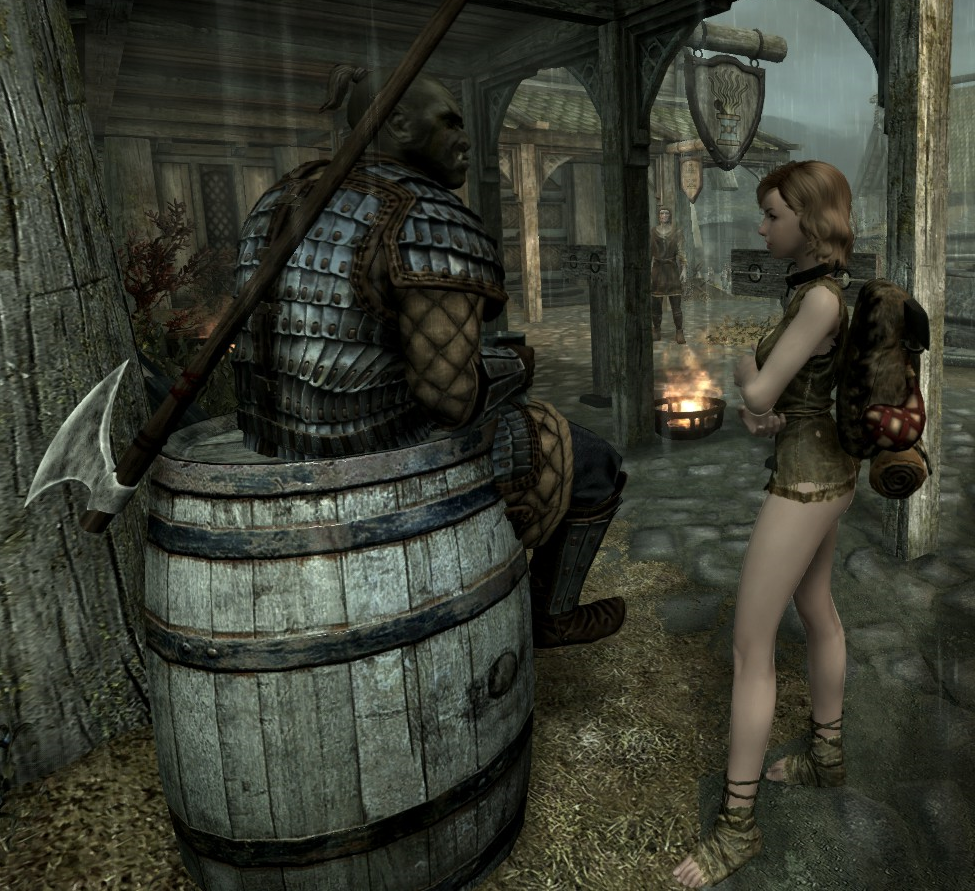 "You should get ready. You will carry and maintain the tent and all supplies. When I say "make camp" you make camp and start the fire. You will not have time to search for wood, you should always carry enough. I expect you to have what we need. Do you understand?"

Maer nods, then she kneels next to him. She has a question.

"Are you sure you want to do this," he asks. "I will punish you for useless talking."

"Master, I have no money. How will I get supplies?"

He sneers. "Careful. That is an almost useless question. It is your problem to make sure we are supplied, You will face the consequences if we are not. Sometimes I may give you money to spend, but not now. You have one hour before we depart."

Luckily she packed some food when she left the Thanes house, out of habit. She hopes that's enough. Maer is not ready to turn thief yet. Maybe she can do some hunting?

She has another question, but given his tone she decides not to ask. Instead she goes to chop wood, to ensure she has enough to make a campfire. 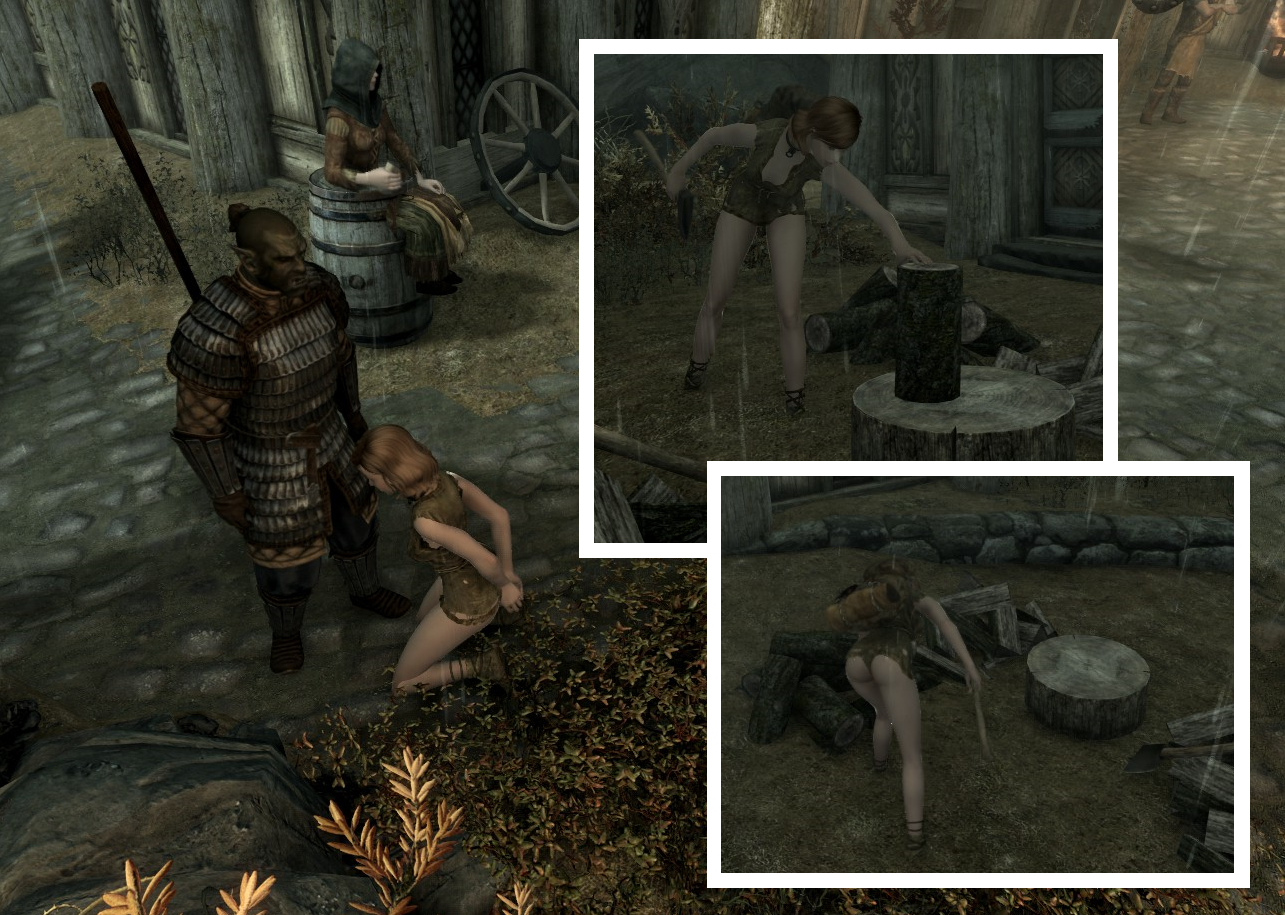 Her muscles are aching from the work. She's not used to physical labour like that. Luckily the exertion helped her keep warm, even in the cold rain. As she walks back to her Master she's wondering if she should "present herself". Should she bend over and bare her ass? Should she get on her hands and knees and wiggle her butt at him? Lie on her back and spread her legs... she's not sure what he likes or expects. But it would be nice to get fucked.

It turns out he has another thing in mind.

"Go whore yourself out. Bring me the money you make. You may talk to potential clients, but only on the topic of fucking."

She wonders, weren't they support to leave Whiterun? Didn't he send her to get ready? She starts to ask but catches herself when she sees the snarl on his face. It could be a grin. She's not sure, but it frightens her. Instead she nods.

"What are you waiting for? Go!"

It is really hard to, but she manages to turn away without saying "yes master" or look him in the eye.

Inside the Bannered Mare Maer starts looking for clients.

"Are you looking for a whore?"

As she walks around the inn to sell herself, Maer wonders how she'll manage once she's no longer a slave. When she was at the college she had sexual adventures, sure, but they never got her quite to the same place she got to the moment her old Master put a collar on her and fucked her. Does she want to give up that level of intense sexual satisfaction? The question is academic at this point. She's a slave and she needs someone to fuck her for money so she won't get in trouble with her new Master. Why aren't the men in Whiterun horny? Is something wrong with her?

"I'm looking for a whore, and I heard you're willing to take it rough," someone says.

She tries to hit the perfect mixture of innocence and desperation. "I'm willing to do anything, sir, but please...." As she turns, she registers that the voice sounds familiar.... 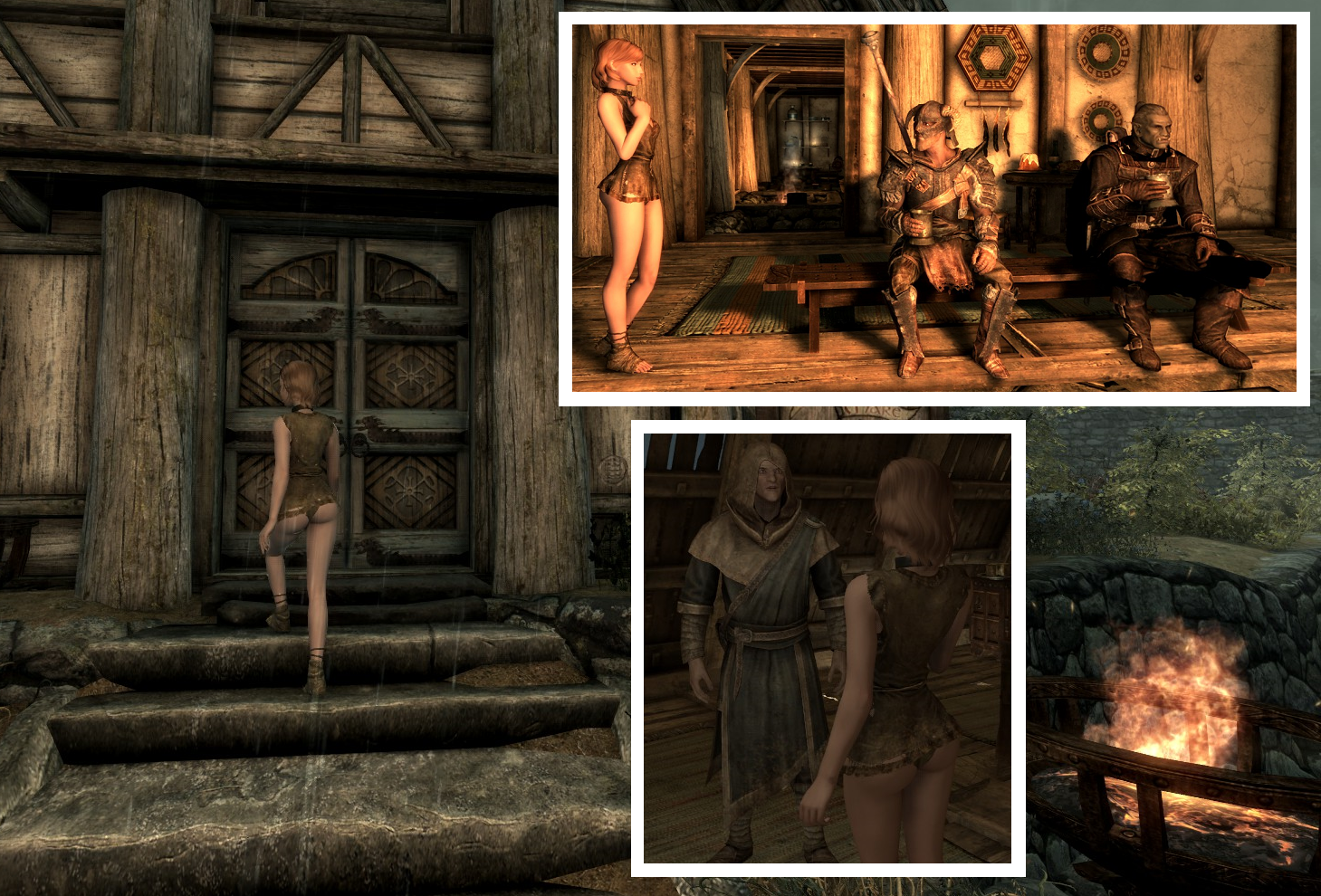 "Onmund?" What is he doing here?

She blushes. She knows her face must be bright red. At the same time, her nipples are throbbing, that's how erect they are.

"I followed you. I had to know what was going on. It made no sense. Then when I got to Whiterun I went to the Thane's house." As he pauses his eyes moves from Maer's face, down to her breasts. "I talked to Leona. She said I might find you here... but she never mentioned that you'd be... like this."

Onmund's expression goes through a rapid series of changes. First he looks confused. Then concerned. Then thoughtful. Then... something else. "Well Maer... if someone has to fuck you for money, might as well be me." She notices the bulge at his crotch. He has a raging erection.

Onmund always liked a bit of a rough edge when fucking her, and he always talked dirty to her. But now, he really lets loose.

"You thought you were too good for me, huh?!" Hard thrust. She wants to say that that's now how it was, but he pulls her hair and slams her head into the floor. She yelps.

"You and your fucking lesbian cunt friend, always teasing me!" Hard thrust. Slap across the face. Maer starts panting. He means it. He's full of bile and he's taking it out on her... and her body is responding. It's a good fuck. It's what she's been needing.

He stops and pulls out. "I'm going to finish on your face and mouth! Open up and say aah you cheap little bitch!"

She obeys, of course, robbed of her climax.

When he's done he gets a cruel look in his eyes. "I shouldn't have wasted my time on you Maer. I could've had you for pocket change." He throws her money on the floor. "I'll see you around... now that I know who you really are."

She can hear him whistling to himself as he walks away. 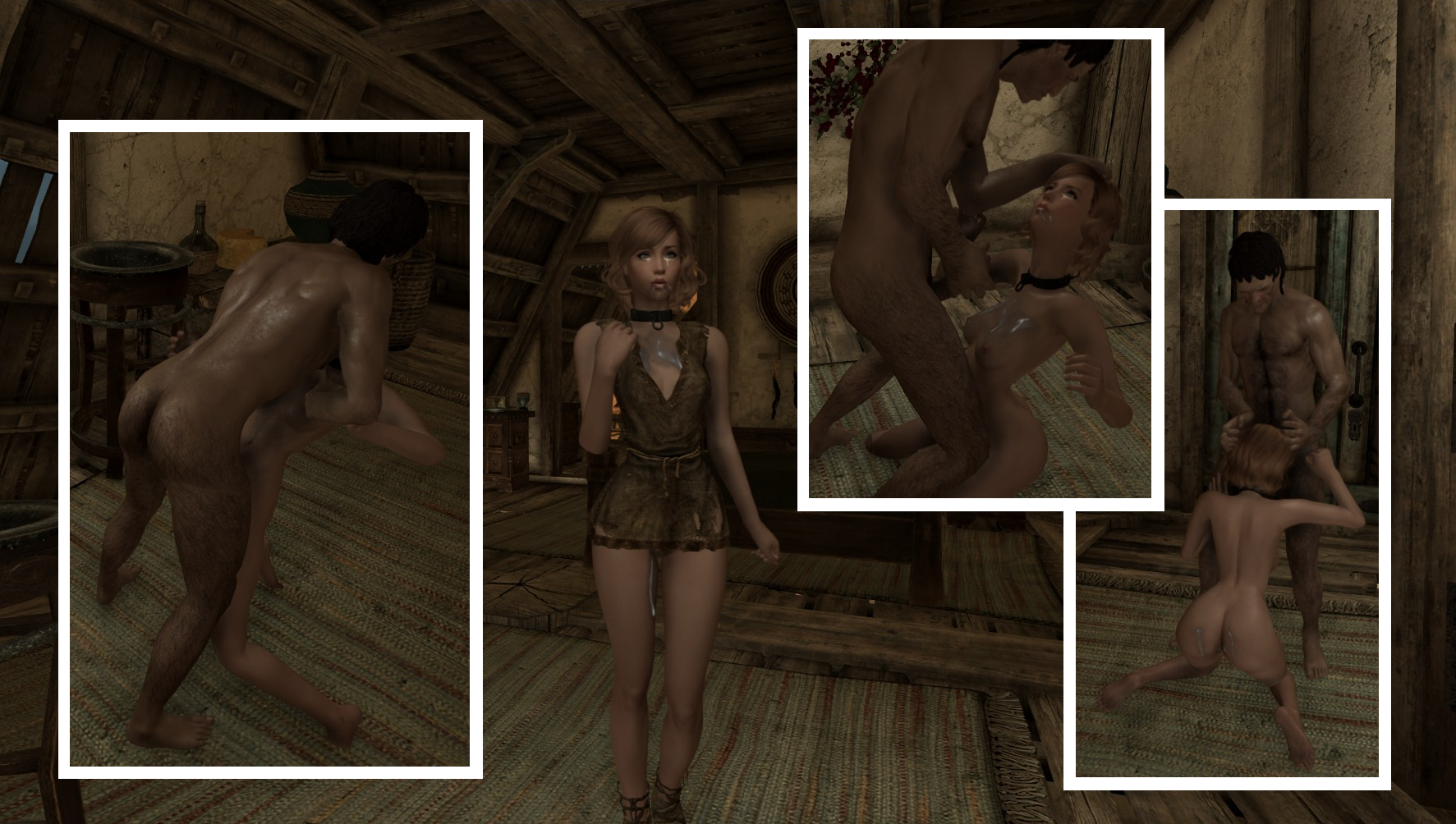