As they walk through the cold misty morning of the Reach, Maer's Master amuses himself - and Lydia and Leona - by triggering the vibrating gem on her clit piercing. "That should get your blood flowing and keep your warm."

"I think she wants you to keep going," laughs Leona. 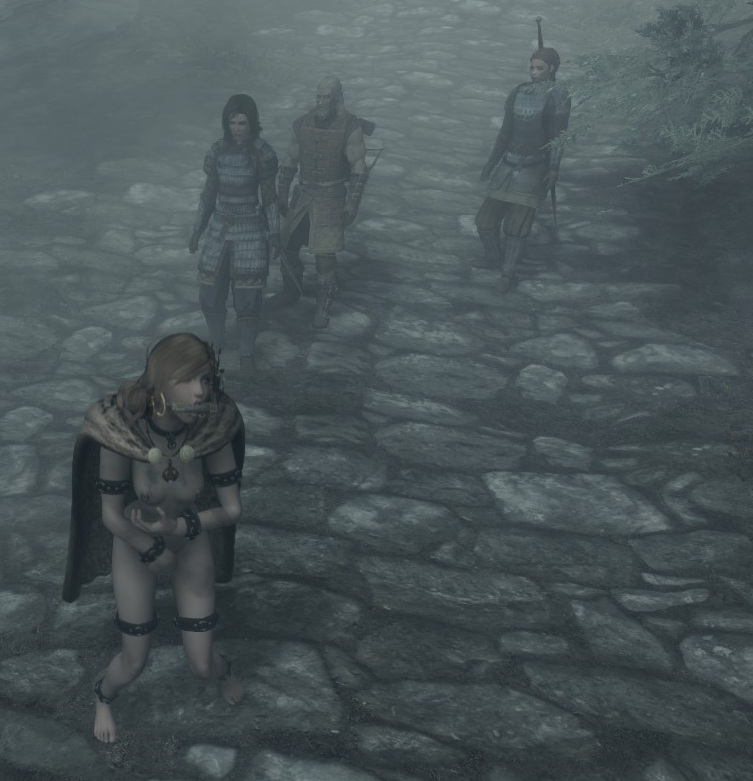 Maer knows her Master has a bunch of business to take care off. He spoke to the Jarl of the Reach about something, and there is also the matter of the new - and apparently missing - Sybil of Dibella. Is there also something about a mine? About two mines? And some bandits? And some other stuff? Maer tried to keep on top of it, but the way her Master keeps her oscillating between pain, arousal, humiliation and orgasm makes it hard for her to focus on anything other than the moment. Right, they had already finished with one mine....

Later, Maer's Master negotiates a peaceful resolution to a mining dispute. As part of sealing the deal, he offers her body up to the leader of some mercenaries. "She's an acolyte of Dibella," her Master says. "She is trained in secret love making techniques, and she spends hours every day to make sure she's soft and supple for your pleasure... and you can do whatever you want to her." The mercenary leader doesn't seem to care, preferring a rough hatefuck. 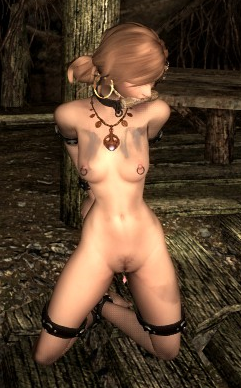 As the mercenaries depart they make some snide comments to Leona and Lydia. Something about how they should learn from Maer. It does not go over well, and Lydia and Leona are ready to get into it with the mercenaries right then and there. Leona, in particular, is quite worked up about it.

"If you compare me to that whore again I'll cut your cock off and shove it down your gullet, understand?"

There's a moment of tension where the mercenaries seem to consider whether to push it one step further. Is one more misogynistic joke worth the risk of a fight? In the end they decide against and depart without further words. 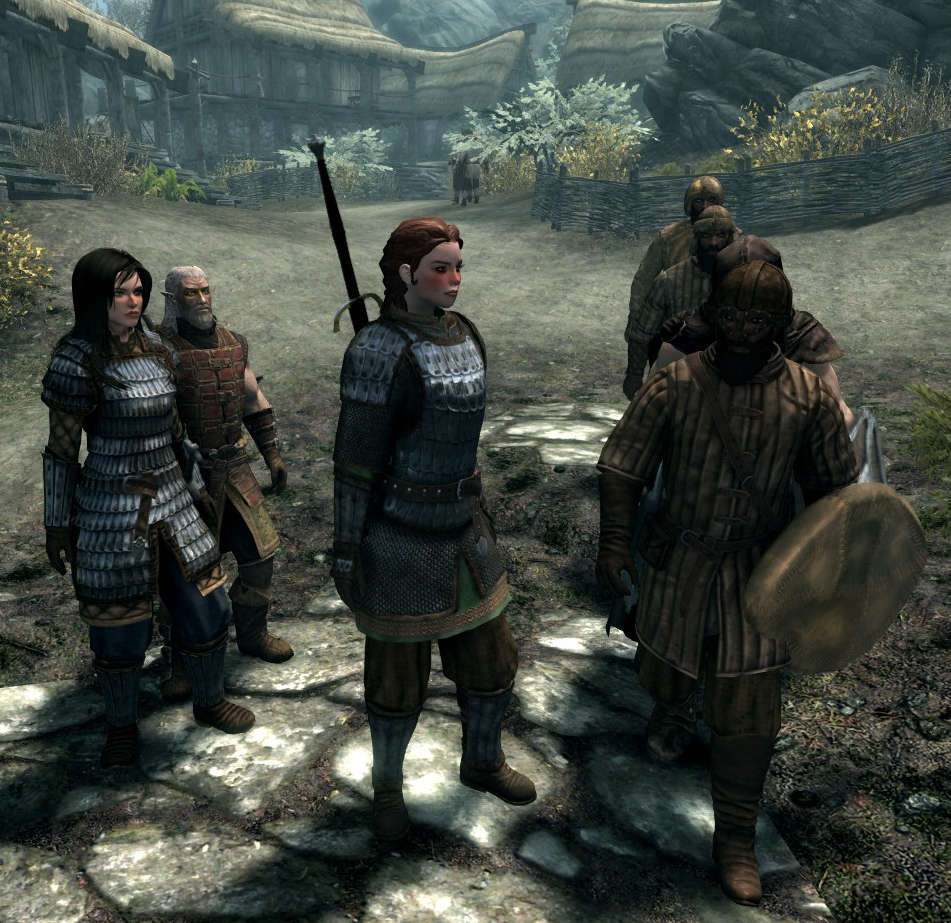 Since becoming a slave, Maer's existence has been defined by humiliation, pain, and sexual ecstasy. Her body is constantly aching from the rough usage at the hands of her Master and the others, but she has grown used to it in a way. Now she's experiencing another level of exhaustion. Her orgasms have been intense enough - and more importantly frequent enough - that the post-orgasmic quivering and lack of focus extends for hours rather than minutes. If she was relaxing on a bed, dozing by the fireplace, or otherwise able to indulge herself it'd be very pleasant - but it makes it much harder to think clearly when hauling a heavy load on the road and attending to her Master's whims.

"How's the gag treating you? Is your jaw sore?"

"Oh really? I'm surprised, but if you say so I'll leave it on for a while longer." 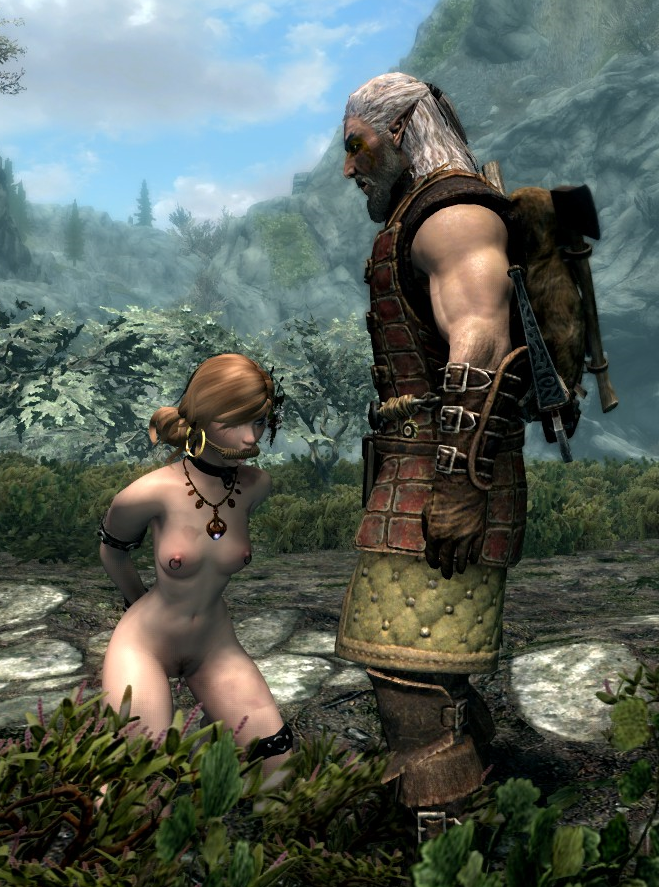 In spite of the weariness and the jaw pain, Maer has a success. She finds that using a ward spell in one hand and frostbite in the other, she can take out a single opponent with little risk of getting hurt. Especially if she gets the drop on them, but even if she doesn't.

"Hmmf," says Leona. "I don't know why you indulge her. It's a pointless risk. The Thane doesn't want his little hussy to get herself killed."

Maer thinks some uncharitable thoughts about Leona. She doesn't say them out loud, of course. Even if she didn't have a piece of wood in her mouth, she wouldn't dare.

The gag is finally removed, but Maer's jaw remains sore. Still, it's nice to be able to talk, even if she's taken the lesson to remain quiet as much as possible.

They still send Maer ahead to continues in her role as a forward scout. This gives her the opportunity to take out another lone sentry by herself. Maer tries not to look too proud - she's pretty sure her Master would use that as a reason to teach her a lesson - but she is proud nonetheless. 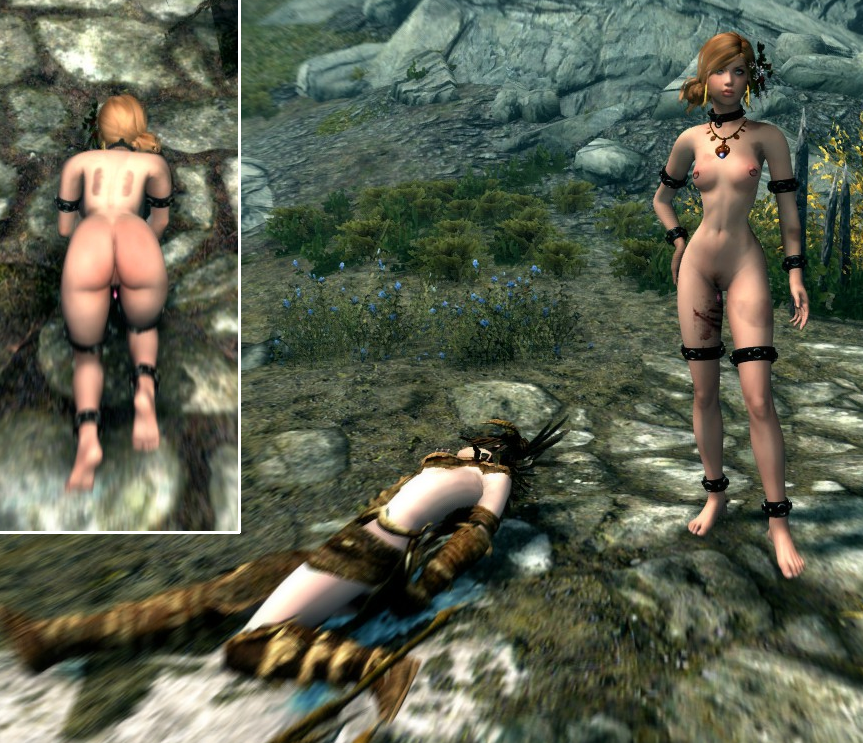 Of course, one of the things about being a slave - a sex slave, as her Master reminds her frequently - is that she doesn't get to decide when, where, or whom she fucks. So it would be a difficult decision for Maer to make if she got to make it in the first place. But she doesn't.

As the day goes on Maer services her Master several times, and Lydia has a bit of fun too. 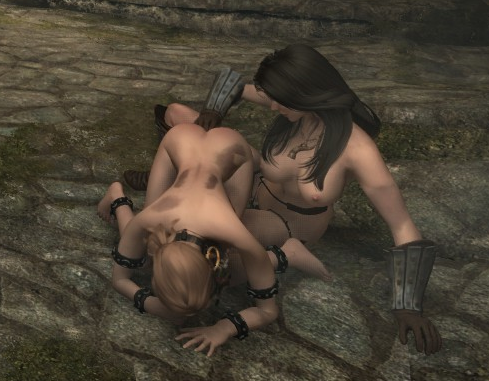 Once, after fucking her Master one more time, Maer gets up the nerve to ask if she can wear her clothes. To her relief he says yes. It's almost weird to be dressed again, she's gotten used to being naked. What she really appreciates, however, is being allowed to wear her boots again. Running barefoot in the jagged Skyrim landscape slows her down, so footwear really helps.

This, in turn, leads Maer to be even a little bolder with the lone sentries she comes across. One time, she manages to take out a sentry with a one-hit assassination style sword kill. It's a glorious feeling, even if the risk-taking also leads Maer to take a bit more of a beating at times.

Finally they clear out the last opponent and locate the future Sybil of Dibella. Maer isn't sure if they'd told her already but she'd been too scattered to pay proper attention, or whether they'd just not bothered to tell her. In either case, Maer is happy that they found the Sybil. They celebrate in their now traditional way - with a good fuck. Maer is pleased that her Master fucks her while Lydia and Leona do their own thing.

The orgasm fatigue is getting pretty heavy at this point, though, but hopefully a good night's sleep will cure it. 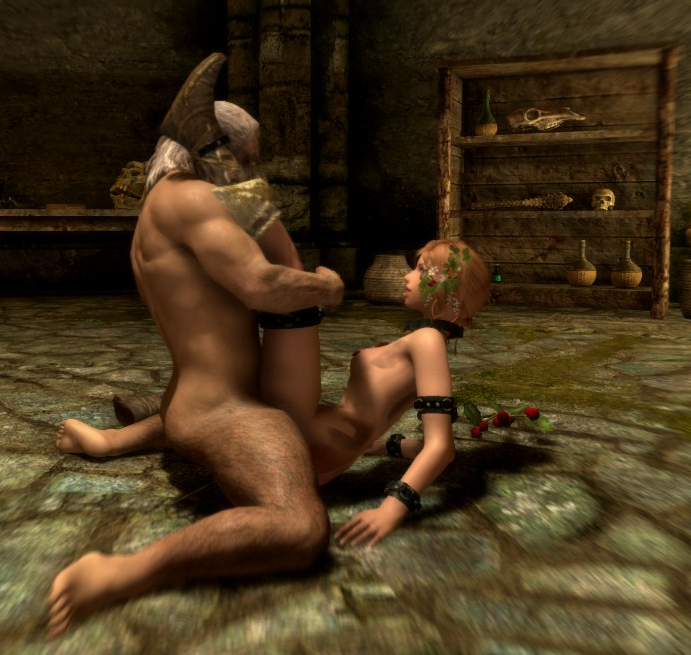