Hello friends,  I have a post with some cheats and walkby pictures.  Before I begin, I just want to say thank you to everyone who read and voted in Battle Sims.  It was a ton of fun to work on.  It means a lot to see that it's something you enjoy too.  While Battle Sims has been the focus of my last play through, I have been playing with some other things I would like to share with you.

I placed this lot at the very end of the row in Newcrest.  I think that it sits nicely there.  I know this sounds like I'm about to share a fat lot, but I can't right now.  Origin locked me out yesterday, so I have sign in and get the update.  From last month!  Oopsie 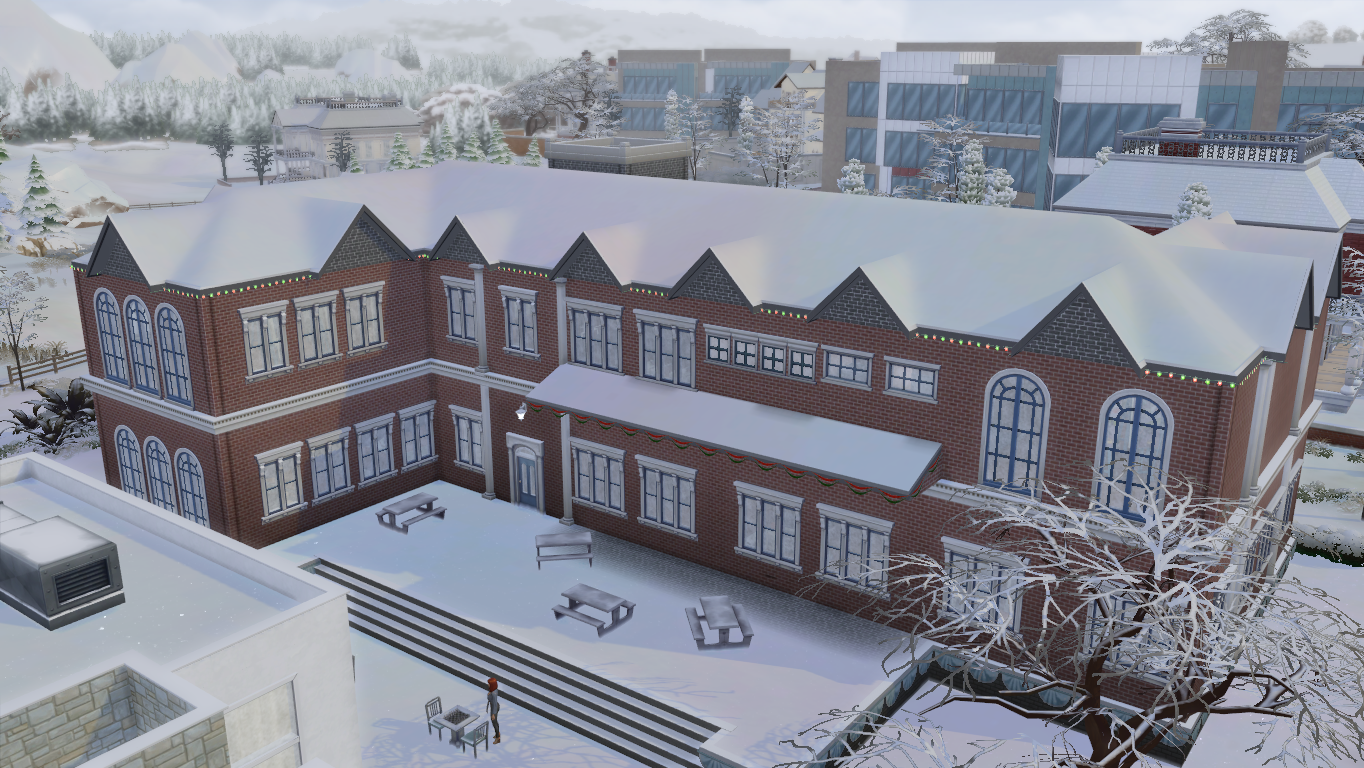 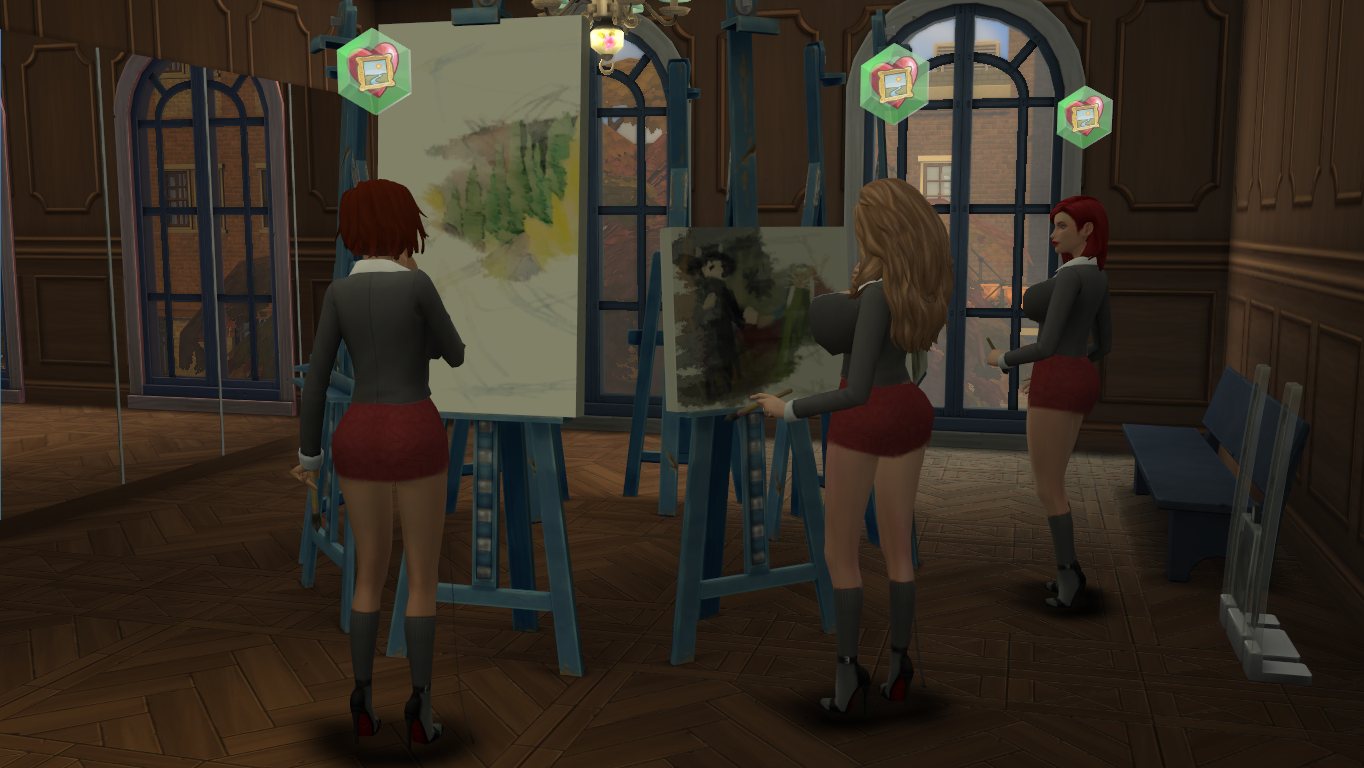 Poor Randall has been left to manage the ground all on his own, while the school looks to fill the role of Headmistress. 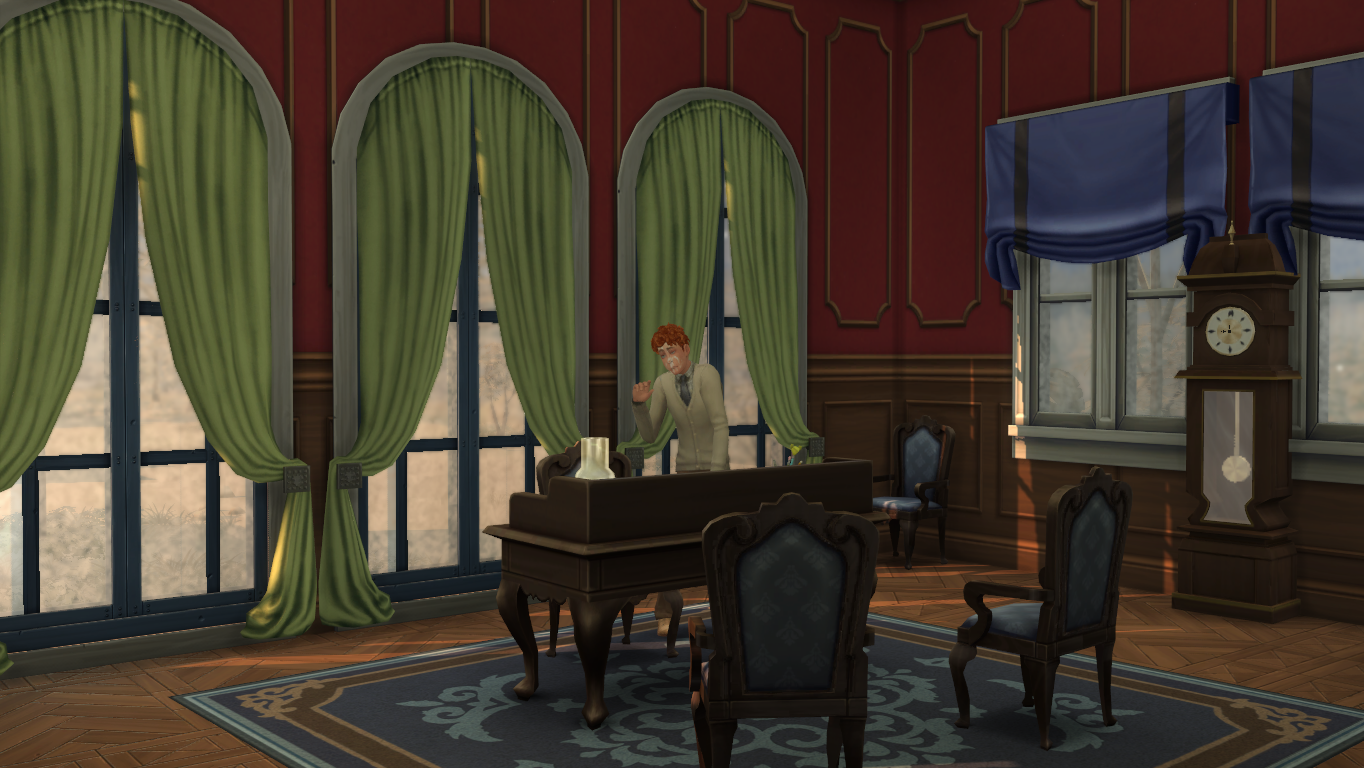 It think he's taken some white paint to the face from an unruly student.  Or some unlucky droppings from a bird flying above the grounds.  Oh Randall.  Back luck seems to follow you around! 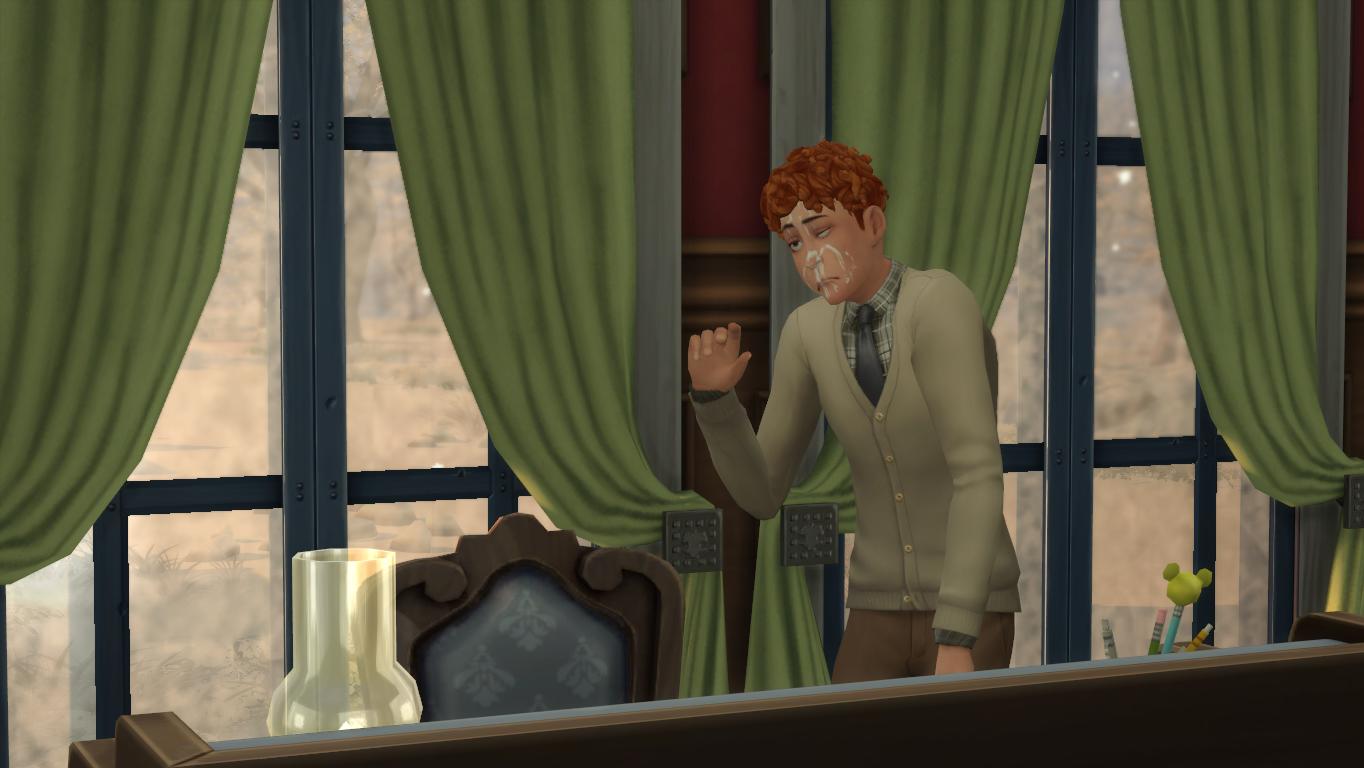 Making an "audience club" for the Starlight Accolades lot was a big improvement.  I try to travel here every time the event comes up.  I get excited for this, but it's just sims acting fancy and accepting awards for doing not much of anything. 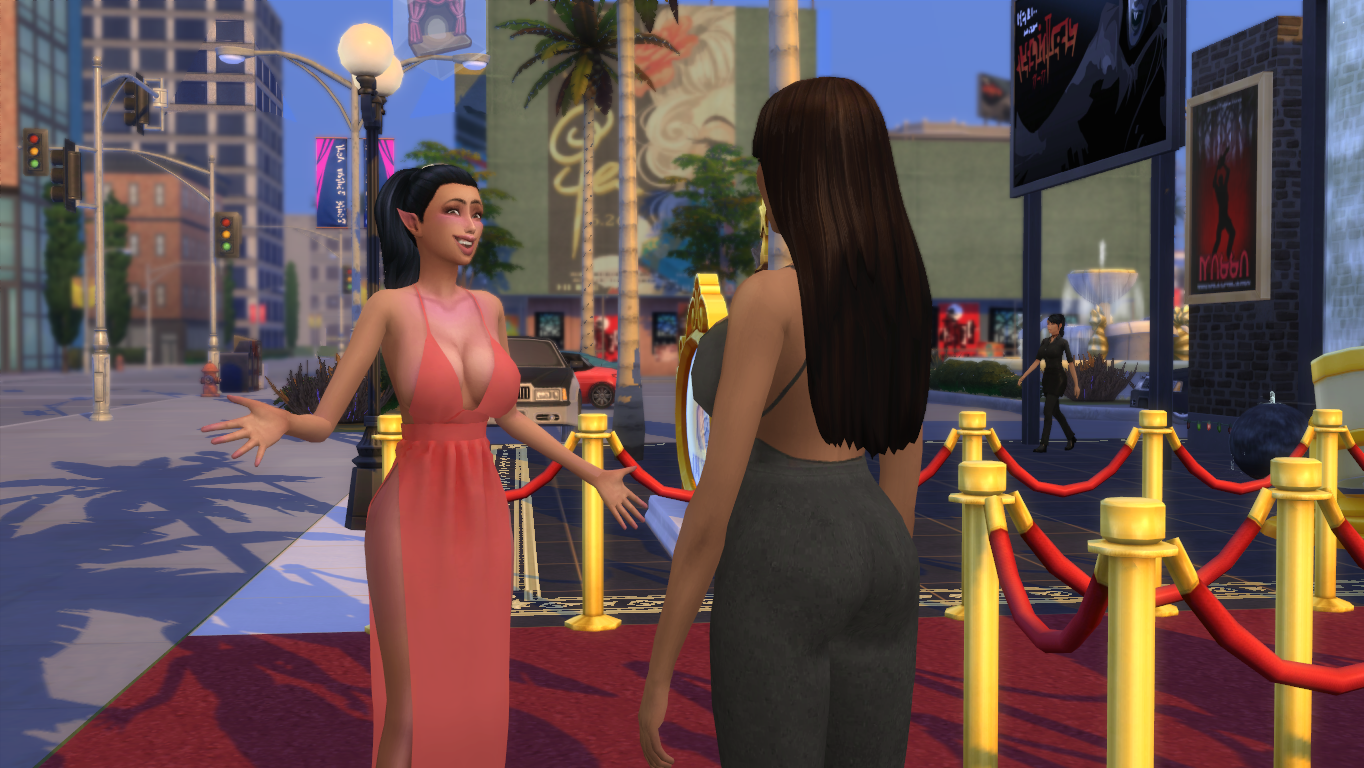 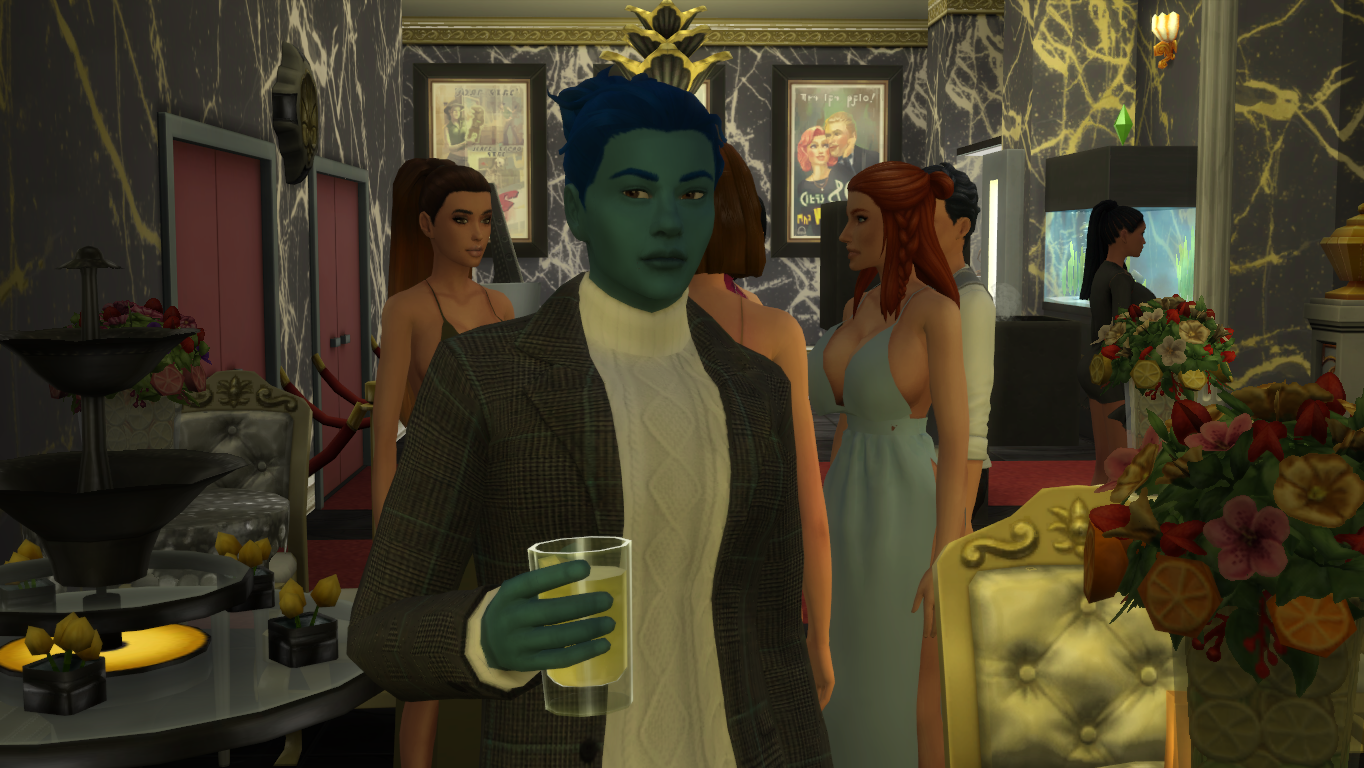 Here's a picture of a 'guys poker night' club I set up.  I have trouble with getting them to play cards all the time, so I added Don't Wake the Llama to their regimen. 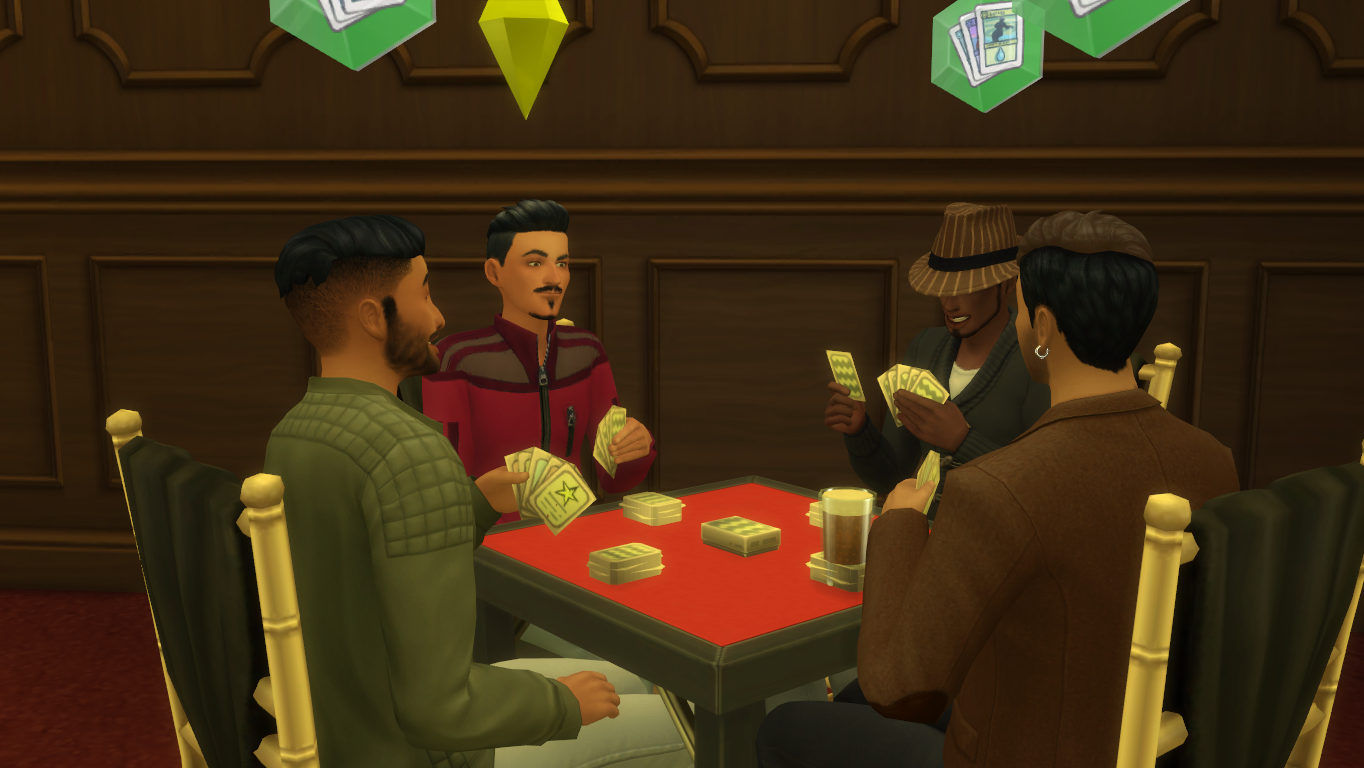 I am taking some time to get familiar with the terrain tools.  I'm always late to the party with new stuff.  Look at this, I made a hill. 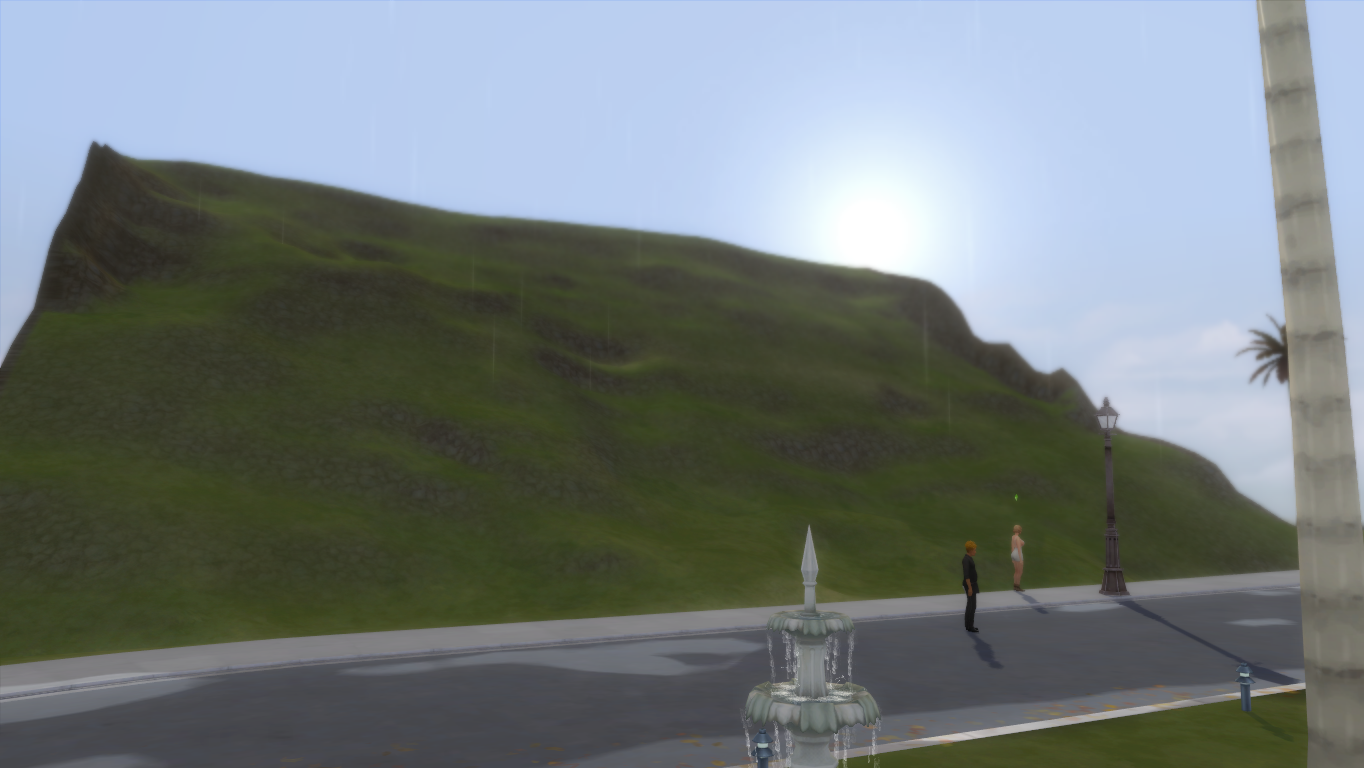 I was trying to get a sim to walk from the bottom all the way to the top, but the incline needs to be smooth for that.  My sculpting technique could use a little work, but Megan finally reached the top.

View from the top.  Well, almost the top.  I should have brought golf balls. 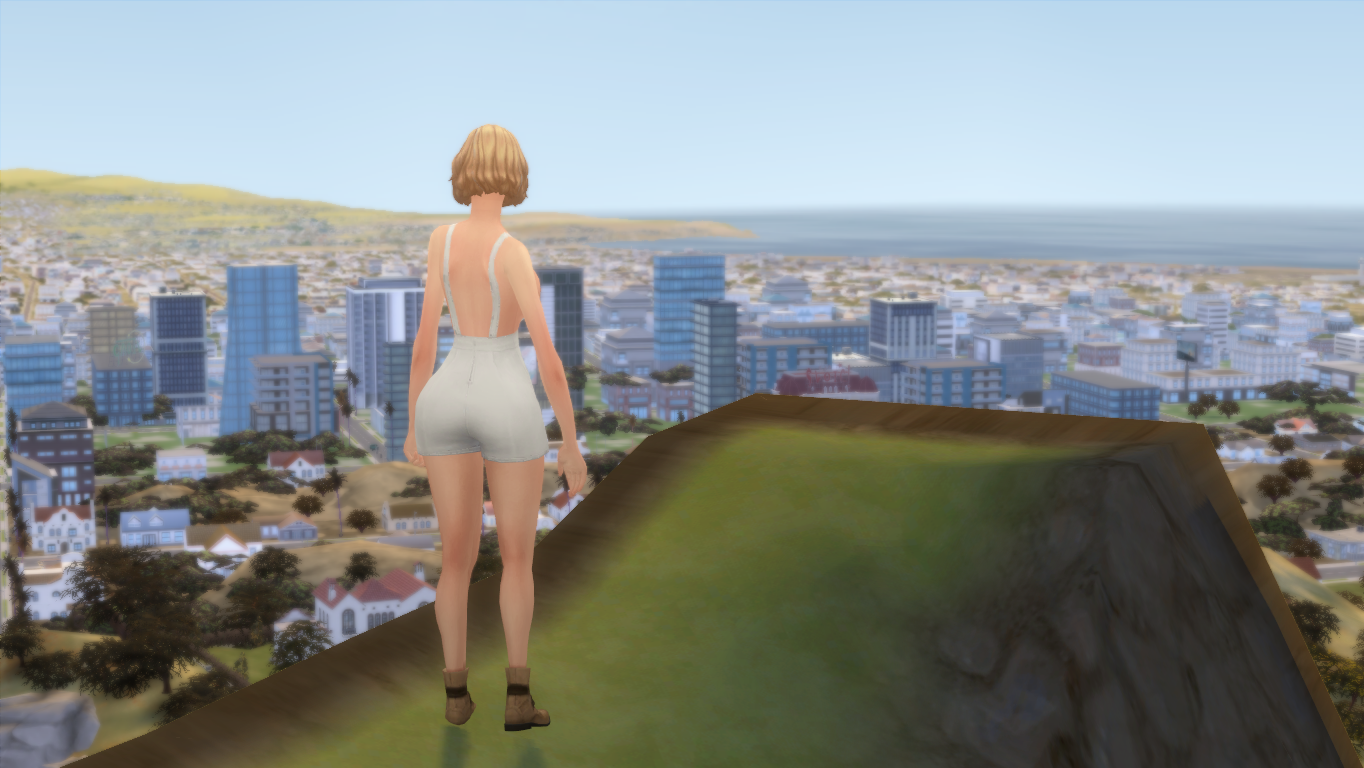 I have not done anything with "alpha" hair or skins yet.  I thought it couldn't hurt "widen my palette" and give it a chance, but I don't think it's for me.  Here is my Alpha Male. 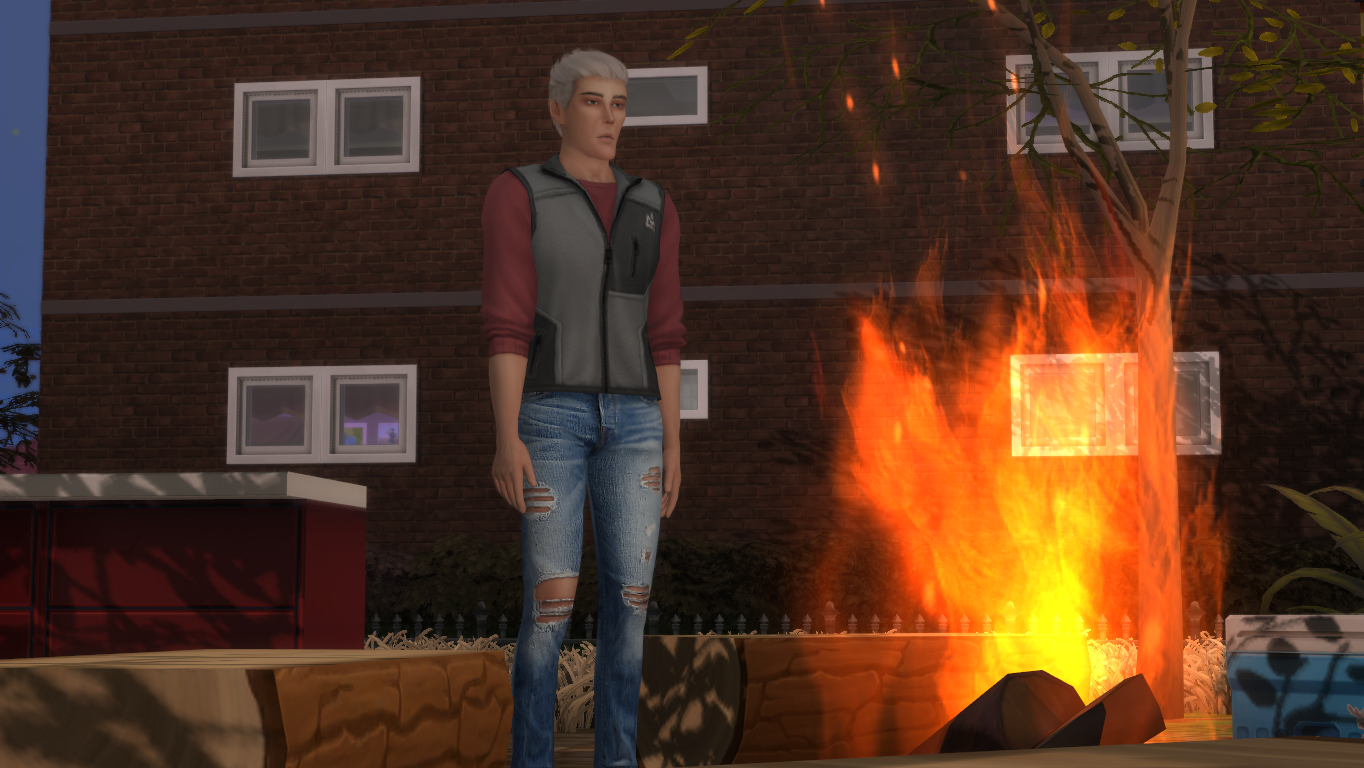 Meanie and Toodamn Jenkins meeting up in Brindleton for some dinner.  I can't play certain households because I love running into them by surprise.  The Jenkins family is one of them. 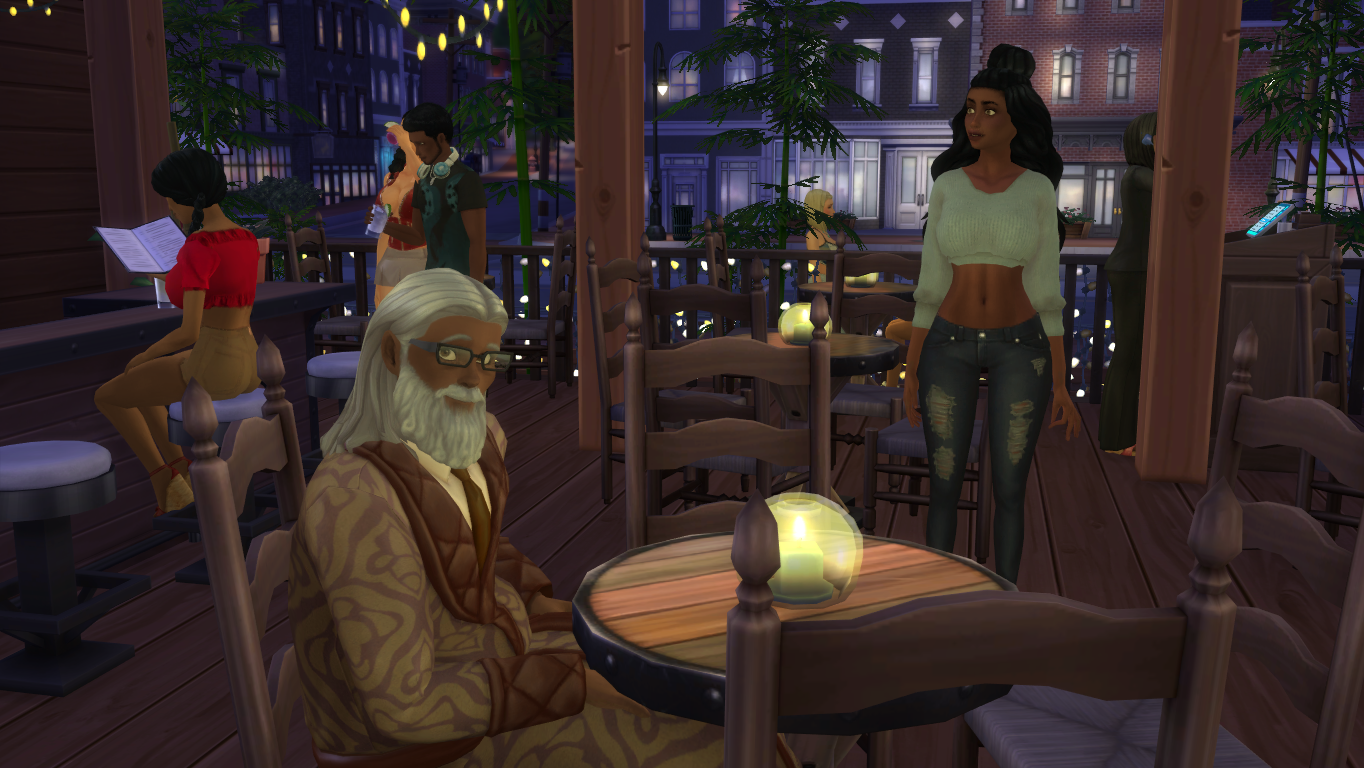 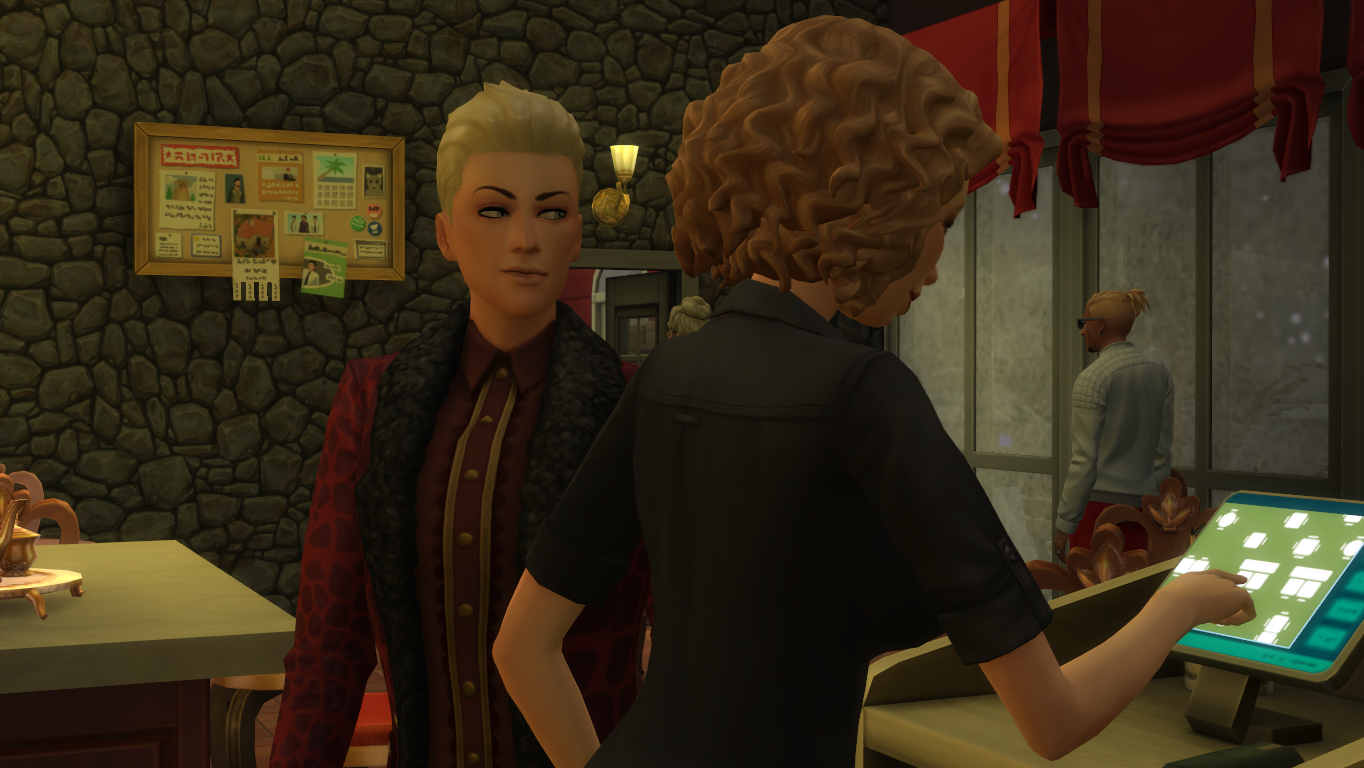 Here is another sim I enjoy, Rita Runewald.  I've been keeping her on a leash (not literally, wacko) so I can do some CAS edits and build up some of her relationships.  She doesn't know how to do any magic right now.  Outside the magic of lustful seduction, that is. 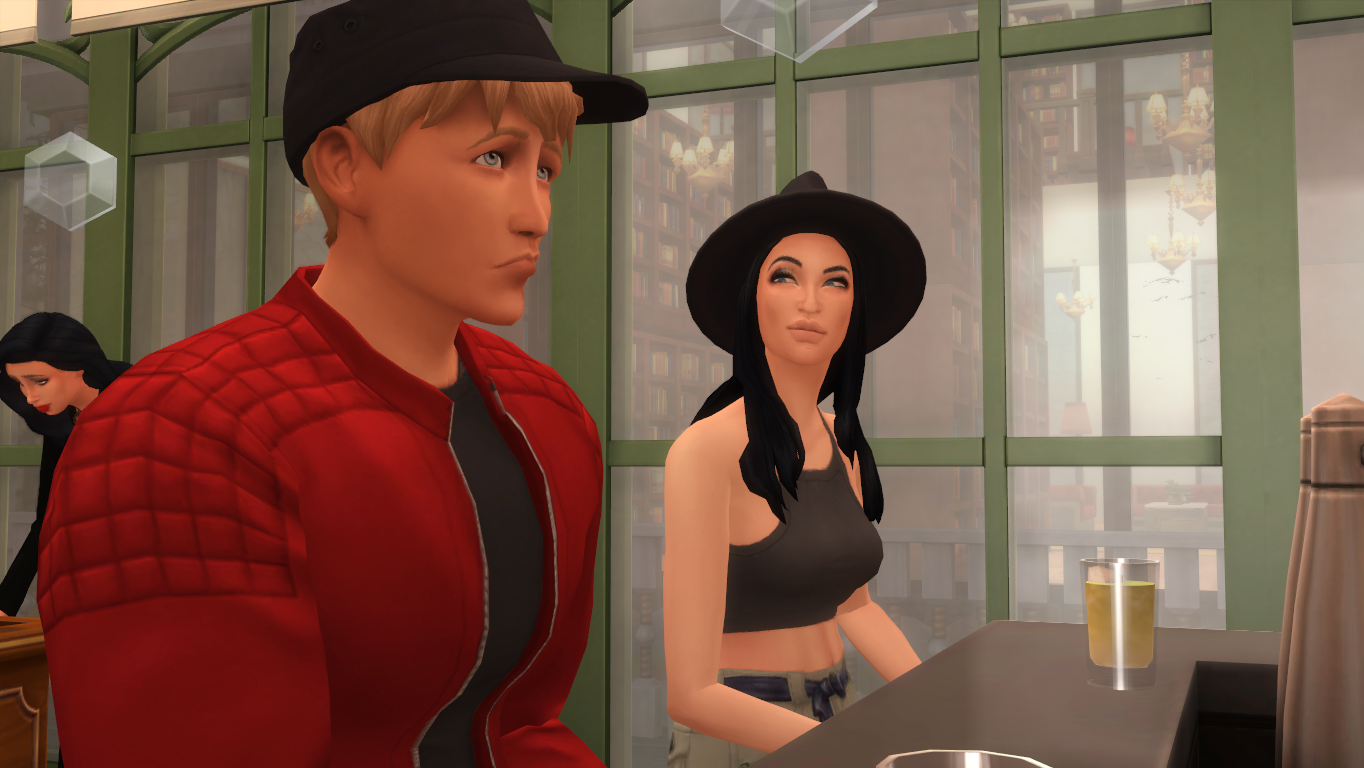 She's also a little bit goofy, and I like that.  Hide your boyfriend!

I saw Angus strolling into a restaurant I was working on with his brand new "celebrity status" aura.  I think he's still on a high from his legendary catch. 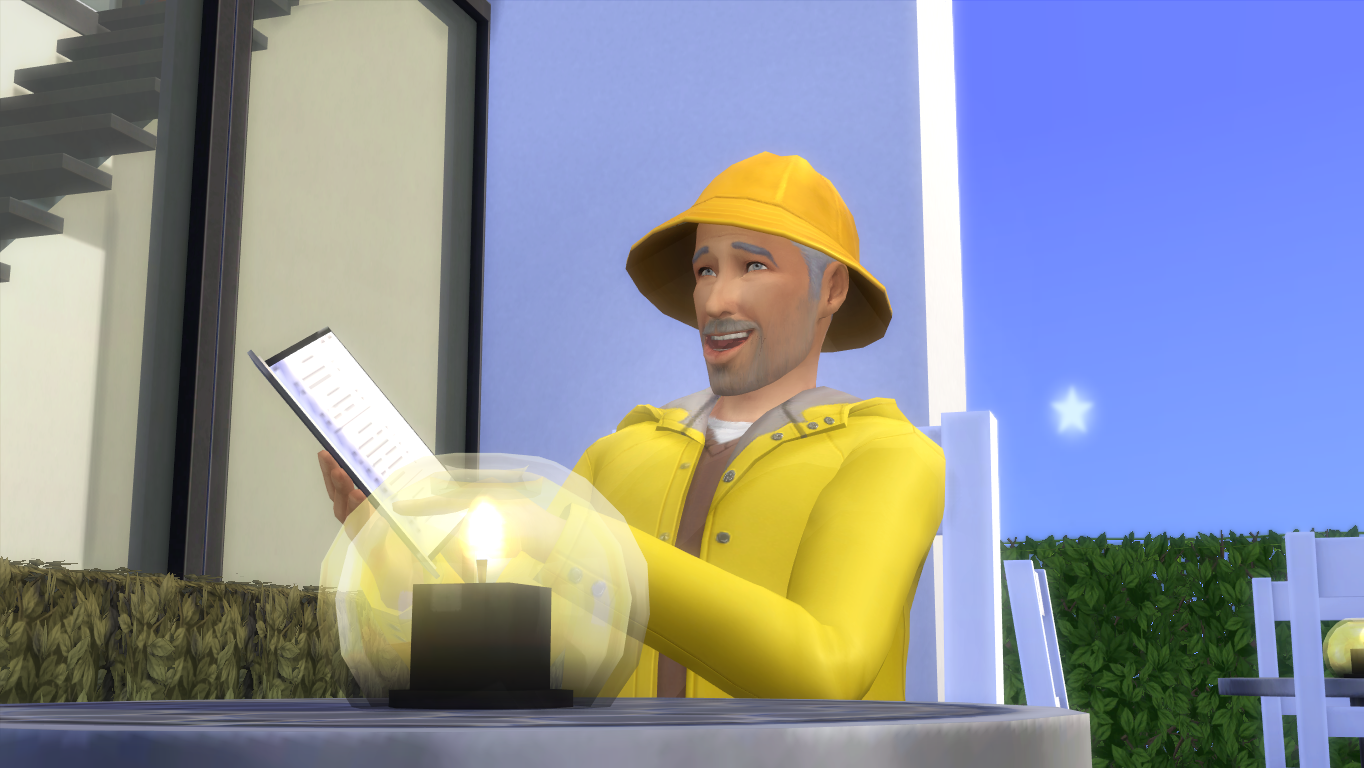 Once a reclusive fisherman, Angus' story has seen him thrust into the limelight.  And I have to say, he's taking it much better than anyone could expect.  Now if only he could get everyone to stop calling him "Thunder Gill" 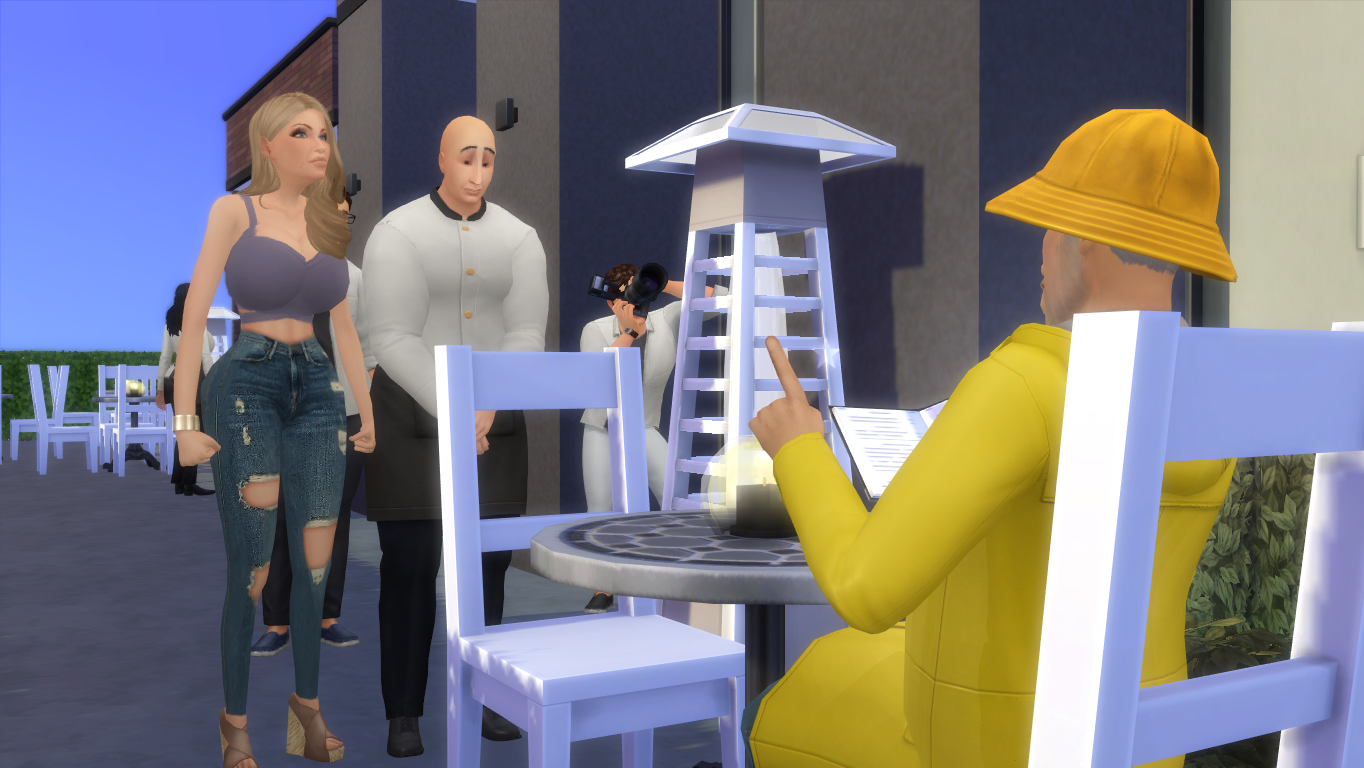 Speaking of celebrities, there isn't a nicer guy in the biz than this guy.  A little background, he spawned into my game as a criminal career sim.  After one randomly generated haircut I knew exactly who he was.  He was born again as Dude McDude. 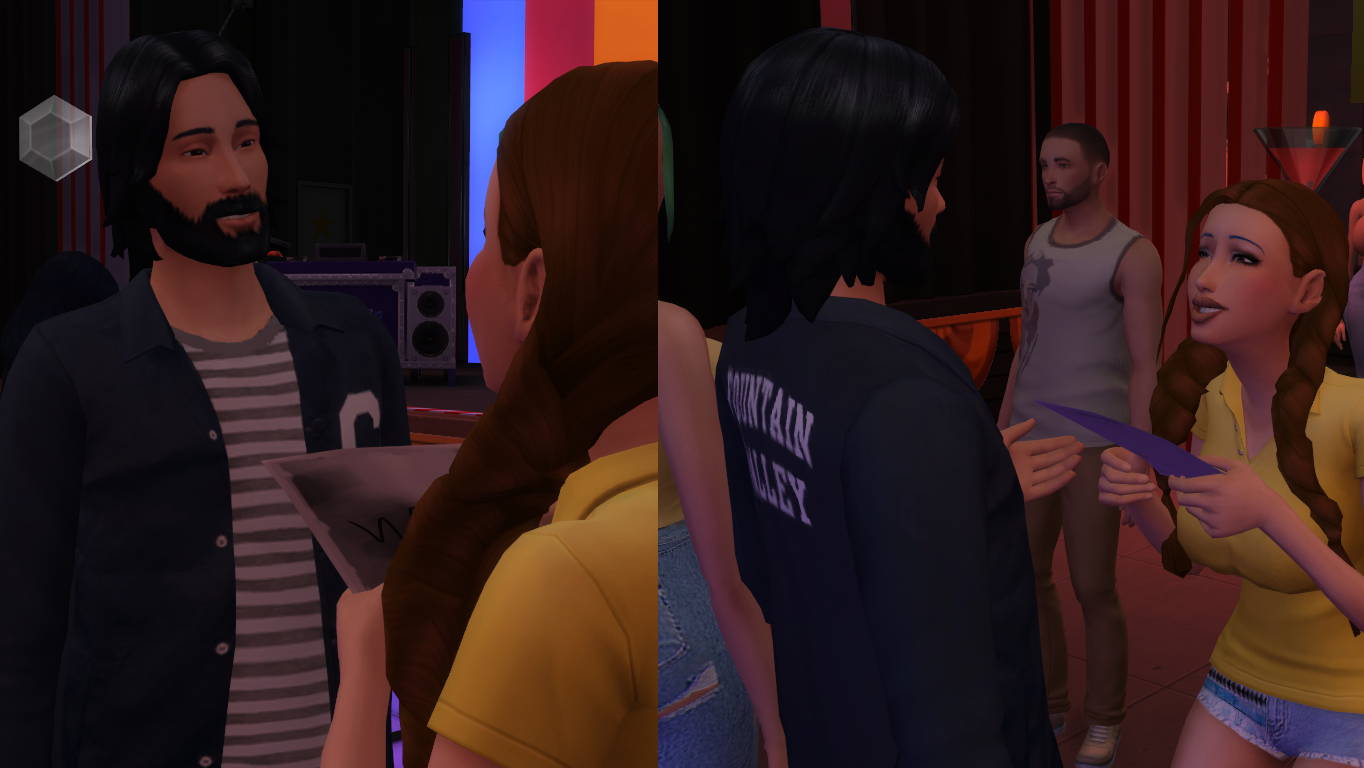 I have a couple of goofs to share with you here.  I don't know what really happened to this sim.  Maybe he's watching too much Stranger Things.  You know.  The upside down, get it?  Ok, I'll just see my way out.  Eventually. 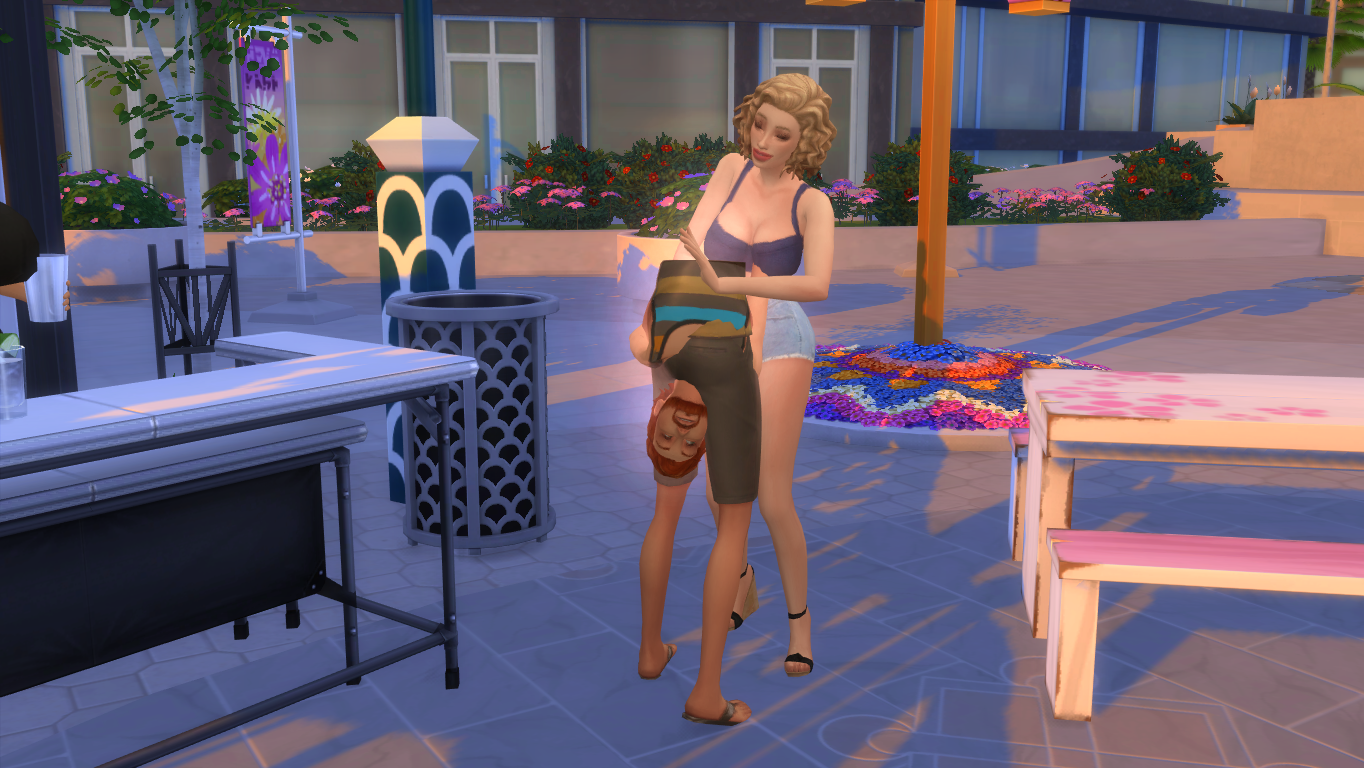 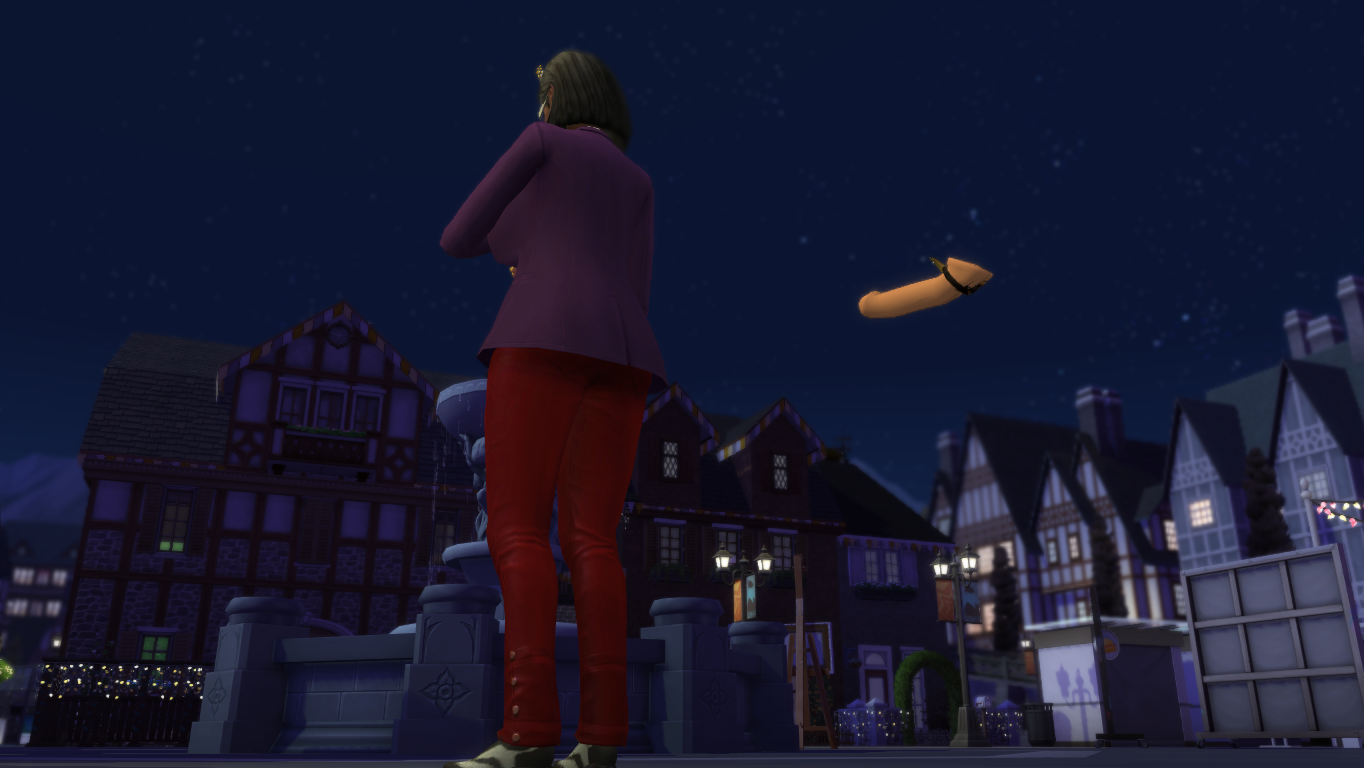 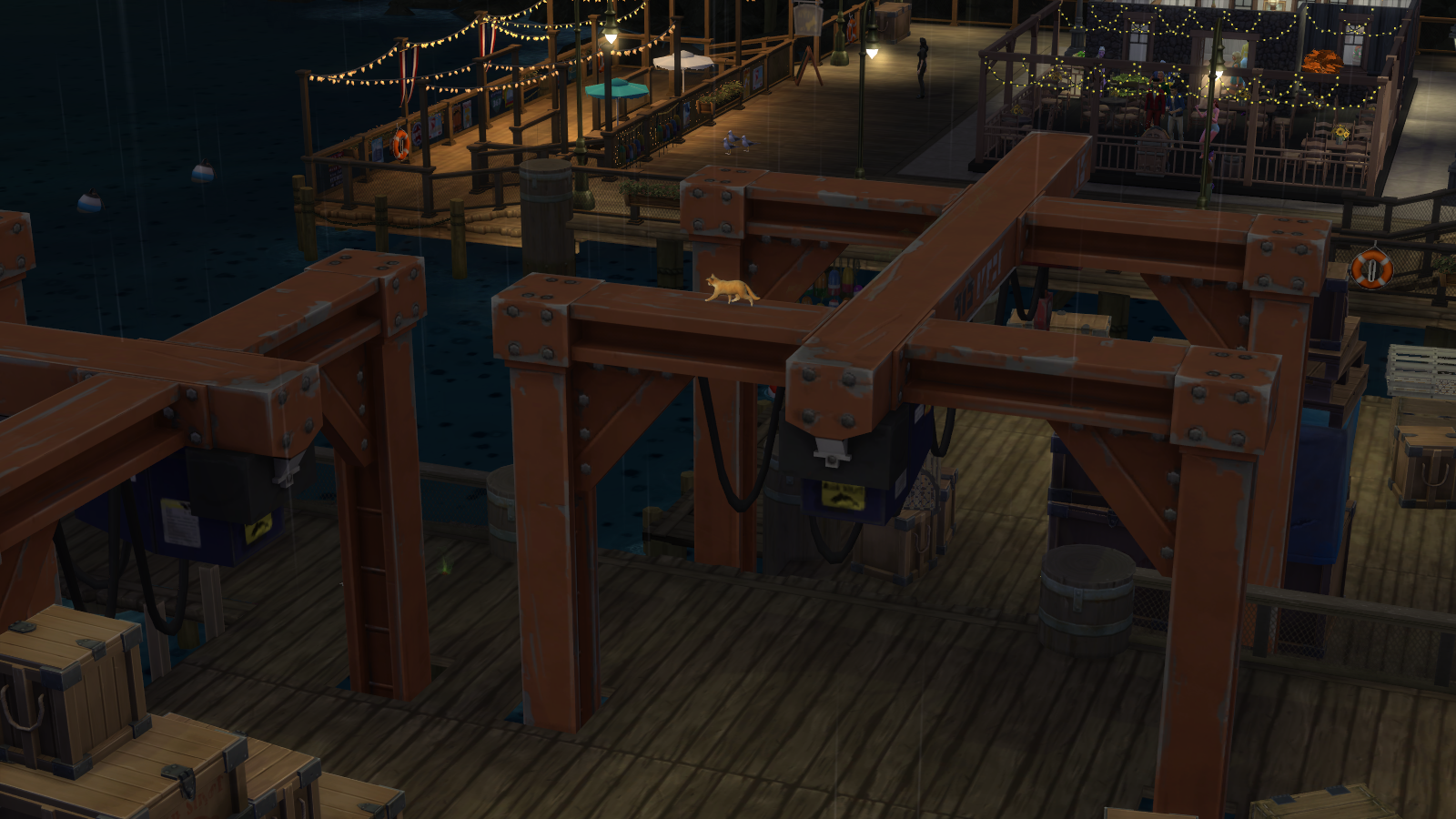 There's too much going on here.  So many questions.  Nobody but me will tell you this, but this is the final boss of the game. 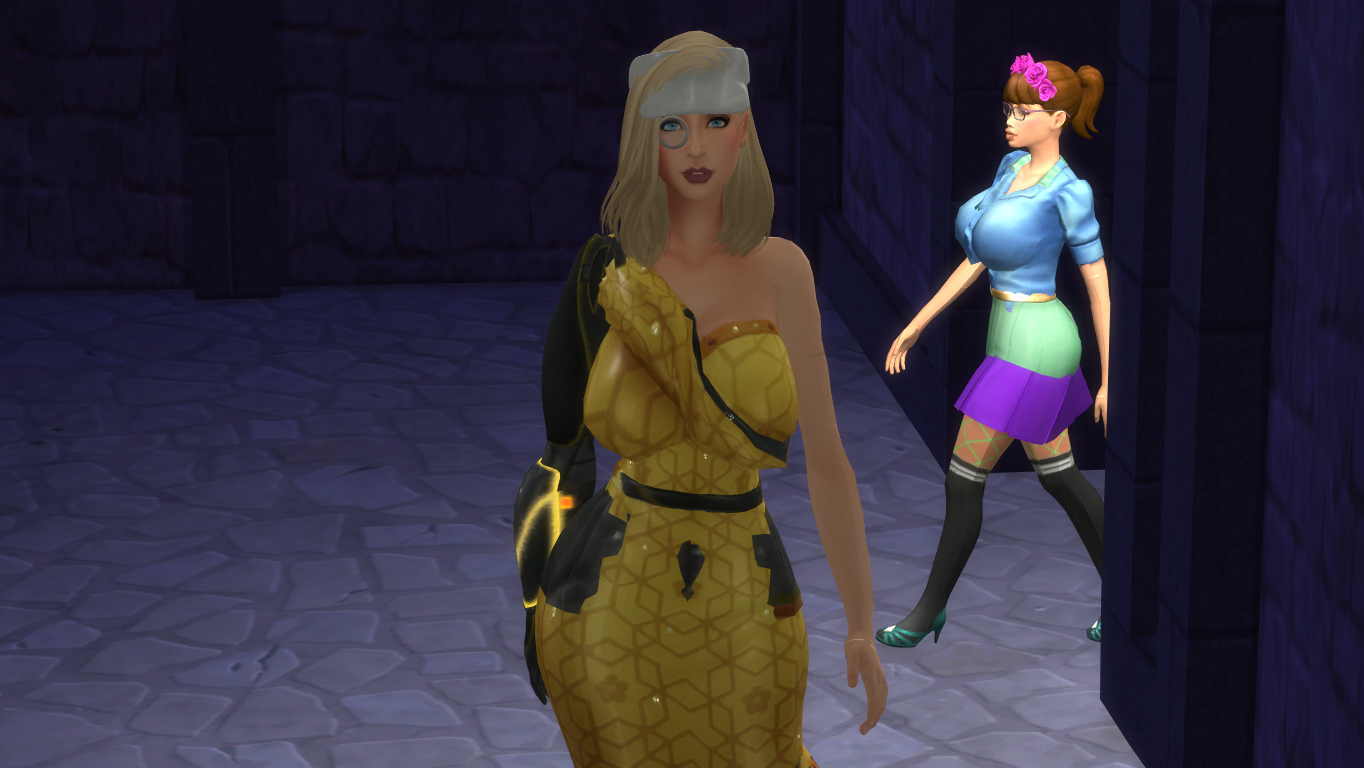 The last goof should be the most difficult to explain, and that's what this is.  We either have a game glitch, or a trolling god-tier sim on our hands.

There's the goofs,  I wish I had more to share with you, but my game is just so incredibly stable.  So stable that I've been too scared to update it for 5 weeks.  I just need to sign in and update some mods.  I'm working on it!

In the last picture post, I forgot to share some more spawn cheats.  Go ahead and try to spawn one outside the lot boundaries.  What do they spawn?  Try one and find out.  You can shift+click to delete them when you're finished.

That's it for now, thank you guys!  I'll see you next time with Battle Sims!

Can T.J. Von Fleek prove he's not a tool with a truly ratchet performance?

Is Jo Streety thirsty enough to drink from the sippy cup of victory?

Will the removal of popcorn leave Rondo in a big mood?

All this (and more!) on the next

Until next time, cheeseburgers! Keep the $100

[2020.07.03] Whew,  time really flies.  I hope you guys are still enjoying my files.  I logged into Mediafire to make sure all my uploads are still available for you all, and they are. At least to my knowledge.  I have been playing 3dxChat and that's what's really been taking up my time.  Would you all want a blog post hearing about my experience there?  Until I check back in.. be safe everyone, and stay slippery!

[2019.07.22] I'm all updated now.  And wrixles updated noblu worlds! That's the one I've been waiting for.  It makes the outdoors look really nice.  I also found out I could update this mod.  Tonicmole is awesome.

[2019.06.19] I didn't have room to demonstrate it, but the Miss Emission heels flash just like the other items in the outfit.  In case anyone was wondering

[2019.05.15] You're telling me you showered, got dressed, traveled all the way down here, just so you could stand around and watch the DJ?

[2019.04.29] I know people do not follow me for my shitty comedian status updates but if I keep something funny inside my body for too long... well, I don't know what happens. Maybe I get gassy? Maybe I shrivel up like a raisin?

[2019.04.25] LMS showed up in the comments and updated this mod, I'll have to give it a try again!  Various Seating Fixes/Additions Also, I started using NPC Control to replace Reduced Random Townies and it works great

[2019.03.18] dumbaby has released a leg length slider for free on their patreon. It's prettty good! It doesn't push your legs through the floor or anything, just raises the waist

[2019.03.15] AKLsimmer's mod is broken until they can find the time to sort it out.  I ended up pasting between 30-40 townies that were generated for a few of the game packs.  I'm just going to keep them and hope that's all the game needs for now.

[2019.03.08] Slowly putting things back in order. The wheel of destiny has returned to the "about me" section on the front, because I really need it. I'm very indecisive sometimes. Long live the wheel!

[2019.03.07] I've released the 2F Vault suit and Fallout accessories. Whether or not Fallout is your thing, I hope you will give it a chance. Thank you all, now go save some settlements (or make your own!)

[2019.03.01] I've removed the sidebar photos, they seem to not display properly when updating the page. It seems to be a recurring problem around the site after the downtime today. When I get back and the uploads are working I will have something to share 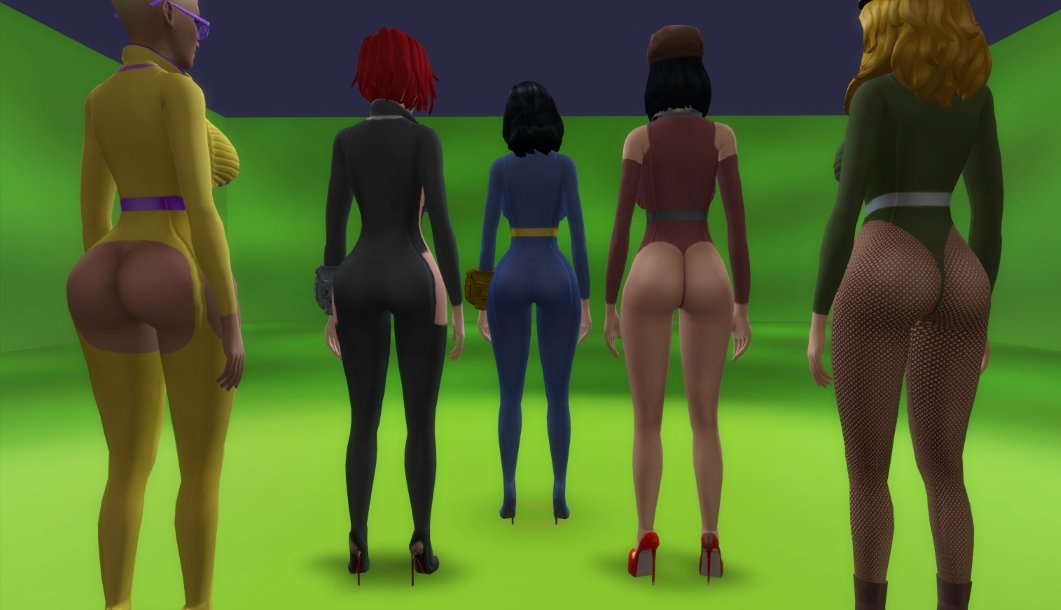 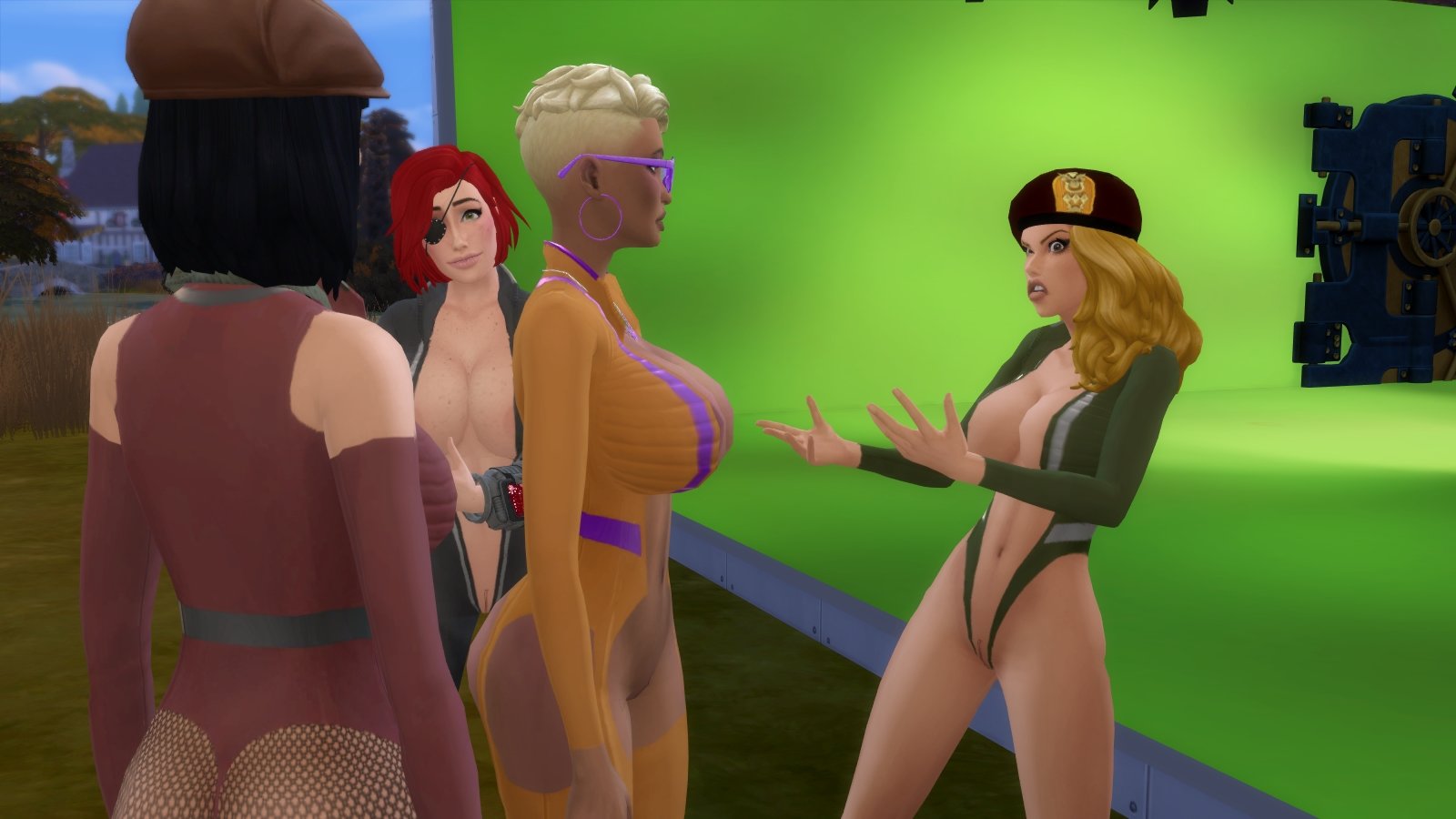 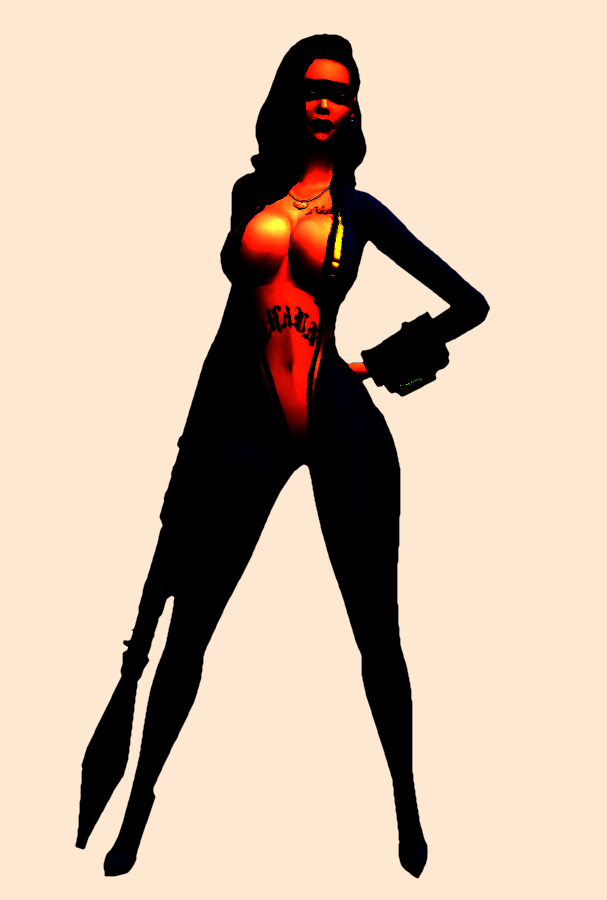 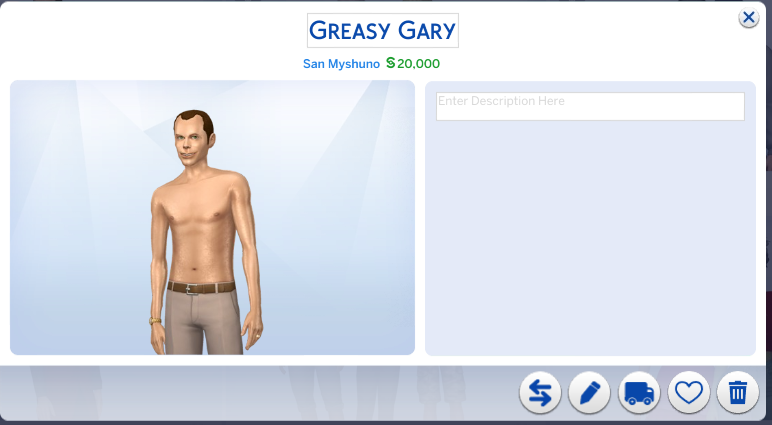