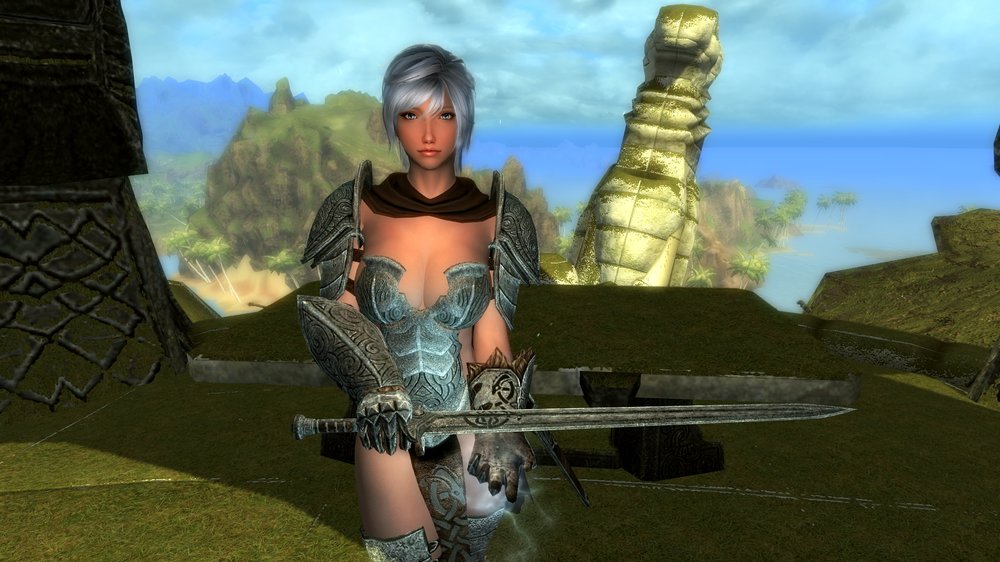 Just some shots of Mist in the Sovngarde Steel armour. Yes she can use magic she just prefers having a shield in her left hand but it's easier to find poses that work with magic than shields.

Also for those of you who know (or even care) Pokemon Go is having its 1 year anniversary and how are Niantic celebrating this anniversary? Buy selling us (yes SELLING) an anniversary box worth £10 (it costs 1200 of their in game currency) that has in it 6 incubators, 2 raid passes, 20ultra balls (you know, those things you can get for free from walking) and 6 Max Revives all in all you save 80 coins. Here's the thing Pokemon Go is actually a really shit "game" I was out with it on Thursday and over an hour and a half I had to restart it 23 times, it still has the bugs that were in it when it first released and now that they've updated the game with raids its gotten even more buggy with frequent GPS fuck ups, network errors and crashes (especially near the new gyms) there is no real incentive to give Niantic any sort of money right now. Now compare that to Nintendos OTHER top app, Fire Emblem Heroes which has been getting frequent updates and bug fixes, in fact I only had my first problem with it yesterday and all I needed to do to fix it was restart my phone, and when Intelligent Systems missed a bug (that wasn't even game breaking it was just a tiny bit annoying) they apologised and gave us 10 free orbs (the "premium" currency used to summon more heroes) and in addition to that they've been adding new heroes and new features since release whereas it took almost a year for Niantic to add generation 2 pokemon or any new features of any worth. Additionally the events in Pokemon go are pathetic, one person on reddit said that the events in GO are the sort of thing other games have as a weekend boost (like FEH and its double SP event every weekend) whereas FEH has had 3 seasonal summon events (the third is ongoing) giving you limited time units that may not ever be in the game again (or at the very least you need to wait a year to get) whereas Niantic give you Pikachu with a hat.

Sorry for the massive rant comparing Pokemon Go to Fire Emblem Heroes but the anniversary event in go has actually pissed me off. Also still looking for someone to turn either Storm or Mist into companions for me (I mentioned it here) if how I phrased the request the last time came off as dickish I apologise it was supposed to be self deprecating (as I don't know what the fuck I'm doing when it comes to modding Skyrim) also you can find the presets for them here. Just one thing (to ward off a certain individual who loves sticking companions and presets behind paywalls, not that he browses this blog) if you release them do it either on here or the nexus (preferably here) just in case other people would like to have them in their games.