I know I haven't posted in a while but I don't have as much free time as I did the last time I posted. Normally the blog will be updated at least once in a week. Stay tuned for the future chapters I really have a good idea for this story.

After Leandra rescued the Moth Priest and tamed her Gargoyle she went back to Castle Volkihar. 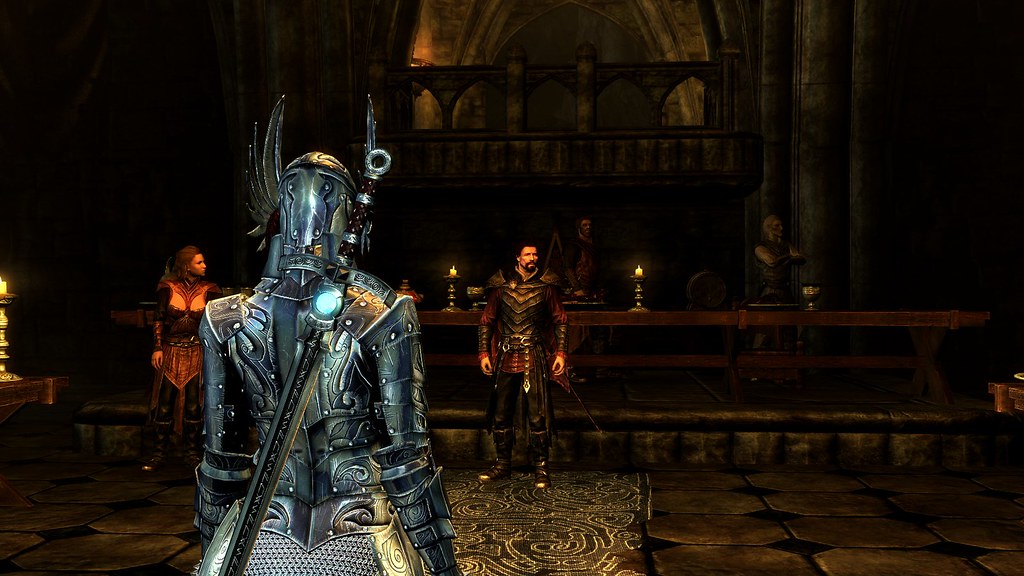 Leandra walked towards Lord Harkon. I have found the Moth Priest my lord.
Yes I see. Somehow I knew that it would be you who will find him. I also see you made him your thrall if you would be so good to command him read the Elder Scroll. Harkon said and smiled.
Leandra nodded and turned to the Moth Priest. Okay Dexion. Would you read the Elder Scroll?
Of course m'lady. He mumbled terrified and went into a corner of the room where more light was. 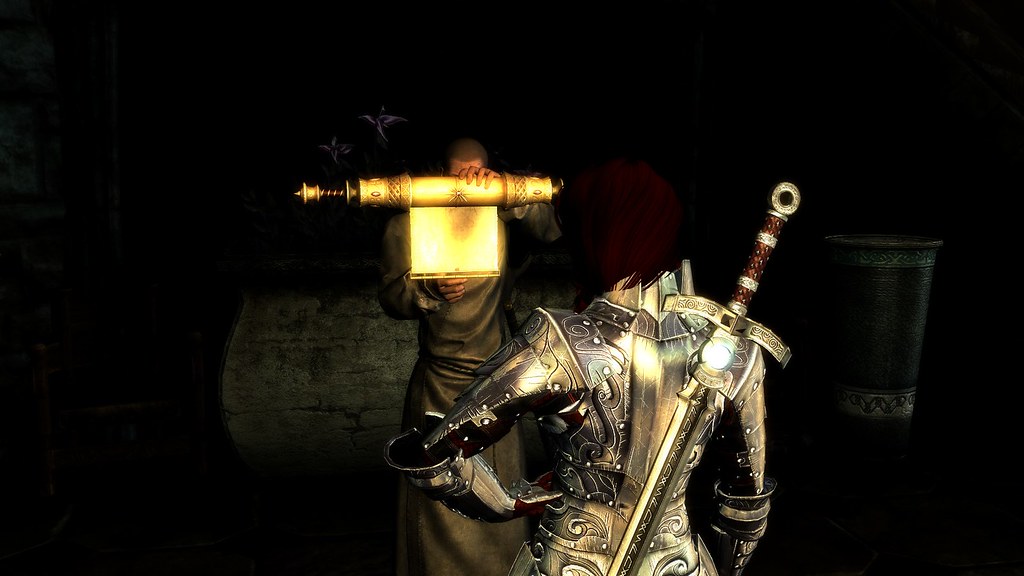 If everyone would be quiet please. I need to concentrate or I won't be able to read it. He told the vampires and pulled the sheet out of the Elder Scroll where the important words were written. I hear a voice it says that when dragon roam Skyrim once more a dread lord will rise and day and night will be as one. Now I see a weapon, a bow, I know it. It's Auriel's bow. The voice fades... but wait! There's more! To see the whole picture we need to have two more Elder Scrolls. One tells about the ancient blood and the other about the dragons. My vision fades and I see no more. He gave the Elder Scroll Serana. I'm weak and I must rest.
Well that didn't tell us anything, did it? Leandra asked.
No it didn't. Lord Harkon seemed disappointed. Spread out! Search for the other Elder Scrolls! Now! He ordered the vampires in his court and went into his chambers. 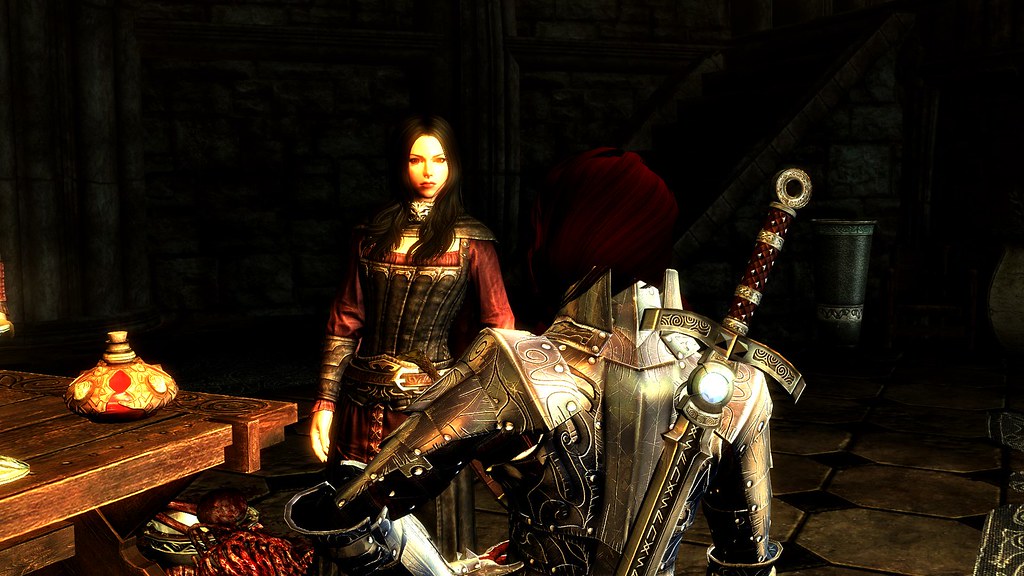 Leandra wanted to go and search for them as Serana approached her.
Hey, eer, I think I know who could have one of the Elder Scrolls. She scratched her head. My mother, Valerica. The only problem is that I don't know where she is. She said she would be there where my father would never search. Do you have any ideas?
Leandra thought about that. Maybe here in the castle? It would be too obvious for your father to search here and I think there are many ruined places where one can hide. She said.
Wait! That almsot makes sens! Come on we need to find her! Serana said excited and hurried outside the castle.
Leandra grinned and followed her, shaking her head. 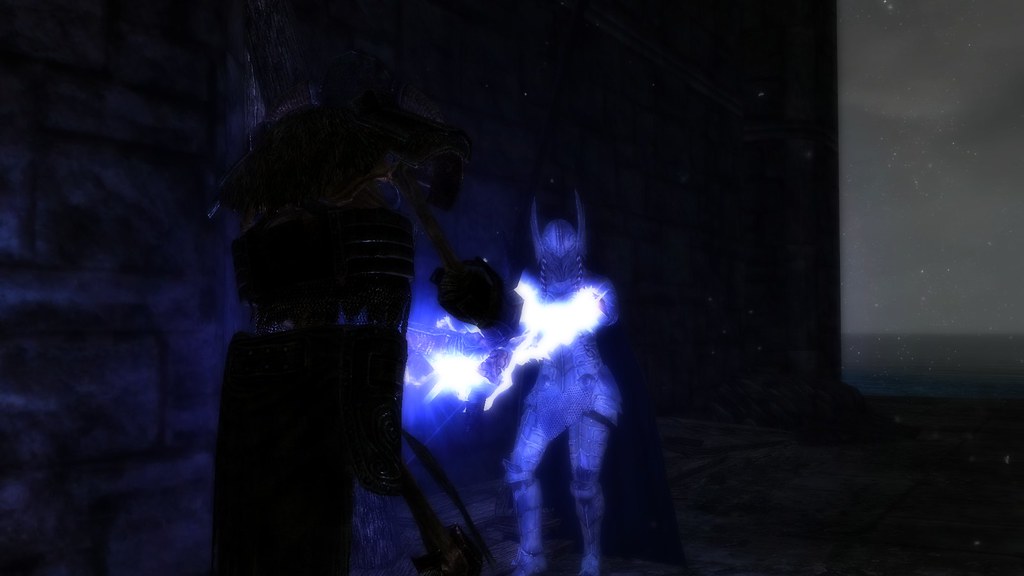 There. That's an old port. The previous owners got supples through here. My father didn't care for it. Serana said while fighting a skeleton.
Ah okay why do you know this? Leandra asked and casted a lightning spell upon a skeleton wich fell down, its bones now loose.
As a child I used to play down here. I know the way to my mother's garden like my pocket. She answered killing the last skeleton. 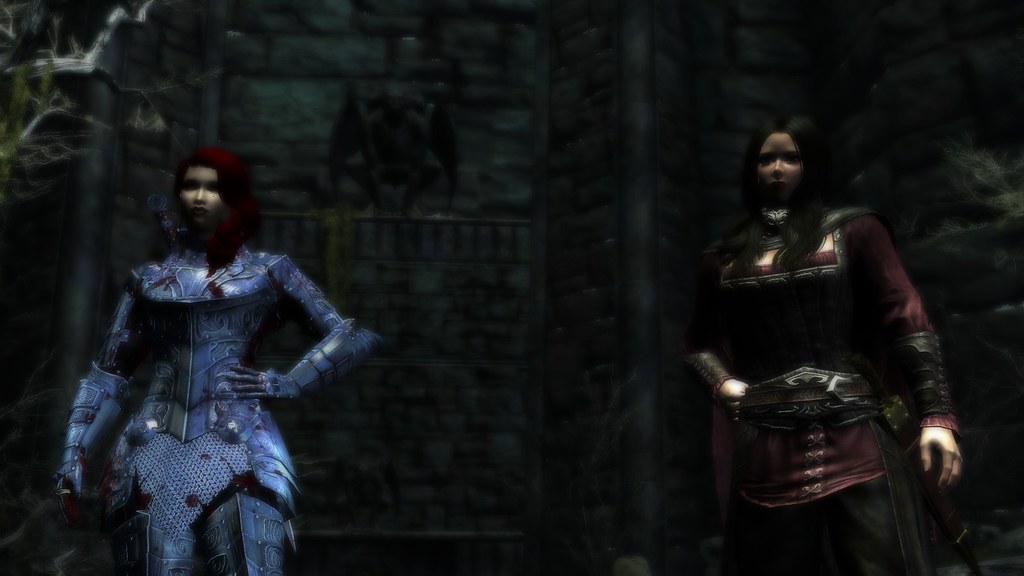 After a while they reached the courtyard.
What happened here? It used to be beautiful here! Serana's voice trembeled. My father ruined everything! Come on we need to repair this weired moondial. I think my mother wanted to tell us something when she removed the crests.
Leandra nodded and searched the missing crests. 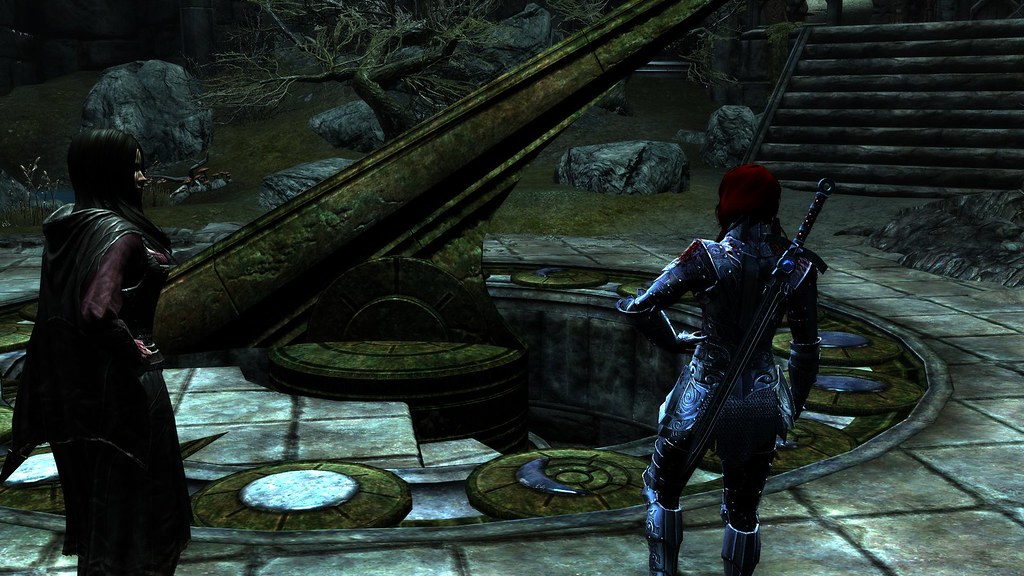 After she found them she placed the crests on their places.
What in oblivion is happening?! Leandra jumped back as suddenly the floor turned into staircase.
Not bad mother not bad... Serana said and went down the stairs. Are you coming or are you staying here? She asked nerved.
What? Oh no I'm coming. Leandra said and followed Serana in a new part of the castle. 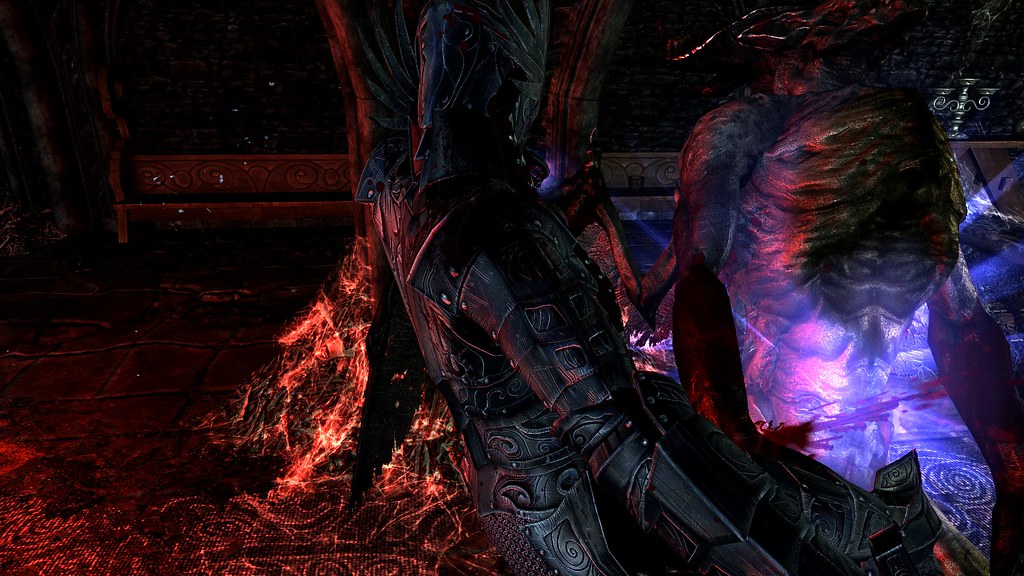 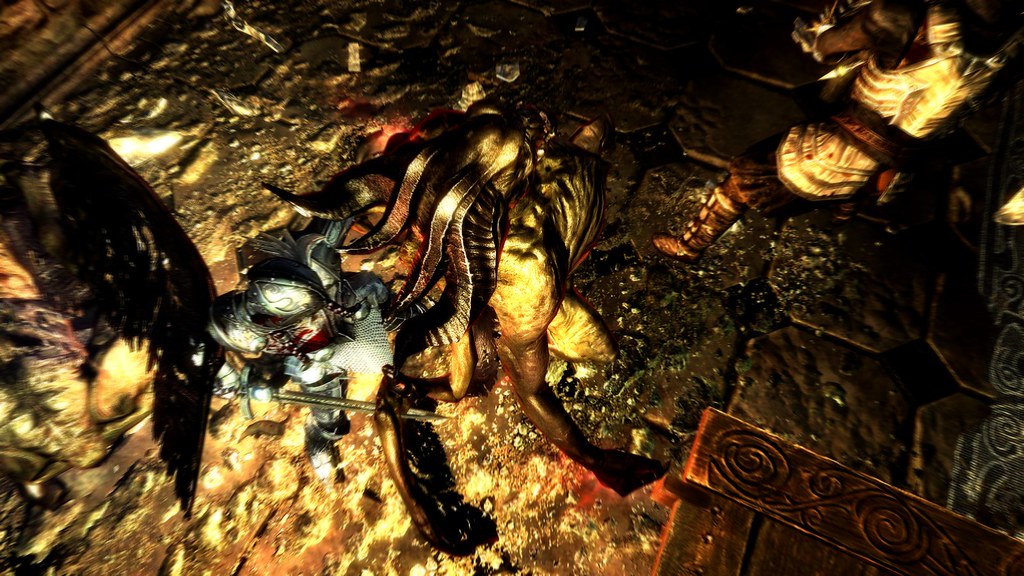 In this part of the castle where many gargoyles wich wanted to kill them.
Did... your mother k- keep gargoyles here? Leandra asked, panting.
No not that I know, but she was intereste in magical creatures. As she saw the expression on Leandra's face she had to laugh. No not what you're thinking, but I guess she "tamed" the gargoyles here. Otherwise she couldn't have gone back.
Leandra put her helmet on again. Okay I understand. 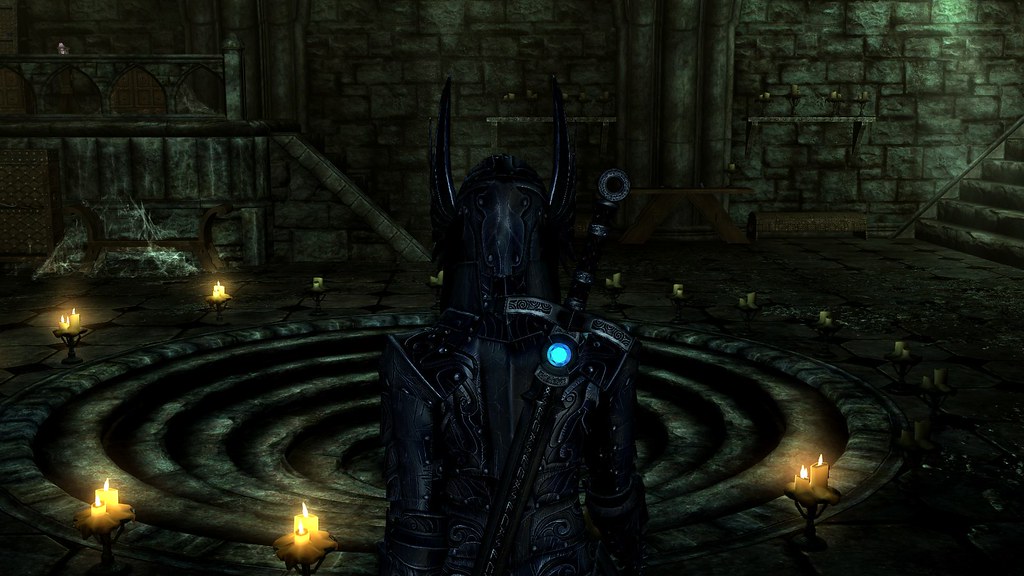 Wow what's that? Leandra asked as she saw rings on the ground in a large room.
It seems like some kind of portal but it's deactivated. Let's search for clues. Serana said.
After a while they found Valerica's journal.
Okay it's a portal to the Soul Cairn. Serana told her. The ingredients are here but she also added a bit of her blood. Seems like we're stuck.
But you and your mother have the same blood. Well at least a bit. We could try it. Leandra suggested.
Yes we could. Serana said and went to a vessel where they could place the ingredients. 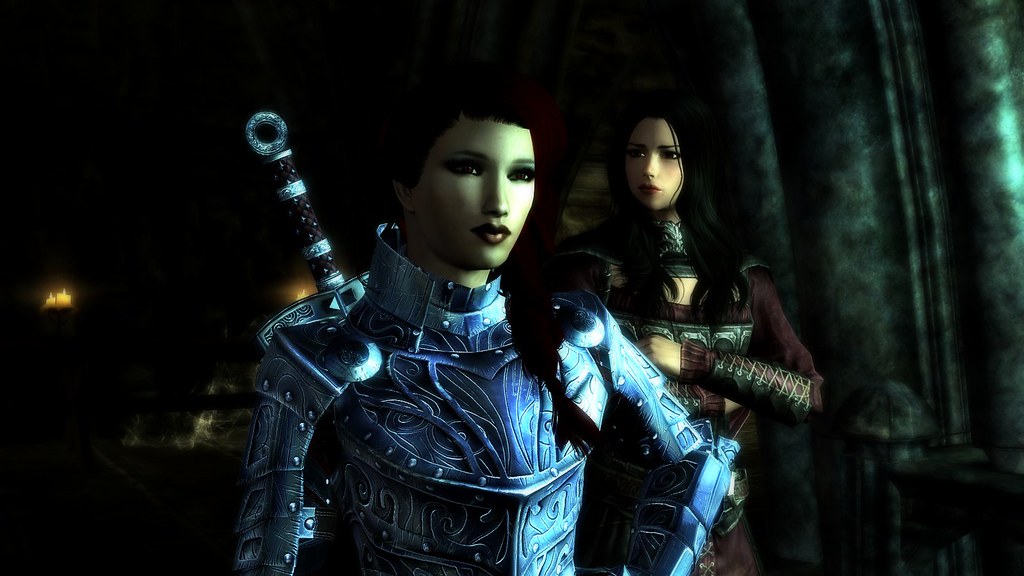 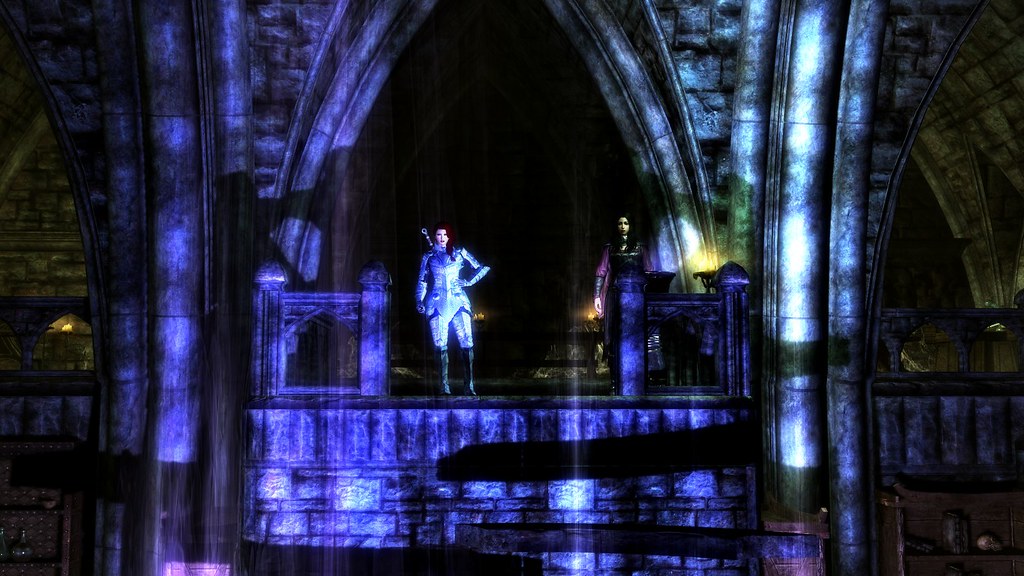 As soon as Serana added her blood, the portal opened.
Wow I don't know what to say... Leandra was frightened and excited at the same time.

I hope you enjoyed this chapter! If you have any feedback let me know.