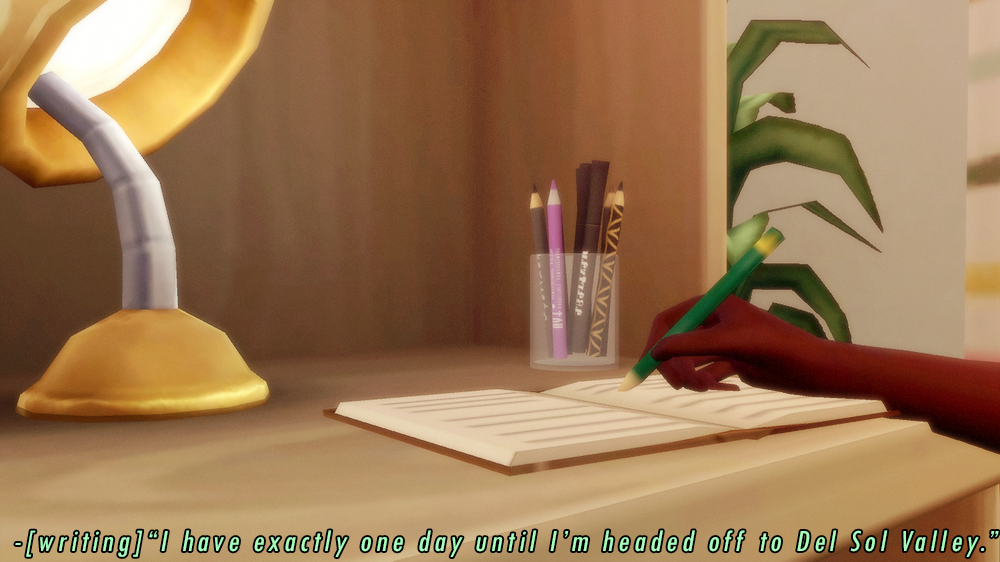 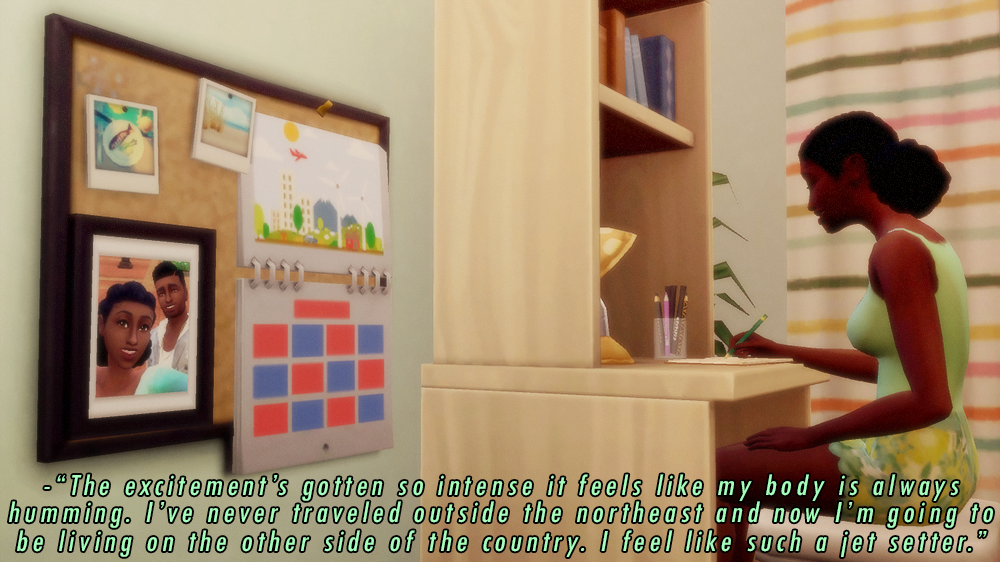 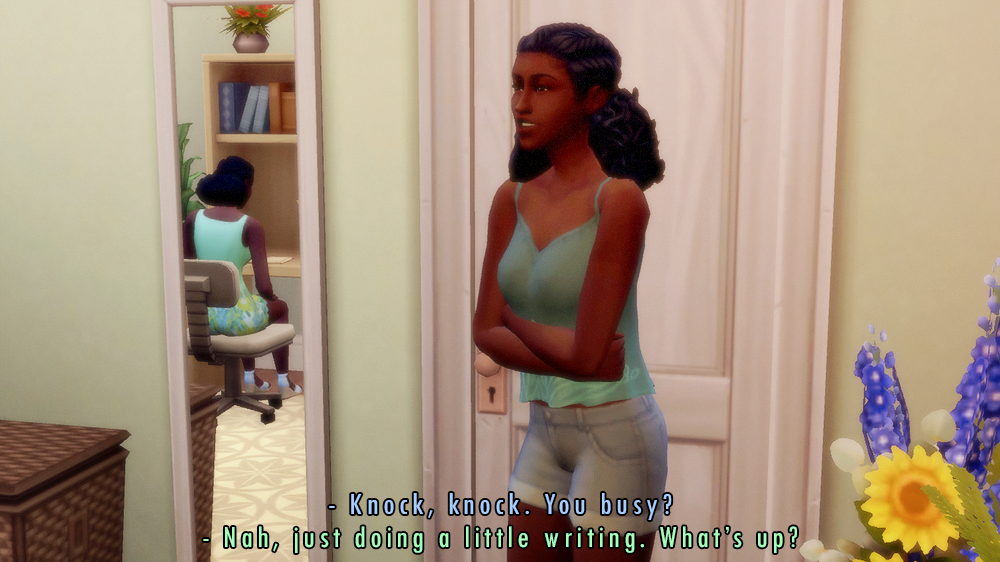 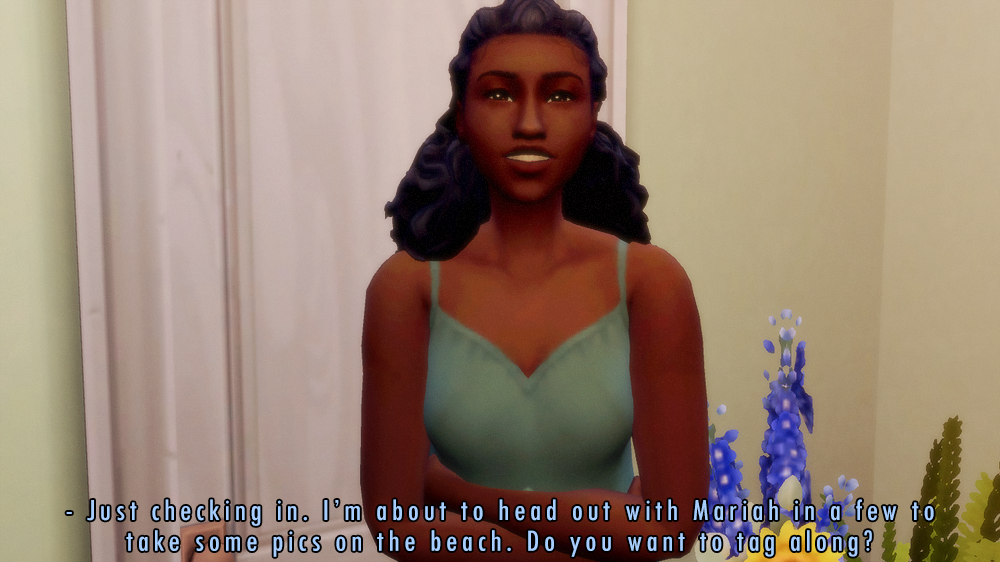 The light ‘tap, tap’ on my door frame broke my train of thought. I looked up to see Indigo already closing the door behind her. Even though we’d lived in separate bedrooms for several years now, she always managed to make herself right at home in mine. I was convinced she’d developed some type of twin separation anxiety. It was surprising she hadn’t been the one dreading our final days under the same roof.

I’d been holed up in my room for most of the day, packing my remaining possessions into my carry on so I’d have easy access to a fresh set of clothing once I landed. My flight was tomorrow evening. I was in for a 6-hour journey split between two connecting flights which would land me in Del Sol Valley early the next morning. The last thing I wanted to do was roll into my first resident meeting looking wrinkled and crusted over. Once I’d finished that, I had nothing left but time to kill, so I’d pulled out my journal and wrote for a while. I hadn’t been picking up the pen nearly as often lately despite the free time I had after graduation. It felt like I was repeating the same thing over and over; I’m leaving, I’m leaving, I’m leaving. The reminder made me feel sick. Now that the day was upon me, I couldn’t avoid those feelings any longer. Yes, I was leaving, but I would be made the better for it; I had to believe that was true.

Indigo sat on my bed and peered over where I sat at my desk.

Indigo: You’ve barely left your room all day. I’m sure some fresh air would do you some good.

Indigo: Mariah will be pissed when she hears you “passed” on hanging with her.

Ivy: I just saw her yesterday. And I honestly don’t think I can beat that emotional ass goodbye.

Indigo: I can’t believe she cried. I’ve literally never seen Mariah cry since we met her in sixth grade.

Ivy: [smirking] She cried for me. Twice. Yesterday and like two years ago when that asshole Jerome cheated on her.

Indigo: Wait, he cheated on her?! She told me they split because he liked eating his toe nails.

Ivy: I think that’s true, too. Anyway, clearly we see who the more beloved twin is.

Indigo: Well, I’ve got all semester to change that! Mariah won’t be able to escape me when she’s sleeping 6 feet away from me.

I went back to writing in my journal. Indigo sprawled back on my bed, the faint chirp of birds outside my window and the scratch of the pencil against the paper the only noise for a while.

Ivy: Yeah, of course. Why wouldn’t I?

Indigo: Well, you’re not always the most communicative when something’s wrong. If it weren’t for Noah, sometimes I wonder…

Indigo: If we’re gonna lose you, too.

I spun around at that. Indigo looked back at me with a measured look in her eyes. She hadn’t meant any harm; she was just talking in her normal stream of consciousness. It was different that the careful way I chose every word before I spoke. Regardless, there was an honest concern there that I had to address.

Ivy: Indi, I know I’m not as…open lately. But it’s just the stress of the move. I mean, our entire lives are about to be turned upside down.

I joined her on the bed and took her hand in mine.

Ivy: I’m…sad. We’ve been together literally from the start, and now we’re not even gonna be in the same time zone. We’re gonna miss so much of our lives. But…if I ever felt like…it was weighing too much on me…you have to know I would tell you. You’re more than my sister. You’re my best friend.

Indigo smiled at me. She nodded her head and sighed.

Indigo: I know. I just have to check, y’know. Can’t let my little sister fly under the radar.

Ivy: [chuckling] Little sister? I was born 6 minutes before you.

Indigo: Are you sure? I always thought that was me.