I am on an extended break! I'm sorry I can't work on this mod for the foreseeable future, I give permission for anyone to take this mod and use its assets to update it as long as I get some credit <3

State of the mod:

This mod isn't compatible with the latest version of Stellaris! Expect an update in mid Feb

As some of you have realized this mod hasn't been updated since the latest expansion of Stellaris! As I've stated in the forum I've been busy but I intend to pick up work on this mod again so I hope to get an update out by mid FEB (IF I CAN FIGURE OUT ALL THE ISSUES)

If you still want to play this mod before I update it (which will take some time) you can role back your Stellaris version to 2.1 by right clicking on Stellaris in your steam library and clicking properties then selecting betas and choose 2.1.3.

THANKS FOR YOUR PATIENCE!!!

PERFORMANCE OVERHAUL, MASSIVE REDUCTION IN LAG FROM PREVIOUS VERSIONS. The interbreeder events have been rewritten from the ground up to be significantly more performance friendly! For more details check out the full change log in the mod description!

Just a heads up I changed allot in this version and although I tested it quite a bit and found no issue there will likely be some minor bugs so tell me what ever needs to be fixed and give me your opinions on the balancing of the "balanced version". If you wish to roll back there is the legacy file including all past versions. Go ahead and send me any suggestions you have for the mod

-4 types of interbreeder, play as a brood parasite and use xenos as incubators for your eggs or play as an all female (or male) race and interbreed with xenos to make the perfect hybrid and more!

-Special events for each interbreeder type

-If your founder species has one of these interbreeder traits, you will receive bonuses as the number of species in your empire grows

Create the ultimate sex crazed empire, bent on dominating (or submitting to) all other xenos in the galaxy! Play as a species of brood parasites and use the xeno scum as incubators for your young or as out of control bio-mechanical sex machines and fuck the xeno meat bags into their place, or even as an all female race of xenophiles and interbreed with xeno men to create the perfect hybrid and more!

This mod adds several species traits, leader traits and interbreeder traits along with their own events which allow you to breed with xenos and create hybrid species or to fuck other species into extinction through the need to breed gameplay mechanic.

Tip: Make sure you start the game with syncretic evolution otherwise none of your pops will be able to grow without a compatible species!

This species lays its eggs in unsuspecting xeno females. This will cause a general fall in the growth speed of other species and a fall in happiness unless they are xenophiles in which case they will experience a rise in happiness but a higher drop in their growth speed (since they'll be much more willing to become brood hosts). Though biological brood mothers can be substituted with robotic pops who posses artificial wombs.

Advanced biomechanical technologies allow robotic pops to impregnate biological females with sperm which combines nano machines and biological DNA. This technology removes the need to construct large factories to produce robotic pops reducing cost and increasing build speed. They will also cause a general fall in growth and happiness of other species unless they posses bio mechanically optimised wombs in which case they will experience both an increase in growth and happiness.

This all female species requires xeno genetic material to breed and birth males of the fathers species and females of the mothers species which causes a rise in happiness and growth speed of other species. There is a chance that they will birth a hybrid. You may also breed with dangerous xeno wild life if you research the appropriate technology, but beware there may be consequences! All leaders from this species will be female! Unless the appropriate policies are set this species will out breed other female xenos leading to all male pops who will become dependent on inter breeders to propagate.

Species with intercompatible sperm must impregnate xeno females and only produce males of their own species. This causes a fall in growth speed of other species. There is a chance they will birth a hybrid. All leaders from this species will be male! Unless the appropriate policies are set this species will out breed  other male xenos leading to all female pops who can no longer propagate.

-If your founder species has one of these traits, the more species you have in your empire the faster your pops will grow

Become a sex crazed zerg swarm, perfectly designed for rapid breeding and sexual dominance. Claim the females of other species and prevent their males from impregnating them, exterminating their species through sex. This requires the addon file in the downloads section and also requires you to select the "Need to breed" species trait. Essentially how this works is any pop who lives on the same planet as a species with the "need to breed" species trait will be killed. The need to breed trait also lets you use the "fuck fest" planetary edict, giving a huge population growth and unity boost, and the "sex crazed expansionist" empire edict massively reducing the cost of ships among other things. Though the "need to breed" trait comes at a significant cost to research ability so you must capitalize on your huge early game advantage.

-fixed interbreeders being able to make hybrids with robot pops

-fixed all female event not triggering because I forgot to put them in the on_actions, oops

-Added 2 new traits all female and all male to be added by the previously mentioned events.

-Lag is fixed, finally! (turned out it didn't completely)

-GERMAN TRANSLATIONS BY ABOMINOUS (THANKYOU SO MUCH!!!)

-Big changes in balancing for the balanced version, basically made the traits less over powered. If you still like the over powered traits the original version is still op!

Includes German translation made by  Abominus! Thanks so much!

-Need to breed species trait increases growth speed massively at the expense of very low science output. If the optional sexual traits addon file is downloaded your species will claim the females of other species and kill neighboring pops on planets and has a chance to instantly replace that pop with a pop of your own species.

Just extract the sexualgameplay zip (choose either the balanced or original versions) and then move the sexualgameplay folder and sexualgameplay.mod files into Documents\Paradox Interactive\Stellaris\mod and activate the mod in the start screen. Do the same for the sexualcraze addon file if you'd like to enable the "need to breed" game play mechanic if you want to stop species with the need to breed trait from fucking everything to death just don't download this file.

This mod should work fine with old saves, even ones with older version of this mod, but there is one redundant static modifier that may or may not appear on your pops, these can be removed by opening the console command and typing "event debug.1" and this should remove the modifier from any pop who might have it. This only needs to be done once.

Please tell me if there are bugs and what ever suggestions you have!

I plan to add civics which enable story lines for each inter breeder type that I hope will extend into the late game. I plan to have various gameplay mechanics attached to these story lines that will provide an interesting tactical challenge.

If you'd like to change the effects or trait costs just go to "Documents\Paradox Interactive\Stellaris\mod\sexualtraits\common\traits" then  you can open the sexualtraits.txt file and play around with the numbers. If you want to edit the interbreeder traits you have to adjust the sexual_static_modifiers.txt as well which is found in "Documents\ParadoxInteractive\Stellaris\modsexualgameplay\common\static_modifiers"

After entering the seuxaltraits.txt change the trait cost to 1000 or some other high number, then follow the instructions from this link: https://www.reddit.com/r/Stellaris/comments/5bgr3u/so_did_anyone_make_a_fix_for_the_needless_and/d9opou5/ which will enable you to have empires with unlimited triats or just use the console command to add the trait

If anyone would like to make a translation just send me a pm and I will credit you and include it in the downloads section!

I figured out how to make the "Need to breed" gameplay mechanic by reverse engineering the infective mod by Pants_Doe, check the authors mod on steam! It is outdated however. @mk40 made the icons for the negative traits and @Raana defined their stats as well as improving the descriptions for several other traits.

Thankyou to @wolfiespring for helping find the cause of the lag issue and to @Yegie for spotting an error with the leader traits!

The art work is from the following artists:

I kindly ask you guys not to post this mod anywhere else, there is already someone who is uploading several authors work on the workshop, if you guys have the time it would be nice if you could all report him.

If you'd like to use any of the files in this mod go ahead and PM me, I'll probably say yes I just want to know which mod will be using my mod so I can enjoy it too . Also give some credit please 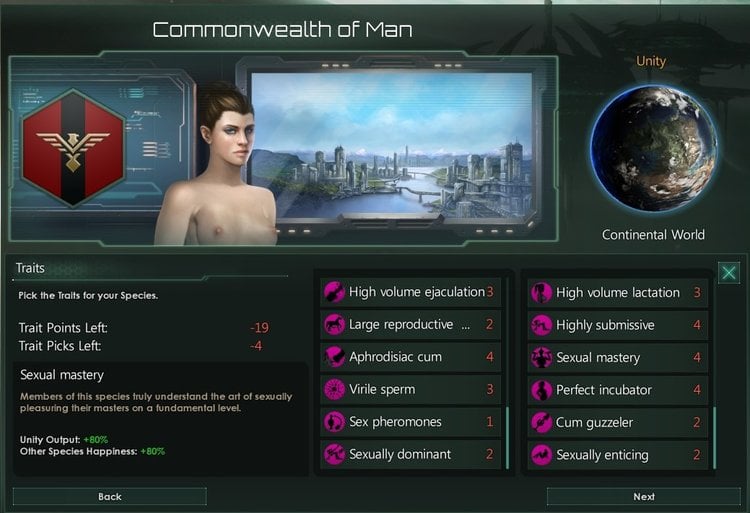 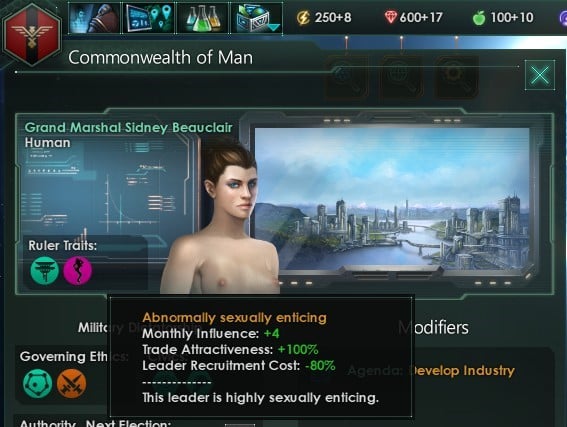 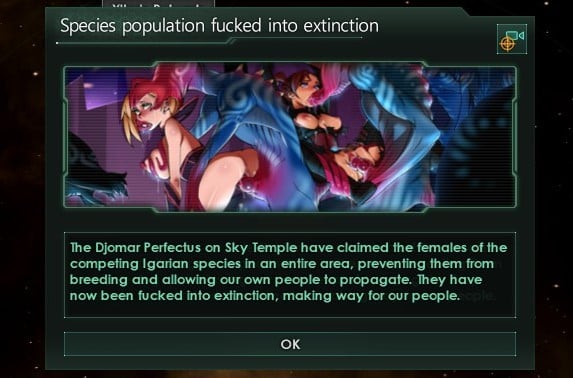 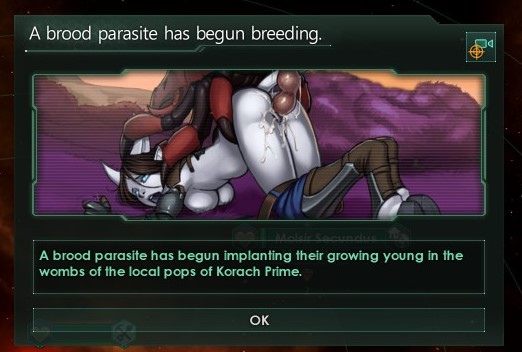 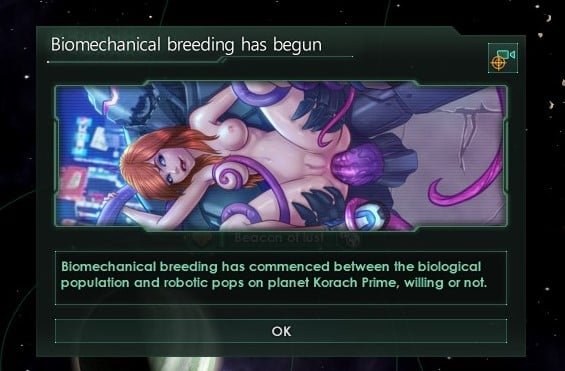 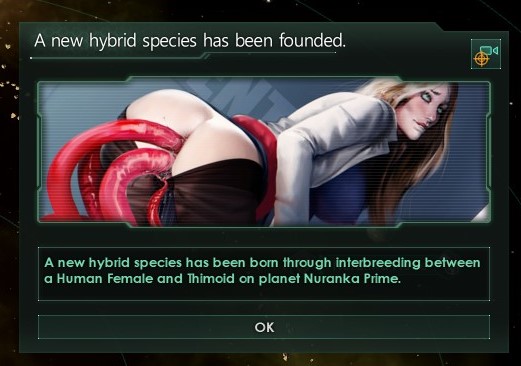 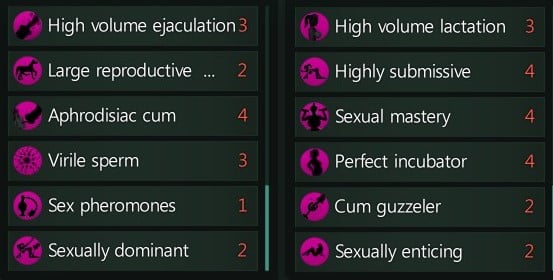 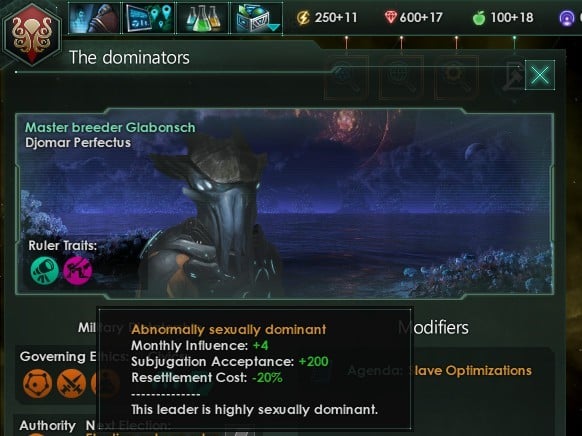 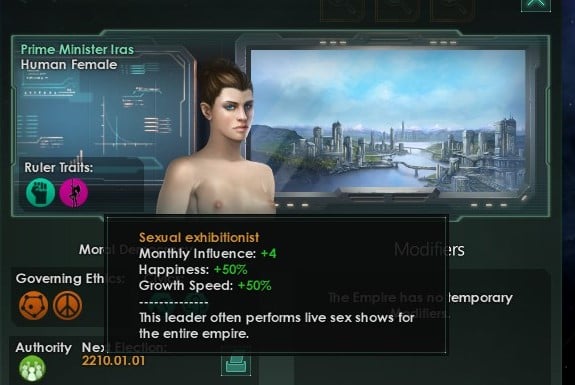 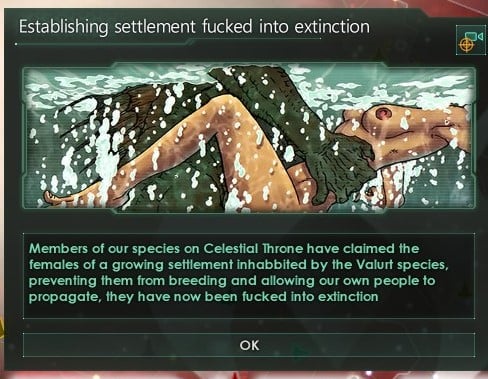 -fixed interbreeders being able to make hybrids with robot pops

-fixed all female event not triggering because I forgot to put them in the on_actions, oops

-Added 2 new traits all female and all male to be added by the previously mentioned events.