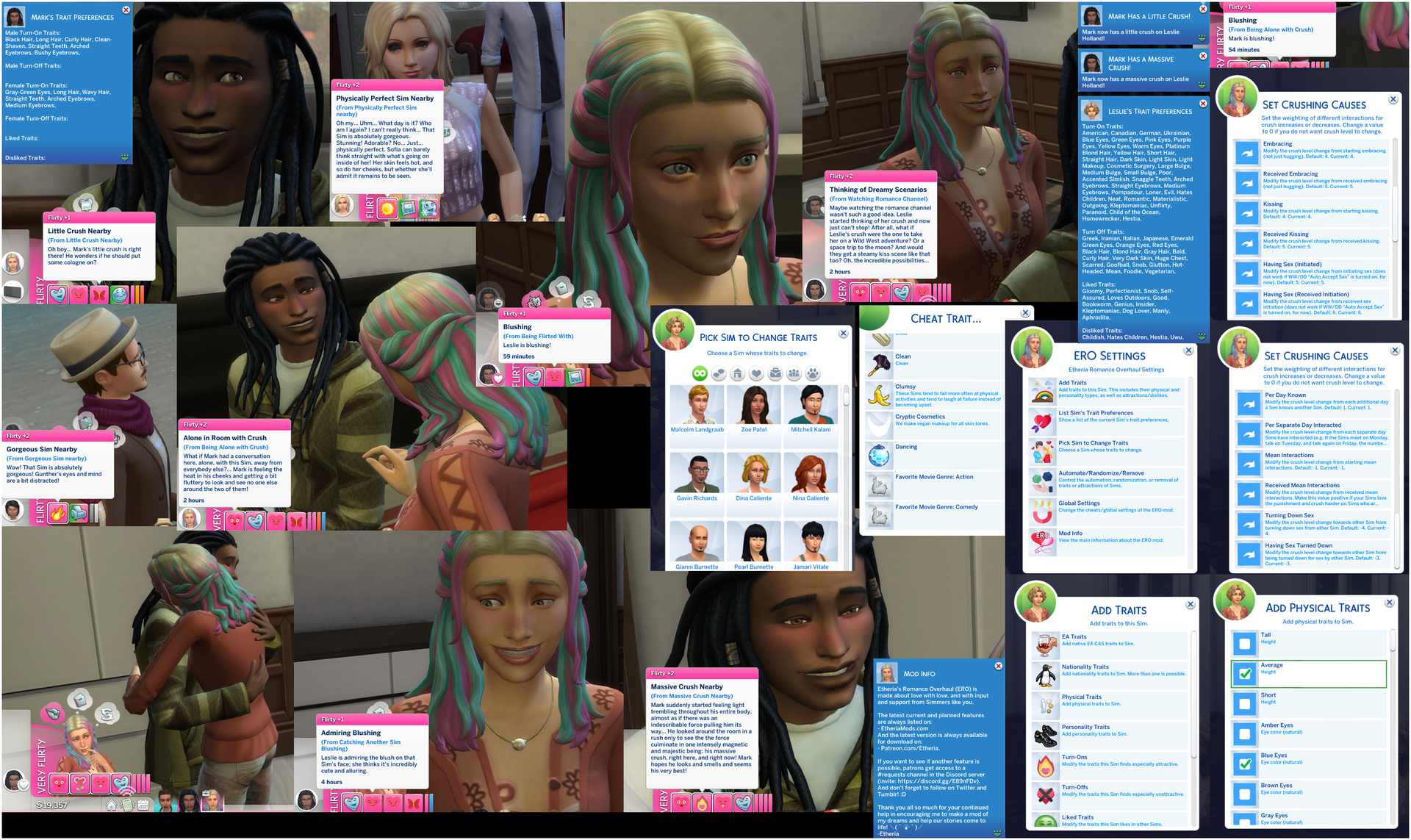 *NEW One-sided Crushing, Blushing, Sentiments, and Gender-Specific Turn-Ons and -Offs update!* ERO adds one-sided crushing, dynamic trait compatibility with other modders' traits, attraction, compatibility, new interactions, nationalities, and much more! Automate your Sim's physical traits from CAS, see how funny, how compatible, and how attractive your Sim views all other Sims, randomize everyone's turn-ons and -offs, enable or disable attractiveness buffs on your Sims, and much, much more! You'll have to try it to get a feel for everything that it can do! There are even more options available in the shift+click menu on each Sim for an experience tailored exactly to your liking, but I advise you don't use any of the big 2 "Force Recalculate" options (Attractions and Affinities) unless you're prepared to wait a bit for the data to be recalculated, dat computer of yours will have to do a fair bit of math!

This mod requires an update to version 1.69 or later of S4CL. If you don't already have it, please read the requirements section listed below in blue.


Compatibility is a priority in this mod; it is made to enhance the Sims experience and work harmoniously alongside any other mods like it. There are no known conflicts right now: that includes anything made by KiaraSims4Mods, Lumpinou, Turbo, KawaiiStacie, etc. If you do discover any conflicts with other mods, especially romance mods, please let me know and I'll check it out when I can.

Hi guys! I'm Etheria and I make mods! To that effect, the Sims is a game we know and love for its ability to engross us in making lives of our own full choosing and control, but let's face it: for many of us, it doesn't really feel real in certain aspects of the vanilla game. One of the biggest of these for me is the romance, or rather, the lack thereof! When Sims touch and kiss, they barely get closer to each other for more than a second! C'mon, who the heck hugs their partner like that?! Things like this mean it often feels like the game treats romance as a side-gimmick rather than a real and fully-fleshed-out part of life, and I find myself feeling dissatisfied with how the Sims I have who are supposed to be completely head-over-heels for each other are just...coexisting lukewarmly. I aim to be part of what changes that.

So I felt like creating a mod that makes romance a thing in the Sims that people can connect with, one that's best made possible through a unique union of code, animation, and storytelling, with a mixture of attractions, affinities/compatibilities, and opinions your Sim has to/about other Sims, among many other features! 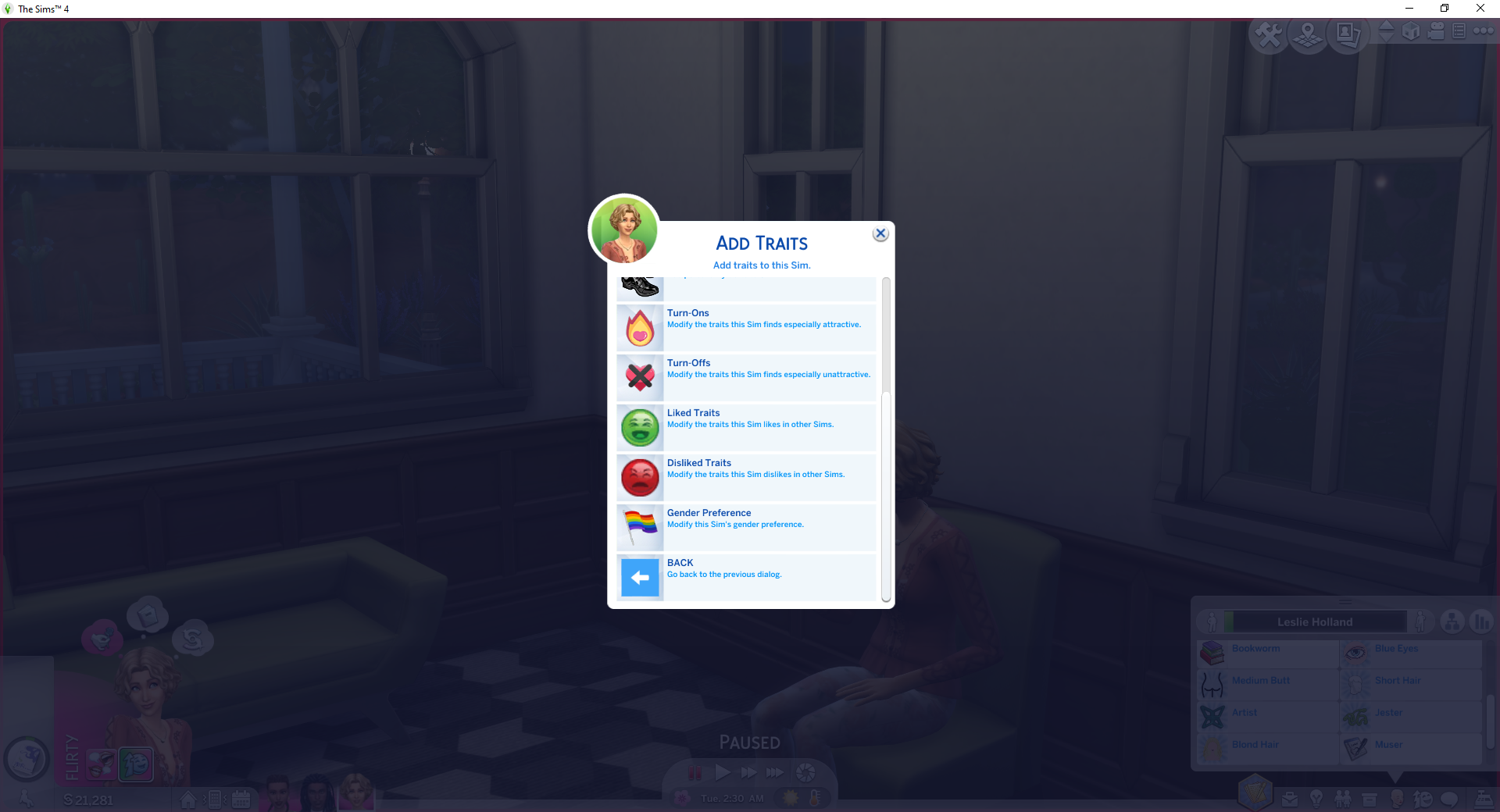 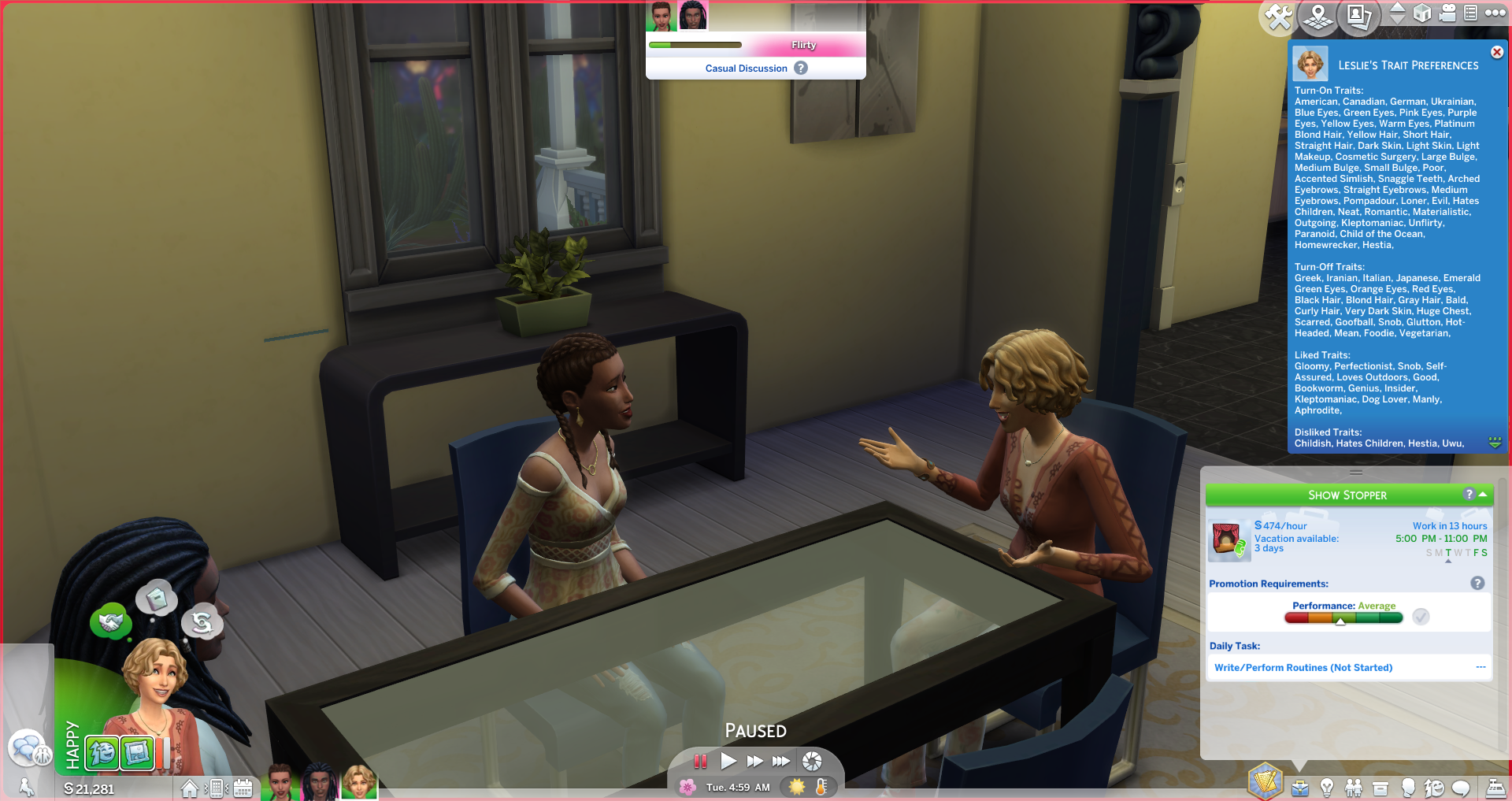 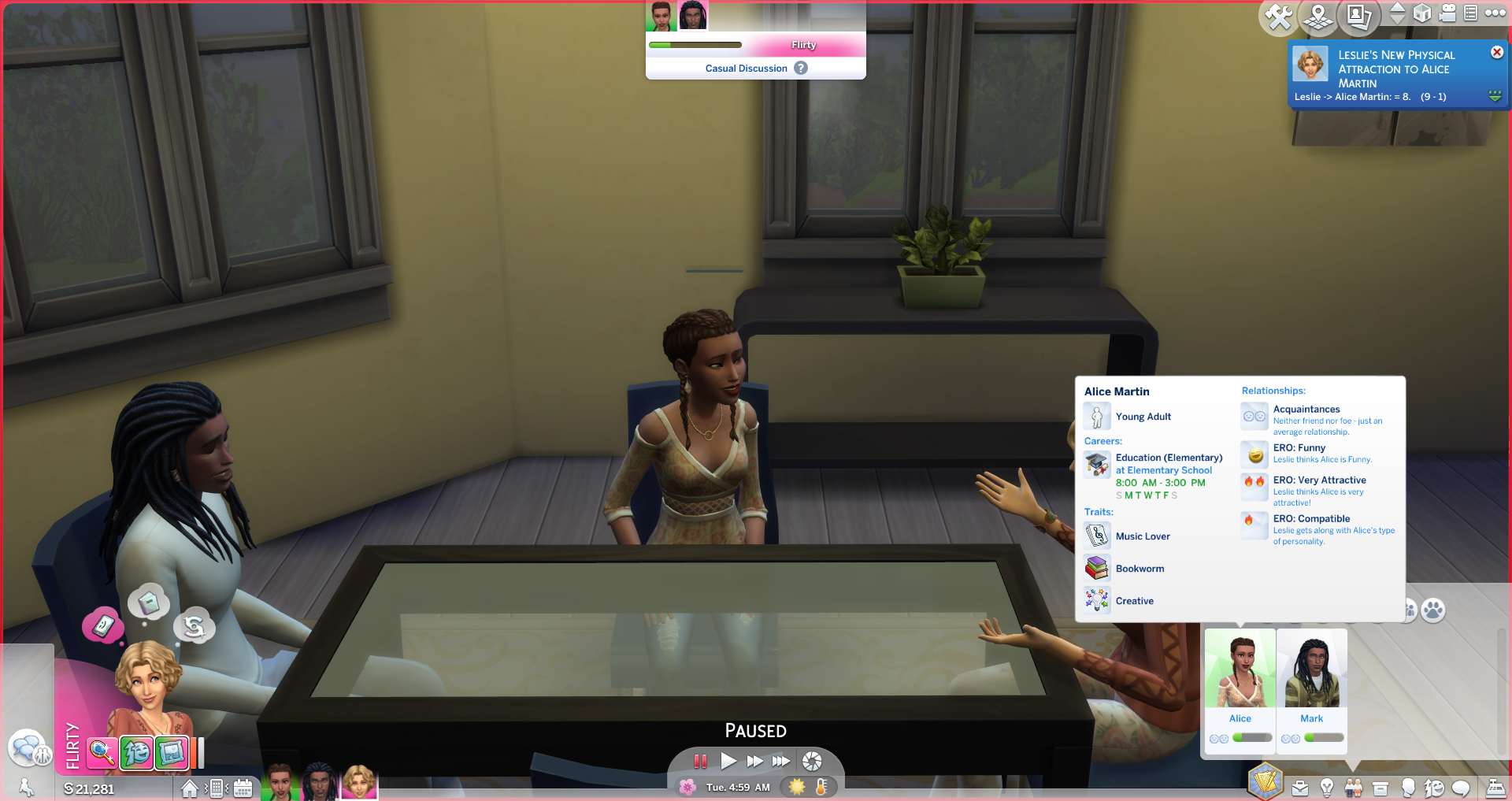 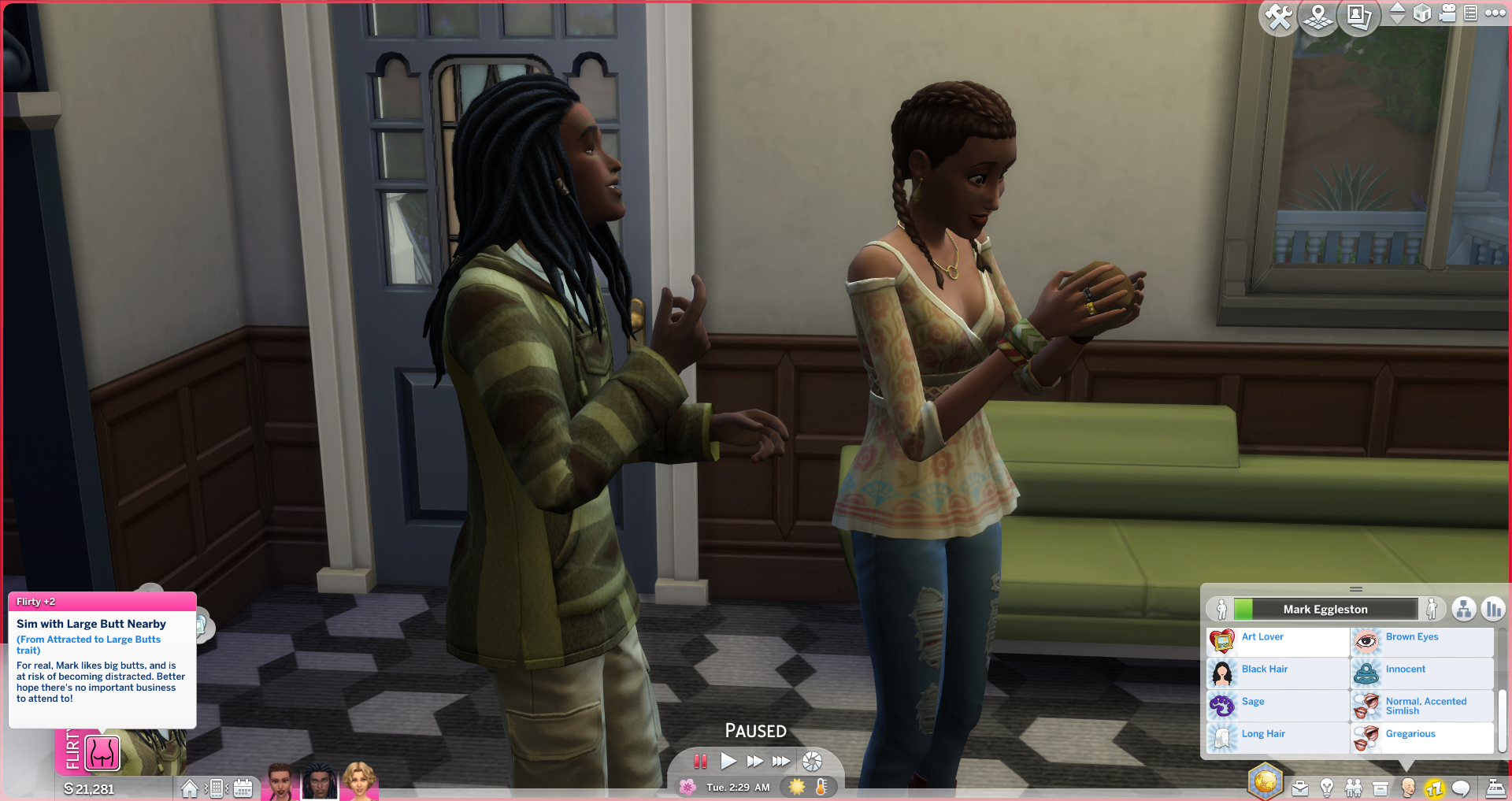 An attractiveness system based on both looks and personality, but also life experience!

Ever wanted to feel more attracted to the Sim of your dreams? What if a guy has gray hair and that's just not your thing? What if she's short (you didn't forget about height slider mods, did you?) and that's totally your thing (cute teddy-sized girls, amirite?!)? What if the Sim has kids and even though you're looking for a serious relationship, you're just not ready for possibly becoming a step-mom? Sorry Simdr date, you're great but that?s just too much for my Sim to handle at this point in their life!

Or if she's an airhead who spends half of her day talking on her phone and only ever wants to talk about her friends and makeup? Boorring.

That sweet introverted girl who is quiet to most, but opens up like a blooming flower when you start talking about video games? Totally your style.

The guy who takes a ridiculous amount of pride in his hair and his swag? Ooh, a bad boy's the one for you, eh? Your Sim has a high Affinity for that! Or at least for now they do!

Has your Sim dated 20 different Sims and their secret admirer is a complete relationship newbie? Well, maybe that admirer won't feel so warm towards you after finding that little piece of info out through the grapevine!

Want to know if a Sim has had their first kiss? Ask them! Want to know who that person was? You can ask them that too, but careful, they may not want to answer if they don't know you well enough or think you're a jealous and destructive person!

Or what if a girl's a homewrecker basically as a hobby, specifically seeking out men who are already taken and trying to Woohoo their brains out like it's some sort of winner-takes-all game? ...That would be kinda hot to some Sims, huh?

Maybe your Sim wants to try out that classic temptation vs. foundation in their love life only to regret it horribly later as they're forced by their spouse to tell their kids about their affair? Ddrrraama!
These are all examples of the kinds of scenarios you can insert into your game with ERO! You decide, with an attractiveness system that makes BOTH physique AND personality come into play!
(Seeing attractive features and personalities will make your Sim feel flirty. If your Sim sees someone who has a certain number of traits they find attractive, they will get whims to want to flirt with them!)

What can bring a romance to life more than ANIMATIONS, amirite?! Happily, I am not only a dreamer of what love can be, but also an animator! Thus, through connecting with the game's code, a huge chunk of the interactions I add will have their own custom animations. Let's get those snuggles, cuddles, and kisses to the next level, and make flirting feel real.

Ever wanted to have more than 3 traits on your Sim, especially since there are so many good custom content ones? Want your favorite trait to be included in the Attractiveness system? Me too! Included is support for some of my favorite traits to play with, the Greek god-inspired traits by PurpleThistles! You may play with different traits than me, so I'll start by supporting some of a handful of my favorites by other modders, but then will add support for the most wanted traits. This way you can add as many traits from your mod folder to a Sim as you want! Supporters can vote on which trait I'll support next. This requires you to make just one tiny modification to the trait in most cases (change the trait type from "PERSONALITY" to "GAMEPLAY" in Sims 4 Studio), which is a very simple process shown in this gif:

Note: Some of the Sims 4's tags are wildly inaccurate. For one particularly bad example, the game labels both red and purple eyes as "amber" eyes (I don't even

). There's more detail in the screenshots below, but right now the only fix is to set these strangely-tagged ones manually (full list in these screenies): 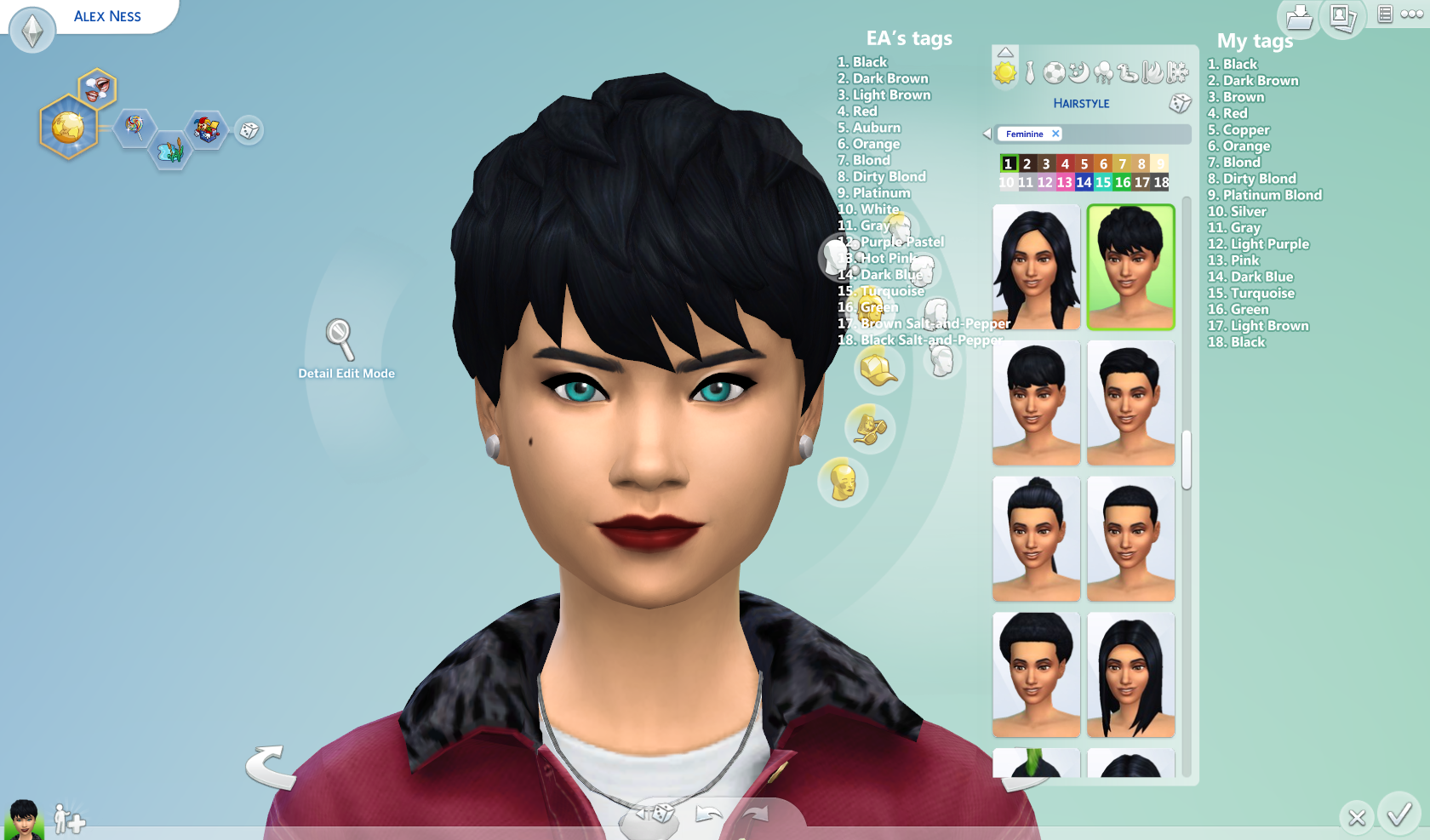 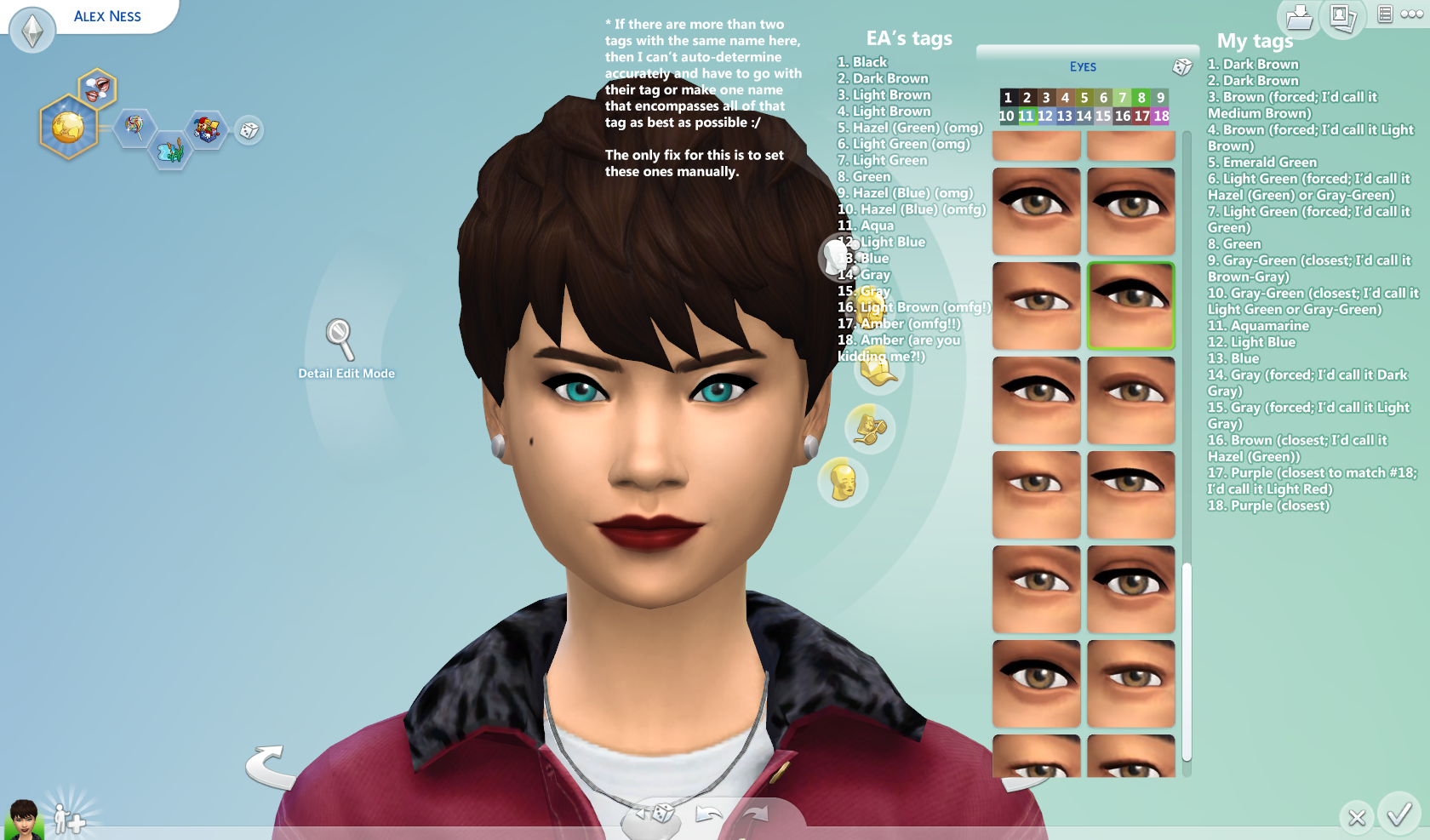 -Gave chingyu1023 their own separate section for traits in ERO to make them easier to sort through.
-Updated Russian translation by Origamika and Coregirl.

-Added support for chingyu1023's reward traits
-Prevented autonomy of flirting interactions from ERO.
-Reorganized the "Edit Male Preferences" and "Edit Female Preferences" section so it's clearer which set you're currently editing.
-Added Polish and Danish traits.
-Updated Russian translation by Origamika and Coregirl.
-Condensed interaction package files to save space and make translation much easier.
-Laid down some framework for a juicy future addition!

-Added buffs for your Sims around their crushes, and the ability to turn them on or off!
-Added quite a few other fun new crush-specific buffs like after watching the romance channel etc.; play around a bit to discover more!
-Added special buffs for being alone in a room with a crush!
-Added more settings to give you even more control:
Enable/Disable Crush Attraction Buffs
Crush Level Change Per Separate Day Interacted

-Added gender-specific turn-on and turn-off lists and settings surrounding them!

-And as usual, if you want your turn-ons and -offs to be copied over from 3.1, just go to the Automate/Randomize/Remove menu and click the "Copy Preferences Lists from Version 3.x" button to port them over! From there, you can modify them further for each gender in the "Add Turn-On Traits" and "Add Turn-Off Traits" sections!

-Added many many more settings to give you even more control, mostly related to Sentiments to lay the groundwork for ERO's next version, and also to enhance any other mods that use or will use Sentiments!

-Press the button in settings to "Copy data from versions 2.x"; your old ERO save data will donate its data to the new save structure and then empty itself. It feels so clean and makes me so happy! It's the kind of thing that makes a programmer smile!
-Added blushing. (If you want to use blushing only from other mods instead, just turn off ERO blushing with the added controls further down this list)
-Added one-sided crushes.
-Added new traits: Parent (auto-added to Sims with children), Low Standards, High Standards, Very Overweight, Overweight, Average, Underweight, Very Underweight, Muscular
-Added support for new expansion traits Proper and Adventurous.
-Patron vote: Added nationality trait: Swedish
-Changed "Successful Flirting" buff from Energized to Confident.
-Added new buffs!
-Added interaction "Force Recalculate All Relations to All Sims on Lot".
-Added interaction "Copy This Sim's Preferences".

-Added showing crush level at the bottom of the "Show Number of Started Interactions with Sim" interaction.
-Reorganized the ERO shift-click menu to be prettier.
-Fixed nationality traits not showing up in the turn-ons menu.
-Huge performance improvements and code cleanup.
-Added optimization settings so you can change how fast the code runs depending on your preferences and computer power.
-Added many many more settings to give you a great deal of control:
Enable/Disable Attraction Buffs
Attraction Respects Gender Preference
Ask to Flirt Back
Change Attraction Thresholds
Change Affinity Thresholds
Blush Only from Crushes
Blush Only from Hotties
Enable/Disable Males for Blushing
Enable/Disable Females for Blushing
Enable Blushing Whitelist
Add/Remove Sim to/from Blushing Whitelist