Things didn't go exactly how I wanted on my first official assignment as a member of the Imperial army, but as these things go, it wasn't too bad. Because getting captured and raped by only one man counts as a nearly pleasant experience.


First, let's talk about armor. Here's the thing I discovered about the armor in this Skyrim: it has been enchanted by illusion magic. No, really. I was pleased when they handed me my official armor. It seemed to be a full set - no gaps, no holes, no bikini. As soon as I put it on, though...well, parts of it just...vanished. Or, rather, turned invisible. They were still present - if you tried to touch my exposed midriff, your hand would stop a few inches short and you would find you were touching metal - but they are enchanted to make certain parts...disappear whenever a woman wears them. The fun part - if you want to call it fun - is that there is no way to know until you put it on what parts will be visible. Some only show small bits of thigh or shoulder. Some look like the sluttiest thing you could order from Frederick's of Hollywood. My Imperial armor was slightly closer to this last, but I have seen far worse. 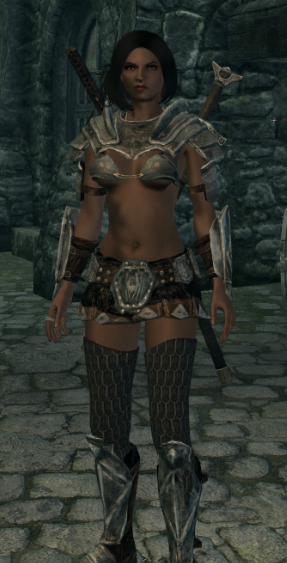 Anyway. Once I donned my new uniform, Rikke let me know what she wanted me to do.

"If you wanted to march, you should have joined the line. You're going alone."

"Yes, ma'am. Where am I meeting the company?"

"Yes. Um...legion? Phalanx? I apologize, I don't know your...I mean, our terminology yet."

"You misunderstand. You are now in the Imperial Special Forces, soldier. With your position comes some perks. You are, for instance, an officer. It is the lowest officer rank - Auxiliary - but it still outranks seventy-five percent of the members of the Imperial military. Tell any of them what to do and they will do it. This also means you get your own officer's tent in the field and a reserved indoor bed at any Imperial garrison, not to mention a healthy salary.

"But the job you signed up for - and remember, I tried to talk you out of it, so you have no one to blame but yourself - is to take care of issues that need doing but that we haven't the manpower to pursue."

"Such as clearing forts by myself."

"Such as clearing forts by yourself, yes."

I sighed and eyed the door. Maybe the line wasn't so...

"It is too late to volunteer the other way now. Refusal to do a job would be viewed as..."

A pause before she raised an eyebrow. "Yes?"

It was along the north coast, not in a great strategic position to use as a fort for a war coming from the other direction, but certainly a fantastic place for enemies to strike at our back when we were facing said other direction. I'm not sure what I would have done had it been in a different place, but fortunately it was situated right beside a cliff and had a back door (actually, there wasn't a door there, just the rotting remains of an old one) that popped out right at the cliff. A lot of bandits got to try their hands at flying that day. None of them had a knack for it.

The interior of the buildings made for a different story - we actually had to fight. Fortunately, these particular bandits were not particualry strong. They looked almost malnurised, in fact. I would have given them a chance to just leave peacefully had they given me even a moment to speak, but after one look, they jumped at us and were quickly cut down. Soon, in order to save some time, I suggested that we split up, so Lydia went to the next building while I continued on. I used my shouts liberally to knock people back, then rushed forward to stab them. Not very sportsmanlike, as Andre the Giant's character in Princess Bride (Fezik? Something like that, I think) would have groused, but it worked.

Mostly. The problem with these old buildings is that they have all sorts of nooks and crannies, some of them intentional, many of them coincidental. I didn't see the guy hiding behind a shadowed pile of rubble until he had already sapped and stripped me. I woke up to find him planked over me, his dick already pushing its way into me. His hands locked my wrists on the ground above my head and he leered as he saw my eyes flutter open before shoving his full length into me.

I was not afraid. I have been raped and abused so long and so many times that this felt almost normal. I say "almost" because...well. I did feel something. Not something I ever would have expected. Just the tiniest trill of...I don't know. Excitement? That's not quite right, but for a brief moment, being pinned down while this man had his way with me turned me on.

Just a little. He had done a poor job of making sure there was enough spit to keep us lubricated and my moment of psuedo-lust was subsumed by a sudden burning pain. I opened my mouth and shouted and his naked body flew away, horizontal to the ground (wrenching my shoulders as he went - he had a pretty strong grip). I heard the sound of his legs breaking when he slammed feet first into the wall.

I took a moment to lay my head back on the ground and just breathed while thoughts and emotions did a tango in my head. Was I starting to enjoy being raped? My body had conflicting opinions on the matter and after a long moment I decided that this wasn't the time or place to try to work it out and climbed wearily to my feet. My shoulders ached and I hugged myself as I stepped over to my attacker. He looked up at me with tears in his eyes and it wasn't until that moment that my ears registered that he was screaming in pain. I glanced at his bent and broken lower body.

"Too bad," I told him as I spied my armor and equipment nearby. I stepped away to grab my dagger, then crouched in front of him and looked him in the eyes. He quieted a bit. "If you had thought to gag me, we might have had some fun. Apparently. I think something's wrong with me. Do you happen to be a psychiatrist?" His gaze took on a confused cast and I shook my head. "You're right. Too much to expect. Well. Thanks but no thanks for teaching me something about myself that I really didn't want to know. Bye!"

His eyes widened and he looked as if was going to protest, but time was beginning to press and I had to get dressed before his friends (or Lydia) decided to try to find him. I shivered a little at the thought of several...no. Stop it. I stabbed him in the eye and waited for his gurgling and shaking to stop before I wiped off the blade and stood.

There weren't many of his friends left, but they were well hidden, so it wasn't until late at night that I decided that I had managed to find enough of them to consider the fort cleared out. The chilly northern night air was like a slap across the face as I stepped back outside, and I breathed in the cold like a man who had been drowning sucks at air when he reaches the shore. It cleared my head, erased the confusion that had settled like a malaise over me, and I met back up with Lydia and left the fort with strong steps. It had just been my imagination, sprung from my broken mind from my years of captivity and abuse. It meant nothing.