Came up with a couple of aesthetical experiments you could try when making a character (or modifying an old one).

Obviously, beauty's in the eye of the beholder. These methods may or may not still result in good-looking faces by your standards. It all depends on what you're doing, how you're doing it, your own tastes, etc.. But the whole point of an experiment is to find out if it works, and it's entirely possible you'll learn some new methods for making faces doing this even if you don't agree with everything i talk about. This is more about learning to be flexible, broadening your horizons as it were.

So let's begin. First topic: Facial proportions. You might be familiar with the golden ratio of facial proportions, the "ideal" proportions, here and here being examples, and here for a more in-depth explanation of it being applied to CGI models. Now, the ideal proportions are all well and good, but the thing with human faces is there's still a lot of diversity. Weak/strong chins, eyes too close or far apart, big/small ears, stuff can be higher/shorter than the ideal, accounting for whether they're in shape or letting themselves go a bit, and so on and so forth. And that's just within the same ethnicities, let alone when comparing different ones.

Sure, there's certain proportions like the height:width ratio of the skull that only vary slightly, certain stuff is similar among faces, but there's still room for variation. Take this for instance. Pretty distinct differences from the golden ratio, wouldn't you say? Just look up faces on Google Image or something (and ignore the obvious "ideal" ones), and you'll see how there's a lot of variation. Not everyone conforms to the average.

So what's this first experiment? Intentionally shy away from the ideal proportions. Keep them in mind since they are realistic proportions, but branch out and incorporate other facial features that, while not the golden ratio, still fall within realistic extents. Loosely drag some sliders around rather than tweaking them step by step. Move random sliders to shake the face up a bit. Intentionally make an imperfect face. Make it imperfect and still look good on its own merits, and then leave it at that, resist the urge to tweak it to perfection and undo the whole point of this experiment.

There, you've just made a face with character, with flaws, uniqueness. You've made a face that's a little more recognizable in the sea of the more "ideal" faces, done something other than "generic pretty face #13208" and can stand out more. Granted, this is Skyrim, there's going to be a certain amount of inevitable stylization due to the base shape of the models and such, but you can account for that and still have something realistic enough.

Yes, it's that time. Time for me to shamelessly plug my own stuff to use as examples 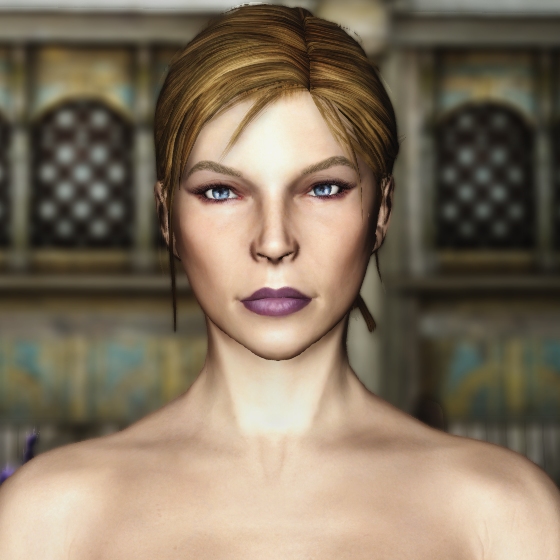 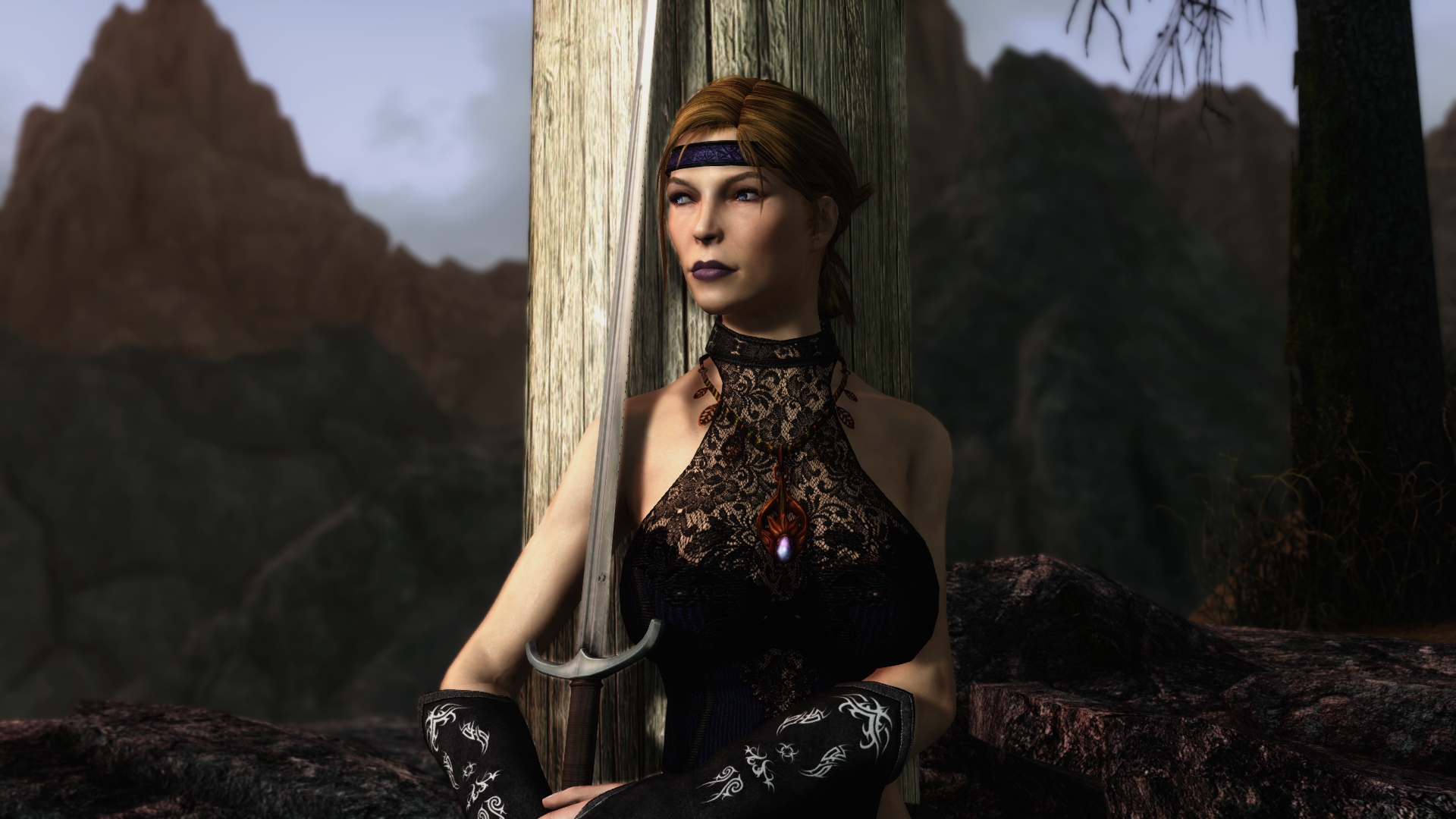 So, my first - and still main - LL character, Maja. There were specific reasons (that i'm sure i'll talk about another time) i didn't put a ton of effort into her face, didn't micromanage every slider value, but that ended up influencing how i made her face and how i've made faces since, and is why i haven't changed her physical facial structure one single bit since i first created her. I intentionally played it loose when making her, my entire plan was basically just "mature Nord woman". That's it. No specific features in mind, i didn't intend to make her look like anyone in particular (though her features are recognizable reminiscent of real people i know of, which tells me i still managed to make her halfway realistic), it was literally just "mature Nord woman" and see what i come up with as i go.

Early in the process i added "keep in some imperfections", since the whole point was i was sick of the unrealistic perfect anime waifus everywhere and wanted to make someone that stood out from that. Her eyes are ever so slightly wide-set, she has sharp european features (being a Nord, after all) - as opposed to a softer, some might say more "feminine" face - which may or may not be to your taste, you can see from side shots that she has a weaker chin and nose, probably other stuff i can't think of off the top of my head. Hers is not a perfect face, doesn't conform to the golden standard, and i knew that at the time, it was intentional. My intent was not "perfect beautiful face", it was "imperfect face, still beautiful", and i like how she turned out with that methodology, just as i like how all my character's faces turn out with that methodology. It's fine to tweak a couple things in detail here and there, but i specifically avoided conforming to the ideal too much. Maybe my eye's just untrained and biased, i don't know, but Maja looks plausible and realistic enough to me even accounting for Skyrim's minor stylization. As i said, i recognize similarities to real people i know of, and that's good enough for me.

Second experiment: Makeup. Or more specifically, a lack thereof. The thing with makeup is, it's a tool. It has a specific purpose, and ideally you want to be efficient with it, using only what's needed for what you're going for. Using the least to achieve the most. If you just pile on a bucket of it and call it a day (cough cough most pornstars), it almost never looks good to me, it looks fake as fuck, not to mention that can't be good for your skin going around wearing that much. Makeup is supposed to accentuate your face, not the other way around. The secretary of the face as opposed to being the public speaker, if that makes sense.

So the experiment here? When making a face, try starting without any makeup whatsoever. Go in and move the respective sliders to 0 (might have to toggle them right then back left) or just put the tint's alpha to 0 yourself. Totally free of any makeup, any tints other than the base skin color itself. Now work on the facial structure and such from there. Only when that's done, then you can get to the makeup, and avoid changing the facial structure any more at this stage, forcing you to make the makeup work for the face.

To me, a good face isn't just one that looks good with makeup on, it's one that looks good even without makeup, so then the only purpose for makeup from there is to simply accentuate and add other colors. Not trying to mask how the face normally looks, just expanding upon it. Maybe i'm just a sucker for natural looks, i dunno, and i'm well aware that some "natural" looks do indeed take just as much makeup as more obvious looks, but the key word here is "obvious". If it looks like you're wearing a lot, it kinda turns me off.

With Maja, it's basically just lipstick, blush, eyeliner and some shadow, and done. And even then, aside from her lips the colors aren't really glaring and blatantly standing out, her lips are about the only thing that do stand out like that and that's just because purple's kind of her thing. If i took (read: could be bothered to take right now

) a makeup-less pic of her, there wouldn't really be that much difference, it'd still be quite recognizably Maja.

So yeah. Try avoiding conforming to the ideal standard, and try starting without makeup and only later adding it as a final thing. This isn't to say it'll result in "better" faces or even "good" faces, not to mention tastes vary, so on and so forth. The point of this is not necessarily to improve your technique per se, but to expand it. it's giving you ideas, showing you other ways to make faces that may or may not work better than your normal method, but at least may or may not have certain merits and aspects you can incorporate every now and then to change things up.

And seriously, feel free to comment, discuss etc., whole point of these is to bring up topics and methods i don't commonly see talked about.