By rights, I should have died. Or at least have broken a limb or two. But whether it was because Sanguine wasn't ready for another visit so he protected me or just because of sheer dumb luck and just enough ledges and rocky outcroppings to keep my fall from reaching terminal velocity, I landed in a pained heap at the bottom of the cliff with nothing worse than a few more bruises. I laid still after I landed, hoping that my captors would see my body and assume that I had died. Even if they thought I might still be alive, it seemed unlikely they would follow my foolish route and it would take them some time to follow the path down and around.

In short, I was pretty sure I was safe. Or, as safe as one can be in a place filled with man-eating wildlife and men who were demonstrably only too happy to find a naked woman alone in the wilderness. After a few minutes, I climbed to painful feet and limped my way to the river. Riverwood beckoned from the far shore. I could see the bridge across, a half-mile downstream, but I knew the water at this point wasn't very deep. The water was cold, but I had just been in the snow, so it felt nearly warm. I plunged it and quickly cleaned myself as best I could, washing away the dried blood and the dirt from the fall while wishing I could cleanse my insides just as easily, then waded across.

I got some odd looks as I came out of the water near the mill and stalked naked through the streets to Alvor's house. He had just come out to begin work at his forge, but took one look at me and hustled me inside and gave me over to the care of Sigrid. I spent the rest of the morning in their bed and I have rarely been so comfortable as I was then, with Sigrid fawning over me like a sick child. I curled up and cried myself to sleep.

Hadvar ruined the moment by bringing me a healing potion. It removed nearly all of the pain and turned the myriad of shallow cuts to a maze of light scars. I felt instantly energized and got up despite Sigrid's admonishments. Alvor, being a blacksmith, had the things I needed to get back to what I had set out to do, so I borrowed steel armor (which, in keeping with this new, sluttier version of Skyrim, had no leg guards - the bottom half was basically a metal thong, leaving my ass cheeks loose and free. Plate armor Daisy Dukes. No one else, even Sigrid, seemed to think the style was odd in the least). 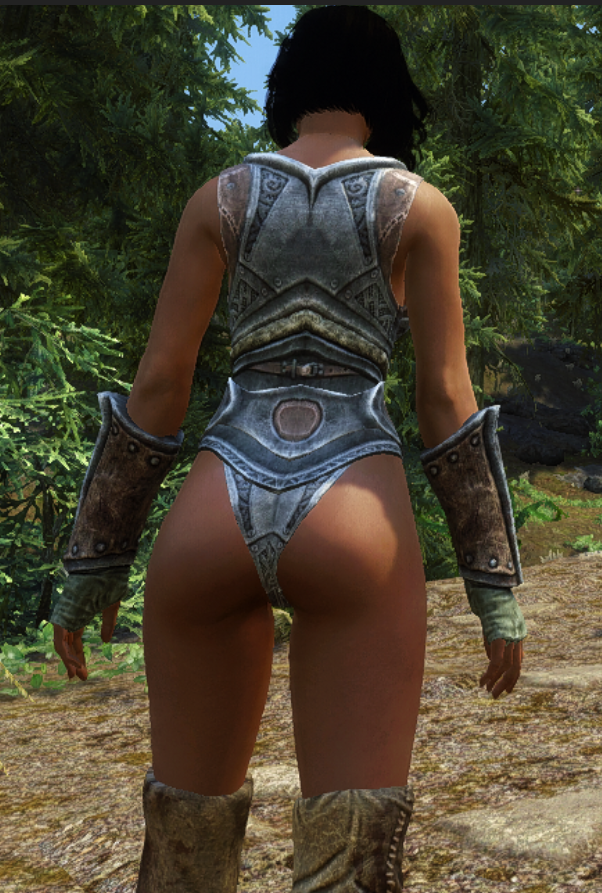 They also gave me an iron sword and boots and, most importantly, a really nice bow. This was not one that he had made - it was an heirloom from a bygone age. It seemed to hum with an energy of its own, and I still consider it one of the highest compliments of my life that they chose to entrust it to my care, especially when they knew that I had just been captured like...well, like the unseasoned rube that the bandit bitch had accused me to being.

So it was that, early the same afternoon of the day I had made my suicidal escape, I found myself huddling behind a rock with the tower in sight, bow in my hands and a hundred steel tipped arrows in my quiver. It did not take long for them to come out of the tower, and as soon as they did, I began firing.

Now, normal people would have gone straight back into the tower when they discovered they were under attack. But Nords are not normal. They immediately began searching for their assailant, which gave me plenty of time to keep shooting at them. My aim was terrible - I was a little too far away, and while some of the arrows landed in their vicinity, none of them struck. I eased out from behind the rock and moved forward several paces to a tree and began again. This time I could see them more clearly, but the movement had also told them where I was. A race ensued - they charged down the path toward me while I shot at them. The bitch went down about halfway to me and I laughed as she landed on her face and laid still. The man made it close enough to recognize me. His eyes widened even as he brought his sword over his head in preparation for a strike that, had it landed, would have cut me in two. He never got the chance - a double-handed fire blast finished the damage the arrows had begun and he crumbled to the ground. His sword clanged to the ground before sliding through the snow and over the edge of the cliff.

I checked for a pulse, but he was truly dead. The bitch, unfortunately, was also dead. I would have liked her to know that it was me who had killed her. Ah, well.

I began to walk up the path, then realized I was making the same stupid mistake I had made that very same morning, so I moved to the side of the path and slipped as stealthily as I could from boulder to tree to outcropping, edging my way forward. Naturally, the precautions were useless this time as nothing stirred from the tower. I entered and eyed my own dried blood on the floor for a moment, then began to loot the place. I found some coin and some food but, oddly, my own gear was gone. I hadn't had much, it's true, although there had been a few hundred septims that I already missed. The other thing I found was the third bandit, who was asleep in the upper chamber. I bonked her over the head with an iron skillet just as she woke up and she collapsed back to her sleeping furs with a bleeding goose egg on her head but also still with breath. I don't hate all bandits. Just the ones with penises. And the one who torture me for no good reason. And the ones who torture me with good reason. And the ones who stand idly by while others are torturing me.

But not all of them.

Once I cleared the tower of anything useful, I continued up the path. I took the occupation of the tower as an indication that the barrow would likewise fail to be exempt from hostile forces, and for once I was not disappointed - the area in front of Bleak Falls Barrow was crawling with bandits. I wondered briefly why they chose such an odd location for a camp until I remembered Ralof's stories of his childhood and how the barrow used to keep him awake at night, and I realized that this was actually a fantastic place for bandits to establish a base - an easy path to both the Riverwood and Whiterun sides of the mountains that would have been a well-traveled road except for the creepy barrow that the superstitious Nords avoided like the plague.

Although, is it superstition if the place actually does have animated dead things roaming its halls?

Anyway, there was no way I was going to be able to fight my way through this have of bandits. Even at my peak form, I would not have been able to do so (barring the combined gifts from Dibella and Molag Bal (or Debbie and Molly, as Sanguine would say), which would have made very short work of the lot of them. My body had a brief pang of lust at the memory).

This is where my previous life's knowledge came in handy. I knew that there was a giant's camp just on the other side of the mountain and my brief moment of luring the Whiterun raiders toward the giant (and the Companions) gave me the inspiration to try the same thing, only in reverse. I snuck past the barrow and descended the other side. Only one of the giants was home, but it was enough. I strolled into the camp, ignoring his warning rumbles, walked up to the huge basket of food they always kept by their pyre-sized campfires, and took a piece of bread.

"Thanks!" I said as I cheerily took a bite. He roared and began moving, and I dropped the bread and sprinted.

It took a little bit more doing than I had expected. I led him up the mountainside, but he gave up about a quarter of the way there and turned around after a final angry roar.

Sorry, that's not good enough. I took out the bow and shot him. I was aiming for his shoulder but my aim still needed work and it hit him square in the back instead. Not that it mattered too much. His roar rebounded off of the cliffs and he turned back and redoubled his pursuit. It was nearly my undoing, because he was much faster than I, and I was actually thrown into the air at one point from the force of his club slamming the ground behind me. I got lucky in that instance, because it actually vaulted me to the switch-back path above, thus putting me farther ahead of him. I shot him from above and ran again.

When we got to the top of the mountain, he was close behind me. I pelted toward the bandits shouting, "Giiiiiaaaaaannnnnt!" then continued right through their midst. What followed was a pitched battle between the giant and the entire bandit camp. I was only stopped once, but an archer further in, but before he could say anything, I pointed and shouted, "A giant is attacking! They send me to send everyone! Hurry!" He gasped and sprinted away, and I entered the barrow with no further trouble. Once the door closed behind me, I sank to the floor and just shook for a bit, not daring to believe that my gambit had worked so well.

Don't feed the bastards. Feed yourself instead.